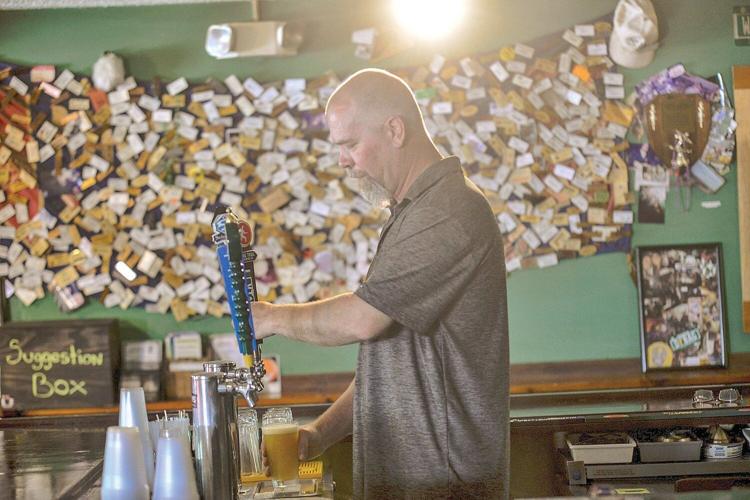 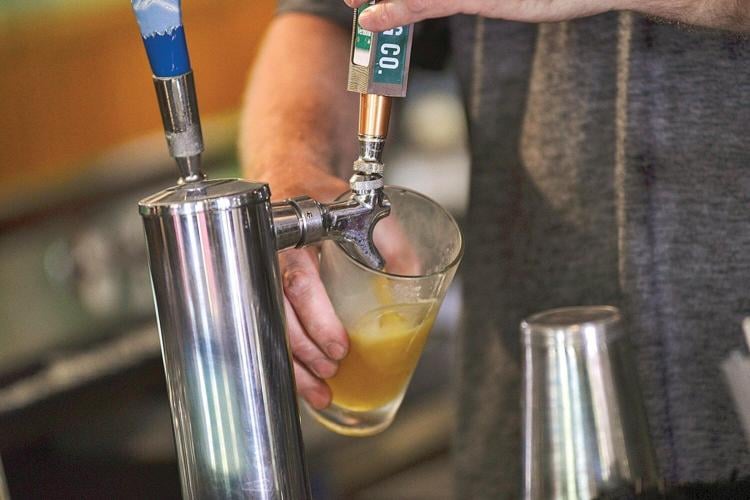 WEST DOVER — Jason Hathaway served his first drinks at Dover Bar and Grill about 18 years ago after offering to cover a shift when all members of the infamous dive bar's regular staff would be attending a wedding.

Bartenders came in with the wedding party and told him where to find the bottles for mixed drinks. He was asked to join the crew a month later.

Almost two decades later, Jason and his wife Melanie Hathaway took ownership of the bar a week before Christmas 2018. Sited along the Route 100 corridor to and from the Mount Snow ski resort, the winter kept them busy until April.

Later this month, the couple will be married for 13 years. They knew each other, but started hanging out more after meeting in the bar. They had their wedding after-party there.

"We spent a lot of time here, bought a house across the road from here," Melanie said. "Guess we were meant to be here. Full circle."

Melanie said Behringer was "great" in helping the couple figure out operations.

"The whole time, he was just grooming me to take over," said Jason, who told Behringer he wanted the right of first refusal if he ever decided to retire. "We actually put this plan into place three years ago."

For Jason, running a place like Dover Bar and Grill had always been an interest.

"It's a cornerstone of the community," he said. "We're the last place with reasonable prices for locals so I figured we had to keep the tradition going."

Jason worried another owner might not have maintained the integrity of the establishment. Melanie said Behringer ran the business successfully for almost 30 years.

"We want to make him proud," she said.

One of the couple's goals is to make the bar friendly to local patrons and those from out of town. They plan to keep the prices down and Vermont-made beers on tap.

A new grill and fryolator has been added to the kitchen.

"We're going to stay in the finger food territory," Melanie said. "Just because it's a dive bar doesn't mean it can't be homemade. People have been loving these stuffed Cuban breads Jason has been making."

Food is available for prices between $2 and $9 until 1 a.m. Jason said town elders and the police department let out "a collective sigh of relief" when more items were added to the menu because it provided more chances for customers to sober up.

Ax Wednesdays — in an outdoor area lit by bamboo torches Wednesdays from 5 to 7 p.m. — have been popular among females. Jason said about 75 percent of those throwing axes have been women.

His dad is "really good at instructing," Melanie said, "and people are really grateful to have the guidance."

Ax-throwing sessions began in the middle of July. The couple hopes to create a league at some point.

"Right now, it's so foreign to people," Jason said. "It's more of a curiosity."

Another outside activity is "fowling," which combines football and bowling. Jason said it started at tailgating events in Michigan. Bowling pins are set up and a football instead of a bowling ball is used to knock them down.

In September 2017, Dover Bar and Grill was named the number one dive bar in Vermont by Thrillist.com. The website called it "a boozy oasis good for a cold beer, a belly-warming whiskey, and a hot meal morning, noon, and night."

"Despite its mountainside locale, the place is more finished basement than apr s-ski lounge, with chatty bartenders mixing dirt-cheap drinks amid foosball and pool tables, a wall littered with old lift tickets and retired ski-resort employee name tags, and a DJ booth for some weekend entertainment," the website says. "Don't let the craft beer pilgrims and crunchy co-op shoppers fool you — this is how real Vermonters drink local."

Melanie said the plan is to maintain the ski resort vibe while keeping prices affordable for everyone.

"We figured Michael had a business plan that worked for 30 years," Jason said.

Behringer could not immediately be reached. He is also known locally for owning the now-closed snowboard shop Bonkers Board Room and teaching at Mount Snow Academy.