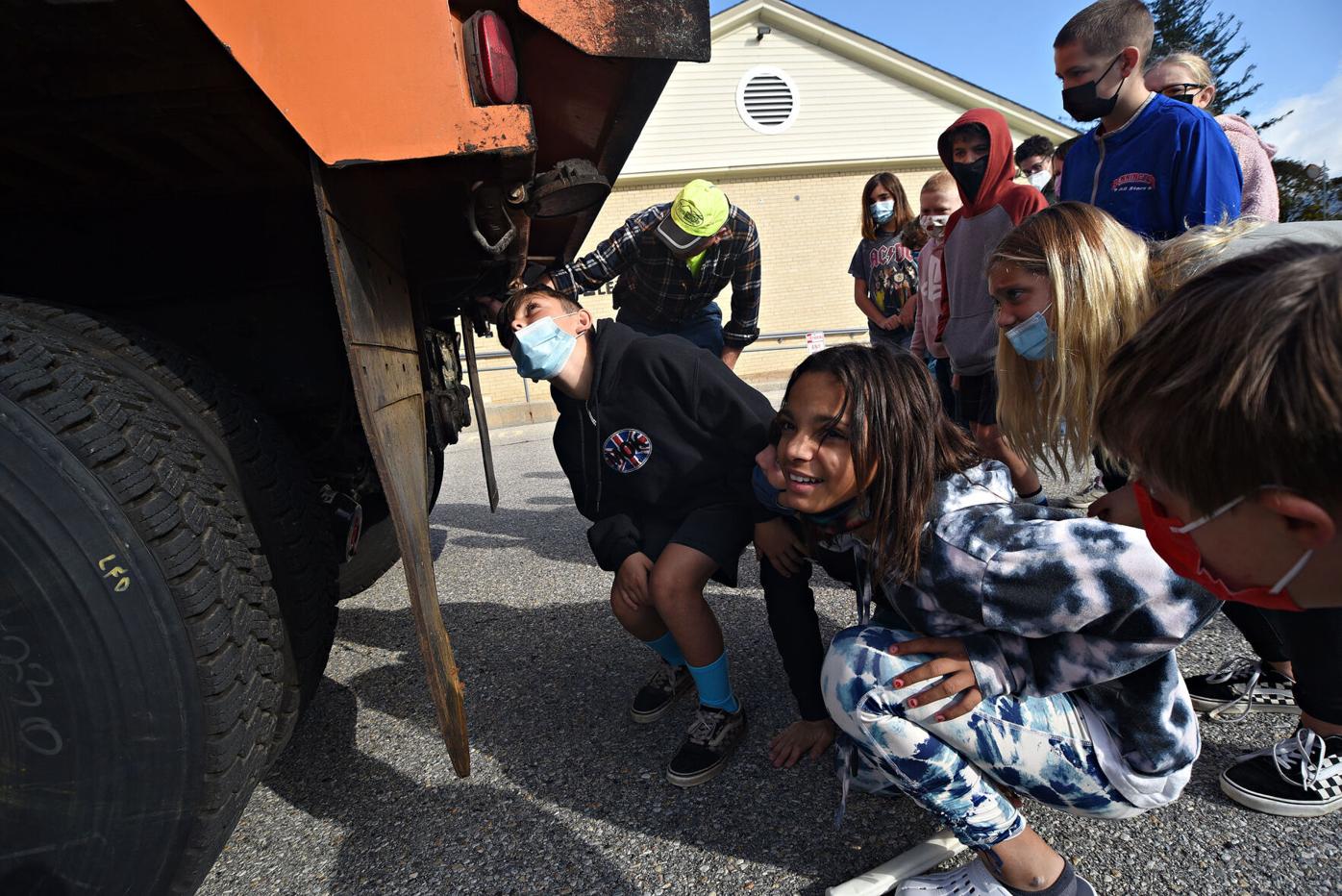 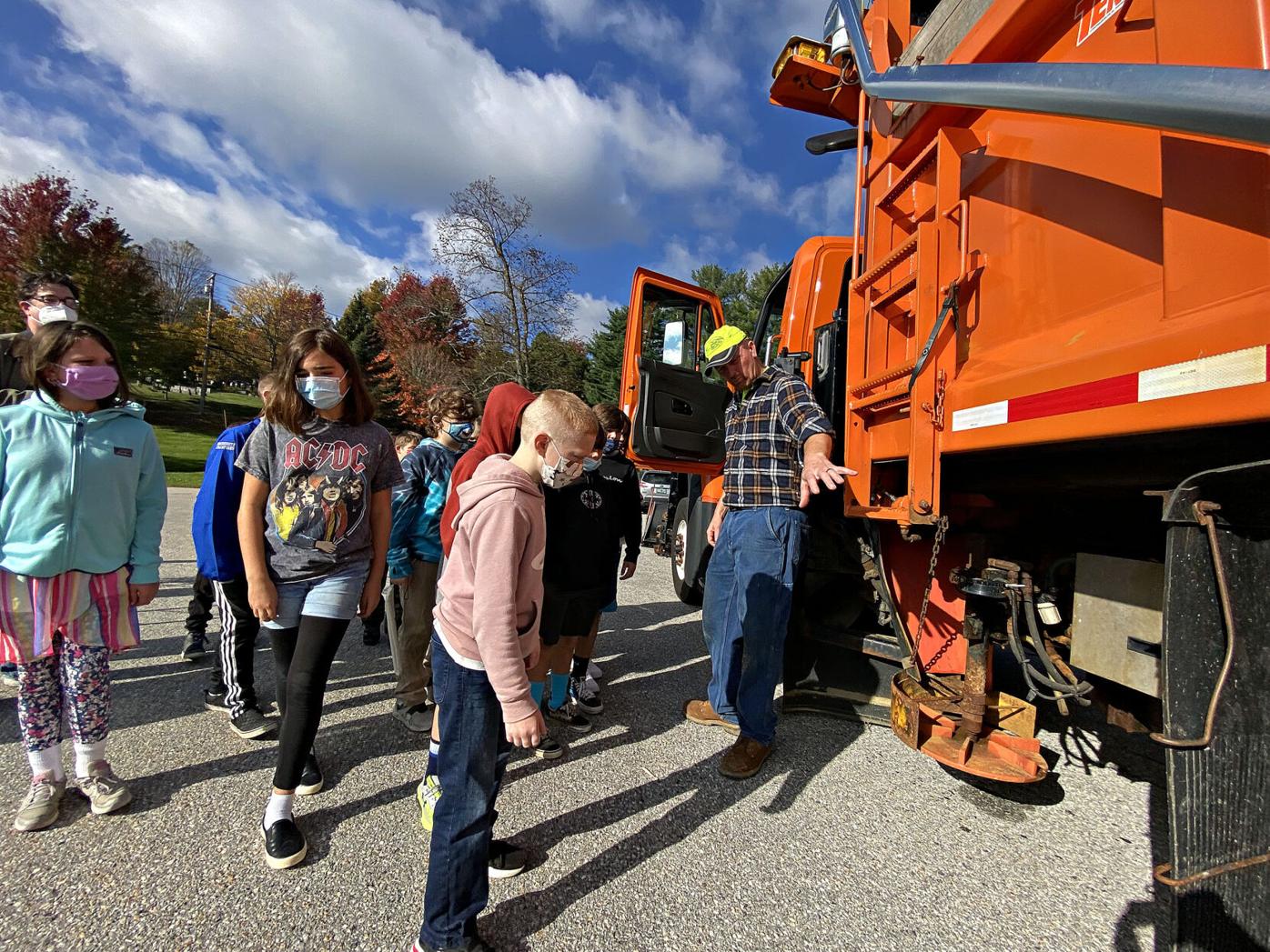 CAROLINE BONNIVIER SNYDER — BENNINGTON BANNER Mike Pierce talks with fifth grade students at Monument Elementary School in Bennington about the snow plow he drives, outside the school on Wednesday morning.

CAROLINE BONNIVIER SNYDER — BENNINGTON BANNER Mike Pierce talks with fifth grade students at Monument Elementary School in Bennington about the snow plow he drives, outside the school on Wednesday morning.

BENNINGTON — Which of 16 names will grace the snowplow Mike Pierce operates for the Vermont Agency of Transportation?

Will it be a seasonal favorite, such as Snowflake or Blizzard?

Perhaps a proper comic book hero name would be fitting, such as Ice Lightning, Snow Buster, or Cold Cutter?

Or perhaps something more fanciful, like The Snow Cone or Icy Hot?

It’s up to the students of Monument Elementary School. They’ll go to the polls today — with an assist from Bennington Town Clerk Cassandra Barbeau, who lent the school a surplus voting booth for the occasion — to choose a name for a bright orange VTrans plow based in Bennington.

It’s part of VTrans’ inaugural “Name a Plow” contest. The state announced earlier this month that all 250 plows in the state fleet would be matched with schools, and students given the opportunity to bestow them with appropriate names.

Other schools in the SVSU are getting in on the fun as well, said Katie West, the public information coordinator for the SVSU. She said one name suggested at Pownal Elementary School made everyone chuckle: Mr. Pushy. Also on the Pownal ballot: Plow Bunyan and Snowstorm.

Wednesday at Monument Elementary, Pierce, a master operator technician in VTrans’ Bennington garage, pulled the big, bright orange truck — there’s really no other way to describe it — into the front parking lot and took students from kindergarten through fifth grade on tours of its features and capabilities.

Is he rooting for any of the proposed names? “That’s tough,” he acknowledged. “There’s a lot of good names on that board.”

Principal Donna Cauley said each class at Monument submitted two names and the faculty suggested one. She said students got a better understand of what Pierce’s job is like in real life, “and how they can support him on the road,” in addition to getting a better understanding of how democracy works.

“Our learners now know when you see big plows on the road during our weather you know how important they are,” she said.

Regina Church’s fifth-grade class had the honor of checking the plow out for themselves shortly before 10 a.m. Pierce took the class around the truck, explaining how it dispenses crystal salt and brine to roadways, and how sensors in the truck can tell VTrans supervisors how much is being applied.

Ever wonder why salt winds up in the center of the road? That’s on purpose. “You want to open the road from the center,” he told the students.

Pierce also explained why it’s important to give plows plenty of room on the highway, and never try to pass them on the right.

To apply salt or brine properly, Pierce said, the ideal speed is between 18 and 22 miles per hour. Between 30 and 35 is as fast as it can go when clearing ice and snow off the highway.

Pierce said drivers should stay back about 500 feet so they can be seen in the side mirrors. And whatever you do, don’t pass it on the right, where it’s equipped with a wing, as well as the right-facing front plow blade. “All the snow is going to the right,” he said.

Church’s students, in addition to contributing the names Home Caverns and The Snow Cone to the ballot, learned a good deal about how Pierce uses the equipment to keep the roads clear and safe.

Quentin Phillips, for example, learned that the plow blade is curved to keep snow from flying into windshields behind it. And Trenton Hurley learned that when the salt comes out it spreads instead of pouring out in a line.

VTrans announced the “Name a Plow” contest earlier this month.

“Many of us saw the news coverage that went viral last year about the tradition in Scotland of naming their snowplows. While keeping Vermont’s roads safe for winter travel is serious business, naming the plows sounded like fun,” Transportation Secretary Joe Flynn said in a statement. “We hope that Vermonters will support this opportunity for children throughout our state to see the name they created on a snowplow that is maintaining Vermont’s highways.”

The following names are up for consideration when Monument Elementary School students go to the polls to chose a name for a Vermont Agency of Transportation snowplow: