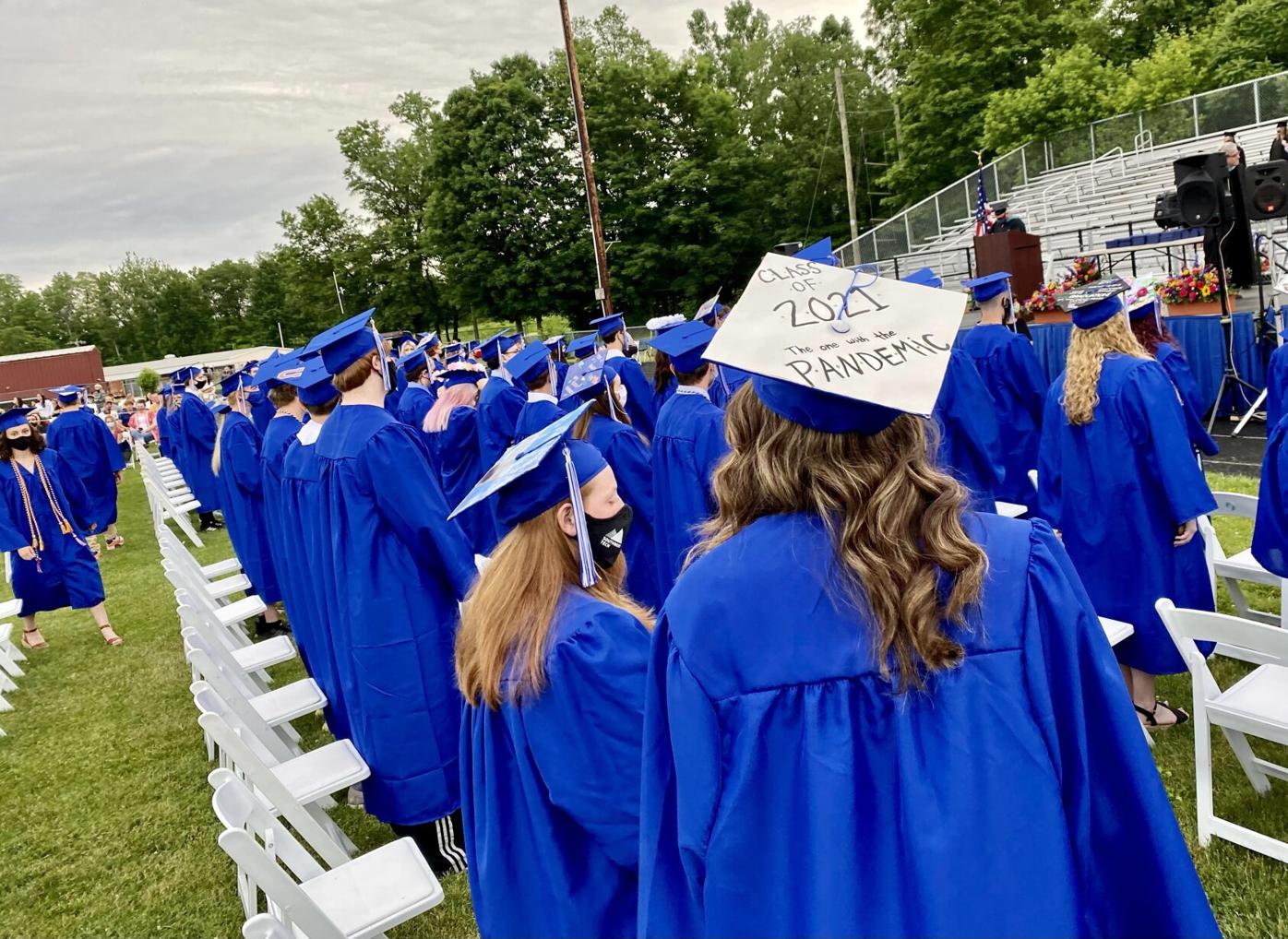 “Class of 2021 — the one with the pandemic,” reads Danielle Moscarello’s mortarboard Friday. 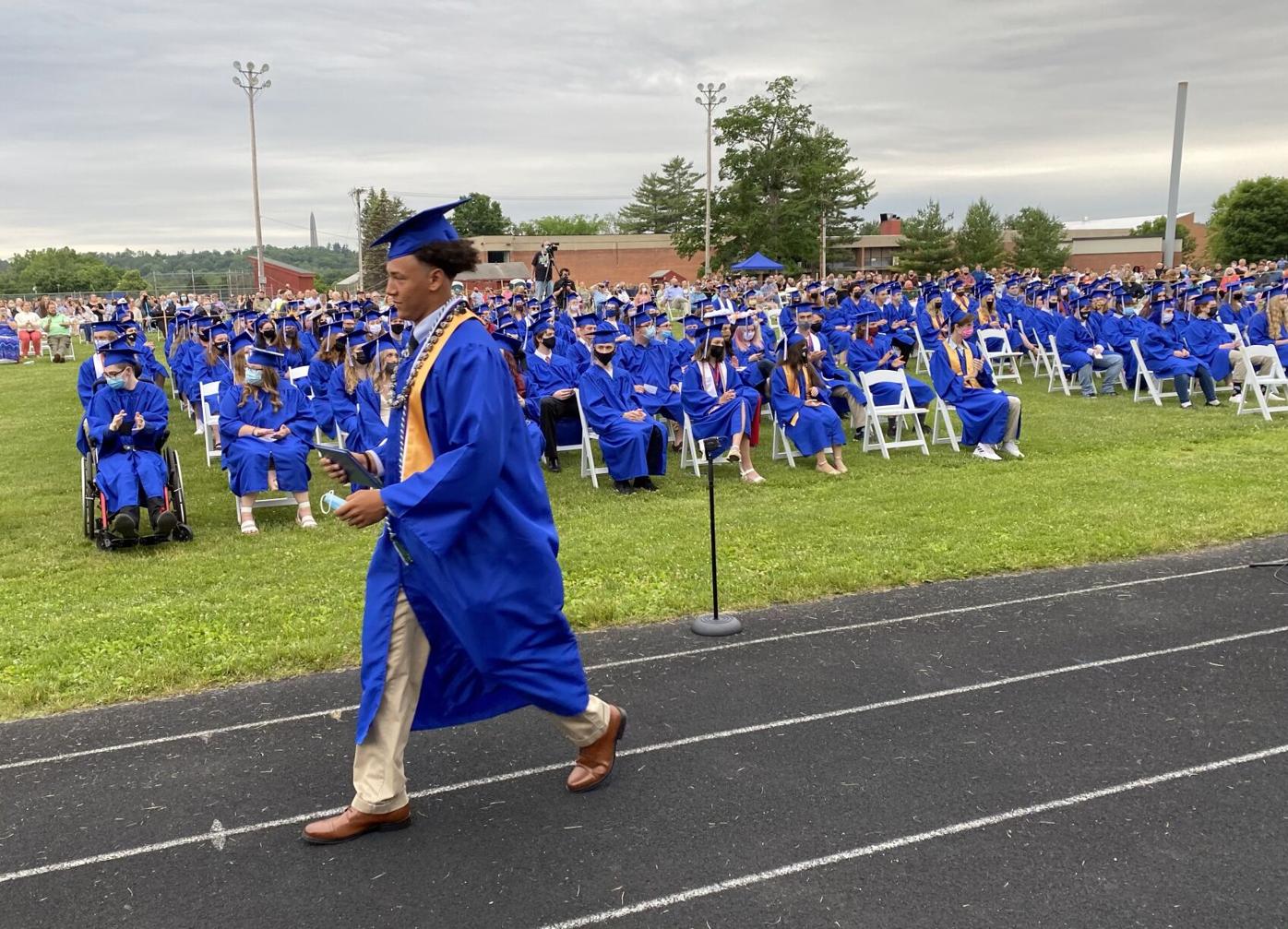 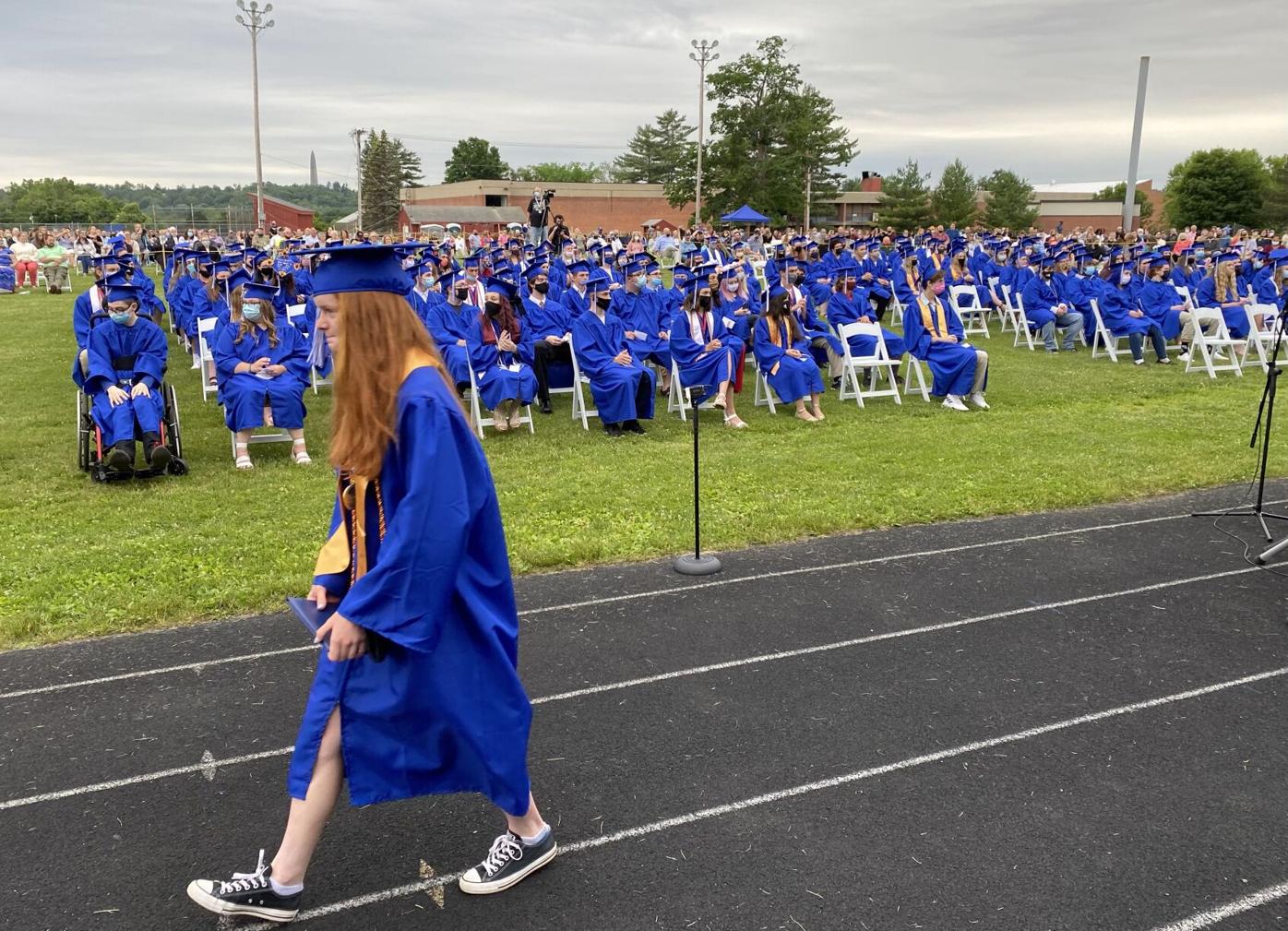 Margaret Payne, salutatorian of the class of 2021, returns to her seat. 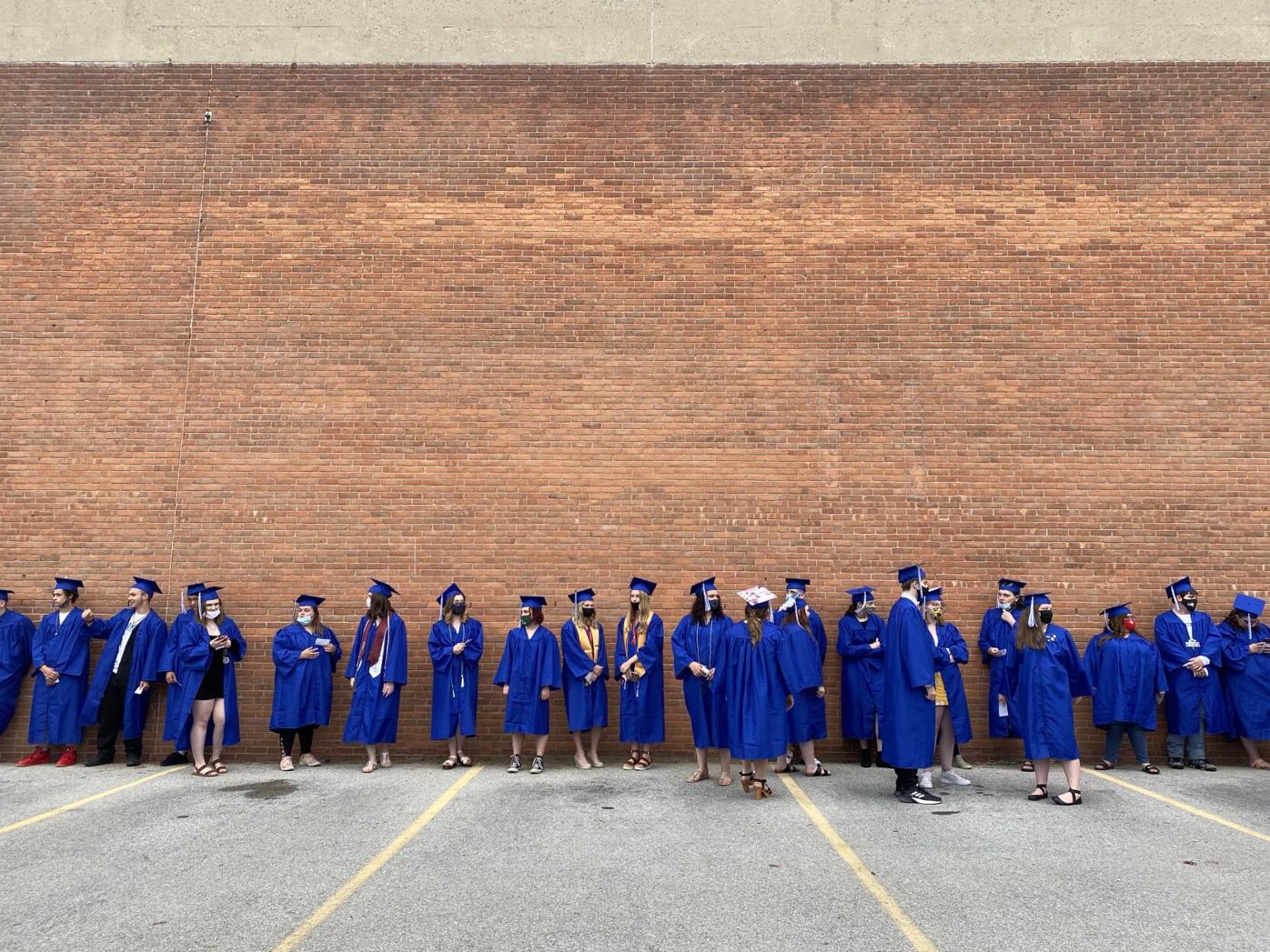 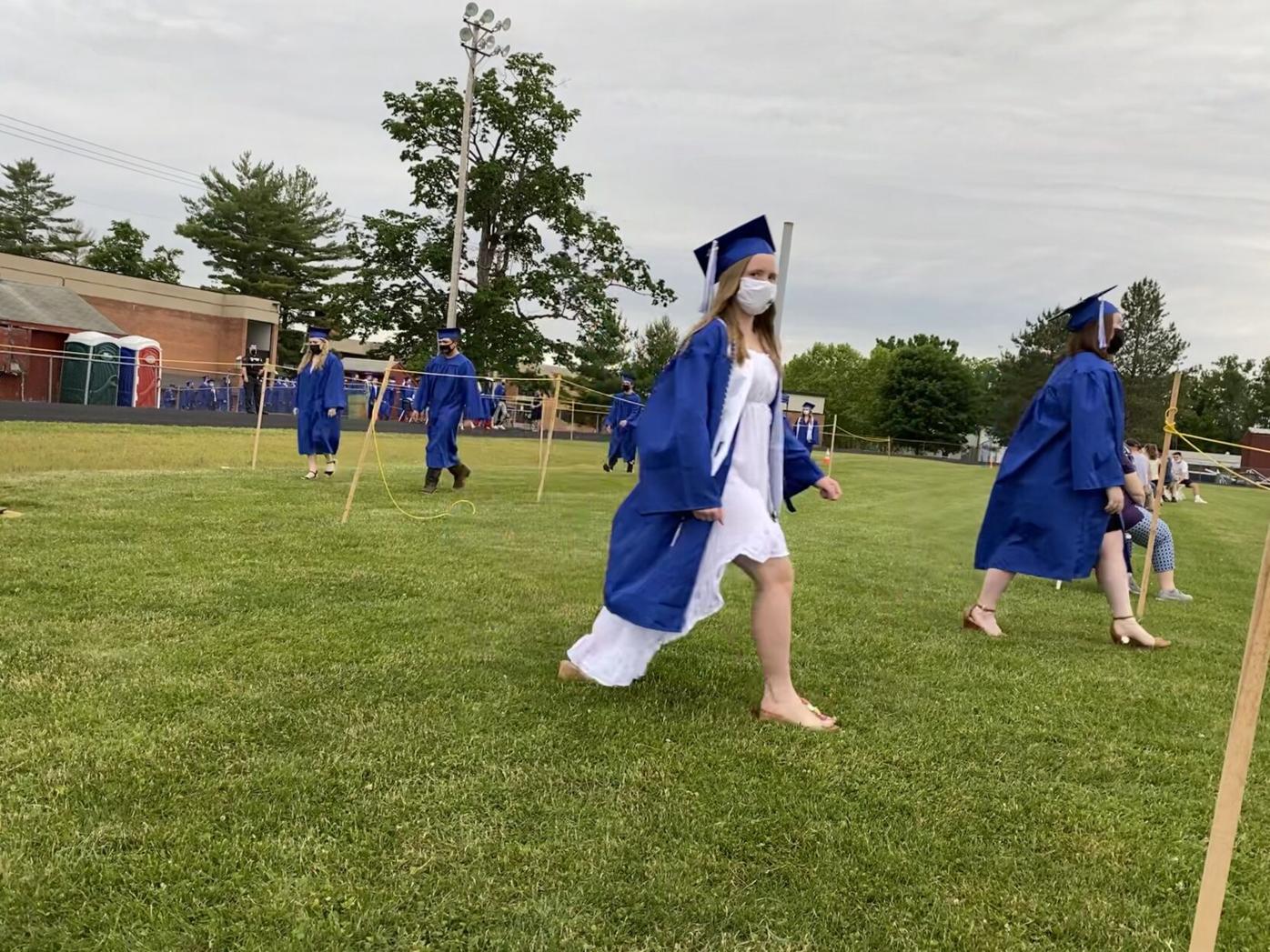 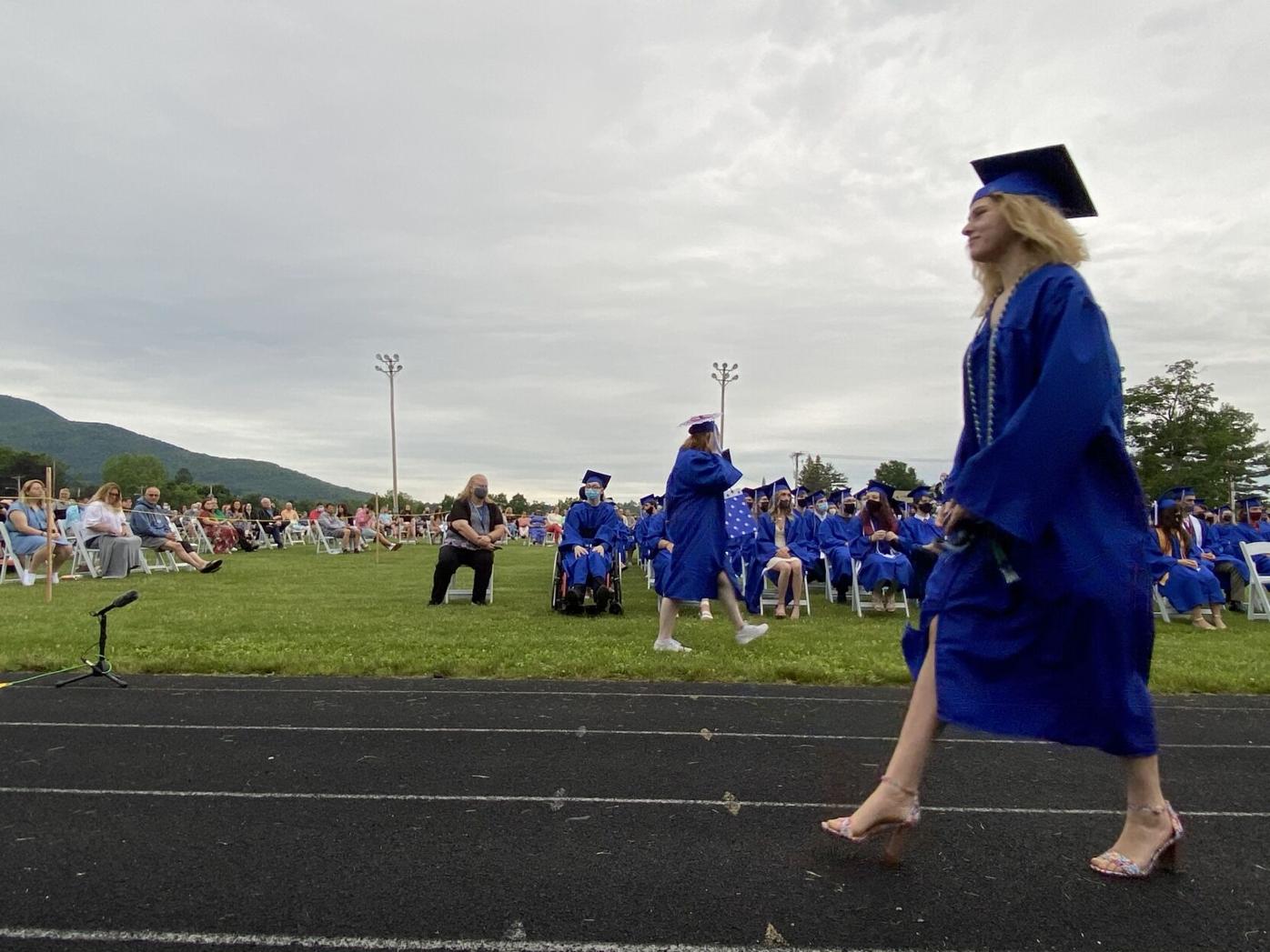 A student returns to her seat after receiving her diploma Friday evening at the Mount Anthony Union High School graduation. 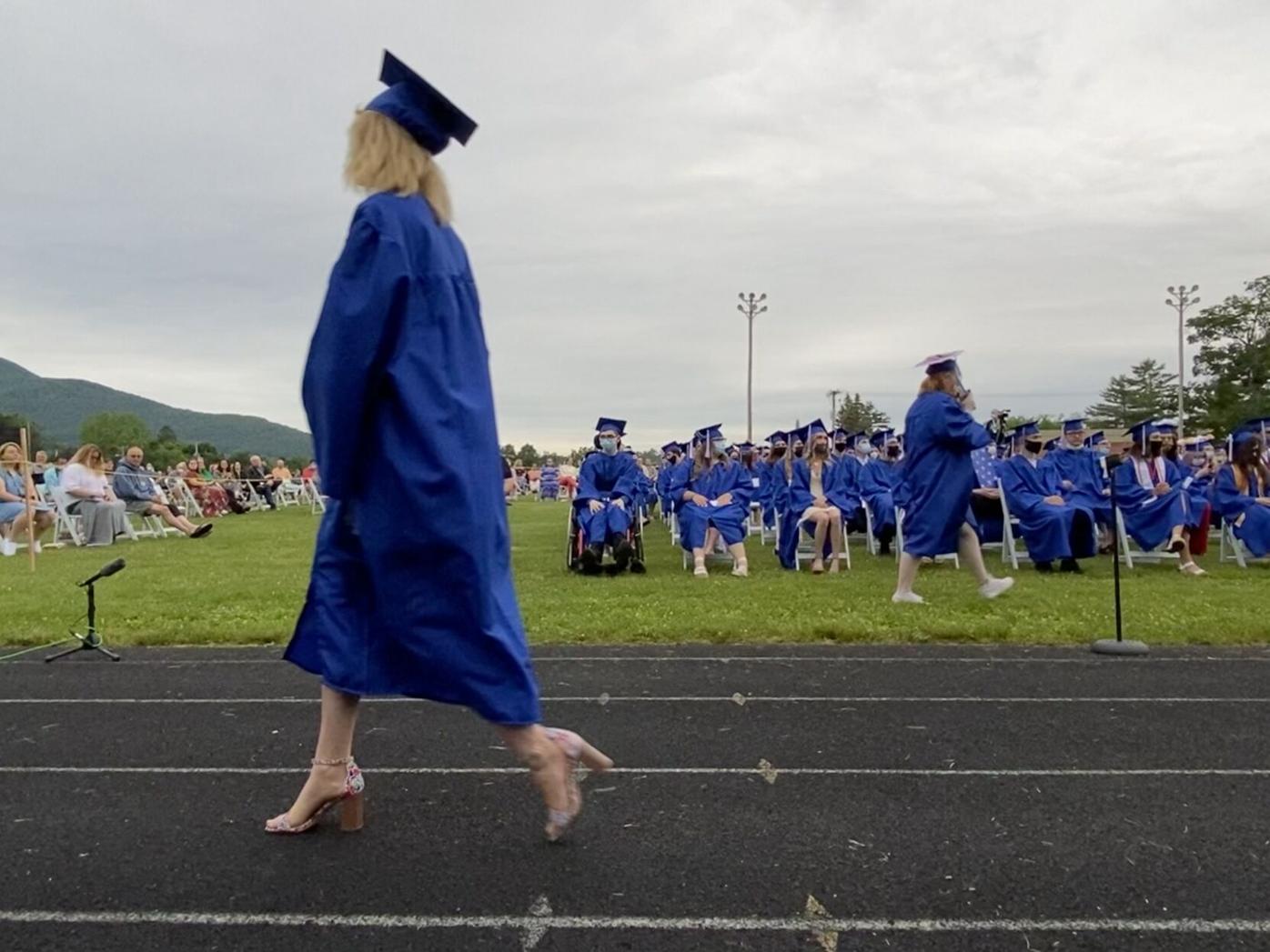 “Class of 2021 — the one with the pandemic,” reads Danielle Moscarello’s mortarboard Friday.

Margaret Payne, salutatorian of the class of 2021, returns to her seat.

A student returns to her seat after receiving her diploma Friday evening at the Mount Anthony Union High School graduation.

This story has been updated.

BENNINGTON — In a year filled with twists, turns, ups and downs, the Mount Anthony Union High School Class of 2021 was feted on Friday night during the 55th commencement exercises at Spinelli Field.

After a rousing rendition of the National Anthem by Carson Gordon, MAUHS principal Stephen Nixon welcomed the 2021 class, families and friends.

He said that in the four years of high school, students’ vocabulary changed to include words like quarantine, social distancing and pandemic.

“You didn’t have to learn history, because you were making it,” Nixon said.

He gave the students a list of things they might have missed in the last 15 months of the pandemic, including showing kindness, respecting others and being tolerant.

He also talked about giving back to the Bennington community, no matter where they go from here.

Class president Gavin Johnson was next, and told his classmates not to remember only the missed opportunities of the pandemic.

“Who knew Zoom even existed before March 16, 2020?” Johnson asked to a laugh from the crowd. “We persevered, worked through difficult times and never gave up.”

Johnson said that his wish for the class of 2021 was that they be happy about how their next chapter is written.

“In that next chapter, enjoy the small things and never forget to have fun.”

Salutatorian Maggie Payne said her favorite part of high school was her time on the Nordic Ski team and compared it to life.

“I always appreciated the support of my team and coaches,” Payne said. “Sometimes you have setbacks in skiing, equipment can break or the weather can change. But you have to keep moving on. Things may not always come out the way you want.”

Valedictorian Madison Hopkins’ speech was about hard work and how it’s defined differently for everyone.

“Change can be bad or good, and it takes strength to stay true to ourselves,” Hopkins said. “Personal growth is the hardest work of all, know your limits, ask for help and find out what works best for you.”

As all 180 graduates went across the stage to receive their diplomas, the audience applauded and cheered as the MAUHS Class of 2021 moved on to their next phase.

"I was excited because I was worried there wouldn't be a graduation [ceremony] at all," said Jocelyn Hay, the mother of Caleb Hay. "It was perfect timing for this class. I was really happy with the decision. It was perfect and what we needed [as parents]."

The graduation was quick and for Adrian Gruber, graduate Ashley Gruber's father, it seemed a little more subdued then usual.

"Opposed to a couple years ago, when there was beach balls floating around and squirt guns during [graduation]," Gruber said. "We're excited that they were able to get it done, right up to a month ago, we didn't think they would do it. It was great the kids got to be a part of it."

At the end of the ceremony, some parents were upset because they were unable to meet up with their children after the graduates exited Spinelli Field.

Several parents voiced their displeasure over being separated from the graduates in a roped-off area near the entrance to the field. At one point, a Bennington police officer handed a bouquet of flowers from a parent behind the rope to a graduate on the other side only a few feet apart.

Bennington police were heard telling families that they had to go directly to their cars after the ceremony.

On the MAUHS website, in an article titled "Graduation Information," one of the FAQs explains that families would not be allowed to get photos at the school after the ceremony, and that people "must leave the premises immediately following the ceremony."

Adam Samrov can be reached at