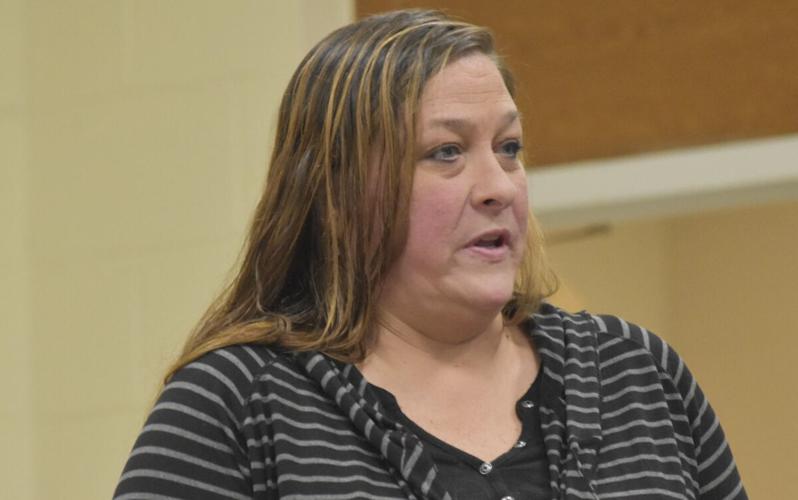 Vanessa Roberts of Manchester testifies during a hearing on her dog Timber on Wednesday, April 20, 2022. 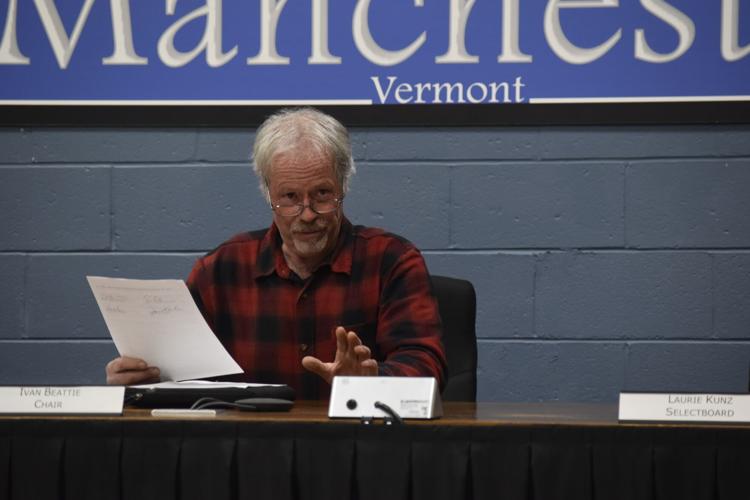 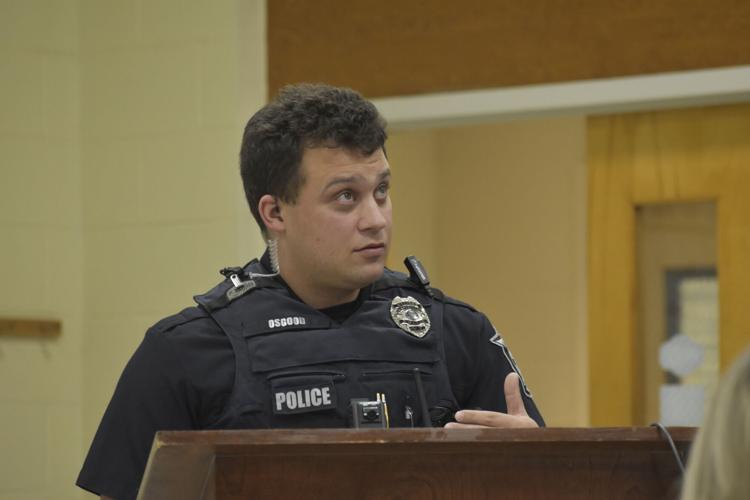 Manchester Police Officer Derek Osgood testifies during a hearing on a dog on Wednesday, April 20, 2022 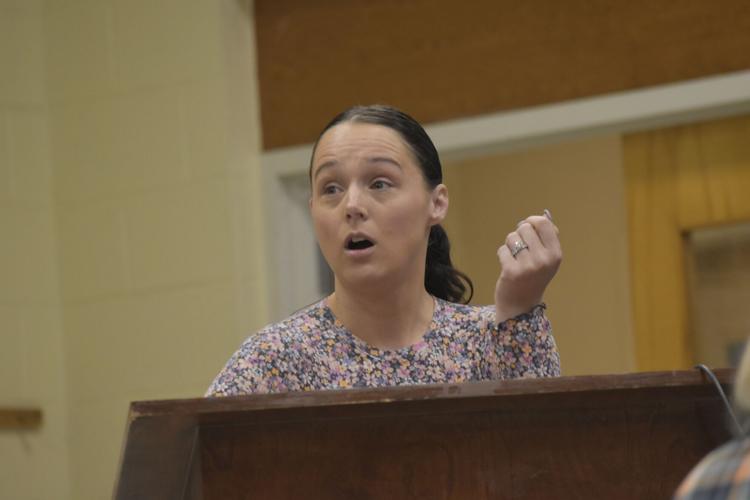 Clarissa Blaisdell of Londonderry testifies during a hearing on a dog that bit her in March on Wednesday, April 20, 2022

Vanessa Roberts of Manchester testifies during a hearing on her dog Timber on Wednesday, April 20, 2022.

Manchester Police Officer Derek Osgood testifies during a hearing on a dog on Wednesday, April 20, 2022

Clarissa Blaisdell of Londonderry testifies during a hearing on a dog that bit her in March on Wednesday, April 20, 2022

MANCHESTER — A dog that attacked a woman in March will not be put to death, but the town has set strict and potentially expensive conditions on the animal’s whereabouts for the rest of its days.

After an emotional public hearing and about 40 minutes of deliberation, the Selectboard returned findings of fact and an order requiring that Timber, a 9-year-old pit bull with no previous record with the town, must remain in a fenced-in, secure run behind his owner’s house on Roberts Road when not inside, must remain leashed and muzzled in public, and may not ever enter a town park, area school or “any other place where children gather.” The dog is to not have access to children under 18 unless they live at the residence.

The board found that Vanessa Roberts, the owner of Timber, had violated the town dog ordinance by failing to have Timber’s license and shots up to date. It also found that Timber, who bit Clarissa Blaisdell in the driveway of the family’s home on March 29, poses a “significant public safety and public health risk.”

The board also cited as a factor that one of Roberts’ previous pets, a pit bull named Dozer, was confiscated by the town for non-payment of fines in 2019 after he had run off his leash numerous times.

The decision followed emotional testimony describing how the incident had shaken Blaisdell and damaged her friendship with Roberts and with Robbie Bessette, Roberts’ nephew.

Roberts was ordered to comply with the order by May 6, or forfeit ownership of the dog, who is presently being boarded. She also has the right to appeal the order in Bennington Superior Court’s Civil Division.

Roberts, reached Thursday, said she would abide by the order and build the enclosure in the backyard of her house as requested. She said she was satisfied with the order and happy that she is getting her dog back.

Roberts also said that the incident happened near the house, near where the dog’s regular run is — not in the driveway, as Blaisdell testified.

Selectboard Chairman Ivan C. Beattie, who knows the family and employs one of Roberts’ sons, emphasized how seriously he took the proceedings, and the events that led to the hearing.

“I know that you had already spoken about possibly putting a run behind the house — we were trying to consider some of the offers that you made,” Beattie said. “But at the same time, this is really serious. It’s not something that we enjoy at all. With dog ownership comes responsibility. And with dog registration there comes the responsibility of the town.”

The conditions, he said, needed to accomplish two things: “It has to provide some kind of containment for Timber but also, God forbid some kid wanders into your backyard, it will stop them from trying to pet him.”

Blaisdell testified — at times in tears — that on March 29, she had stopped by the Roberts’ house to hang out with Vanessa Roberts’ nephew, Robbie Bessette, while her child was at lacrosse practice. She said she had texted Bessette to let him know she was coming over.

When she got out of the car, Blaisdell said, Timber ran up to her out of nowhere near the foot of the driveway and bit her on the flank.

“The next thing, I see Timber running. He was on a lead, he was running very, like, aggressive and I said, ‘No, no, no, no, no.’ And by that time he attacked my side. I tried to push him off me. He unlatched and then I got knocked down to the ground and that’s when I just kind of went in like a fetal position and covered my face and neck and I was screaming for Rob, help.

That’s when Timber got my wrist.”

Bessette and one of Roberts’ children ran out of the house to help, got Timber into the house and cared for Blaisdell, who said she was “bleeding pretty bad” and realized she needed medical care. Besette drove Blaisdell to Manchester Medical Center for treatment.

“I was very shook up. That’s why I didn’t give much detail. I just wanted to get fixed up and know my health was OK,” she said. “When we got there I said the dog was a stray at first because I was trying to protect them.”

Roberts, in an opening statement, said that Timber survived an attack by another dog when he was 2 years old, an event that had a significant effect on him. She said the dog had been scheduled to get his rabies shot in April, but had never had an incident like this before.

“It takes a while for him to warm up to people. He’s very protective,” Roberts said. She said when Blaisdell had visited the house the week before, they moved the dog away from her, as they do whenever someone the dog doesn’t know visits.

At first, in the immediate aftermath of the incident, Blaisdell said Roberts and Bessette were checking up on her and apologizing for the incident. But the relationship with both frayed, she said, when she relayed to Roberts that she’d heard Timber had nipped at others before, and when she asked Bessette if Timber’s vaccinations were up to date.

“It’s a tough situation all around,” she said.

After the hearing, which also included testimony by Manchester Police Officer Derek Osgood and town health officer Peter Brabazon, the four members of the board met in deliberative session for about 40 minutes to reach a consensus. (Board member Heidi Chamberlain recused herself from the case and was not present.)

The board also ordered that police impose the maximum financial penalties as provided by the town ordinance, and that it not return Timber to the family until all fines and fees are paid. The meter is running; Roberts will have to pay for Timber’s daily boarding fees, as well as fines for violations.

Beattie noted that Roberts had previously been cited by the town for failing to curb Dozer. He said it was incumbent upon the board to reach a decision that would assure public safety, in light of the injuries Blaisdell suffered and the rabies treatments she received because Timber’s rabies shots were not up to date.

“There are some elements of this that require some investment on your part,” Beattie said. “I know you’re going to try to do the right thing. But we’ve got a history here.”