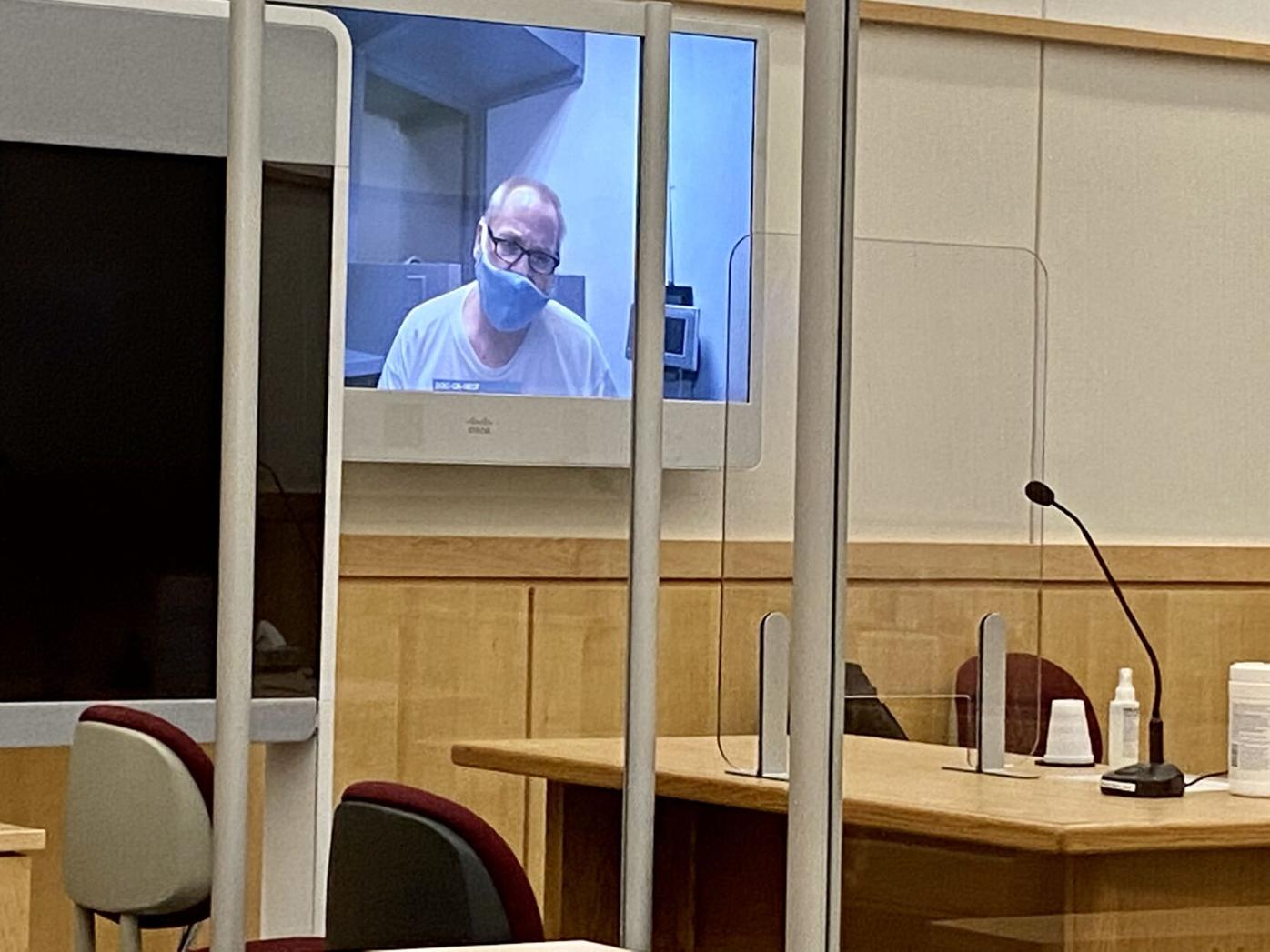 George Guile, 53, who pleaded guilty for the drug overdose death of Amie Pero in March 2019, appears via video link from jail at his sentencing in Bennington Superior criminal court on Thursday. 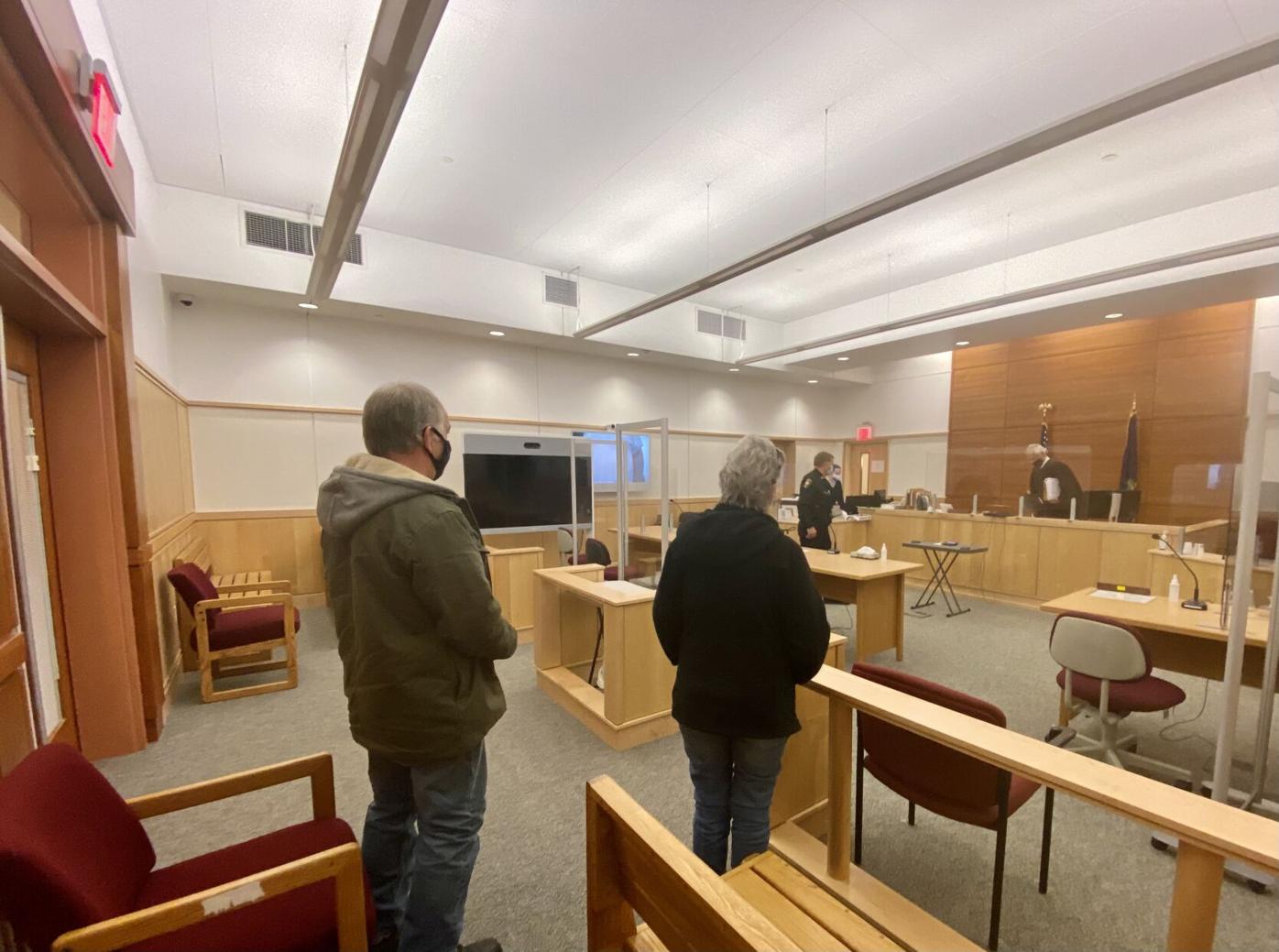 Members of Amie Pero’s family appear in Bennington Superior criminal court on Thursday for the sentencing of George Guile, who admitted to selling her the drugs that led to her death in March 2019.

George Guile, 53, who pleaded guilty for the drug overdose death of Amie Pero in March 2019, appears via video link from jail at his sentencing in Bennington Superior criminal court on Thursday.

Members of Amie Pero’s family appear in Bennington Superior criminal court on Thursday for the sentencing of George Guile, who admitted to selling her the drugs that led to her death in March 2019.

BENNINGTON — A Bennington man has been sentenced to 18 months to eight years in prison for the heroin overdose death of a local woman last year.

George Guile, 53, was sentenced Thursday after pleading guilty to manslaughter. He admitted he and his wife sold the drugs that killed 33-year-old Amie Pero of Bennington.

Superior Judge Cortland Corsones imposed the sentence over the objections of Pero’s family, who argued that Guile’s plea agreement with the prosecution was too lenient on him.

“I beg for your forgiveness,” Guile had told Pero’s family in between sobs, saying being “an addict” led him to make bad choices.

Authorities have said Pero passed out while riding a cab in the morning of March 1, 2019 — after buying and snorting heroin at the Bennington motel room where Guile and his wife lived.

Guile knew when he sold Pero the drugs that she’d just left the hospital, having been treated for pancreatic and liver problems, said Deputy State’s Attorney Robert Plunkett. Guile even had to help Pero down the motel steps as she was leaving, the prosecutor told Corsones.

She died three days later at Albany Medical Center. Pero’s mother apparently decided to take her off life support when she showed limited brain activity. She left behind a 3-year-old daughter.

Her cause of death was found to be intoxication to the drugs that Guile had sold her, including fentanyl and heroin, Plunkett said via video conference.

Guile also pleaded guilty Thursday to possessing 1 gram or more of heroin. The drug was packed in 140 bags, which were found on him during a police search.

His other felony charge of dispensing heroin, with death resulting, was dismissed under the plea agreement.

The agreement, which Plunkett said was worked out by Bennington County State’s Attorney Erica Marthage, prescribed a sentence of 18 months to 8 years in exchange for three guilty pleas from Guile. They included a charge of driving under the influence in a separate, 2018 incident.

REQUEST FOR TRIALBecause the plea agreement wasn’t binding on the court, members of Pero’s family repeatedly asked Corsones to throw it out and schedule Guile for trial.

Her mother, father and aunt said they didn’t agree with the plea deal and didn’t know about its existence until a week earlier. They argued that long prison sentences would help solve the local and state problem with drug addiction.

Guile’s charge of dispensing heroin, with death resulting, carried a potential maximum penalty of 20 years in prison; the one for manslaughter, up to 15 years.

Pero’s mother, Linda Pero, said she was “heartbroken and completely shocked” that a plea agreement was being considered. In a letter that was read aloud in court, she asked if her daughter’s life meant so little that Guile was offered such a deal.

She said the family earlier assented to a plea deal for Guile’s wife, Jennifer, because it involved her agreeing to testify against her husband at trial.

Pero’s father, Brad Pero, described his only daughter’s death as “the nightmare of my life.” He described her as smart, funny, loving and a good soul.

He told the Banner his daughter started using heroin at around 28 years old. Her pancreatic and liver problems, he said, stemmed from her substance abuse.

The year before she died, Pero apparently had overdosed at least seven times and had been saved by an anti-opioid antidote.

The prosecutor said that if the case had gone to trial, the primary evidence against Guile would’ve been the testimony of his wife. (She was sentenced in October 2019 to one to eight years in prison for manslaughter.)

Plunkett said Guile had two other heroin-related cases, which were recently dismissed because the state’s confidential informant died from a drug overdose. These cases, he said, could have led to a lengthier sentence than the one in Guile’s plea agreement.

“Perhaps the procedure, approach we got to it was not the best, and will be remedied later,” Plunkett said before asking the judge to accept the plea agreement. “This is an appropriate sentence.”

SUCCUMBING TO ‘OWN ADDICTION’Defense attorney Susan McManus said she didn’t think Guile and his wife were “big-time drug suppliers,” saying the couple had “succumbed to their own addiction.”

McManus said she believes her client is very remorseful, and his being under the corrections department’s supervision for the next several years will provide his life with needed structure.

Guile attempted to get in-patient treatment while waiting for his case to be resolved, his attorney said via video conference, but the court denied his requests. He apparently couldn’t get out of jail because he couldn’t pay bail.

“I’m a parent too. I would feel the same way about me if it were the other way around,” Guile said from a video link in jail. “I don’t go a day without thinking of her.”

It was the second time he made a statement addressed to Pero’s family. Her father and aunt initially participated in the hearing by phone but were asked to come to the criminal division courthouse when they complained that the technological setup didn’t allow them to clearly hear Guile’s statement.

After taking about half an hour’s break to consider Guile’s sentence, Corsones said he “struggled significantly” with whether the punishment laid down in the plea agreement was enough.

Though Guile didn’t intend to kill Pero, the judge said his actions ended the life of a beloved daughter and mother. He said Pero sought out the drugs, but she could have still turned her life around had she lived.

The judge said he understood the Pero family’s position for a longer prison sentence, but that Guile needed not just punishment but rehabilitation.

“If locking up drug dealers and throwing away the key worked, I would certainly do it,” Corsones said. “But time and again, it has been shown that it doesn’t work, because despite the risks, another person always moves in to sell more drugs.”

After Guile’s sentenced was pronounced, Pero’s father told the Banner he wasn’t pleased with the outcome but there wasn’t anything he could do.

Plunkett, the prosecutor, didn’t respond to Banner messages asking for a response to the statements made by Pero’s family.

It’s unclear whether Guile — who was arrested in March 2019 — is currently eligible to apply for parole. The state Department of Corrections told the Banner on Monday that the agency was still figuring it out.

“If locking up drug dealers and throwing away the key worked, I would certainly do it. But time and again, it has been shown that it doesn’t work, because despite the risks, another person always moves in to sell more drugs.”