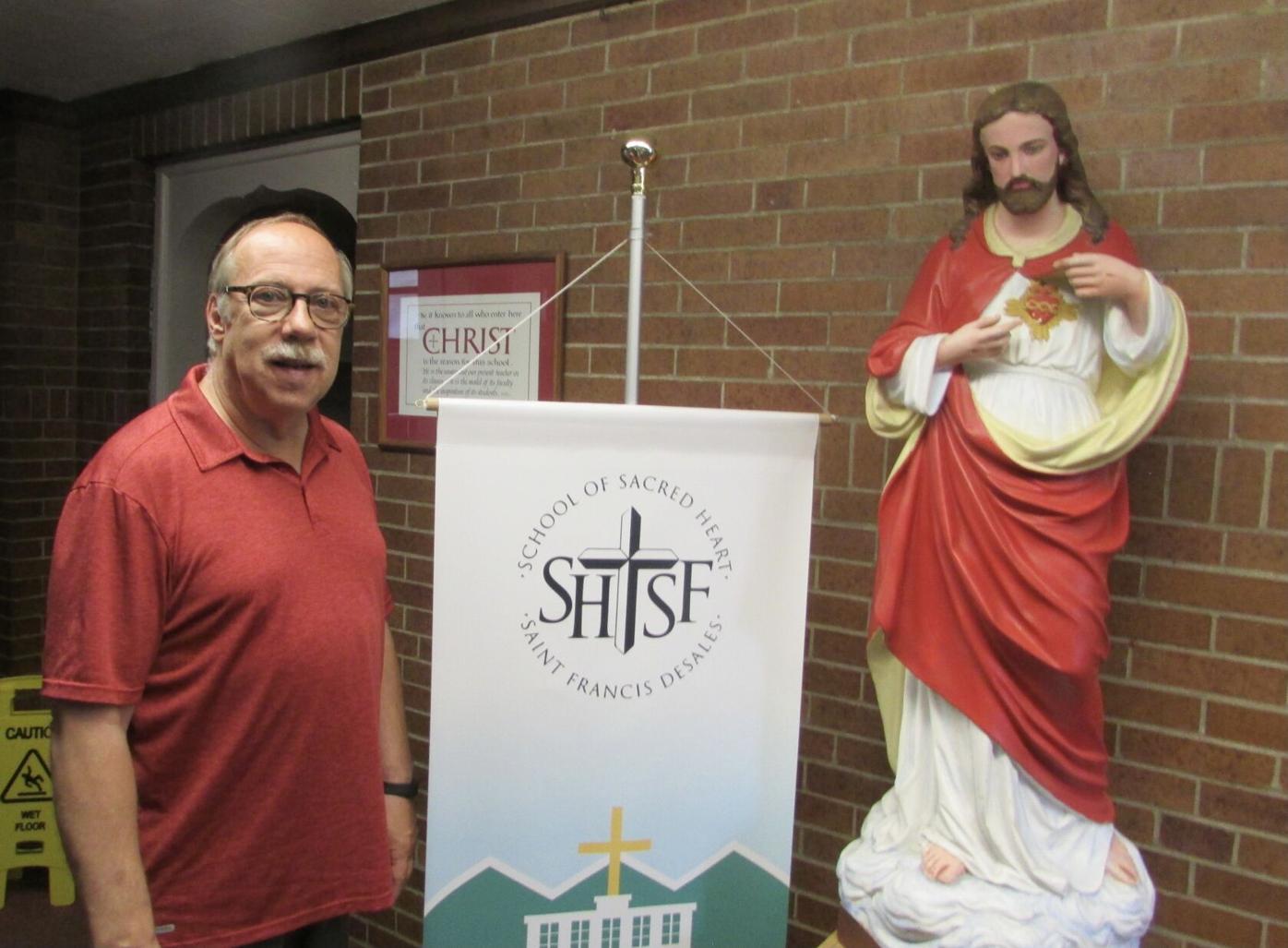 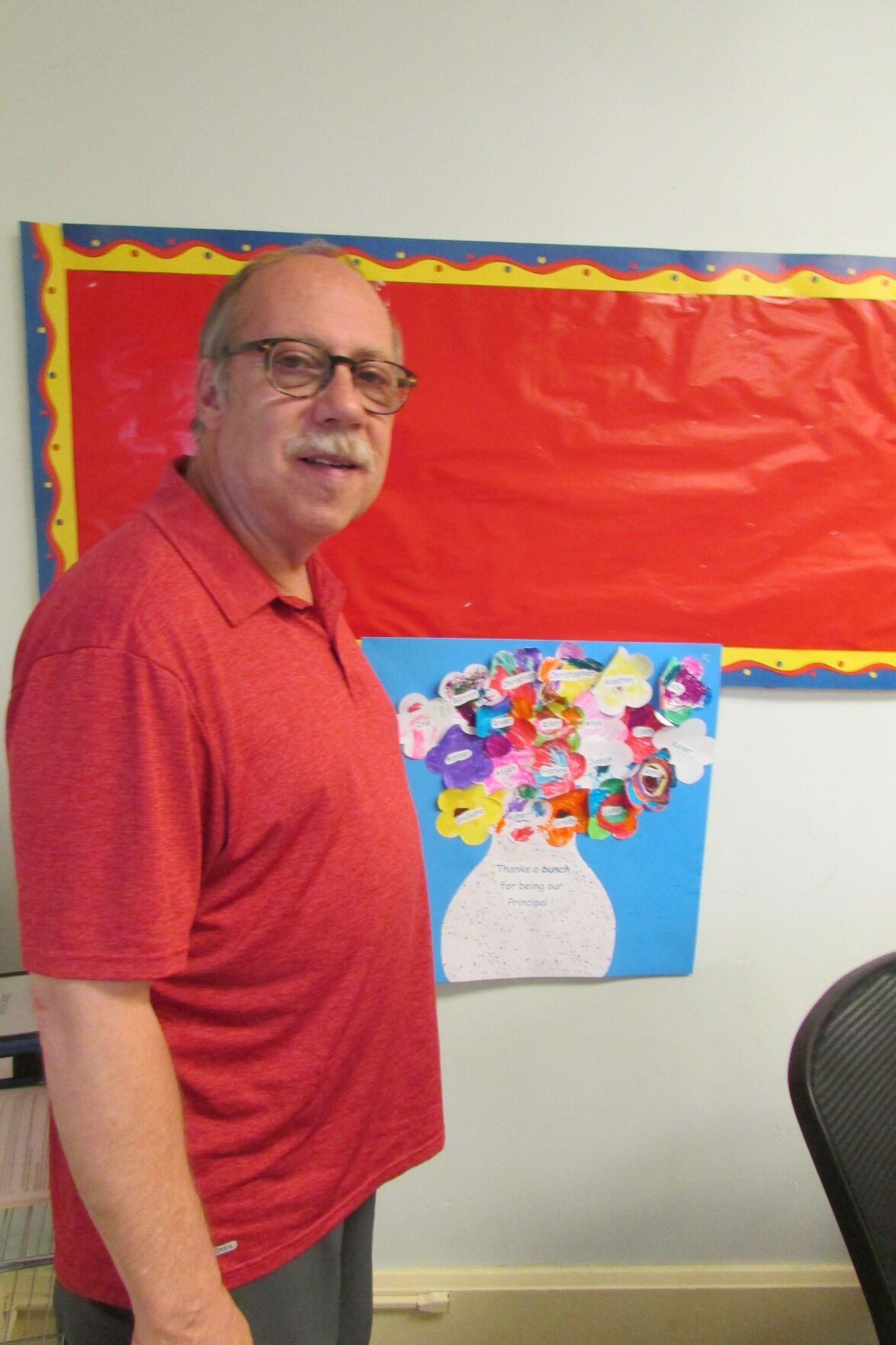 Retiring Principal David Estes with a poster made for him by the preschool. It says: “Thanks a bunch for being our principal.” 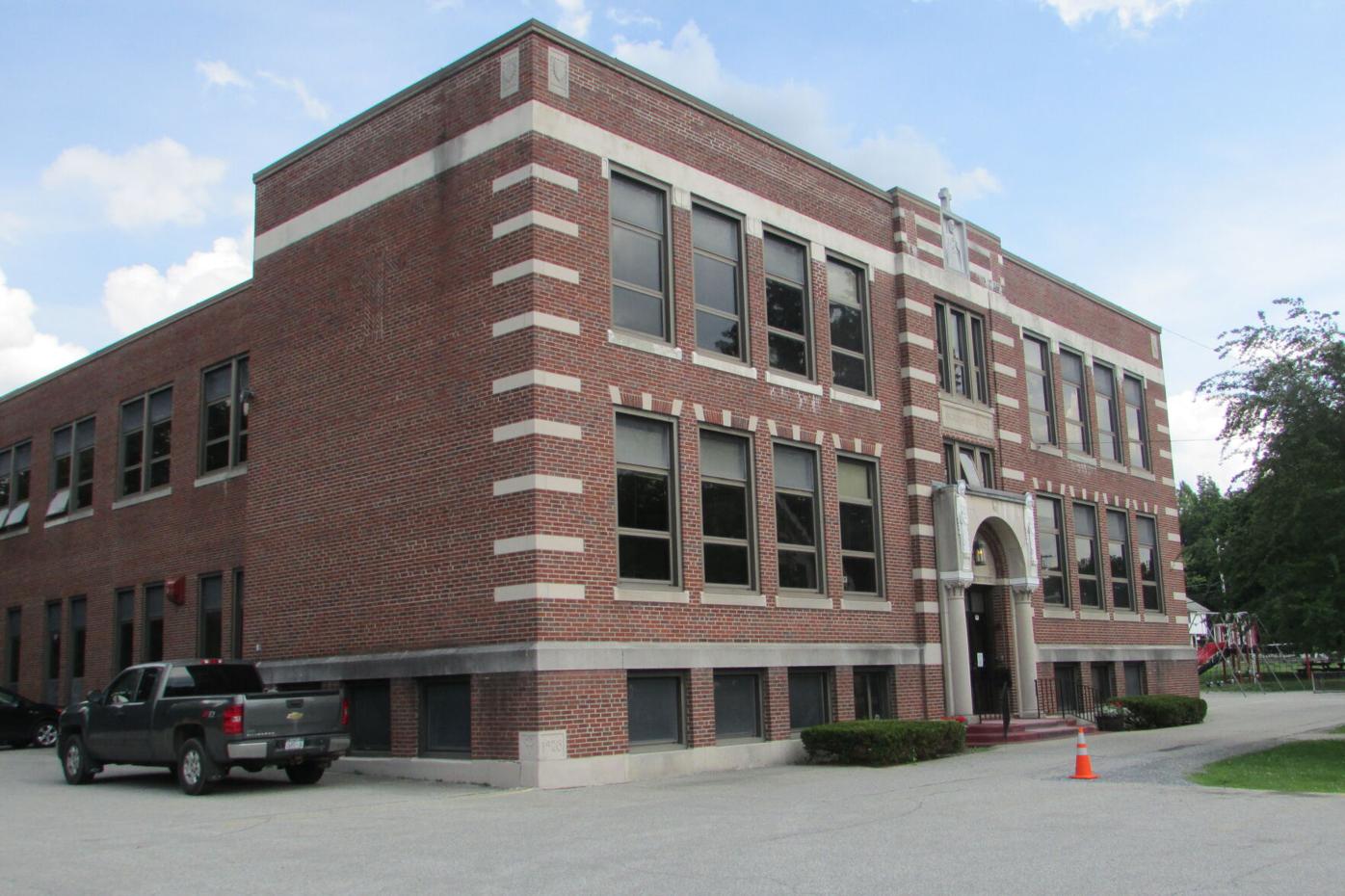 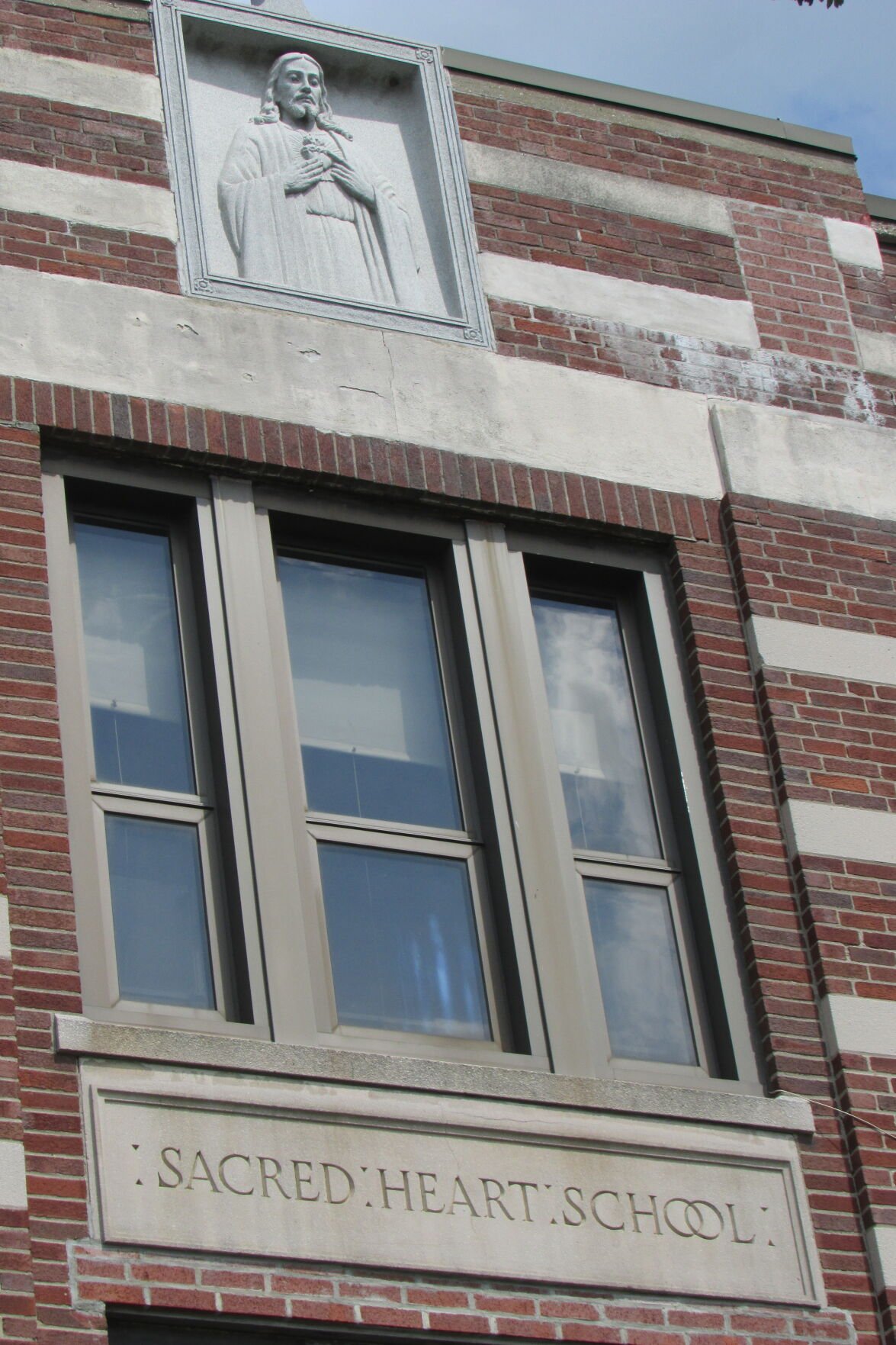 Retiring Principal David Estes with a poster made for him by the preschool. It says: “Thanks a bunch for being our principal.”

BENNINGTON — Few people have worked at the same place their entire career. David Estes, who has just retired as principal of The School of Sacred Heart St. Francis de Sales, is one of them.

His 42-year career at the school began right after graduating from North Adams State College in 1979. He taught for several years and then was appointed principal in 1987, succeeding Sister Ellen Therese Barry. Estes was the longest-serving Catholic School principal in the Diocese of Burlington, which consists of the whole state of Vermont.

“It’s been an enjoyable experience. I love the school. The school has been a part of my life for most of my life. And we’ve grown. When I started here there were 91 students, now we’re at 198 students,” he said. “We’ve added classes throughout my tenure. We added preschool. We brought back seventh and eighth grade.”

When he started, the school went only up to sixth grade. “I brought back the seventh and eighth grade, so we have a pretty strong middle school program now, which is kind of neat.”

Estes had been planning to retire last year, but then COVID-19 hit. He was persuaded to stay another year.

“We couldn’t express ourselves the way we wanted to,” he added. “It would be hard for a new principal to come into a situation and deal with all of the issues.”

However, “kids are resilient. That’s one thing that amazed me about this year is that they were so ‘OK, we’ll do it.’ And they did. And they were here learning, which is so important.”

Tiffany McKenna, most recently a teacher at Shaftsbury Elementary School, will replace Estes as principal. She has children in the School of Sacred Heart St. Francis de Sales and taught there for one year in the past.

“She’s ready to take over. I’m always worried I’m going to forget to tell her something,” Estes said. “We’ve been working on the transition since she’s been named principal, but there’s so many details. Little things that you just do automatically. To try to remember all of those. But she’ll do a good job. I feel confident in leaving the school in her hands.”

Estes grew up in North Adams, Mass., where he received a Catholic education and was active in church life. He sang in the local Christian Minstrels group in high school and college. While in college he taught in the religious education program at St. Francis of Assisi Church in North Adams. “So, I always wanted to be in a Catholic school,” he said.

At the time, he thought he would end up teaching at a Catholic school in the western Massachusetts Diocese of Springfield. However, Dr. Richard Sleeman, of Bennington, who was teaching at North Adams State, passed along to Estes’ student teaching supervisor a tip about a job opening in Bennington.

“He said there’s a position at the Catholic School in Bennington,” Estes said. “So, I applied for it and here I am.”

As if finding his life’s work was not enough, Estes also met his future wife, Judi, after attending Mass at Sacred Heart Church which, until the Bennington Catholic parishes eventually merged, was located on the first floor of the school. A mutual friend introduced them. Judi Estes taught at Mount Anthony Union High School for 36 years and is also retired. They live in Bennington.

After becoming principal, Estes continued teaching. He taught math and music. In fact, he just finished teaching algebra to eighth graders. “I love teaching math,” he said. “That’s why I went to school for to be a math teacher.”

He has also taught social studies and technology, coached basketball and soccer teams, directed all the school Christmas programs and produced a middle school musical every spring.

Music plays an important role in education and gives children a different way of expressing themselves, he said. “And there’s so much beautiful music in our world, in our Catholic world and so it’s good for the kids to be a part of that.”

Estes never thought he would become principal and didn’t have any aspirations to be one. “I was always a teacher, being with the kids is what’s important,” he said. “And I think that’s how you get to really feel the pulse of the students is by being with them every day.”

Any retirement plans? “Not yet. I think that will come. I just want to enjoy not having to be responsible for a while and then I’ll decide what it is I want to do,” he said. “As I said, my wife is also a retired teacher, so we have a few trips planned.”

The Estes’ two children attended The School of Sacred Heart St. Francis de Sales, and the family paid full tuition: “It was worth every penny that we paid,” he said.

The school works hard to build community. Except during the pandemic, the whole school joins together in the morning for prayer, he said.

“We pray together, we do the reading of the day. If there’s something important that’s happening — if it’s somebody’s birthday, the whole school sings Happy Birthday to them,” Estes said. “It’s so important to the growth of and expansion of the Catholic school system … just knowing that you feel connected and belong.”

His son once told him, “‘When I felt most connected to God was when I was at school at Sacred Heart.”

Estes said it’s a challenging time to be in education. “The society, culture is very different, so we do our best to make sure our kids know what’s right and what’s wrong.”

His children who went from the school to Mount Anthony could see trouble at the public school and walk away from it. “I knew we did the right thing,” he said.

It can be difficult for the staff because sometimes they teach things that are very counter-cultural. “But I think that’s what’s missing and I think that’s what kids need,” he said. “They need to know that there is a moral compass.”

Connected to the parish

“We have no doubt that he is most deserving of this award. When Blessed Basil Moreau founded Holy Cross in 1837, he had a clear vision ‘to make God known, loved, and served.’ David does this on a daily basis,” the Congregation stated.

“He has given over 40 years of his life to Catholic education and to our school, He works with families and teachers extremely well,” Wiseman said. “He clearly is a role model as an educator in the faith, the motto of the Holy Cross order.”

“We wish him and wonderful wife, Judi, the best in their retirement,” he added.

Estes has served on the board of trustees of the Bennington County Choral Society and recently finished a six-year term on the Independent School Commission at the New England Association of Schools and Colleges.

Jeanne Gearon, superintendent of schools for the Diocese of Burlington, quoted in an article about his retirement in the diocesan magazine, said Estes epitomizes the definition of a “servant leader.”

“David’s ministry has been a blessing to the Catholic community in the Bennington area as well as to the area as a whole,” she said. “His leadership has inspired many to give their best in all they do. His educational vision has kept The School of Sacred Heart St. Francis de Sales wholeheartedly focused on ensuring every student’s God-given gifts and talents are nurtured and allowed to blossom.”

Mark Rondeau is the Banner’s Night Editor and Religion Editor. He can be reached at mrondeau@benningtonbanner.com.