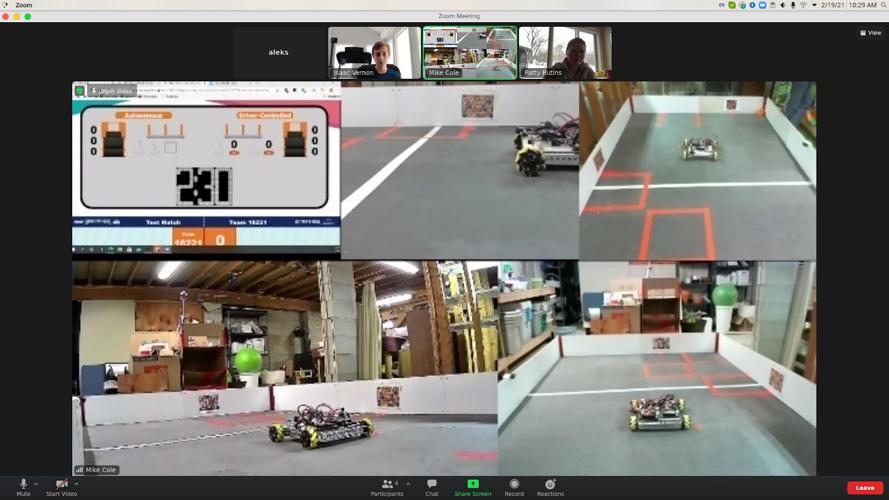 One student member of the Manchester Machine Makers robotics team controls the group’s robot remotely from home as other members watch from their respective homes. 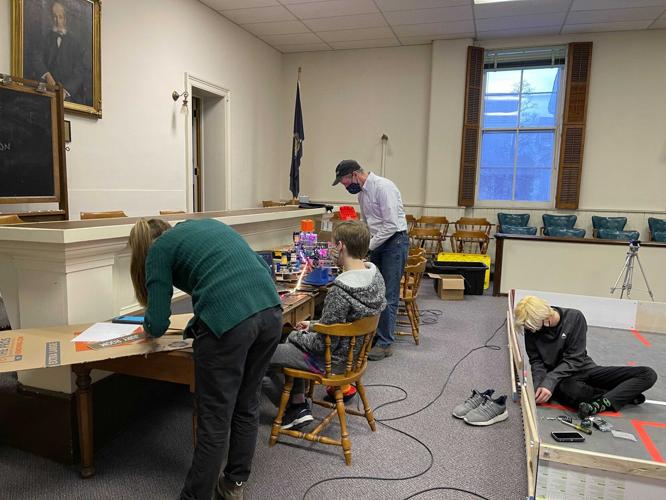 Members of the Manchester Machine Makers convened at the Manchester Village Courthouse for several days leading up to a state-level competition on March 13. 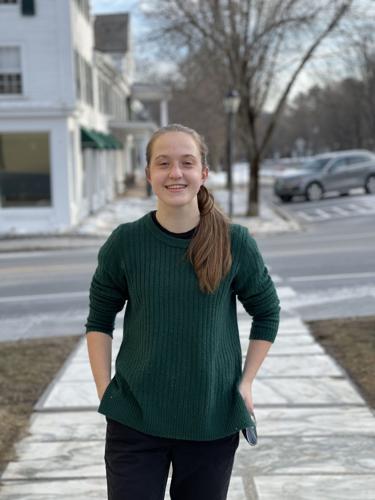 Charlotte Ruley, an 11th grader at Burr and Burton Academy, was selected by Vermont FIRST Tech Challenge officials as one of Vermont's two "Dean's List Finalists." 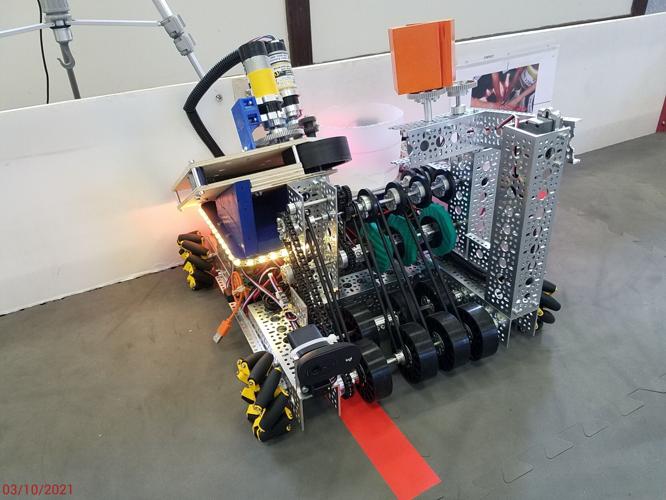 The robot designed, built and programmed by the Manchester Machine Makers student team for the 2020-2021 season.

One student member of the Manchester Machine Makers robotics team controls the group’s robot remotely from home as other members watch from their respective homes.

Members of the Manchester Machine Makers convened at the Manchester Village Courthouse for several days leading up to a state-level competition on March 13.

Charlotte Ruley, an 11th grader at Burr and Burton Academy, was selected by Vermont FIRST Tech Challenge officials as one of Vermont's two "Dean's List Finalists."

The robot designed, built and programmed by the Manchester Machine Makers student team for the 2020-2021 season.

Teams of students from the Bennington, Manchester and Hoosick, N.Y. areas recently competed with more than two dozen other teams in this year’s Vermont FIRST Tech Challenge Championship, a competition that involves designing, building and programming robots to tackle scorable objectives.

The state championship, held electronically on March 13, marked the culmination of a season that began last September, when the year’s design challenge was unveiled and teams began meeting to conceptualize their robots, which in competition are tasked with carrying out tasks both autonomously and with operator assistance. Teams consist of up to 10 students in 7th through 12th grade.

One of the three local teams, the Manchester Machine Makers, which formed in 2019, won one of the competition’s seven judged awards, the Think Award, which “primarily focuses on the team’s use of math and science to drive its engineering design process,” according to Mike Cole, one of the team’s coaches. The team took second place in the same award last year.

The Manchester team’s members for the just-concluded season were Charlotte Ruley and Taylor Jarvis, both 11th graders at Burr and Burton Academy; Isaac Vernon, a 9th grader at BBA; Aleks Rutins, an 8th grader at The Dorset School; and Jason Giedja, a 7th grader at Long Trail School. Meg Ruley was the team’s other coach, and its mentors were Bob Ruley and Patty Rutins.

The team, a chartered 4-H Club by UVM Extension, recruits students in the Manchester area and is open to new members. Its corporate sponsors are Engineered Printing Solutions of Vermont, the Vermont Academy of Science and Engineering, PTC, GoBilda, REV Robotics, and TPW Real Estate.

In addition to the team-level award, team member Charlotte Ruley was selected by competition officials to represent the state as one of two “Dean’s List Finalists” this season. The recognition means that Ruley is a candidate among other state and regional finalists for one of ten Dean’s List Award spots to be chosen by FIRST, the nonprofit that oversees the worldwide competition.

Cole said criteria for the individual award includes academic performance and evidence of personal commitment to science, technology, engineering, and mathematics as reflected by outreach to professionals in STEM-related fields, educators and other students.

Ruley, whose work this season for the Manchester team focused mainly on hardware design, said she and other team members met with other teams to seek and offer advice, and participated in an online show-and-tell event. Though participating in the competition is “the hardest thing I do,” she said, the “gracious professionalism” and cooperative nature of the event makes it fun.

The number of Vermont teams in the competition this season more than doubled over the previous season, which Cole said could be attributed largely to a $40,000 grant from FIRST to Generator Makerspace, of Burlington, in partnership with UVM.

The teams from Bennington and Hoosick, N.Y. were among this new crop; both started to form in November, according to Chris Callahan, a coach of both teams and UVM professor.

Because of the coronavirus, leading up to the championship, the teams convened regularly as a group and in one-on-one, coach-and-student meetings through Zoom, Callahan said. It wasn’t until February, weeks before the big event, that some team members met each other for the first time.

Callahan said that as an engineer he has been working on remote teams for more than two decades and that, in his view, the student teams being compelled to collaborate in a similar fashion served as a potentially useful lesson.

“This is what they will see in the workforce,” he said.

In a statement, a spokesman for Engineered Printing Solutions, one of the Makers’ sponsors, praised the team as “the manufacturers of tomorrow.”

“We see in our own business that automation and robotics will increasingly dominate the manufacturing environment of tomorrow and indeed are already making tremendous inroads today,” said marketing manager Peter Baldwin. “EPS remains committed to developing a 21st-century workforce right here in Vermont, as our growth as a company depends upon being able to draw from a qualified local labor pool.”

The Manchester team worked remotely from November to early March before convening in person for a few days at the Manchester Village Courthouse, a meeting space made available by the town of Manchester.

As the team’s prototype came together, the group found a way for team members to operate the robot from a remote location, said Cole, who added that, as far as he knew, the Makers were the only Vermont team to set up such a capability.

Both Callahan and Cole stressed that would-be participants don’t need to be STEM wunderkinds to join one of the robotics teams.

The need for teams to recruit talent, fundraise and manage progress could make it appealing to kids interested in start-ups and entrepreneurism, Cole suggested, and the sports-like nature of the competition might appeal to athletes.

“There is room for growth in so many ways,” said Callahan, who added that the project shouldn’t be seen as “just ‘the robot club’” but instead as a means of working on a team.