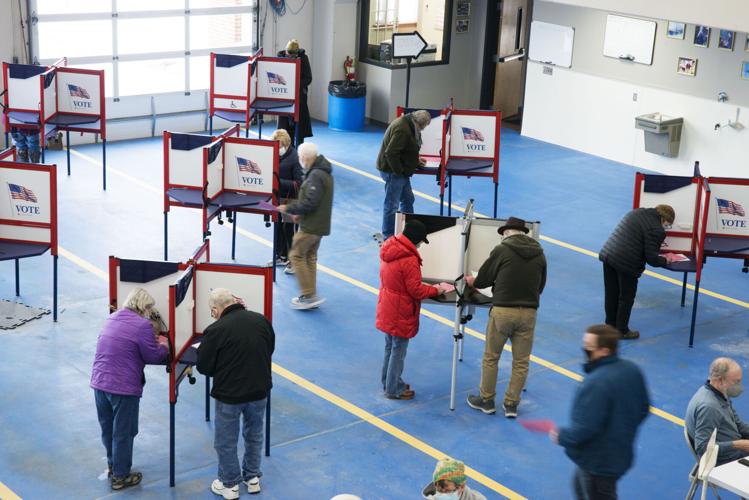 Bennington voters cast their ballots at the firehouse during Tuesday's election. 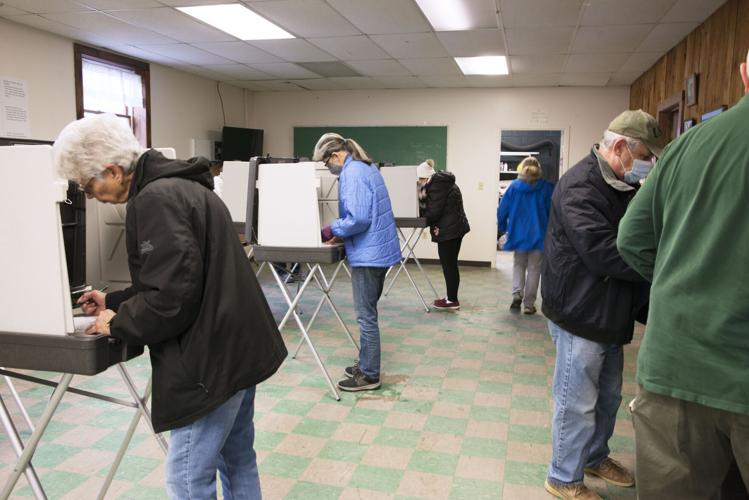 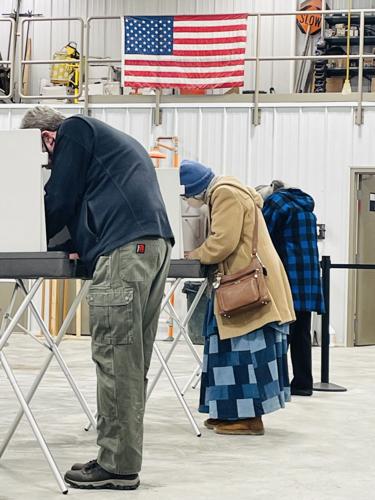 Voters cast their ballots in Shaftsbury's annual election on Tuesday.

Bennington voters cast their ballots at the firehouse during Tuesday's election.

Voters cast their ballots in Shaftsbury's annual election on Tuesday.

Turnout for the annual election was “terrible,” Barbeau said about a half-hour before the polls closed. About 1,600 voters had turned out at that point, down from an average turnout of about 2,500 in Bennington and a high turnout of about 3,500.

The clerk and others at the polls said the turnout could reflect the lack of a high-profile issues on the ballot, such as past proposals to create a mayoral form of government in Bennington.

Several candidates stood outside the polling place for much of what was a brisk election day, with Haley the last candidate standing for the last half-hour or so.

Resident Nancy White, a former Select Board candidate, stood nearby with a sign urging that the town budget be voted down because of an increase.

Election Day also featured a heated confrontation between perennial political candidate and gun rights advocate Kevin Hoyt and former state Rep. Chris Bates, as Hoyt was recording a video outside the polls at the Bennington Firehouse.

At one point, Hoyt noticed that he was being recorded in turn by Bates and then appeared to slap a camera out of Bates’ hand. A recorded confrontation followed, with each hurling insults at the other.

Bates afterward filed a complaint about the incident with Bennington Police.

Chief Paul Doucette later told the Banner that he viewed a video of the encounter but had not yet seen the incident report.

Jenkins and Conner were first elected to the board in 2016, running as a team. Jenkins is the current chairwoman and Conner the vice chairwoman.

Jenkins listed her top priorities as increasing housing options in the downtown area with attention to a range of price points, demographic needs and different styles of housing; continuing efforts toward community policing and implementing the town’s vision statement; and continuing to increase recreation opportunities in partnership with the YMCA.

"I am so grateful to the Bennington voters for putting their trust in Jeanne, Tom and me," Jenkins said after the election. "We will continue to work for Bennington and to further the initiatives that are underway. We look forward to continuing to working with everyone in Bennington to make our community the best it can be."

Among her priorities, Conner said during the campaign, are the ongoing community policing process; efforts to expand recreation and community options at the Recreation Center and the former Bennington High School building — now being renovated for multiple new uses; and planning for use of the American Rescue Plan funds, through which Bennington is expected to receive $3.9 million in federal pandemic relief funding.

The town’s problems “are going to take a multifaceted approach if we are going to make headway, and the town cannot do it alone,” Haley said during the campaign. “We must work with our community partners to address these issues.”

He said, “Our efforts in community policing must be ongoing. We’ve made a lot of strides, but we still have work to do. Citizen involvement is critical in rebuilding the trust between the police and many members of our community.”

Haley said he supports “citizen oversight of the department by people who have been properly trained to do so,” adding that the state is formulating such training.

Concerning a declaration of inclusion adopted by the Select Board, Haley hopes it will “become a tool toward expanding these efforts beyond police reform, and I encourage other organizations and businesses in town to adopt their own.”

Haley was born and raised in Bennington. He is a past chairman of both the town and county Democratic committees, and also serves as a justice of the peace. He is a member of the board of directors of Rights and Democracy Vermont.

"I am tremendously gratified and humbled that the voters of Bennington have entrusted me with a full term," he said after the votes were counted. "I'd like to thank Tina and Peter for running. I hope that they will continue to stay involved in making Bennington the best town she can be for everyone."

Voters approved the legal sale of retail cannabis and the purchase of a rail trail from its private owners on Tuesday, but turned down an advisory question on building a $14 million, 74,000 square-foot field house for Dana L. Thompson Memorial Park.

The rail trail was previously a controversial issue in town, but proved less contentious when it came time for voters to decide whether to allocate $120,000 for its purchase and $50,000 from the town CIRC fund for improvements. It passed by a wide margin, 714-230.

The Northshire Community Field House advisory question did not fare as well, with 455 voting in favor and 491 opposed, according to unofficial results.

During an informational online town meeting on Saturday, residents expressed environmental concerns about the choice of propane as a heat source, the lack of an indoor pool, and about the fact that the permitting process was moving forward before the advisory vote was taken.

If enough towns approved the plan, proponents would have sought bond funding to go along with $3.5 million from the Right Track Foundation and other private funds.

The initiative was also defeated in Danby, 332 against to 198 in favor, and in Dorset, 208-100, according to unofficial results from those towns.

Manchester voters approved everything else on the warning, including voter appropriations to the Manchester Community Library and the Northshire Day School, a $50,000 allocation from the CIRC fund to complete the Manchester Skatepark, and bond authorizations for a sewer line extension on Main Street and water line replacement on Richville Road.

Selectboard members Greg Cutler and Laurie Kunz ran unopposed. Cutler, the board’s vice chair, was reelected; Kunz, who was appointed to fill the term of Wayne Bell after Bell retired last year, was elected in her own right.

In Arlington, incumbent school board member Nicol Whalen was returned to the board, as she defeated challenger Luke Hall by a vote of 420-118.

Jessica Bachiochi was also elected to the board, as she ran unopposed. In Arlington Select Board races, incumbent Cynthia Browning beat Joe Gervais, while Jamie Paustian defeated Vincent Thompson for the seat being vacated by Mathew Bykowski.

Arlington voters also passed the proposed school and town budget items, and approved the creation of a climate mitigation fund. But they turned down a $50,000 appropriation for that fund.

In Dorset, voters defeated an advisory article asking for support for the proposed field house in Manchester on a vote of 100-208. There were no contested races for select board or other seats; voters overwhelmingly approved the highway and general fund budgets on a vote of 286-24.

Dorset voters also appropriated funding for the various article requests, including the Neighbor to Neighbor program, Southwestern Vermont Council of Aging, and others.