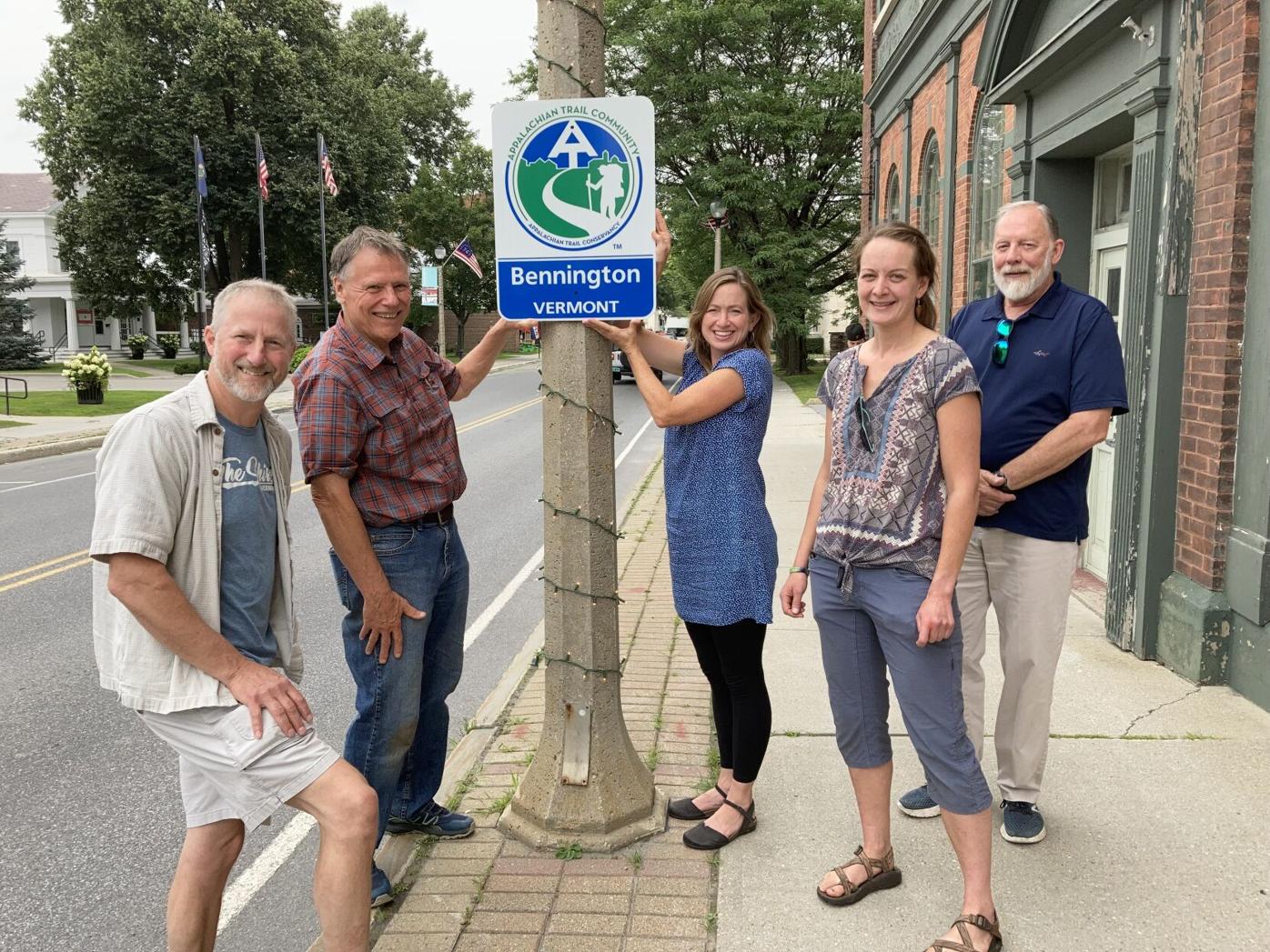 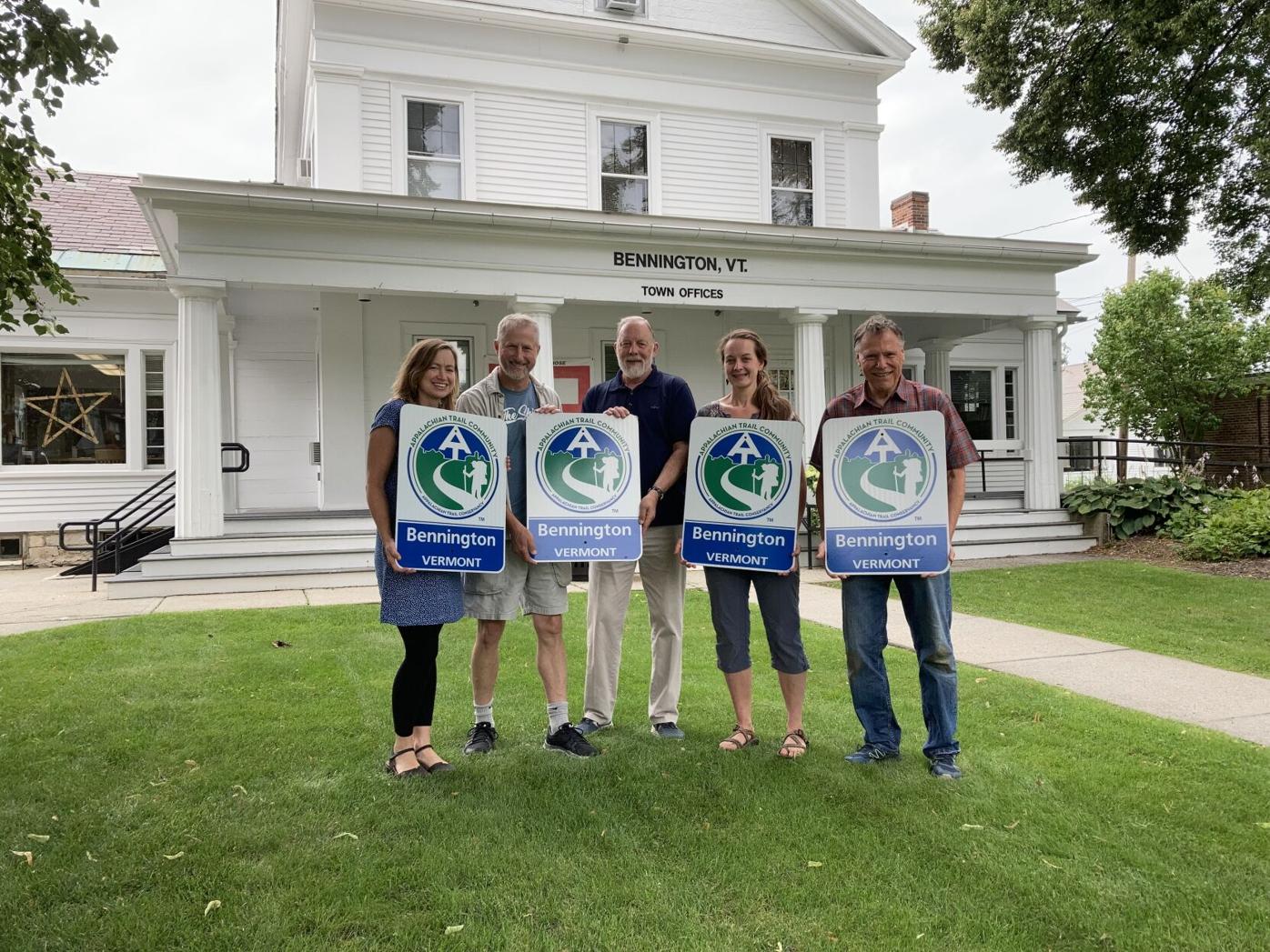 BENNINGTON – Gaining Appalachian Trail Community designation for Bennington required months of work by local volunteer committee members – especially after the COVID-19 pandemic struck during the application process – but now the group is immersed in some of the more enjoyable tasks.

Steve Love and Sylvia Cassano, co-chairs of the group, along with town Community Development Director Shannon Barsotti, Jonah Spivak and Michael Wajda, said they are determining spots where the metal signs would get plenty of notice.

The blue and white signs are aimed at visitors, thru-hikers and residents of the area who might be interested in hiking or helping to preserve or promote the trail.

Once traffic and other regulatory logistics are worked out, committee members said signs likely will be placed where traffic slows near the downtown along the entrances into Bennington from the south, west and east.

Spivak and Cassano said other signage also is being considered to direct hikers accessing the AT from Bennington or coming off the multi-state trail – especially those looking for a meal, supplies, entertainment, local historical or other attractions, or just a shower and a break from a their trek in a local motel or other facility.

Barsotti and other local officials have emphasized the potential economic impact of the trail community can have. After the group learned last fall that Bennington’s application had been accepted by the Appalachian Trail Conservancy, which administers the trail community program, Barsotti said that the town “will be listed in AT guidebooks, social media sites, and websites … We hope that this recognition will bring more business to our downtown and help make Bennington a destination for outdoor recreation.”

As part of the process of promoting local services, the committee is working on a map of businesses that will be posted online and in paper form with business owners, and at AT shelters north and south of Bennington. That is expected to be completed soon, Spivak said.

Events being planned locally next month include a pot luck meal and meeting at Willow Park, Cassano said.

The Green Mountain Club, which maintains the trail and Vermont’s Long Trail and assisted the committee in applying for AT Community status, will hold Long Trail Day on Aug. 28, a fund-raising event

The A.T. Community program is designed to recognize towns and cities that help promote and protect the trail. The program serves to support regional collaboration to grow outdoor recreation economies while amplifying stewardship opportunities to protect the trail and adjacent lands.

Bennington formally became the 49th trail community during an online ceremony in June.

The Appalachian Trail is 2,193.1 miles long, running through 14 states from Georgia to Maine, including about 150 miles in Vermont.

The AT passes along the eastern side of town with a main access route off Route 9 near the Woodford line. It co-aligns with Vermont’s Long Trail in the Bennington area.

Among other AT designated communities in this area are Manchester and the Berkshire County, Mass., communities of North Adams, Cheshire and Great Barrington.

The trail, the longest hiking-only footpath in the world, is a unit of the National Park System. It attracts more than 3 million visitors annually.