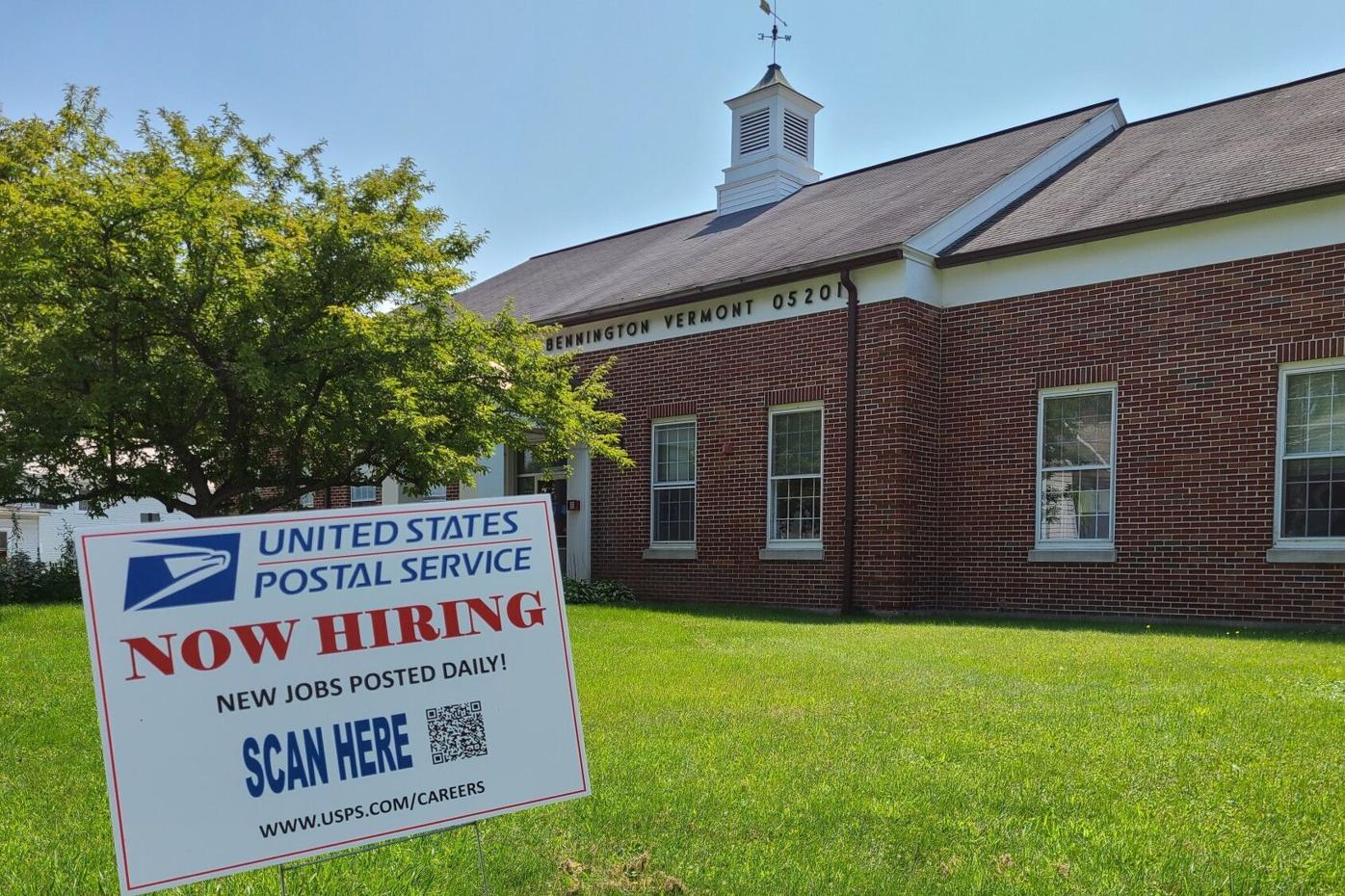 Signs outside the Bennington Post Office on Elm Street are advertising that the United States Postal Service is hiring. A shortage of employees reportedly led to Pownal residents not getting their mail all last week. 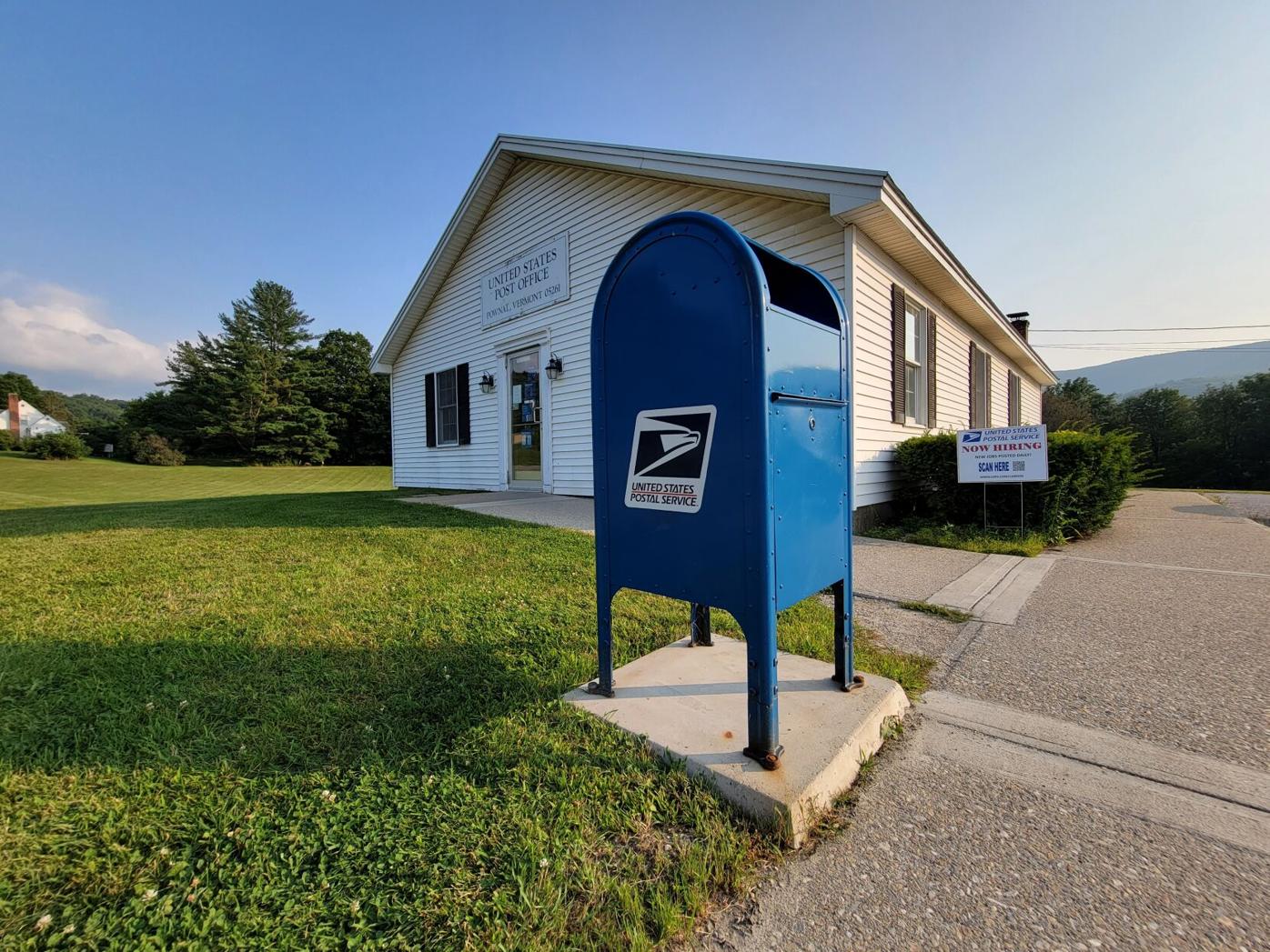 Signs outside the Bennington Post Office on Elm Street are advertising that the United States Postal Service is hiring. A shortage of employees reportedly led to Pownal residents not getting their mail all last week.

POWNAL — Residents here are upset that their mail wasn’t delivered at all last week to rural delivery customers, while the town’s rural route carriers were on vacation.

Word started to spread across town last week that the mail hadn’t arrived and wasn’t coming. And a number of Pownal residents contacted the Banner late last week and over the weekend, saying that their outgoing mail hasn’t been picked up and deliveries hadn’t arrived for a week.

Local lawmakers are noticing, too

“Yes, I have heard about the problem,” state Rep. Nelson Brownell of Pownal wrote in an email on Monday. “They are stating it’s a staffing problem and have been trying to hire people to help them improve delivery times. I have seen signs out in front of the post office requesting people to apply.”

Brownell, D-Bennington-1, said he hasn’t been affected personally since he has a post office box. But he’s heard from about three residents so far about the delays. “It seems they don’t get any mail, then receive a bundle all at once,” he said.

Sen. Dick Sears, D-Bennington, said he hadn’t heard from Pownal residents, “But have had complaints from many other areas, including my own neighborhood.” Sears lives in North Bennington.

“I have spoken to the workers. It seems there are only five rural carriers for Bennington County,” Sears said. “When someone is ill or on vacation they don’t replace them.”

“My mail has been delayed the entire nine days, except for some things that we managed to get from the Bennington post office directly,” Karl Austin of Pownal said in an email.

“They allowed both Pownal mail carriers to take leave this week without replacements. This was not a COVID exposure or emergency scenario. They are on vacation,” he said Sunday.

Austin and others alleged that the Postal Service simply decided not to deliver the mail in Pownal last week.

“To make matters worse, they are unwilling to locate any late mail and give it to customers at the post office itself,” Austin said. “The workers at the Pownal post office told me that they are getting nonstop complaints, even though they are completely uninvolved in mail delivery now.”

Jenny Dewar of Pownal also said her mail was not delivered. But she was just as concerned that there was no formal notice from the post office that deliveries would be delayed. Most residents found out why their mail didn’t arrive on social media, she said.

“For days on end I was getting [email] notices that packages had arrived,” Dewar said. “I knew something was up.” They had arrived, but not delivered.

“I talked to people along Carpenter Hill Road,” Dewar said. “I posted about it on Facebook and other people writing said they hadn’t gotten theirs either.”

Dewar went to the post office in Pownal on Monday and was told the past week’s mail was being delivered to customers. Along her road, “mailboxes were stuffed,” she said. And the bundle of mail for her home and business included mail for other people along the road.

The lack of notification troubled Dewar the most.

“I am angry we weren’t notified we could go to the post office and pick up our mail,” she said. “I’ve seen notices that they’re hiring. I get that it’s a struggle. But they could have alerted us that we need to come in to get our mail. That’s what annoyed me.”

It’s not the first time that the mail has been late in Pownal, other residents said.

James Gardiner, who moved to town four years ago, was surprised the first few times his mail wasn’t collected or delivered, despite the raised flag on his mailbox.

“Then I noticed a pattern. It would be two days, three days [with no delivery]. Then it came to a point where, quite a few times a year, it seems three days go by [without mail],” Gardiner said.

The boiling point was when an outgoing bill sat in the mailbox for three days, putting Gardiner in arrears with a vendor.

Gardiner asked the carrier what happened. “He said, ‘I went on vacation.’ I thought to myself, ‘That’s odd — the guy goes on vacation, why isn’t someone filling in for him?’”

Questions for Bennington Postmaster John G. Harwood IV sent to an email address listed on the USPS site bounced back as undeliverable, and no one answered the phone at the post office Tuesday.

“This has been an extraordinary year of unprecedented challenges given the COVID-19 pandemic, and we continue to experience challenges with employee availability,” Doherty said in an emailed statement. “As a result, staffing is occasionally impacted, and we thank our customers for their understanding and continued support.”

Doherty said the USPS has been using overtime, reallocating employees from across the state, and aggressively hiring to fill local needs. “We currently have some new employees in the on-boarding process, which should alleviate this problem,” he said.

“In the interim, customers may see their mail arrive later in the day due to employees unfamiliar with the territory. We appreciate our customers’ patience and understanding, and we’re proud of our more than 630,000 employees who are working to deliver for our customers during the pandemic.”

Meanwhile, U.S. Rep. Peter Welch, D-Vt., U.S Sen, Patrick Leahy, D-Vt., and U.S. Sen. Bernie Snaders, I-Vt., all said they have gotten wind of the delay in the past week and are looking into the matter.

“[Sen. Leahy] has heard from several Vermonters about this and his office is making inquiries with USPS,” Leahy spokesman David Carle said.

Arianna Jones, a spokesperson for Welch, said the delegation is working to assist constituents with these issues, and that Welch “recognizes that a lot of these problems are symptoms of the institutional challenges the USPS is facing.”

“Rep. Welch believes the Postal Service is a pillar of our democracy and essential for providing critical services, especially in rural America,” Jones said. “Americans rely on the Postal Service to vote by mail, send and receive checks, receive their prescriptions, and run their businesses. He strongly supports the mission of the USPS and will work with the Biden administration and Congress to fully restore its service.”

“There is no question that even one week of delayed mail service can be devastating to Vermonters in rural communities like Pownal,” Sanders said in a statement. “Vermonters across the state, from veterans and small businesses to seniors and families, rely on the timely delivery of the mail for necessities like medicine, Social Security checks, and to pay their bills.

“For far too long, our dedicated local postal workers have been working extended hours without support from their leadership or the benefits they deserve. I have repeatedly demanded answers from Postmaster General Louis DeJoy and will continue to fight to protect and strengthen the U.S. Postal Service,” Sanders said.