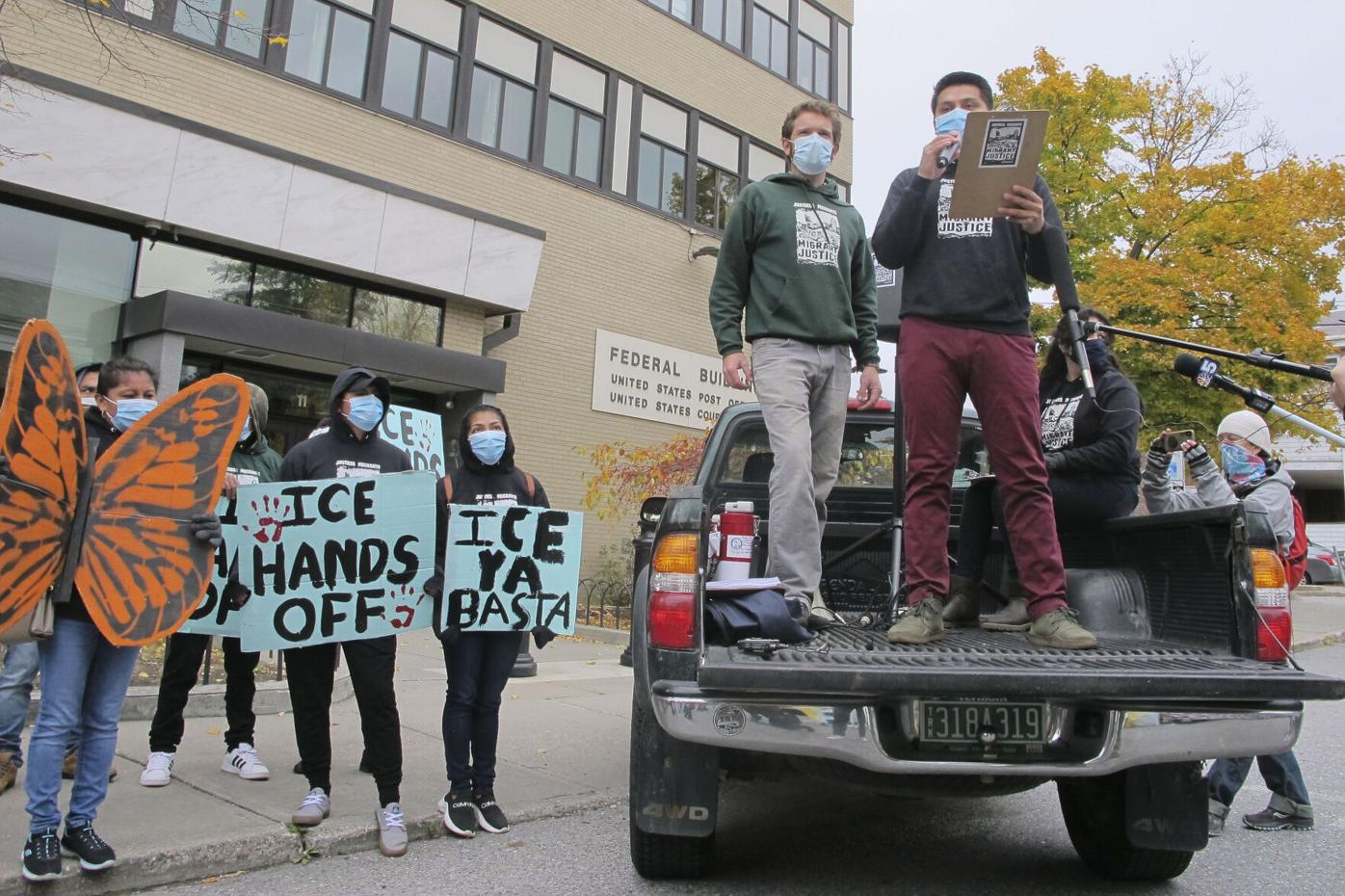 Enrique Balcazar, of Migrant Justice, an advocacy group representing immigrant farmworkers in Vermont, speaks to a crowd outside the federal court on Wednesday in Burlington. U.S Immigration and Customs Enforcement has agreed not to deport Balcazar or two other activists in a settlement of the activists’ lawsuit accusing the federal government of targeting them in retaliation for their activism. 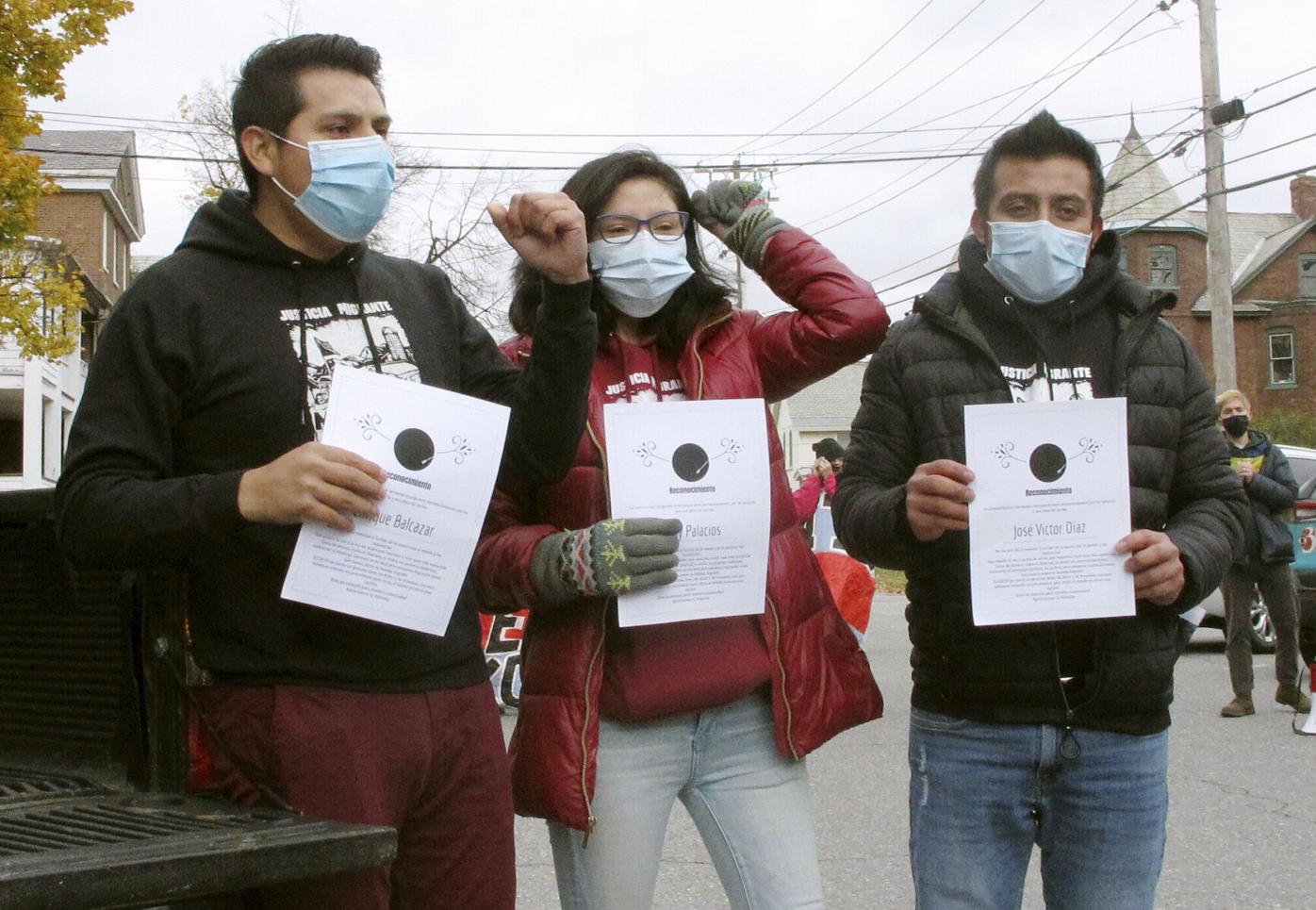 Enrique Balcazar, of Migrant Justice, an advocacy group representing immigrant farmworkers in Vermont, speaks to a crowd outside the federal court on Wednesday in Burlington. U.S Immigration and Customs Enforcement has agreed not to deport Balcazar or two other activists in a settlement of the activists’ lawsuit accusing the federal government of targeting them in retaliation for their activism.

BURLINGTON — The federal government has agreed not to deport three immigrant activists in Vermont who sued two years after they were arrested, saying they were targeted in retaliation for their activism, according to the settlement filed Wednesday in U.S. District Court in Vermont.

As part of the settlement in the lawsuit against U.S. Immigration and Customs Enforcement and the Department of Homeland Security, ICE will also pay $100,000 to be split among the three plaintiffs.

“ICE tried to terrorize us by going after our leaders,” said plaintiff Victor Diaz, a member of Migrant Justice, an advocacy group representing immigrant farmworkers in Vermont, at a rally outside the federal courthouse on Wednesday. He spoke in Spanish as a translator interpreted.

“They tried to divide us by going after our organization. They tried to silence us, but with this settlement we are saying that we will not be silenced,” he to cheers among the crowd blocking part of a downtown street.

During the rally, a driver who wanted to drive through the street blocked by activists holding signs yelled at them to get out of the way, pulled out a machete and from the driver’s seat banged it on hood of his vehicle. Leaders urged activists to get out of the way and let the vehicle pass as he zoomed through.

Afterward, Thelma Gomez, of Migrant Justice, said what happened was a clear example of what happens when the people rise up to defend their rights.

“Not everybody’s going to like it, but we can’t be scared and we can’t retreat,” she said through an interpreter.

Burlington police arrived a short time later, and an officer talked with an activist. Police said later that nobody was willing to make a statement about what they observed.

One of the three plaintiffs, Zully Palacios Rodriguez, said when the lawsuit was filed that she and a fellow Migrant Justice member were arrested by armed undercover agents as they were leaving the group’s office in Burlington in 2017.

Before the arrest, she said, ICE tried to enter her email account and used a confidential informant to spy on the group’s members and gather information about them.

In January, the Vermont Department of Motor Vehicles agreed to change some procedures and to undergo monitoring and training for workers to settle a lawsuit filed by Migrant Justice accusing it of giving information about immigrant farmworkers to federal authorities, leading to arrests and deportations.

The group had pushed for access to driving licenses for immigrants, many working on dairy farms, who were in the country illegally. Vermont passed a law in 2013 allowing immigrants to get driver privilege cards the following year.

The department was accused of coordinating with ICE to assist with the arrests of people arriving at motor vehicle offices for scheduled appointments. At the time of the settlement, the agency commissioner said she was pleased her department was able to work with Migrant Justice on an agreement.