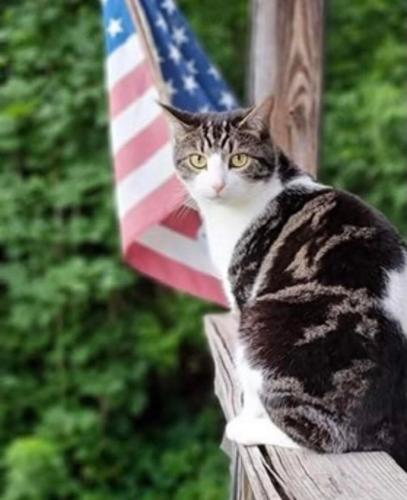 Marley the cat was killed by a hit and run driver on Highland Avenue on Wednesday, his co-owner, Karen Loomis, said. 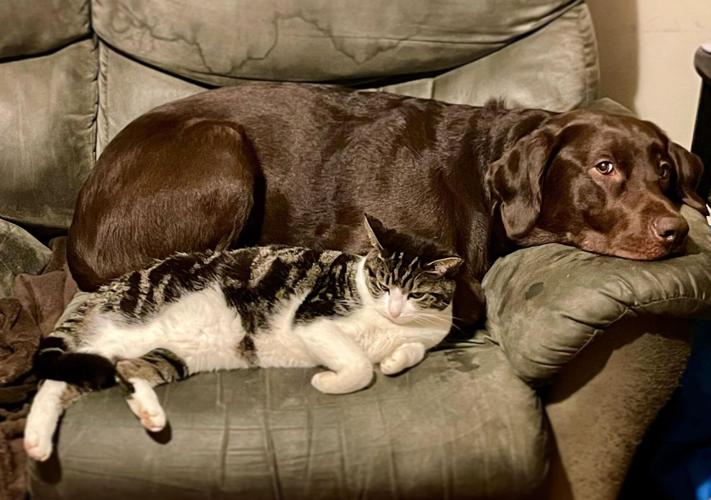 Marley the cat cozies up with his friend Milo in this photo provided by Karen Loomis. Marley was struck and killed by a hit and run driver on Wednesday night, his owners said.

Marley the cat was killed by a hit and run driver on Highland Avenue on Wednesday, his co-owner, Karen Loomis, said.

Marley the cat cozies up with his friend Milo in this photo provided by Karen Loomis. Marley was struck and killed by a hit and run driver on Wednesday night, his owners said.

MANCHESTER — Marley had been part of Karen Loomis and Tim Squire’s lives since he was 8 or 9 weeks old. A handsome 6-year-old black-and-white cat with a white vest, tiger-stripe spots, and a heart-shaped white pattern on his backside, he was named after reggae music legend Bob Marley.

But Marley was given a late-night burial by his human friends on Wednesday night, after a hit and run driver struck him on Highland Avenue, Loomis said. The cat’s untimely demise is renewing calls from residents on Highland Avenue and other town streets used as shortcuts for more speed enforcement.

The experience was traumatic for Loomis and Squire, an engaged couple who live on the Depot Street end of the street. Alerted by a neighbor at about 7:30 p.m. Wednesday, they went outside and found their beloved pet had sustained a fatal head injury.

“Burying your fur baby late at night because someone is being careless is awful and very heartbreaking! Please slow down people!” Loomis wrote on the Northshire Vermont Community Forum Facebook page.

Loomis and other residents commenting on the post are concerned that the consistent speeding could put children and other pedestrians on Highland Avenue at risk.

“I know accidents happen but no one stopped,” Loomis said in an interview Thursday. “I also know it’s not much of an accident when you’re speeding and being careless. There’s also kids on our road.”

“We recognize that speeding continues to be an issue on our community, and we will continue to utilize every resource possible to slow traffic down,” he said.

Earlier this year, Highland Avenue residents came before the Manchester Select Board, seeking a solution to unsafe speeds and unsafe pedestrian conditions on the steep hill leading to the Historic Depot District. It was suggested at that meeting that the town might try making the hill one-way to reduce cut-through traffic.

Emge had told the board that he walks his children from Highland Avenue to Manchester Elementary Middle School, and that conditions are currently “extremely dangerous” for pedestrians given the traffic on the road and the lack of sidewalks – especially on the hill that connects most of the road’s houses to the historic Depot district.

Loomis said her niece found Marley and his siblings as kittens, under a trailer with their mother cat. “We’ve had him since he was a baby,” she said.

She said Marley grew into a “beautiful cat with a spunky attitude” who liked to play with the couple’s other pets, Milo, a dog, and Homer, a cat. “Everyone loved him.”

“All we know is our cat got hit by someone who never stopped, unfortunately I didn’t see who,” she said. “My neighbor was outside and spotted my cat in the middle of the driveway dead. My friend had to come tell me the bad news. It was at dusk or right at dark. Vehicles fly up and down this road constantly. “

When the COVID-19 pandemic began, Blanchard said, police noticed a decrease in traffic, but an increase in speeding and other risky driving behaviors.

“It is not unreasonable to think that there is a connection between the absence of enforcement on our roadways during the peak of the pandemic and the increase in speeding complaints,” he said.

Since COVID restrictions ended, “it has proven to be a difficult task to reign in some of the bad driving behaviors that have increased in the last couple years,” Blanchard said. “In an effort to combat these bad driving behaviors, we have focused on areas that get the most frequent complaints, such as East Manchester Road, North Road, Barnumville Road, Beach Street, etc. We have also utilized state and federal grants for our officers to focus on safe driving in our community, and conducted several saturation patrols. “

Commenters on the Northshire Vermont Community Forum were sympathetic, and many offered their own concerns about speeding on secondary streets in town.

“I’m so sorry. We live on Barnumville and the speeding is out of control,” Christina Halpern said. “He looks like that cat that visits us nightly.”

“I feel the same when I walk from my house,” Pam Williams said. ”People need to slow down and realize their commute is other people’s neighborhood!”

“I lost my beautiful cat Sebastian on that road too,” Beth Montaufray said. “No reason to fly so fast up or down.”

“So very sorry. I live on Barnumville where the limit is 25 and people drive double that. I have complained many times and nothing gets done,” Cindy MacLeod said.