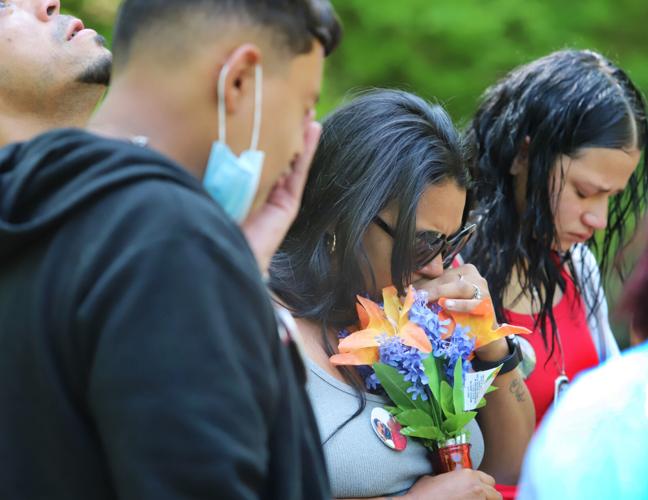 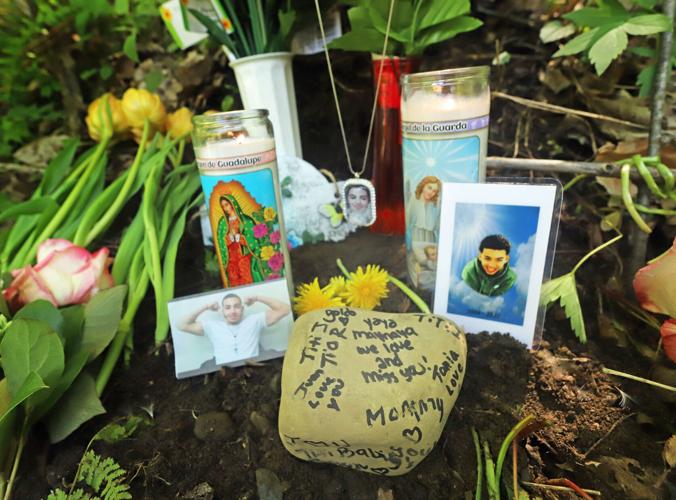 Makeshift memorial for Isaiah Rodriguez set up on Danby Mountain Road on Saturday after his family visited the site. 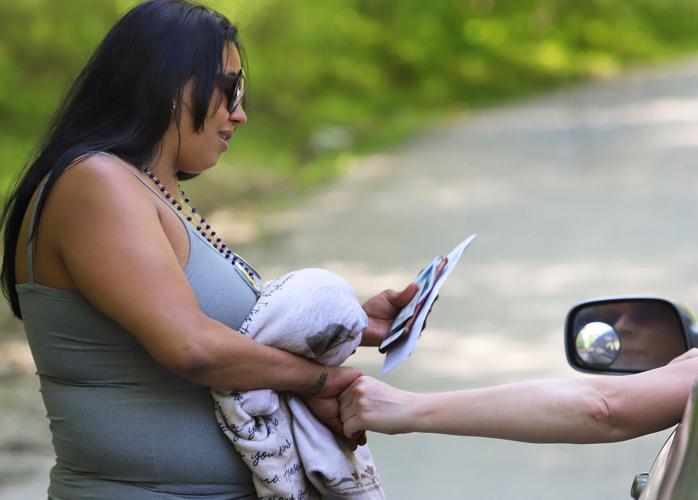 Isaiah's mother, Damarielys Rodriguez, is greeted by a local resident on Danby Mountain Road during her visit to her son's murder site on Saturday. 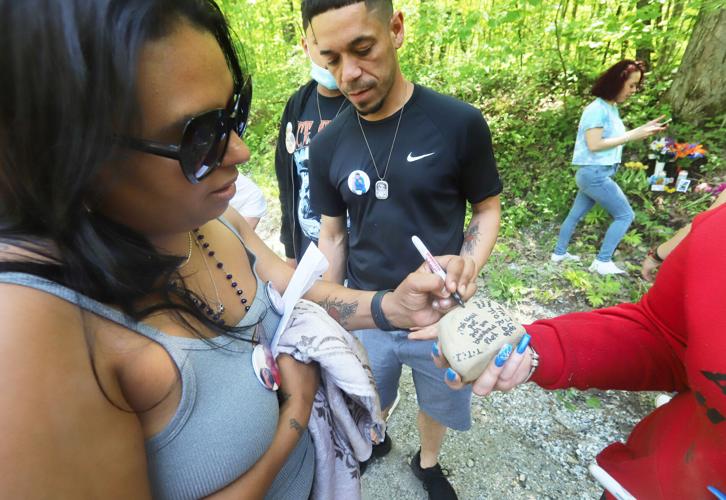 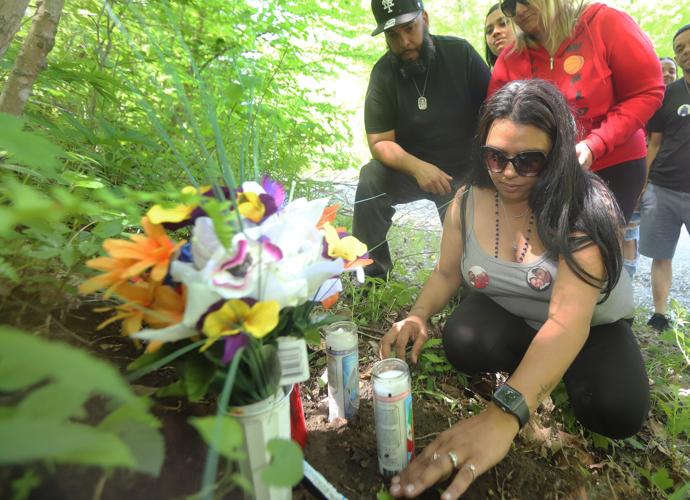 Damarielys Rodriguez, Isaiah's mother, places memorial to her son with other family members high atop Dandy Mountain Road, the scene of Isiah's murder.

Makeshift memorial for Isaiah Rodriguez set up on Danby Mountain Road on Saturday after his family visited the site.

Isaiah's mother, Damarielys Rodriguez, is greeted by a local resident on Danby Mountain Road during her visit to her son's murder site on Saturday.

Damarielys Rodriguez, Isaiah's mother, places memorial to her son with other family members high atop Dandy Mountain Road, the scene of Isiah's murder.

DANBY — The unmistakable sounds of grief and loss echoed through the quiet woods and wildflowers along Danby Mountain Road on Saturday.

It was the same place, months earlier, that the February snows retreated just enough to reveal the bullet-riddled body of a teenager from Springfield, Mass., lying on the ground 15 feet from the roadway. That early February discovery started a months-long murder investigation. When the winter snows finally retreated into the greens and warmth of a Vermont spring, a grieving mother paid a visit to the place it all happened.

The family of Isaiah Rodriguez, along with a Vermont State Police escort and, with their approval, the Banner, visited the remote site high up Danby Mountain Road Saturday morning, where police believe the 17-year-old was shot numerous times in the torso and left to die in early February. They brought balloons, blankets, buttons, photographs, candles and rosaries, creating a solemn memorial just steps away from where Isaiah fell, at the foot of an old pine tree.

There, they held each other gathered in a circle, praying, crying and releasing star-shaped balloons into the bright-blue, sunlit sky. The balloons hovered for a brief moment directly above the spot, then floated high above before ascending over the mountaintop.

“It was very important to come here today,” said Damarielys Rodriguez, Isaiah’s mother. “Just being here, knowing where he was at, where they left him, knowing he’s not lost in these woods somewhere, my baby. I know he was here today with us. I could feel it. I felt him strong on that ride up this road, and what he must have felt that day, and knowing we are finally here with him now, we can see Isaiah as we want to. I miss him tremendously.”

Isaiah’s mother, draped in a custom-made blanket strewn with photographs of her son, knelt over the simple memorial and, pressing her hand over the dirt, tears streaming behind oversized sunglasses, kissed a photo of Isaiah before placing it next to a rock found at the site, covered with messages for Isaiah from the family.

Just three days shy of his 18th birthday, Isaiah was found shot dead and discarded on the side of this rural dirt road high in the mountains in Danby. His frozen body was found lying in the snow about 10 feet from the roadway with multiple gunshot wounds to his torso. Isaiah was wearing a black winter coat and sport-slide sandals on his feet.

The Vermont Health Department released a death certificate soon after his body was found, confirming that he was killed on Danby Mountain Road, death caused by gunshot wounds to his torso. He was pronounced dead on Feb. 3, although police believe he was shot the day before, on Feb. 2. There have been no arrests.

“The investigation is proceeding well,” said Detective Sgt. Tyson Kinney of the Vermont State Police Major Crimes Unit and lead investigator on Isaiah’s murder case. “We are in the process of analyzing data that we’ve received. I am very confident that we are close, on the right track to find justice for Isaiah, and get the answers the family deserves.”When asked about a possible time frame for an arrest, Kinney said, “possibly late summer or early fall. That’s what we are hoping.”

Kinney, along with his boss, Detective Lt. John-Paul Schmidt, and Victim Services Director Kate Brayton, escorted Isaiah’s family up the mountain to the exact spot where Isaiah was found. According to Kinney, the area has changed since then, with the owners of the land choosing to put up an 8-foot dirt berm along the roadway that opens into their gravel field and a “Keep Out” sign at the end of the berm.

“The family welcomed Isaiah’s family to visit anytime,” according to Kinney. “They wanted me to tell you how sorry they were.”

As Isaiah’s family was finishing their visit, Kinney, Schmidt and Brayton all walked over to the makeshift memorial and placed flowers next to the candles on the ground.

“This becomes personal at some point,” said Kinney. “As a homicide investigator, we typically build a relationship with the victim’s family, but this is the first time I’ve ever personally attended anything like today. Just being here allows me to feel closer to them.

“They need to trust me. They need to understand that I have a job to do and that I am fighting for them and Isaiah. Having them allow me into their family, being here to honor Isaiah, it’s very special.”

At one point, a passerby stopped her car along the road next to Isaiah’s mother and, reaching out, grabbed hold of her hand, holding on tight for several minutes as they talked. Two women, hand-in-hand, their shared moment alone together, allowed for a smile from Isaiah’s mom and an exchange of cellphone numbers. Then she drove away, a heartfelt moment on an emotional day that started with tears and ended with a smile on behalf of a young man cut down before he got a chance to begin.

When asked if she thought justice would come for Isaiah and her family, Damarielys took a few moments to gather her thoughts before saying, not much above a whisper, “I hope so.”

Then the tears started to flow as she walked away. She stopped and, looking back toward where they found his body a few months earlier, took one last look.

“He was a good kid, my baby. I miss him terribly.” Then, clutching the blanket with her son’s face, she was finally able to walk away.