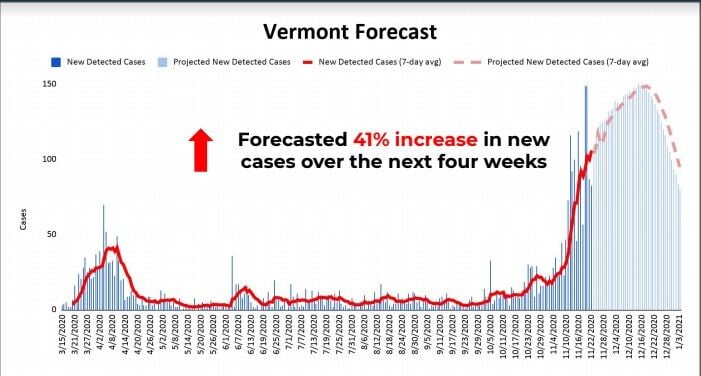 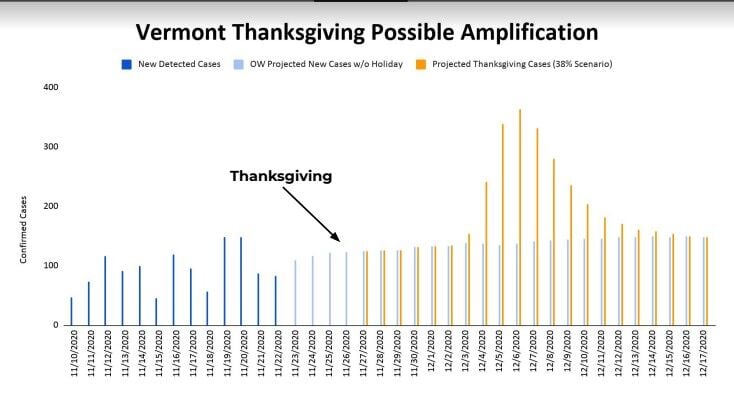 This chart shows a “worst-case scenario” surge if Vemonters travel or take part in large gatherings for Thanksgiving. 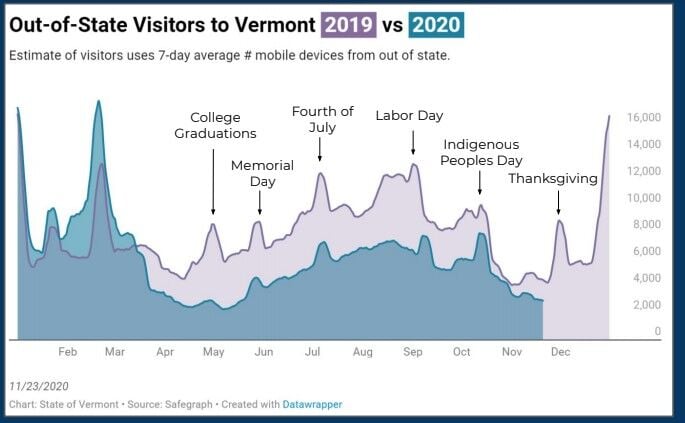 This chart shows an estimate of travel to Vermont over the past two years.

This chart shows a “worst-case scenario” surge if Vemonters travel or take part in large gatherings for Thanksgiving.

This chart shows an estimate of travel to Vermont over the past two years.

Students returning to Vermont schools after Thanksgiving will be asked to quarantine for remote instruction for up to two weeks if they take part in a multi-family gathering over the holiday, Gov. Phil Scott announced Tuesday.

Students and families will be asked if they were part of multi-family gatherings or traveled for the holiday. Those answering yes will be asked to spend 14 days at home, or seven days followed up with a negative PCR test, Scott said.

“We understand how difficult this is. But since we know these types of gatherings have been the cause of so many outbreaks, we’ve got to do all we can to slow this down,” Scott said. “We also strongly advise businesses to consider doing the same.”

Scott said he hoped families with children would consider whether Thanksgiving plans are worth one to two weeks of remote learning, let alone the health risks of transmitting COVID as the number of infections grows. “That would be enough of a deterrent, I would think,” he said.

“This is not meant as a way around the gathering ban,” Scott added. “It shouldn’t be used as an excuse to get together with other households.”

Reporters asked Scott what schools could do if families are less than truthful about their Thanksgiving activities, and whether the policy was in effect asking children to “tattle” on the families.

“If you don’t want your kids to have to transition to remote learning and quarantine for seven days maybe you ought to make other plans,” Scott said. “We’re asking people to tell the truth to protect others. I don’t think that’s tattling.”

“Schools operate on trust,” Secretary of Education Daniel French said. “We are hopeful this will give our schools additional tools to do the right thing and keep students safe.”

Scott announced the policy just before Commissioner of Financial Regulation Michael S. Pieciak laid out a worrisome worst-case scenario of how Thanksgiving multi-family gatherings and travel could lead to a surge over and above the cases the state is already projecting.

A national survey conducted by Ohio State University’s Wexner Medical Center found that nearly two out of five Americans plan to attend a holiday gathering with 10 or more people — and one-third do plan to ask guests to wear masks.

If travel results in Vermont reflected the survey, Pieciak said, the state could see between 3,200 and 3,800 additional cases of COVID-19, with between 40 and 50 of those cases requiring hospitalizations. “These are quite stark and quite disturbing,” Pieciak said.

“This is not a projection. This is really a worst-case scenario and we really need Vermont to respond so we don’t see anything like what we just mentioned,” Pieciak added.

French said school districts were informed about the plan on Monday afternoon. He said it’s possible that with the winter holiday season approaching, the Agency of Education might keep that policy in place to protect students and staff and keep schools open for in-person instruction.

Sending all students home for remote learning for two weeks following Thanksgiving was considered, but “the data continues to support operating in person safely,” French said.

Pieciak, in his weekly presentation of the latest data, pointed to the exponential spread of the coronavirus across the country as cause for concern. Twenty-six percent of all COVID cases in the United States have been diagnosed in November, he said.

But despite the continued growth of the virus, especially in Washington and Orange counties, the rate of increase in cases has fallen to 41 percent, Pieciak said.

“[That’s] all the more reason to avoid a Thanksgiving surge,” he said.

Scott started the briefing by offering condolences to the family of Mary Pat Brown of Bristol, who is one of the state’s 64 residents who have died of COVID-19 as of Tuesday. She left a husband and six children, and Scott said the family wrote to him about their grief over her loss, and about their sadness that they could not be with her as she fought the virus.

The family, Scott said, wanted him to talk about her story, hoping it might help other families make smart decisions.

“These deaths are not just numbers. They’re people love their families, contributing to their communities, and who are no longer with us. My heart goes out to the Brown family, and the families and friends of all those we’ve lost,” Scott said.

The state reported 85 cases Monday and 49 Tuesday, with five of 22 hospitalized persons in intensive care.

Scott took time to thank Vermonters who have been following health and safety protocols from the start, “even when it’s hard or feels unfair, or even when you disagreed with our approach.”

He also reached out to those “who want to do the right thing, but don’t quite see the risk” in having lunch or going bowling with trusted friends or having family over for dinner.

That underestimates the amount of COVID-19 in Vermont right now, and the fact that people can transmit the virus unknowingly, Scott said.

“So I’m asking you to help,” Scott said, again asking Vermonters not to gather and to put off Thanksgiving holiday travel. “If we can get through the rest of this year and widely distribute vaccines, we’ll be able to return to some sense of normalcy very soon. “

Scott, noting that he’s spent a lot of time of late focusing on Vermonters not following health and safety, said he wanted to recognize Vermonters who have been following the rules all along.

“We still lead the nation in the lowest number of cases and deaths and that’s because of all your efforts,” Scott said. “I know asking you to sacrifice again is frustrating, but there is light at the end of the tunnel and we will get there. “

“We understand how difficult this is. But since we know these types of gatherings have been the cause of so many outbreaks, we've got to do all we can to slow this down.”