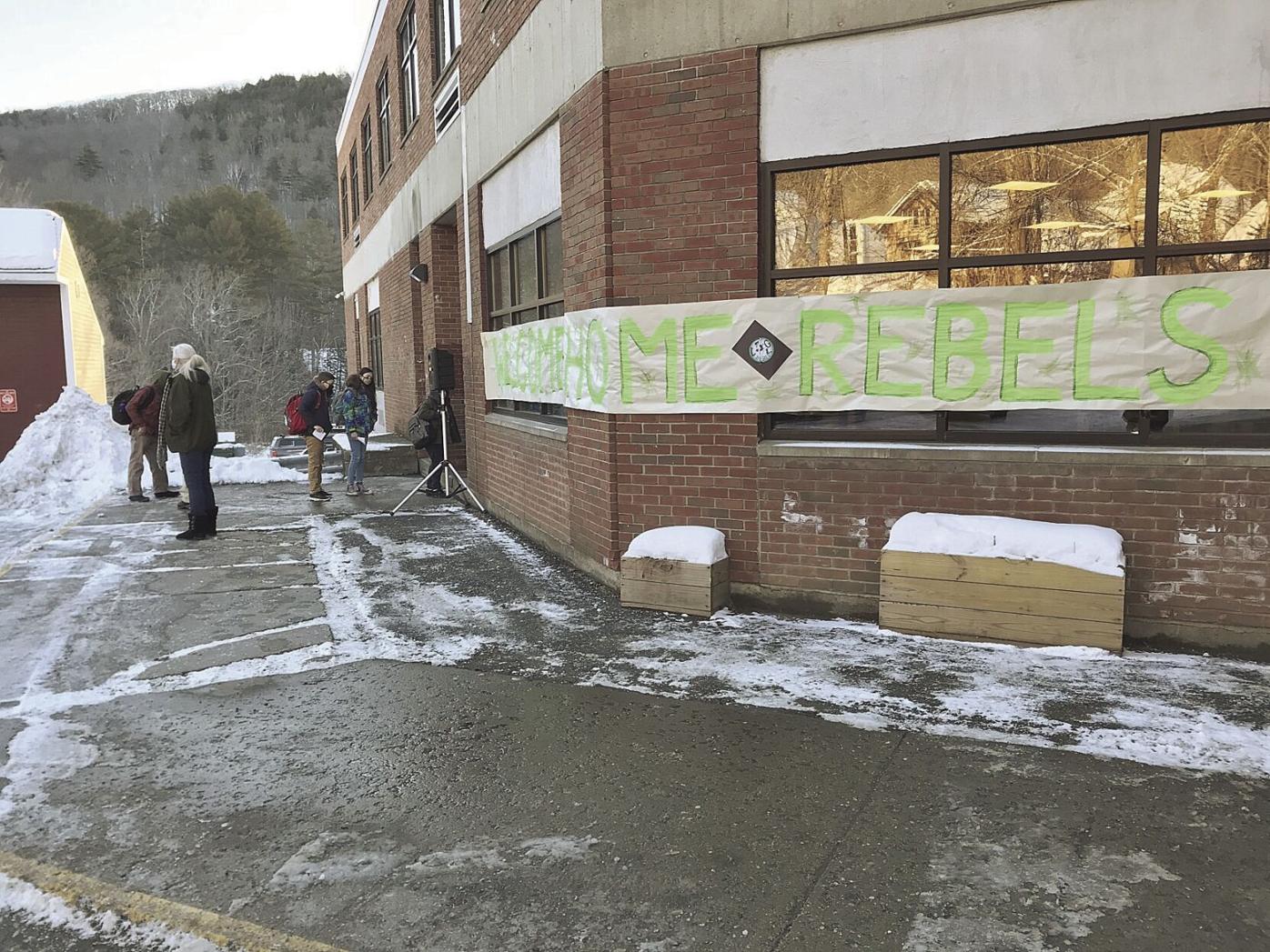 A banner and school staff welcomed Leland & Gray Union Middle and High School students back to in-person classes on Monday, Feb. 8, in Townshend. Principal Bob Thibault said he and a school counselor went door-to-door last fall, reaching out to students who had disengaged from remote learning, for whatever reason. 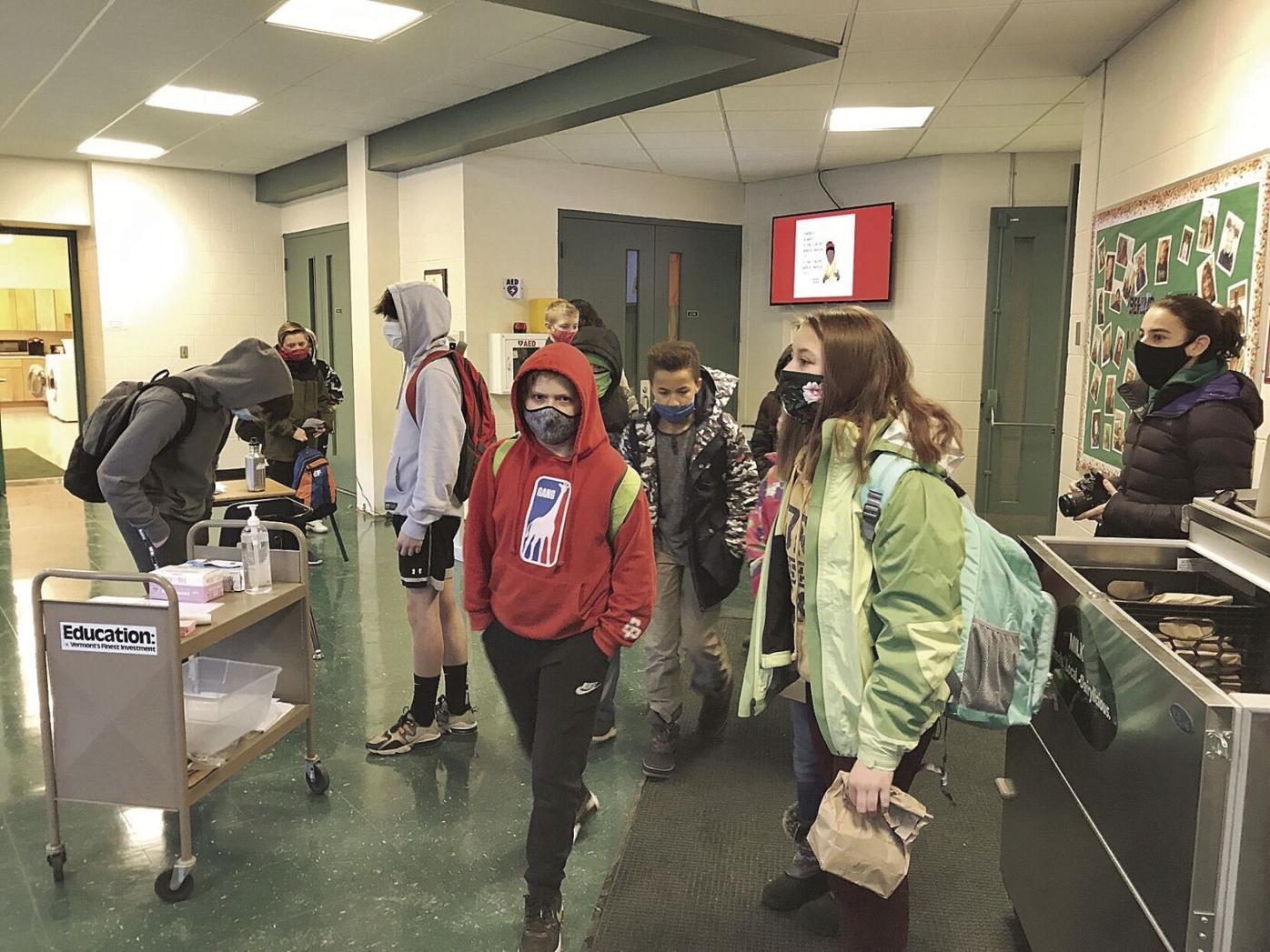 A banner and school staff welcomed Leland & Gray Union Middle and High School students back to in-person classes on Monday, Feb. 8, in Townshend. Principal Bob Thibault said he and a school counselor went door-to-door last fall, reaching out to students who had disengaged from remote learning, for whatever reason.

Education officials across Vermont say they’ll need help from the state in order to reconnect with chronically truant students that have “ghosted” school during the pandemic.

Convincing reluctant students to come to school can be a tough sell even under the best of circumstances. Throw remote learning and a public health crisis into the mix, and schools’ ability to connect with disengaged youth has become even harder.

“Learning is a social construct, always has been,” said Jay Nichols, head of the Vermont Principals Association. “That’s why Plato and Socrates were pretty successful teachers … Discussion, talking, clarifying your thinking, hearing the thinking of others — that’s how our brains are wired to work. And the less of that you have, the harder it is to learn.”

The Agency of Education is attempting to quantify the magnitude of the truancy problem through a survey it sent to Vermont school districts earlier this week.

Nichols said that, according to principals he’s talked to, truancy has definitely been on the rise since the beginning of the coronavirus pandemic.

Bob Thibault is the principal at Leland & Gray Union Middle and High School in Townshend, where students had, until a couple weeks ago, been confined exclusively to remote learning since the governor declared a state of emergency last March.

Thibault said a lot of his kids just kind of tuned out over the past year. He said those disengaged students fall into two buckets.

“One was: they come to class and their camera’s probably off, it’s the black screen. They may or may not do some work, but they’re dialing at least. We know they’re alive,” Thibault said. “But then there was a second group. The second group was the, ‘We don’t know where they are’ — the ones that have ‘ghosted’ us, if you will.”

That second group is the one that kept Thibault up at night. And so, late last fall, he and the school counselor hopped into Thibault’s Subaru and started traveling the rural countryside with a list of names to visit.

“You know, a lot of times we’d come up on houses [where] no one would come to the door; it was dark,” he said. “Sometimes there would be lights on, you could hear noises, but no one would answer the door.”

Other times, someone would answer the door. And Thibault would get to talk with either the student, or a parent, or whatever adult the kid happened to be living with.

What Thibault saw on those trips, he said, was heartbreaking.

Virtual learning, Nichols says, isn’t the only thing complicating academic life for students. The pandemic has also exacerbated financial stress for families that were already on the economic margins.

“A principal had told me that he went into Hannaford’s after school one day and saw two of his students working there who both had missed school that day,” Nichols said. “And they both were like, ‘Our parents lost their job. We got to work.’ What are you going to say to that kid?”

Principals across Vermont say retrieving the students they’ve lost during the pandemic is going to require more than just academic intervention.

Beth O’Brien, the principal at Richford Middle and High School in the Northeast Kingdom, said it’s tough to get kids interested in math or science classes when they don’t know if they’ll get to eat dinner that night.

“Education is higher up the hierarchy than the basic needs,” O’Brien said. “And we really need to focus on meeting people’s basic needs, and I think that’s what it’s come down to.”

Vermont’s truancy laws require students between the ages of 6 and 16 to attend school. But O’Brien said the threat of legal action against students or their parents is rarely an effective means to get them back.

“It’s not adversarial, it’s, ‘How can we work together in the best interests of the child?’” she said.

“Most importantly, it’s not about punitive measures. It is about, ‘We want you back, we need you back, we miss you when you’re not here, and what can we do to help you come back into the school environment?” Young said.

As COVID-19 vaccines roll out, schools are beginning to see glimmers of light at the end of the pandemic tunnel. And they’re starting to think about how they’re going to make sure all their students — especially the ones they’ve lost touch with — make it out the other side.

“We actually know exactly who these students are. It’s not as though we’ve lost track of them and don’t know where they are and what they’re doing,” Young said. “And for whatever reason the students are just not doing their classwork, they’re not signing into Google meets, they’re not coming in for their in-person days, and so it’s a real problem.”

Young said getting kids back into the school environment, and helping them make up all the credits they’ve missed in the meantime, is going to require a new kind of approach to learning.

“So this idea of a typical summer school, where kids are going to come in and sit down for two hours, for five days straight, for three weeks to get their English credit, I just don’t think is going to work,” he said.

What might work, Young and the other principals say, is assembling teams of counselors, educators and case managers, and conducting intensive and ongoing interventions in the lives of students and their families.

Thibault said he foresees a role for the designated mental health agencies that serve each of Vermont’s 14 counties.

“Wouldn’t it be great if each of those mental health agencies across the state could assign clinicians to school buildings?” Thibault said.

School administrators, however, say districts can’t be asked to assemble those resources on their own.

In a Feb. 9 memo to the Senate Committee on Education, the Vermont School Boards Association, Vermont Superintendents Association, Vermont Principals’ Association and Vermont-NEA wrote that “school communities cannot be expected to navigate the state’s uncoordinated agencies and departments to acquire the essential services their students need.”

“In regions lacking sufficient capacity among local and regional agencies, the state must guarantee targeted support in the form of financial and human resources,” the organizations wrote.

Heather Bouchey, deputy secretary of education for the Scott administration, said her agency is already working to assemble those resources on districts’ behalf.

And when it comes to addressing truancy specifically, she said the agency plans to help districts with what she calls the “whole-family approach.”

“And the idea is that unless we do this kind of proactive, whole-family approach, we’re really not going to be able to ... get at the root cause of what’s going on for our students who are not showing up,” Bouchey said.

The state will soon have some financial resources to make that happen: Vermont schools are slated to received nearly $13 million in pandemic recovery funds.

VPR is sharing its coronavirus coverage with news organizations across the region. More stories at VPR.org.