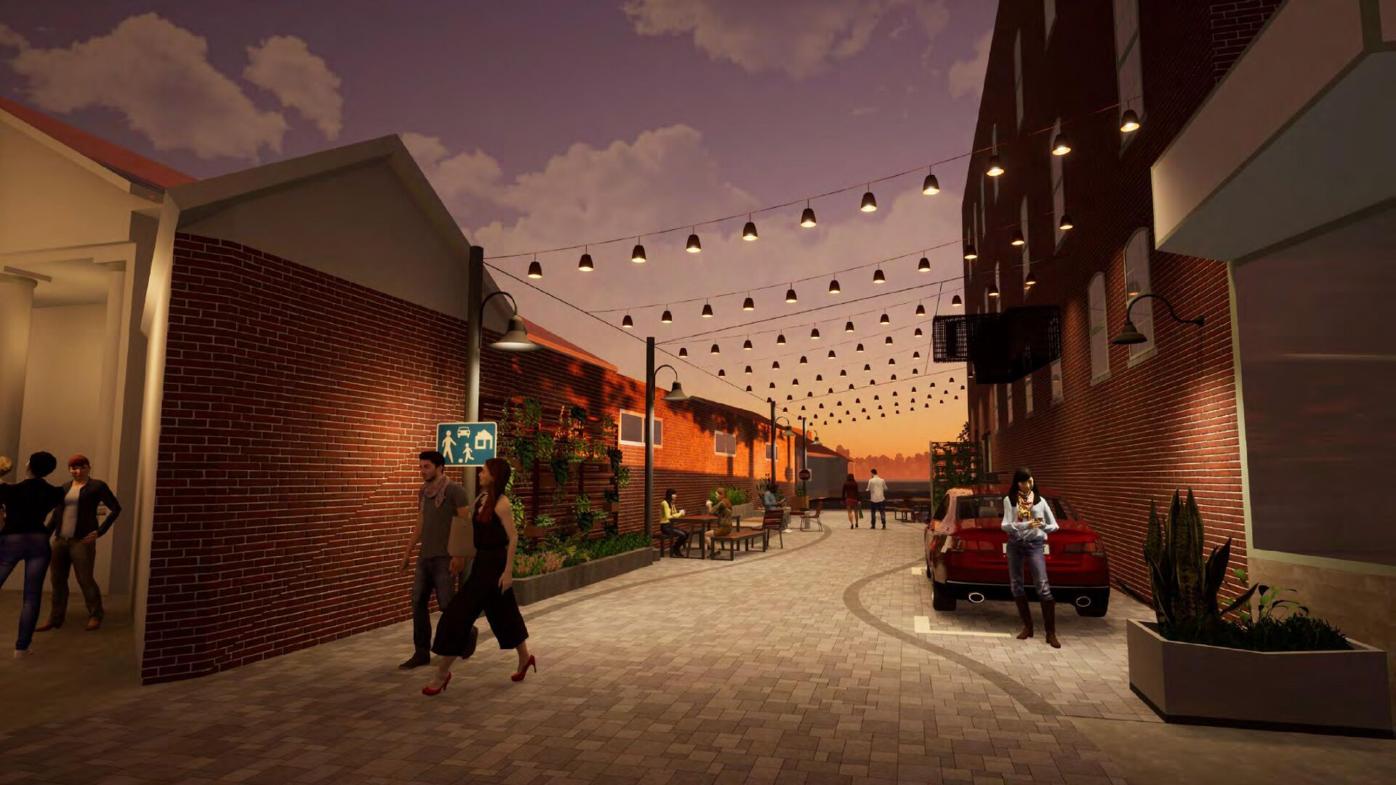 An earlier design for enhancement of the Franklin Lane section intersecting with South Street was rejected over a right-of-way issue but won praise from members of the Bennington Select Board this week. 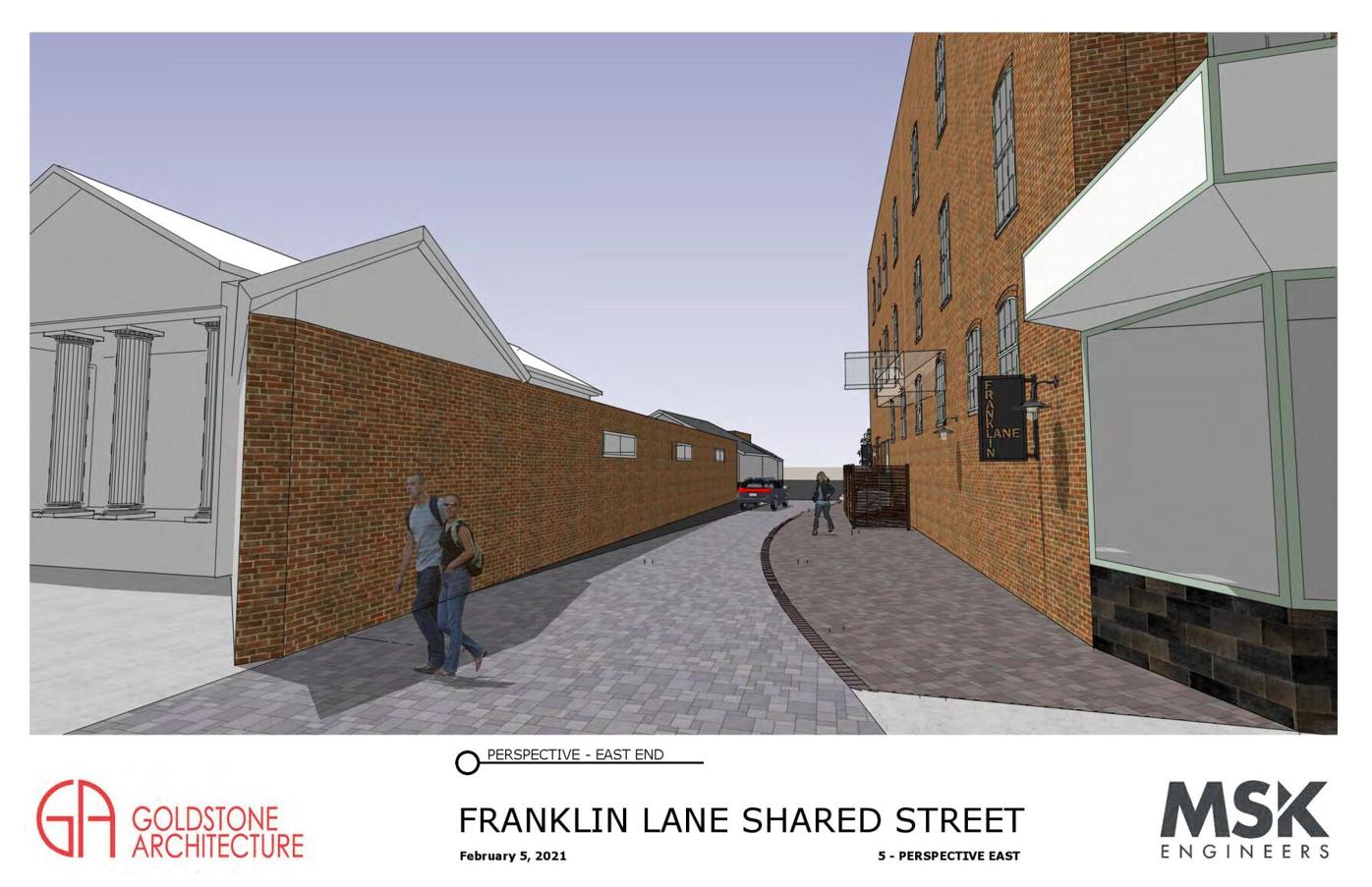 The approved conceptual design for an enhancement of the section of Franklin Lane in Bennington at the South Street intersection. The Select Board on Monday approved work toward a final design and putting the project out to bid. 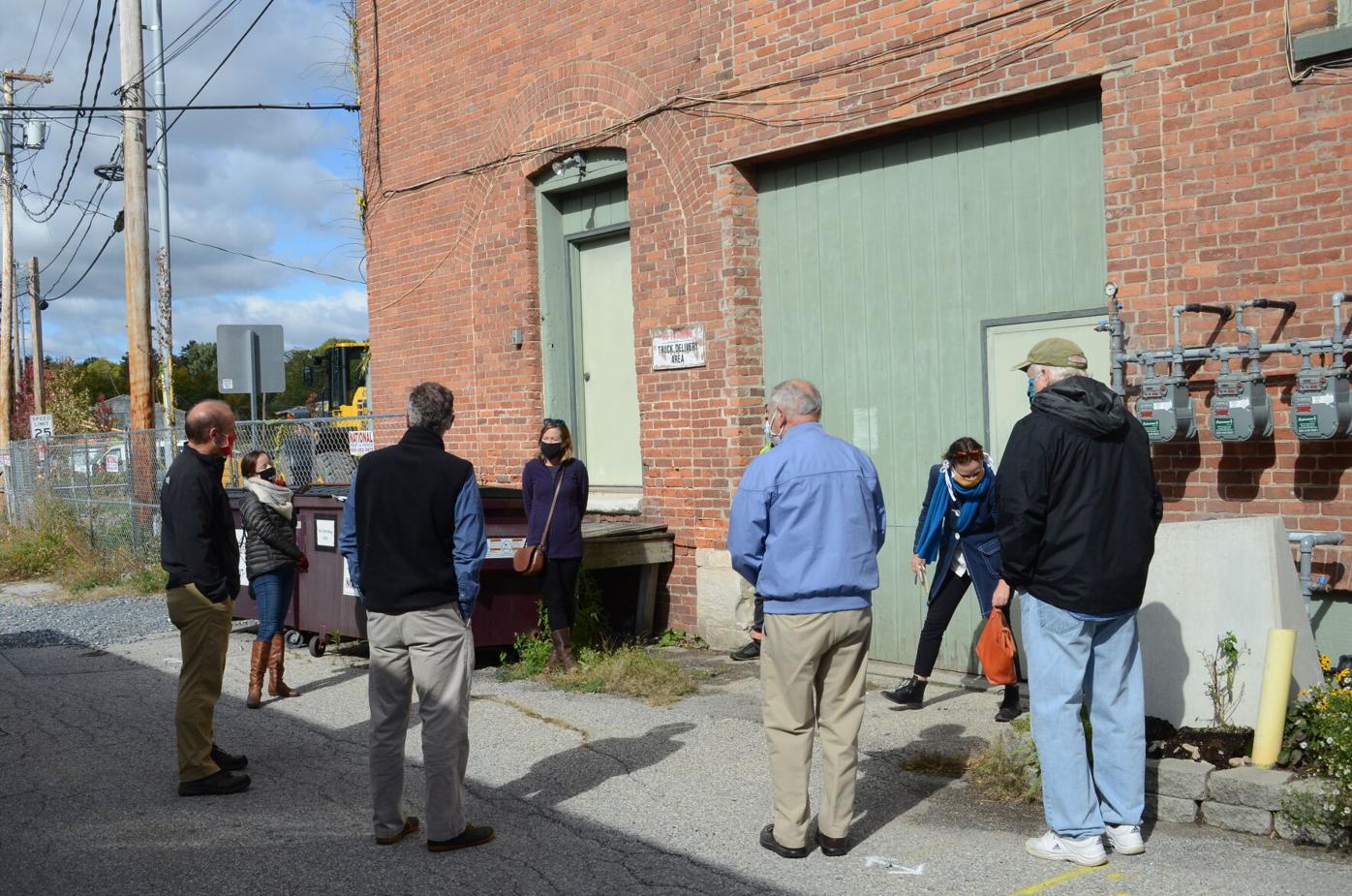 Participants gather next to the Drysdale Building on Franklin Lane in October to discuss ideas for redesigning the downtown alley.

An earlier design for enhancement of the Franklin Lane section intersecting with South Street was rejected over a right-of-way issue but won praise from members of the Bennington Select Board this week.

The approved conceptual design for an enhancement of the section of Franklin Lane in Bennington at the South Street intersection. The Select Board on Monday approved work toward a final design and putting the project out to bid.

Participants gather next to the Drysdale Building on Franklin Lane in October to discuss ideas for redesigning the downtown alley.

BENNINGTON — The Select Board has approved moving toward final design and construction for a grant-funded project aimed at enhancing Franklin Lane at the intersection of South Street.

However, board members expressed disappointment during a presentation this week that a more elaborate conceptual design prepared for the town by MSK Engineering and Goldstone Architecture was dropped because of opposition from an abutter.

With Select Board approval, Daniel Monks, the assistant town manager and planning director, said the town will proceed with final design of work to upgrade the alley between the Drysdale Building and a commercial building owned by David Buckley, with the goal of making the alley more attractive and safer for pedestrians and vehicles.

Work is expected to begin by summer, Monks said, with the project being undertaken by the town Department of Public Works working with subcontractors. He said the town also will continue to seek funding toward enhancing the entire length of Franklin Lane through to Washington Avenue.

Funding including a state Downtown Transportation Fund grant is in place, and the project will be ready to go to bid with a final design, Monks said.

Prior to actual construction on this initial Franklin Lane work, the town will continue to reach out to Buckley, who has yet to give permission for use of his narrow strip of right-of-way along the north edge of his commercial building, Monks said.

Among requests are to extend decorative pavers through the alleyway and up to the two buildings that border it.

Buckley also expressed “extreme opposition” to an early concept design with multiple lighting fixtures hanging on wires above the alley, Monks told the Select Board.

However, the town will finish the resurfacing where it has permission, he said, and add lighting fixtures mounted on the Drysdale Building, thereby fulfilling a principal goal of making a now-dark space more pedestrian friendly.

Reached this week, Buckley said he has some significant concerns about access for service vehicles in the future that might result from the pending changes, and his building and restaurant and other tenants require a range of deliveries.

He also owns another building further west on Franklin Lane.

Buckley likewise questioned why refuse containers now placed up against the Drysdale Building across the alley are not being moved inside or to the rear of that building as part of the design.

“My answer to them is, I can’t go along with that [design],” Buckley said. “I said, get a town grant to open a door in the Drysdale Building.”

He said a garage door size opening, now sealed off but visible, once provided access to the Drysdale Building. Reopening that doorway, which now is covered over, would allow for indoor storage of the refuse receptacles and remove an unsightly restriction from the narrow alley, Buckley said.

Gas meters on the outside wall of the Drysdale Building can’t be moved, but will be covered with screening, Monks said.

Jason Dolmetsch, president of MSK Engineering, provided a presentation about the project that included several concept images, the more elaborate of which proved very popular with some board members.

“I love the picture with the lights across the street,” said board Vice Chairwoman Jeannie Jenkins, of the discarded original design concept with hanging lights suspended over the alley. “That’s magical.”

Dolmetsch said a specific goal of project is to improve “the aesthetics and walkability of the street.”

Overall, he said, the design seeks to create what is called a “woonerf,” or shared space, in the Netherlands, for both pedestrians and vehicles. Typically, these designs use road curvature, ground patterns or plantings to calm traffic through the section, he said.

In this case, he said, the design includes darker pavers showing a curve similar to a roadway but it will be at the same level as the rest of the paver surface and there will be no curbs.

“There is no intention of limiting delivery and service access and we clearly stated this when discussing the project with stakeholders,” he said. “The intent is to make the alley safer for all users, including pedestrians as they are the most vulnerable.”

The officials said a design charrette was held in October to seek input from stakeholders, and the firms did a survey and some testing of the site.

Through January, the design team and Community Development Director Shannon Barsotti and others reached out to landowners, and some modifications were made to the concept plan.