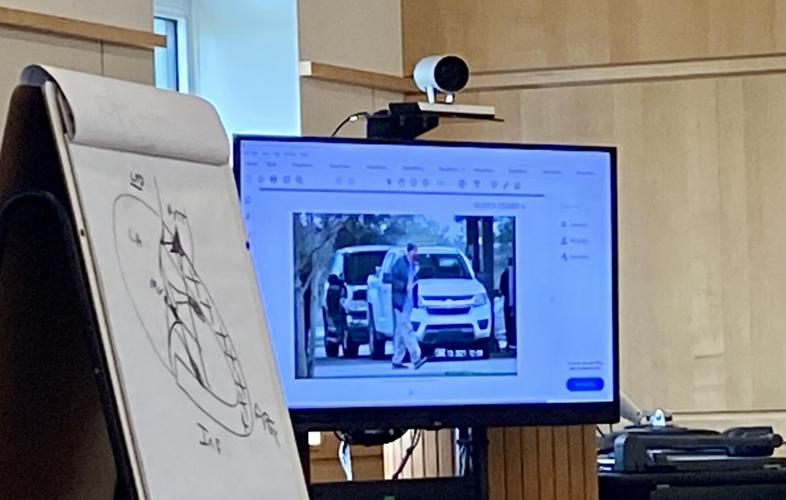 Defendant Leonard Forte, 79, is shown in a police surveillance video running errands up to 30 miles from his home in Florida this January. The video was presented by the prosecution during Forte’s evidentiary hearing in May, as it challenges his claim of physical incapacity to stand trial. 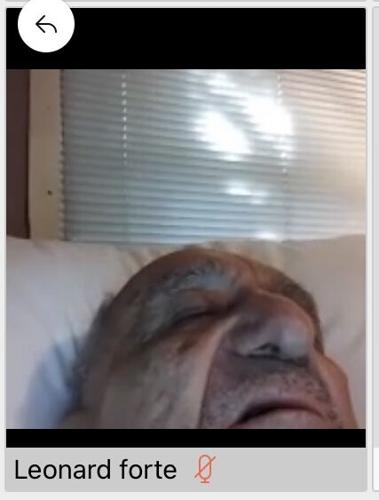 Leonard Forte, 79, is shown lying in bed at his home in LaBelle, Fla., when he appeared by video call for his evidentiary hearing at the Bennington Superior criminal court on March 31.

Defendant Leonard Forte, 79, is shown in a police surveillance video running errands up to 30 miles from his home in Florida this January. The video was presented by the prosecution during Forte’s evidentiary hearing in May, as it challenges his claim of physical incapacity to stand trial.

Leonard Forte, 79, is shown lying in bed at his home in LaBelle, Fla., when he appeared by video call for his evidentiary hearing at the Bennington Superior criminal court on March 31.

BENNINGTON — A man asking the court to dismiss his 30-year-old child sexual assault case because of his physical incapacity to stand trial is now requesting a mental competency evaluation.

Attorneys for Leonard Forte, 79, asked the court last week to order the Vermont Department of Mental Health to evaluate his mental competency. This came while Forte was in the midst of a three-part evidentiary hearing, where he presented evidence that he supposedly is too sick to be prosecuted on charges of repeatedly sexually assaulting a 12-year-old girl in Landgrove back in 1987.

Forte, a retired New York investigator during the alleged incident, was convicted at a Bennington County trial in 1988. But the presiding judge ordered a new trial, saying the female prosecutor had prejudiced the jury by being too emotional.

A second trial has not happened in the intervening decades. Since the 1990s, Forte has claimed that he is too sick to be retried so his three felony charges should be thrown out. He has since moved to LaBelle, Fla.

The Vermont Attorney General’s Office, which is prosecuting Forte, believes he is trying to evade justice. The lead prosecutor has repeatedly characterized his claims of physical incapacity as an “enterprise of deceit and lies.”

On May 26, Forte’s lead attorney asked the Bennington Superior Court to order an evaluation of his mental competency by a psychiatrist.

Defense attorney Susan McManus said Forte recently suffered a fall at home, which led to a multiday hospitalization, then a stay at a nursing and rehabilitation facility.

While recovering at the rehabilitation facility, his care providers “began to express concerns about his declining cognitive status,” McManus said in her two-page motion.

Because of these concerns, she said, an attending physician evaluated Forte’s capacity to make informed medical conditions. She quoted the physician as saying Forte “lacks the capacity of make informed health care decisions and does not have reasonable medical probability of recovering mental and/or physical capacity to exercise” his rights.

The lead prosecutor, Assistant Attorney General Linda Purdy, asked for additional information on the doctor’s finding in order to make an adequate response to the motion.

“We don’t have any other information besides this phantom determination of incapacity,” she told Superior Judge Cortland Corsones on Thursday, the last day of Forte’s six-day evidentiary hearing that began in March. “It’s a signed form. We need something from this physician, something more.”

Purdy said the 485 pages of records that the state received on Forte’s recent hospitalization and rehab facility stay contained contradictions about his health status.

McManus said prosecutors have been given all the related health documents that Forte’s attorneys have, including records that note his “cognitive decline.” Forte’s name appeared as an attendee on the court’s online hearing platform on Thursday, but his video remained off. He was reportedly absent at last month’s hearings due to the fall.

The court gave prosecutors until Wednesday to submit a response, if they choose to, on Forte’s request for a mental competency evaluation. Corsones said he would then make a ruling or, if needed, first hold a hearing on the matter.

After all the evidence in the physical incapacity issue was presented by 4 p.m. Thursday, the judge said he would issue a written decision as quickly as he could.

Two doctors who testified for the defense have said that making Forte travel from Florida to Vermont, as well as putting him on trial, would endanger his already poor health. A cardiologist and an internal medicine specialist said he has significantly reduced heart function, a large scar in his heart, a leaky valve and an abnormal heartbeat.

A cardiologist for the prosecution, on the other hand, has said that his review of Forte’s health records show the defendant is healthy enough to travel to Vermont and stand trial.

The doctor cited accounts of Forte’s travels within Florida and out of state in the past several years, as well as police surveillance video that captured Forte doing activities outside the house in January, when he claimed to be homebound.

The case victim, who is now in her mid-40s, attended one of last month’s hearings in person — the first time she’d been back in Bennington since Forte’s trial. She has said she is ready to take the stand again.

A lifetime of unanswered questions for Forte victim

Michele Dinko remembers that week in 1987 like it was yesterday.