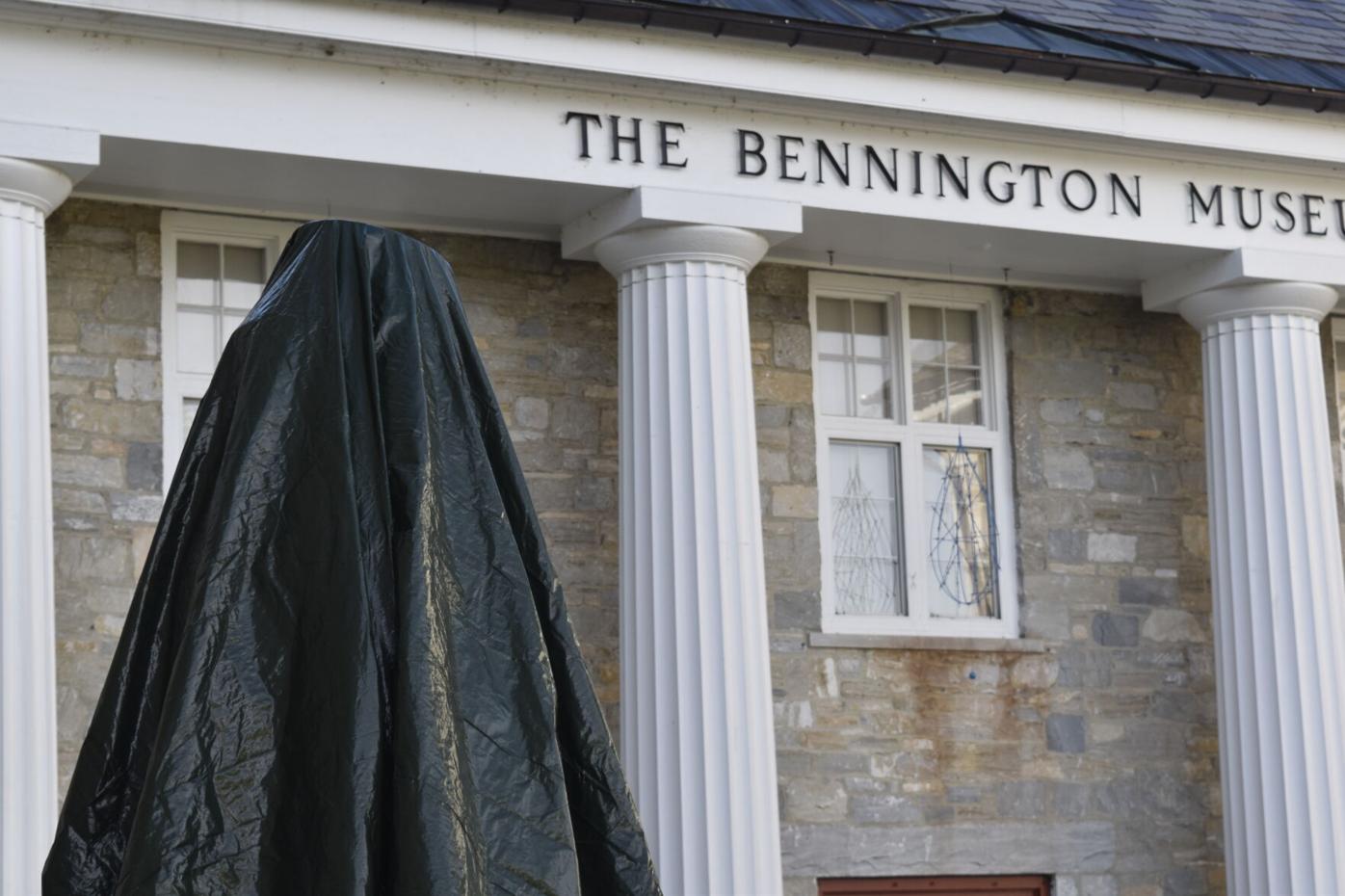 Lincoln Trilogy, which has welcomed visitors to the Bennington Museum since its installation in 1949, sits under a tarpaulin on Monday after it was defaced over the weekend with red paint. 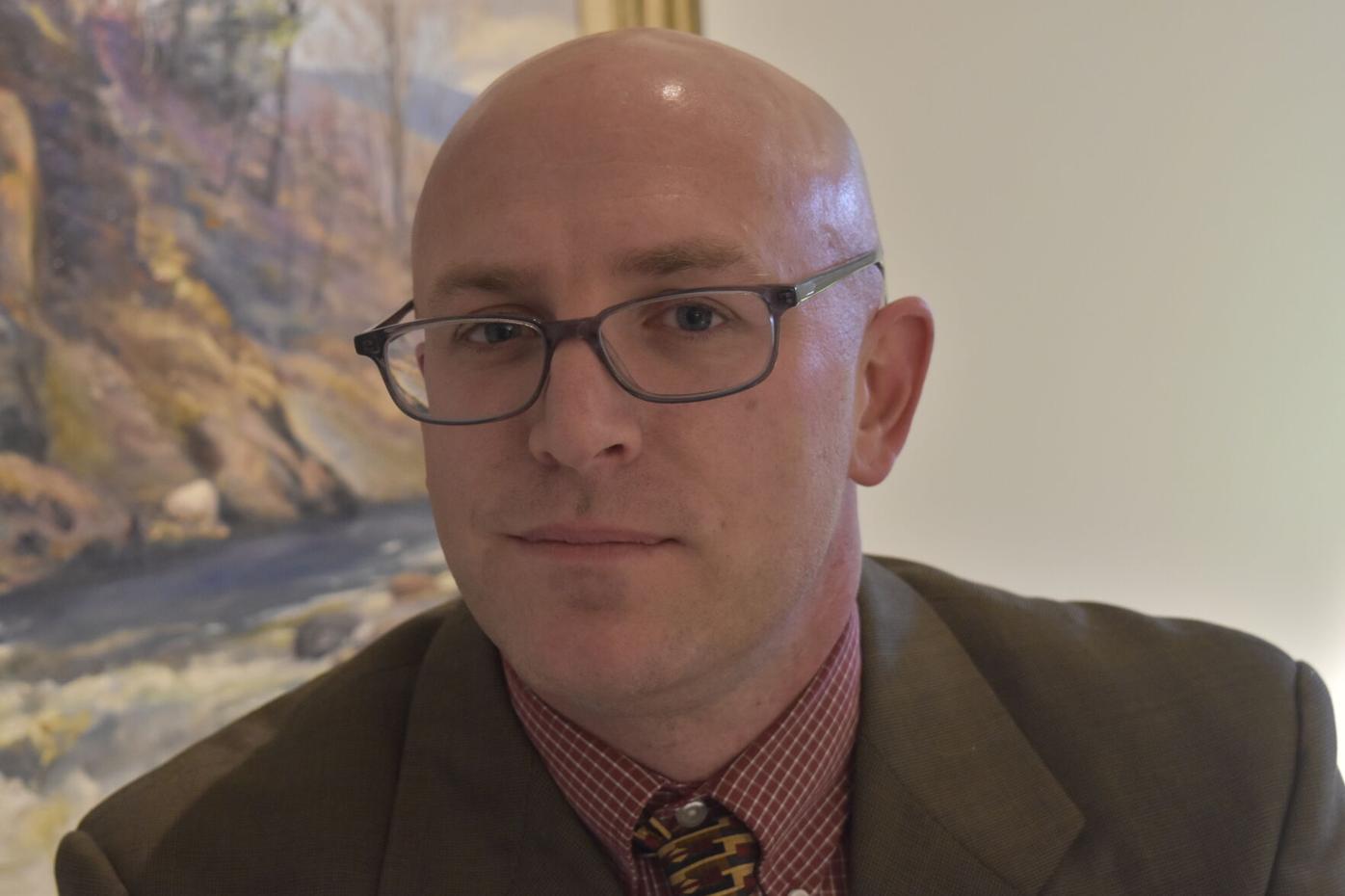 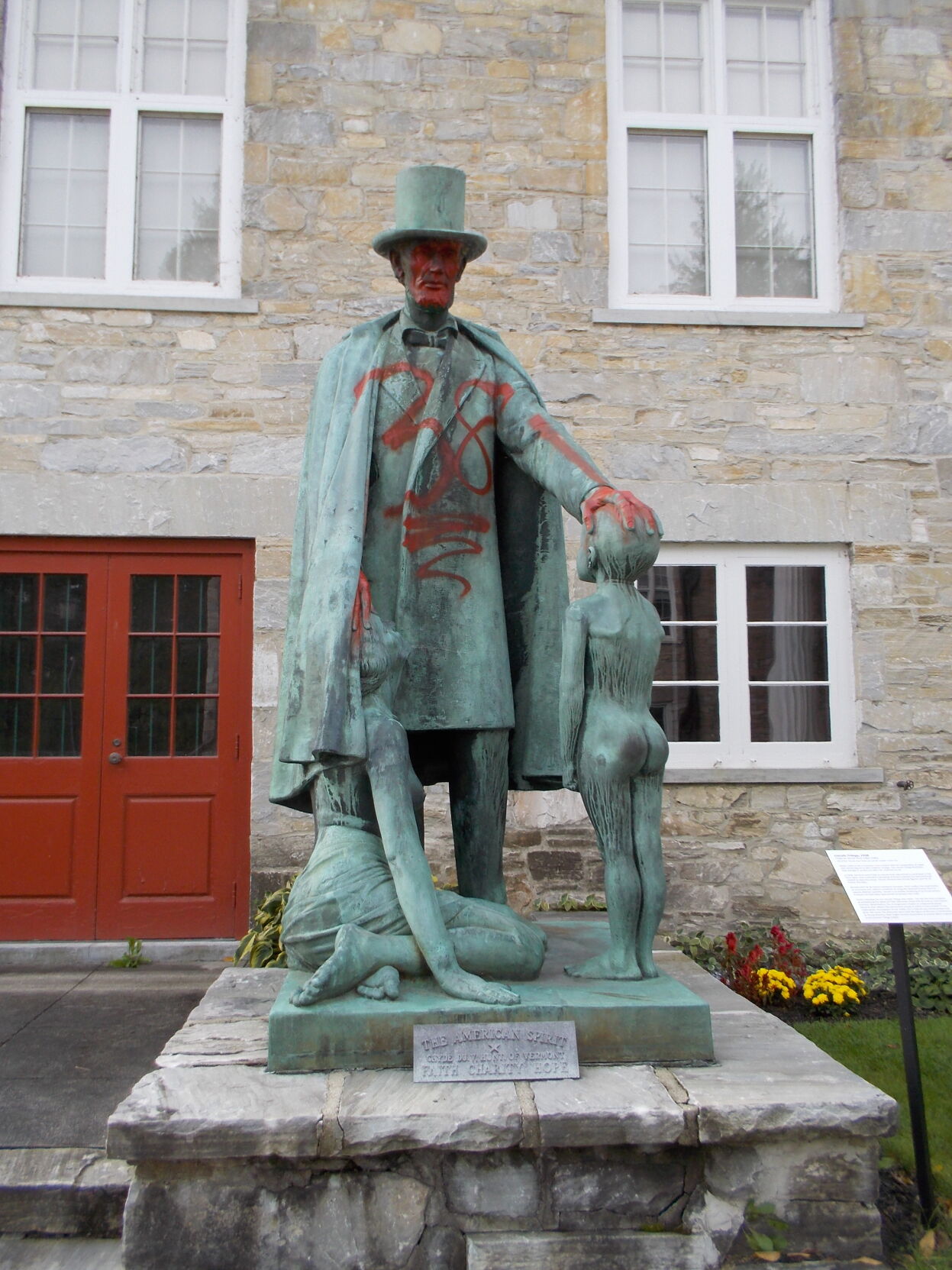 The Bennington Museum's Abraham Lincoln statue has been vandalized. The statue had reddish spray paint covering the statue’s face and hands. In the center of the statue’s chest was the number, “38.” It will cost several thousand dollars to repair the statue and remove the paint. 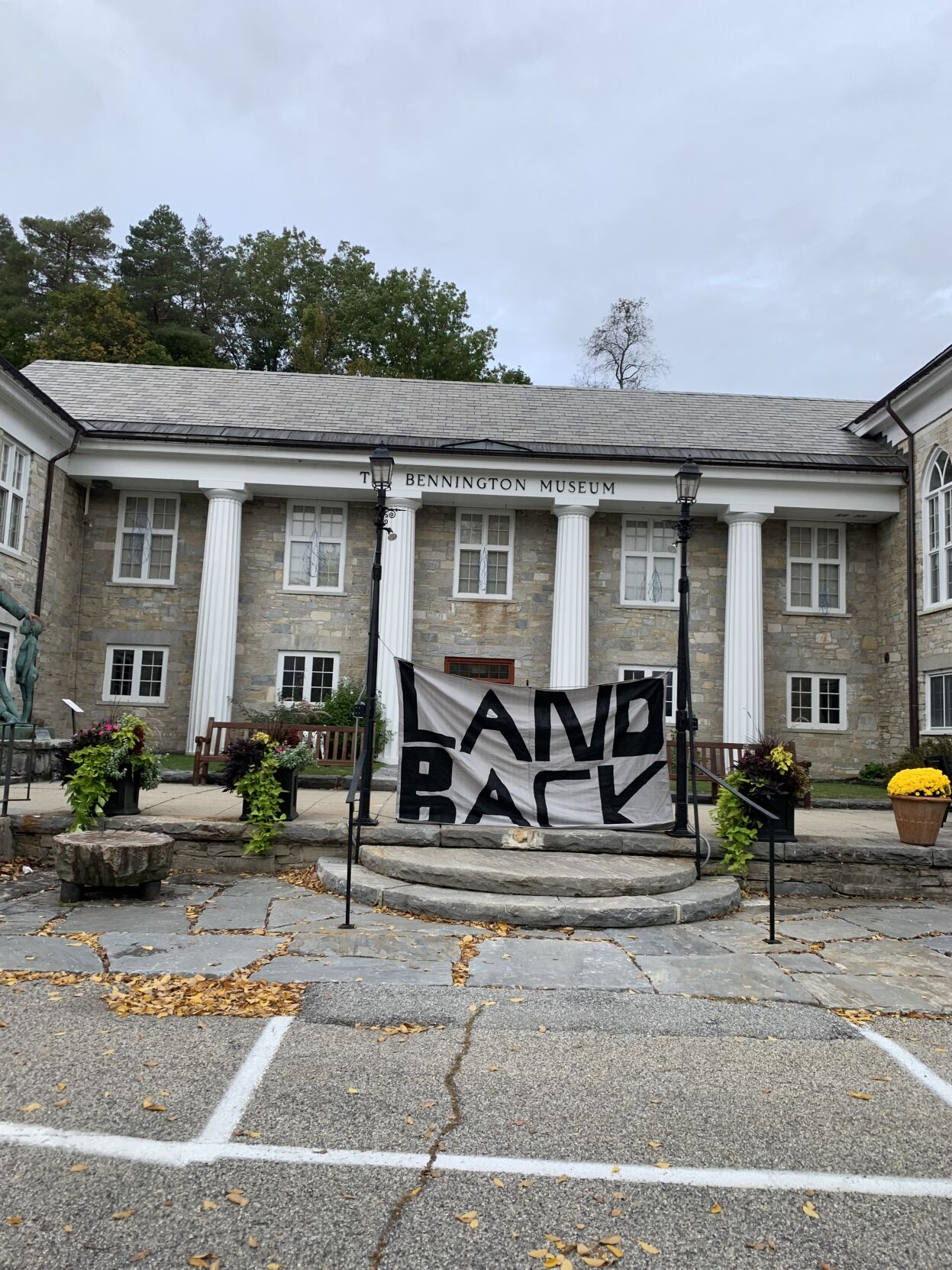 Lincoln Trilogy, which has welcomed visitors to the Bennington Museum since its installation in 1949, sits under a tarpaulin on Monday after it was defaced over the weekend with red paint.

The Bennington Museum's Abraham Lincoln statue has been vandalized. The statue had reddish spray paint covering the statue’s face and hands. In the center of the statue’s chest was the number, “38.” It will cost several thousand dollars to repair the statue and remove the paint.

BENNINGTON — The vandalism of a sculpture of President Abraham Lincoln at the Bennington Museum gained a possible connection to a decentralized “Indigenous Peoples Day of Rage,” as flyers addressing the vandalism, and calling for the sculpture’s removal, appeared on light fixtures on North Street in Bennington.

Police are looking for video security footage that might have captured the person or persons putting up the flyer Sunday night or Monday morning, Bennington Police Officer Amanda Knox said.

The flyer did not claim credit for the defacing of “Lincoln Trilogy” by Clyde du Vernet Hunt, which has been exhibited on the museum grounds since 1949.

The flyers were taken down on Monday.

“Abraham Lincoln was no ‘great emancipator,’” the flyer reads. “In addition to the fact that any depiction of him as a hero obscures his role in genocide, this statue is intensely inappropriate, as he looms over a kneeling woman symbolizing ‘faith’ and a child symbolizing ‘hope.’ This statue must come down.”

“We resist the celebration of this colonizer in our community today as party of a decentralized day of rage,” the flyer said. “Although none of the actors today are indigenous to this land, we see this call to action as urgent and all encompassing.”

Museum executive director Martin Mahoney said the vandalism, and a large banner attached to two light poles at the entrance to the museum’s courtyard that read “land back,” was discovered at 9:30 a.m. Sunday.

Mahoney said the dollar value of the damage, and whether the sculpture can be fully restored, won’t be known until conservationists from the Williamstown Art Conservation Center arrive Tuesday.

There was no advance warning that Lincoln Trilogy would be a target, Mahoney said.

“As a museum professional, we take it to heart that we want to preserve, protect and interpret every object that we have. And anytime something like this gets damaged, it’s time for a reevaluation of our own internal procedures and protocols,” Mahoney said.

“But I think it was unexpected, because we didn’t have any inkling of any members of the community that were concerned about this particular angle of the interpretation. No one had reached out to the museum,” Mahoney said. “And we are very aware of our community, and we want to make that outreach. And we want to make this institution a warm and welcoming place for everyone. “

Community members have reached out in support of the museum, Mahoney said.

Red paint was apparently sprayed on Lincoln’s face and hands, and the number “38” on his chest — referring to the 38 Dakota persons put to death in 1862, the largest mass execution in the nation’s history.

While the museum does not plan to take the statue down as demanded in the flyer, the events lead to “a deeper conversation of how the museum world has undergone a significant shift in the way that they interpret and collect and present objects over the last few decades,” Mahoney said.

“Traditionally, museums are a celebration of the people that are in power, for lack of a better word,” he said. That has historically reflected the intentions of wealthy benefactors whose gifts of art and money made museums possible.

“So recently we’ve seen museums really striving to tell the story of all people. And that’s what we’re doing with the Bennington Museum,” he said. “We’re committed to telling the stories of all the people in the community, and we plan to restore the statue and use it as a launching pad for all different types of interpretations of complex and nuanced stories.”

That means a more nuanced view of Lincoln, Mahoney said.

According to the Minnesota Historical Society, the Dakota 38 were among more than 300 Dakota men who had been sentenced to death by a military tribunal for alleged crimes in the Dakota War of 1862. Lincoln had intervened with a letter to Minnesota’s governor, instead providing the names of 39 men to be executed. (One was given a late reprieve.) The men were hung on Dec. 26, 1862, in Mankato, Minn.

“He’s not just the great emancipator. He’s not just the wartime president. He’s a complex person that made mistakes along the way,” Mahoney said of Lincoln. “This is a relatively well documented case where he was tremendously troubled with this case but for whatever reasons that are his own, this happened.”

The flyer indicates that the property damage was part of “Indigenous Peoples Day of Rage 2021,” on Sunday. Monday’s holiday, until recently celebrated as Columbus Day, has been renamed as Indigenous Peoples Day in Vermont and focuses on the harm done to the native people of North America by European colonizers, starting with Christopher Columbus’ arrival in 1492.

According to a website for Indigenous Peoples Day of Rage, organizers were calling for “autonomous, anti-colonial, anti-capitalist, and anti-fascist actions.”

“We envision this Day of Rage to be decentralized, filled with creative direct action ... daring, and with extraordinary diversity of tactics,” the site said.

What it could look like next is an arraignment before a judge: Bennington Police are seeking to charge the person or persons responsible with a felony, given that the damage to the sculpture might run into the thousands.

“As of now we don’t have anything that would lead to a certain group,” Knox said. “If anyone has video that would be very helpful.”

Chief Paul Doucette said he understands why Christopher Columbus remains a polarizing historical figure, and why the legacy of colonialism provokes anger on the weekend that once celebrated Columbus’ voyage to the New World.

“People are angry about it. People are expressing their frustrations. But creating acts of vandalism that costs a lot of money to fix isn’t the way to do it,” Doucette said.

Monday, a green tarpaulin covered Lincoln Trilogy, leaving only its interpretative sign, a few toes peeking out at the bottom, and a flat, round top — suggesting the crown of a stovepipe hat — to suggest its contents.

Lincoln Trilogy is actually three separate pieces: Nirvana, a kneeling female figure personifying the Buddhist concept of spiritual liberation; Fils de France, a boy symbolizing the rebirth of France following the horror and destruction of World War I; and Lincoln, who is clothed because he is a depiction of a historical figure rather than an abstract concept.