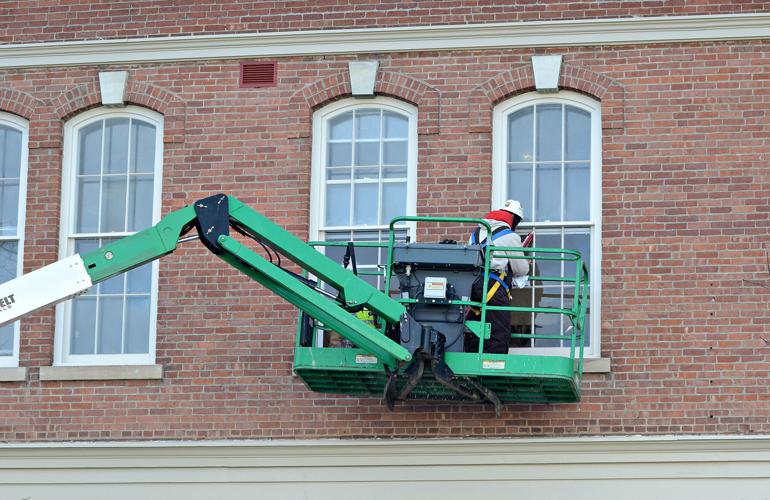 Work continues on the exterior of the Putnam Block. 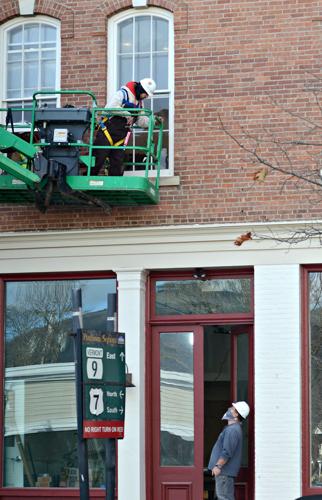 Construction workers talk as work continues on the Putnam Block in Bennington. 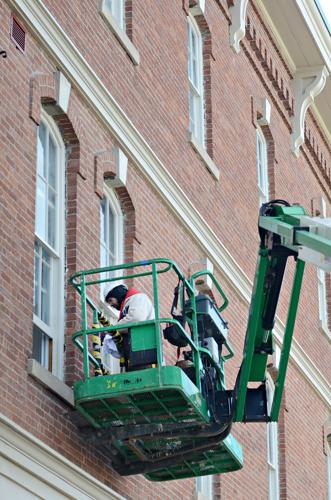 Work continues on the exterior of the Putnam Block in Bennington.

Work continues on the exterior of the Putnam Block.

Construction workers talk as work continues on the Putnam Block in Bennington.

Work continues on the exterior of the Putnam Block in Bennington.

BENNINGTON — Phase 2 of the Putnam Block project remains “on pause” because of the COVID-19 epidemic, but activity at the Four Corners resulting from the $55 million project’s first phase will be evident soon, local officials said this week.

With concerns about the massive downtown redevelopment effort being voiced by some, Bill Colvin, who has acted as project point-person, said occupancy of the 31 residential units created in two historic buildings under renovation will begin in about two weeks.

Despite a construction slowdown of approximately four months caused by the COVID-19 pandemic, the residential portions of the former Hotel Putnam and the Winslow Building adjacent to the west on Main Street are substantially complete, Colvin said.

When residents move in, he said, the presence of lights in the upper floors of the historic buildings at the intersection of Routes 7 and 9 should provide visible proof of progress.

The commercial spaces in the three historic Phase 1 buildings — also including the Courthouse building to the south of the hotel — remain under construction, he said, with completion of that work expected early in 2021.

“I think Phase 1 is really a success story,” Colvin said. “People will begin moving in in the next weeks, and the commercial [renovation] will be done in early ’21.”

Because of the epidemic, the project “lost about four months,” he said, adding that during that period “the investors put up a significant amount” to cover the additional ongoing expenses.

“They did this privately,” he said. “They did not come to the town.”

The project, involving four acres and six buildings south and west of the Four Corners, is an initiative of the Bennington Redevelopment Group, LLC, a consortium of local businesses, institutions and individuals formed to stimulate economic development in the town’s central core.

Funding for the $27.6-plus million Phase 1 work involved a complex financing package with at least 17 agencies, institutions or other sources of grant funding, historic preservation and other tax credits and private investment participating.

“I am gratified at the progress made in the Putnam project,” he said. “The residences are nearly ready for occupancy. The retail spaces are looking more and more finished. The town remains committed to its support of the project through its economic development loan, through the TIF (Tax Increment Financing District) when appropriate, and through grants and planned expenditures that enhance the downtown experience. Remember, any TIF expenditures require support from the voters.”

In addition to the Putnam project, the downtown also has seen work on a new distillery, brew pub venues, the old Bennington High School building and other sites, despite the epidemic, he said.

“There is no doubt COVID had an impact on all businesses and the business climate,” Hurd said. “Those who would blame these difficulties on the government here in Bennington are just uninformed or, worse yet, taking advantage of the difficulties to push their agenda. Those I talk to remain positive; yes, weary, but positive looking forward to defeating the pandemic and reopening Bennington. We are a resilient community. We are stronger together.”

Colvin and other officials also addressed Bennington’s TIF plan and whether delays for Phase 2 could place an additional burden on the town and taxpayers.

Taxpayers are not at risk, they said, because Bennington has yet to propose any infrastructure work or bonding to pay for such construction and have the repayment costs covered through the TIF program.

The state program allows communities to propose a TIF district within which infrastructure projects that benefit private redevelopment — such as with the Putnam Block work or renovation of other downtown structures — and to then designate a percentage of the additional property tax revenue generated by higher property values to pay off the bond.

Basically, if a property is assessed for taxes at $1 million, but after a privately financed redevelopment project it is assessed at $5 million, a percentage of the new property tax revenue raised can be earmarked to pay off the town’s related infrastructure bond.

The town’s 2017 application to the Vermont for approval of a TIF district proposed infrastructure projects totaling about $7 million to support a range of proposed redevelopment efforts for commercial or other buildings in the district. But no bond authorization for any of those projects has been sought by the town, Colvin said.

At any rate, he said, bonding under a TIF program requires a town meeting vote with the work involved specified. The $7 million figure, Colvin stressed, was the total amount of possible infrastructure work in the town’s TIF plan, originally involving some 17 possible projects at multiple sites.

“We don’t have to do that,” he said, adding that the town could seek a bond for only much smaller infrastructure projects.

The town’s application included maps and information on the potential public and private projects that officials believe are possible and could revitalize Bennington’s downtown.

Encompassed within the TIF district are about 70 acres and 155 parcels.

According to Megan Sullivan, executive director of the Vermont Economic Progress Council, which approves and monitors TIF districts, Bennington has a TIF district plan that was approved in 2017 and outlined 10 years of possible public improvements that will spur private development.

She added that, because of the epidemic, the Legislature has added an addition year in which a district can incur debt — in Bennington’s case, until 2028.

“As Bennington has not yet incurred any TIF debt there is no current risk to taxpayers,” she said in an email.

“As we have seen in all TIF Districts plans and timelines can change even in normal times,” Sullivan wrote. “Certainly the pandemic has had severe impacts across all sectors in Vermont not the least of which is development in our downtowns.”

When projects or plans change, she wrote, “before moving forward on any new plans, districts are required to come back to the [Select Board] and the state with a substantial change request.”

TIF districts also have a five-year period in which to incur debt under the TIF program, but they can request an extension of another five years.

Sullivan said the TIF program annual reports on all of Vermont’s districts can be found at on the program’s website.

Michael Keane, of North Bennington, a member of the statewide Vermont Economic Progress Council, said, “Bennington is relatively new to TIF. It takes any town a while to develop and present its TIF plan to voters. The plan then has to be vetted by the [council] before it can get underway. COVID-19 has thrown a monkey wrench into the plans of many municipalities across the state and the country.”

He added that residents should remember that “Bennington can do this only if its citizens have the will to help it succeed,” and that “Bennington is the only Vermont municipality that has the 1.5 million population of the Albany (N.Y.) Capital District as its ‘neighbor.’ That’s both a tremendous opportunity and a challenge for a town that wants to use a TIF to grow, improve and flourish.”

At the moment, Colvin said, since Phase 2 is on hold, it remains uncertain what might be needed in infrastructure work for that phase. Planning for Phase 2 buildings is likewise on hold, he said, but Colvin said he still expects Southwestern Vermont Health Care will be involved as the anchor investor — based on conversations with hospital officials.

The health care organization is a partner in BRG, LLC, which also includes the Bank of Bennington, Bennington College, Global Z International and individual investors.

SVHC had planned a multi-story building in Phase 2 with medical and other office space west of the Winslow Building, and another smaller building was proposed nearby, possibly with a grocery.

Creation of additional residential units, parking, walkways and open space also was to be part of Phase 2, which was the phase considered most likely to benefit from TIF-funded infrastructure work.

A Phase 3 also is part of the original Putnam Block plan. It called for construction, likely be undertaken by a housing developer such as Shires Housing, in cooperation with other organizations, of new housing along Washington Avenue. That would include affordable and other units.

If built out as proposed, the third phase could bring the total of new housing units within the overall project to more than 100, providing potential customers to boost downtown businesses, planners have said.