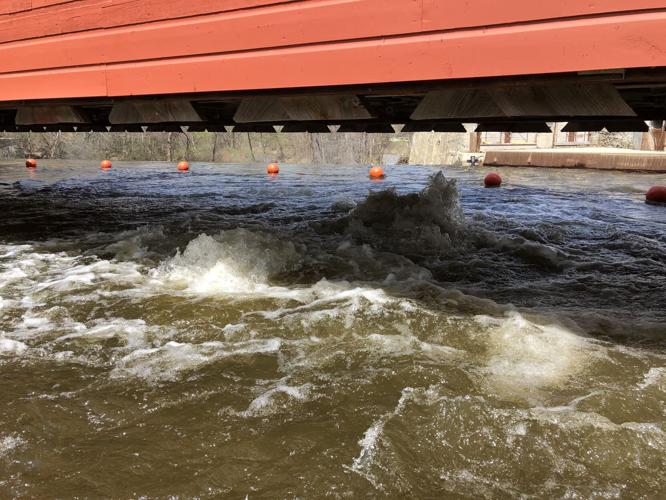 Water in the Walloomsac river churns in May 2018 near the Vermont Tissue Mill hydroelectric facility that had been restored and operated by the late Bill Scully. His hydro plant management company, Carbon Zero, LLC, is suing contractors involved in the high air-pressure drilling operation, which the suit contends led to an extended shutdown of the hydro plant and damage to the equipment. 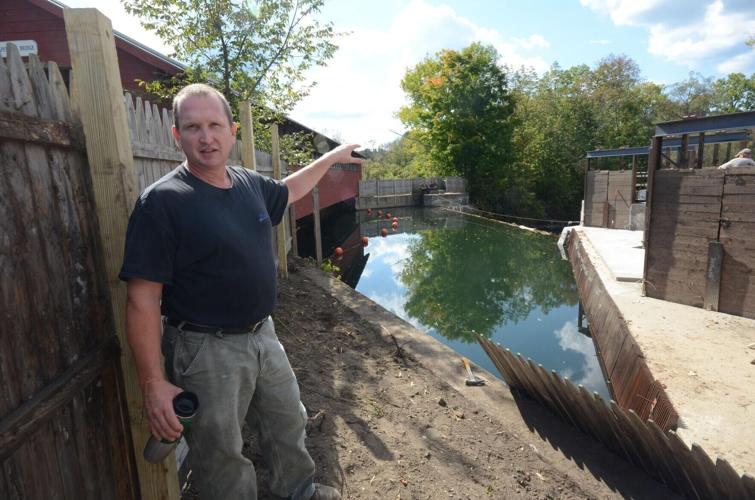 Bill Scully gives a tour of his restored hydroelectric plant at the Vermont Tissue Mill factory dam in North Bennington. He brought the hydro plant back online in 2015, but it was shut down after a river bed drilling accident near the dam in 2018. Scully died of cancer in 2020, but his hydro firm, Carbon Zero, LLC, is suing three contractors over damage to the facility allegedly caused by the accident.

Water in the Walloomsac river churns in May 2018 near the Vermont Tissue Mill hydroelectric facility that had been restored and operated by the late Bill Scully. His hydro plant management company, Carbon Zero, LLC, is suing contractors involved in the high air-pressure drilling operation, which the suit contends led to an extended shutdown of the hydro plant and damage to the equipment.

Bill Scully gives a tour of his restored hydroelectric plant at the Vermont Tissue Mill factory dam in North Bennington. He brought the hydro plant back online in 2015, but it was shut down after a river bed drilling accident near the dam in 2018. Scully died of cancer in 2020, but his hydro firm, Carbon Zero, LLC, is suing three contractors over damage to the facility allegedly caused by the accident.

BENNINGTON — Defendants in a suit filed by the late Bill Scully’s hydroelectric company Carbon Zero are asking the court to strike a section of the action seeking punitive damages.

Three companies are named in the suit in Bennington Superior Court Civil Division over damage allegedly caused by a river bed drilling accident in 2018.

The firms involved are MSK Engineering and Design Inc., W.M. Schultz Construction Inc., of Ballston Spa, N.Y., and PDD Contracting, LLC., of East Greenbush, N.Y. They were then working on a project to extend Bennington water system lines to hundreds of properties with wells contaminated by PFOA (perfluorooctanoic acid).

The industrial chemical was discovered in private wells in 2016 and had spread from the exhaust stacks of two former ChemFab Corp. plants in town, state officials determined.

The horizontal riverbed drilling in May 2018 was undertaken to extend a water line from North Bennington Road (Route 67A) under the Walloomsac river to connect to another line on Murphy Road.

The hydro plant’s turbine, which Scully had shut down as a precaution prior to the drilling, was never restarted amid disagreements over the threat silt posed to the equipment and over financial responsibility for impacts of the accident.

Scully, who died of cancer in 2020, had called for the silt to be cleared from inside his facility and for addressing any damage resulting from the plant standing idle, especially during freezing winter conditions.

At one point, Scully estimated the cost of restarting the facility to be in the range of $1.2 million, based on consultation with manufacturers of the turbine and other equipment.

“This is a case about what happens when engineering and construction companies engage in negligent conduct that causes severe harm to an adjacent landowner, forces that landowner’s business to shut down, and then stand idly by as the business fails, property is destroyed, and lives are ruined,” states the suit complaint, which was filed in the spring on behalf of Scully’s management entity, Carbon Zero LLC, by Ian Carleton and Peter Raymond, of Sheehey Furlong & Behm, of Burlington.

The complaint adds, “Despite Carbon Zero’s repeated pleas for defendants to repair the damage to its hydropower facility so it could resume operations and avoid additional damage from a prolonged shutdown, defendants did nothing. Instead, they sat back and watched as their refusal to fix the damage they caused continued to prevent Carbon Zero’s facility from resuming operations, causing Carbon Zero’s equipment to further degrade over time and exhausting its remaining finances.”

With the passage of time and freezing temperatures during winters, “the facility was eventually ruined,” the suit states. “The facility never operated again. This lawsuit seeks justice — in the form of both compensatory and punitive damages — for the egregious harm that MSK, Schultz, and PDD callously inflicted on Carbon Zero.”

Carbon Zero LLC this year concluded an agreement to sell the hydro plant to North Bennington Hydroelectric LLC based in Plainfield. That sale is awaiting receipt of necessary federal licensing for the new ownership group, which plans to restore and reactivate the 360-kilowatt capacity plant, which Scully brought online in 2015.

The defendants, who have denied the accuracy of the suit’s damages claims, also filed motions over the summer seeking to have the court strike a Carbon Zero claim for punitive damages.

The response from attorneys jointly representing the defendants says the court should strike the claim for punitive damages “because it lacks any basis in law or fact. Specifically, the complaint fails to allege any wrongful conduct by defendants that could plausibly be characterized as outrageously reprehensible much less satisfy the strict standard of malice required by the Vermont Supreme Court.”

The motion adds, “Although the precise grounds for Carbon Zero’s punitive damages claim are unclear, Carbon Zero appears to allege that defendants’ refusal to remediate, or pay Carbon Zero for, the claimed losses amounted to malicious and outrageously reprehensible conduct.”

Referring to case law, the motion states further that “although defendants firmly deny Carbon Zero’s sensational allegations, even if true none is sufficient to satisfy the high standard of proof required for an award of punitive damages.”

The defendants are represented by Andrew MacIlwaine, of DINSE, of Burlington, James M. Cooley, of Heilmann, Ekman, Cooley & Gagnon Inc., also of Burlington, and F. Brian “Ted” Joslin, of Theriault & Joslin, of Montpelier.

The motion by the defendant firms states further that, “In addition to the alleged property damage and associated losses, Carbon Zero also appears to allege that defendants are liable for punitive damages because of their failure to accept responsibility and compensate Carbon Zero for alleged losses that were in dispute.”

It adds, “Carbon Zero implies that defendants did nothing to investigate its claim despite acknowledging in its complaint that ‘for the next two and a half years’ the parties had ‘innumerable calls, emails, settlement discussions, and a day long mediation.’”

The defense attorneys also state that, “The parties had even agreed to an additional round of mediation to be convened in early 2020, but it was postponed because ‘[a]round the time of the second scheduled mediation’” Scully was diagnosed with an aggressive form of cancer and died on July 19, 2020.

In a response to the defendants’ motion to strike the punitive damages claims, the plaintiff’s attorneys contend it “should be denied for numerous reasons. First, a mountain of case law from all over the country, none of which is cited by defendants, demonstrates that courts are nearly unanimous in holding Rule 12 motions to dismiss or strike punitive damages claims, exactly like this one, are inappropriate prior to discovery being conducted.”

In a subsequent written argument, the defendants contend that, “The Vermont Supreme Court has made clear that punitive damages are limited to cases where the alleged wrongdoing is not only outrageously reprehensible but also performed with malice. Carbon Zero’s allegations, even if true, simply fail to state a legally cognizable claim for punitive damages under Vermont law.”

But the plaintiff, in a further response, contends that caselaw cited by the defendants does not provide a like example given the facts in this suit.

“It certainly should not be read to overcome the wealth of on-point caselaw cited by plaintiff,” Carleton stated.

Bennington Town Manager Stuart Hurd said Monday that the town has not been a party to the suit, adding, “We have encouraged all parties to work together since the original allegation. The water line was [later] installed below the dam and is completed.”

None of the attorneys involved in the suit could be reached this week for comment.