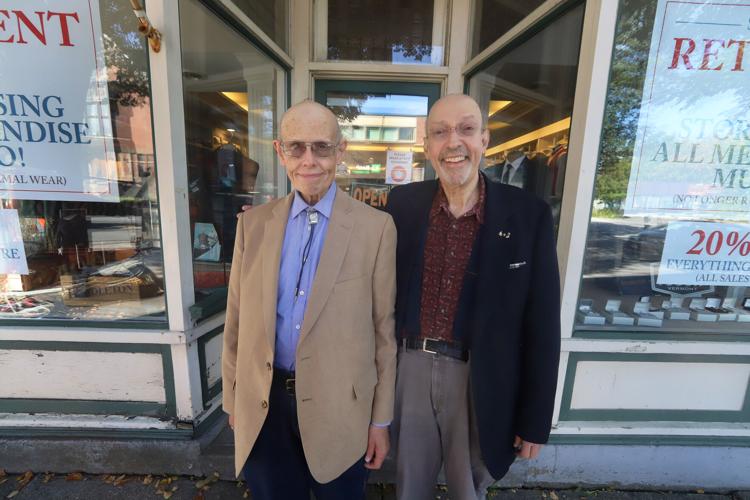 Samuel Shaffe, left, and David Shaffe, in front of Shaffe's Men's Shop on Main Street in Bennington. The shop is closing for good soon, but is hosting a final sale until all clothing is gone. 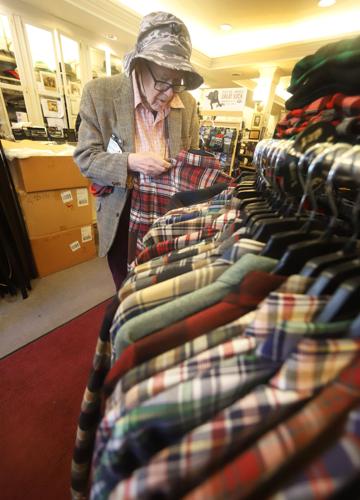 A shopper browses the wool shirts at Shaffe's Men's Shop in Bennington during its final closing sale. 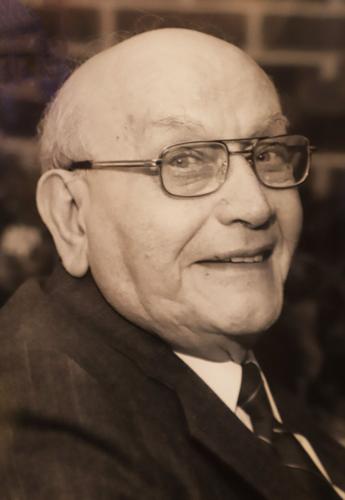 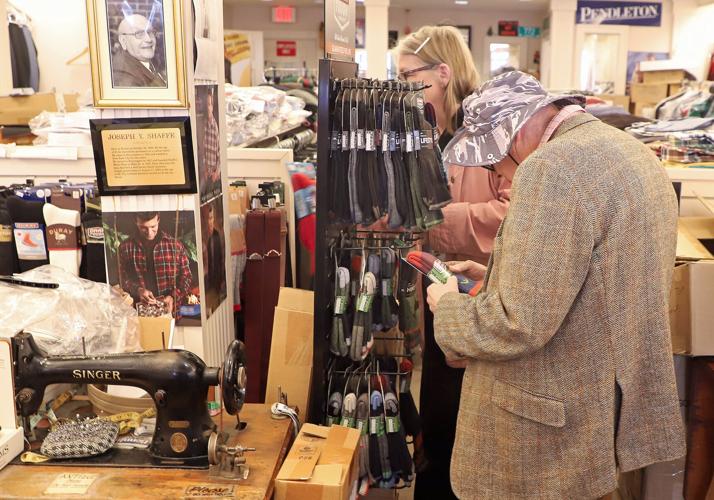 Shoppers browse during the final sale at Shaffe's Men's Shop. The original sewing machine used by Joseph Shaffe is still sitting where he last used it, before he passed away in 1994. 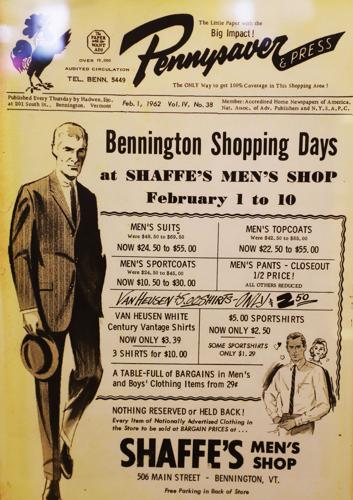 An old Pennysaver advertisement for Shaffe's Men's Shop in Bennington, hanging on the wall in the store.

Samuel Shaffe, left, and David Shaffe, in front of Shaffe's Men's Shop on Main Street in Bennington. The shop is closing for good soon, but is hosting a final sale until all clothing is gone.

A shopper browses the wool shirts at Shaffe's Men's Shop in Bennington during its final closing sale.

Shoppers browse during the final sale at Shaffe's Men's Shop. The original sewing machine used by Joseph Shaffe is still sitting where he last used it, before he passed away in 1994.

An old Pennysaver advertisement for Shaffe's Men's Shop in Bennington, hanging on the wall in the store.

But for a limited time, you can still shop, soak in the history of a bygone era and score a discounted price to boot.

Shaffe’s Men’s Shop on Main Street, a community staple started by a Ukrainian tailor who moved here back in the fall of 1932, is closing after holding a retirement sale starting this week. In the coming weeks, the shop will clear its shelves of high-quality men’s wear items, such as Woolrich shirts, hand-tailored suits and Vermont’s own Darn Tough socks at deeply discounted prices.

“Yeah, it’s a shame to see a place like this go, but you know, life moves on,” says David Shaffe, owner of the business and the tailor’s son. “I am going to miss the people that came into the store over the years. It was a place where you could just come in and chat a little bit. I had a lot of people that would come in and talk politics with me. Just that interaction with people — that’s what I’ll miss most.”

The origin of Shaffe’s is steeped in the rich history of the immigrant experience. It was started by a young man from Ukraine who arrived in America with just a few rubles left in his pockets and a dream of making it in America.

“My father, Joseph Yanishefsky, sailed to New York in 1927, because his father was already here working in Manhattan’s garment district,” Shaffe says. “He came as part of a government work program that said if you got to America before the age of 21, you would be considered a citizen.”

Young Joseph was a tailor professionally trained in the old country. He arrived during the tenuous time of garment trade unions forming in the city. After working a week or so in Manhattan, Joseph witnessed violence first-hand, and came home and told his father about the beatings on both sides. His father said, “Well, you haven’t been in this country long enough to decide whether you’re for or against trade unions, so you better quit and get a job elsewhere.” According to Shaffe, his father went into the place where he was employed and gave them the notice to say he was quitting. The boss said, “You’re not only green, you’re yellow, too.” So, he left.

“Shortly afterward, Joseph saw an ad for someone looking for a custom tailor in Bennington, Vermont, of all places,” Shaffe says. “He had no idea what it was or where it was, but he put his remaining money on the counter in Grand Central Terminal and asked for a ticket. They sent him up here, and he never went back.”

Joseph first worked for an established business when he came here in 1927, eventually striking out on his own in 1932 when the Depression hit hard, and he didn’t want to be a drain on the business where he was working.

“When he went into business for himself, he found people couldn’t pronounce the name,” Shaffe says. “They were having trouble writing the name out, so he decided he would change the name legally. He figured he didn’t want to take the first part or the last, so he settled on the Shaf middle part, eventually expanding it to Shaffe. And that’s how he got the name.”

Joseph started the business as a tailor shop, but after a while, found that it was hard to make a living just doing alterations.

“He was trying to make things to order, which he was very good at,” Shaffe says. “But he couldn’t make enough of it to really make a living. That’s when he decided he’d go into men’s readywear, and start selling clothing off the rack, doing his own alterations for many, many years, right up until he was in his 80s, until he couldn’t work no more.”

The location has moved over the years, twice, but always has been downtown. The original store was called Joe’s Tailor Shop. In 1953, Joseph changed the name to Shaffe’s Men’s Shop. It has been in the current location since 1962.

David Shaffe bought the business from his dad in 1976.

“When I got back from college, I decided I would stay here in Bennington,” Shaffe says. “My brother and I worked in the store since we were kids, so it came naturally to me. I got involved in politics, too. I was in the Legislature for 12 years, from 1973 to the end of 1984, but always came back here.”

His brother, Samuel, joined a few years later to work in the store. Both brothers have been running the shop ever since, and both have watched as retail changed, slowly, from Main Street businesses to malls to today’s online shopping.

“I think, for us, the biggest change in retail landscape was the proliferation in the ’70s, with shopping centers around the area. We used to have many clothing stores, both women’s and men’s when I was a kid. At its height, downtown was the main shopping district where people spent their money and bought the items they needed for their everyday lives,” he says. “That changed when you started seeing shopping centers, where people could go to other places to shop. ... Over the years, it got harder and harder to make a living with so many people sitting home and ordering things online. Very few stores like this are left, especially in smaller communities.”

Shaffe is nostalgic for those simpler times in Bennington, when shoppers were plentiful, and he and his brother worked hand-in-hand with their dad in the family business.

“Downtown was always the heart of activity. I mean, you used to come down on Friday nights. The stores were all open. You would see lots of people downtown. It’s where you went to meet and greet neighbors. People enjoyed coming downtown, taking a walk in the summertime. You know, there was a lot of that,” Shaffe recalls. “And over the years, of course, that kind of drifted away, as people started finding other outlets to entertain their time, both with entertainment and with shopping opportunities. So, you know, over the years, there have been many changes to that landscape.”

Shaffe’s Men’s Shop will stay open until all the inventory sells. Visitors can even examine the original sewing machine Joseph Shaffe used, still sitting exactly where his father left it before he passed away.

“We’re not going to rush out in a week or two. We are going to do it in a responsible way,” Shaffe says. “We’re starting with 20 percent off everything in the store until that slows down. Then, we’ll increase the discount to 30 percent, 40 percent and so on, until it’s finished.”

With a tiny hint of melancholy and nostalgia, Shaffe says he has happy memories of deciding to be with his father after college,instead of going to work somewhere else.

“It’s just fun memories of being a part of Bennington. It’s a beautiful community. The people are nice. It’s a good place to live, a good place to have children and family. Those memories will be something I’ll always keep with me,” he says.

The store will be open Monday through Saturday, except for Wednesdays, from 10 a.m. to about 4:30 p.m., and might expand those hours if needed.