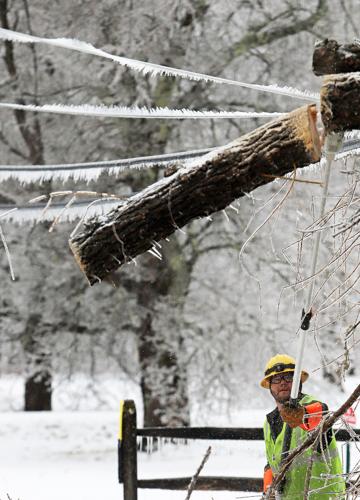 Green Mountain Power line worker Andrew Hughes helps restore power, after thousands of homes and businesses were left in the dark by an ice and snowstorm. 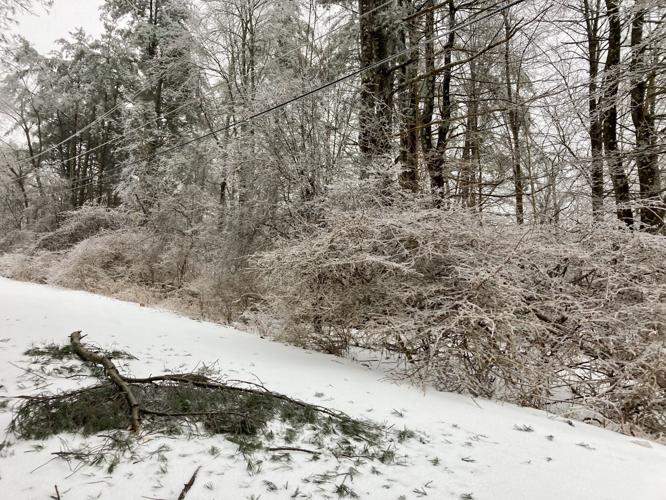 Green Mountain Power line worker Andrew Hughes helps restore power, after thousands of homes and businesses were left in the dark by an ice and snowstorm.

BENNINGTON — Schools closed throughout Vermont on Friday, state offices opened two hours late, downed lines knocked out power to thousands of homes and businesses, and cars and pedestrians faced ice-covered roads and sidewalks as a mix of snow, sleet and icy rain settled over the region.

“It’s tricky going, but we’re hanging in,” said Bennington Town Manager Stu Hurd. He said the town road crews were out salting — this was primarily an ice and sleet event early on — starting around 4 a.m. He said in the morning hours that roads and sidewalks remained icy. “We’re staying ahead of it, but we recommend that people not go out unless they have to, because it’s very slushy, very slippery.”

Hurd said the sleet was expected to turn to snow, and the plows would stay out throughout the storm, adding, “It is really messy.”

“We have lines down all over town, and the road conditions are still treacherous,” said Town Administrator Nick Zaiac. “We do understand this will be a couple of days to get back to normal after the storm is over.”

A winter storm warning remained in effect through 8 p.m. Friday, according to the National Weather Service, with heavy mixed precipitation falling and additional sleet and snow expected to add up to 4 inches to the overnight snowfall tally.

Some schools, including the Bennington-Rutland Supervisory Union and Burr and Burton Academy, closed early Thursday in advance of a messy winter storm.

“Travel will be very difficult to impossible on untreated surfaces,” the NWS advised late Thursday.

Many schools declared a snow-day on Friday, with closures reported around the state, including Bennington County.

In all, 27 towns in Green Mountain Power’s service area in Vermont were experiencing power outages as of 6:45 a.m.

Power crews were out in the region throughout the day.

“We got called out around 11 o’clock last night, and worked straight through,” said Andrew Hughes, a Green Mountain Power worker. “We’re gonna finish this up here and move on to the next one. Maybe get a few hours sleep late tonight before hitting it again tomorrow morning. We’ve been on several of these calls so far, mostly old trees iced over, falling onto the lines. There’s a lot of damage out there, but we’ll get them fixed soon. We’re hoping to get most people back online by Sunday morning the latest.”

”Just as forecasters predicted, the southernmost counties have been the hardest-hit,” she said. “That’s where we are seeing ice and heavy wet snow, and both those things are heavy and take down trees and power lines.” Green Mountain Power brought in external crews and had them positioned Thursday to respond to expected outages, Kelly said. “So far it appears this storm has played out as predicted, and our crews were right on it.”

The Manchester Fire Department was busy all Thursday night and Friday morning dealing with, among other things, a utility line down across Prospect Street just before midnight, and four separate calls involving downed lines between 12:30 and 2 a.m.

Fire Chief Chris Towslee and Town Manager John O’Keefe said the main roads were open by late morning, but some remote side roads were still in tough shape.

“There are still some roads that are impassable,” Towslee said late Friday morning. “There are some desolate areas, some back roads — because of all the ice in the trees, the trees are hanging down, making it very difficult to get anywhere. It’s nasty out there.” Towslee said.

“People should use caution on a day like this and stay home.”

Town Hall was open for business through 4:30 p.m., according to O’Keefe, as Friday was a property tax payment deadline.

“Anyone who tried to start their car outside knows there was a thick layer of ice covered by snow,” O’Keefe said. “It’s not the storm of the century, but it’s a tricky one.”