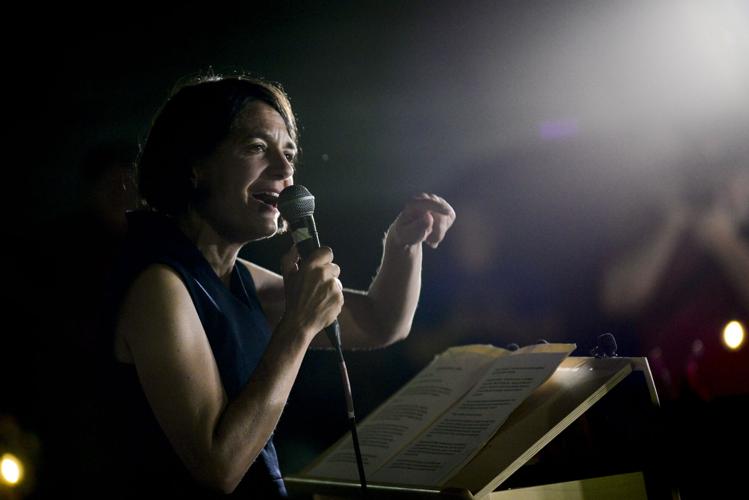 "I am a scrappy little broad," Senate President Pro Tem Becca Balint told supporters in Brattleboro Tuesday after winning the Democratic nomination to the U.S. House of Representatives. "I will carry your hopes and your fears and your wishes with me." 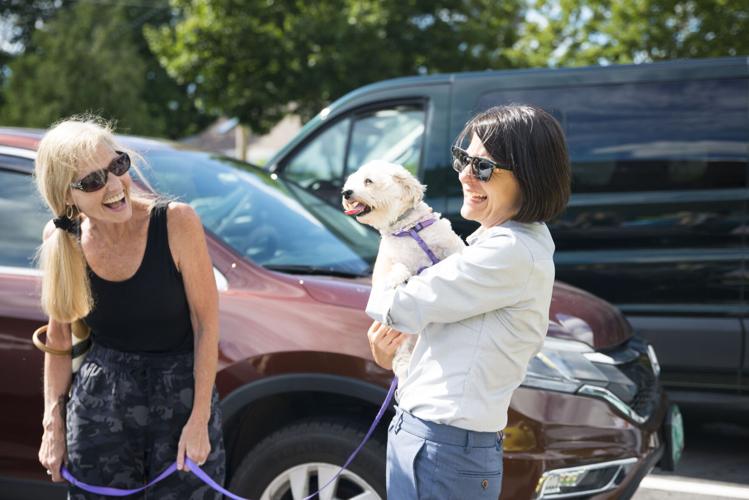 Becca Balint visited the polling place in Bennington during election day on Tuesday, taking time to say hello to Daisy. 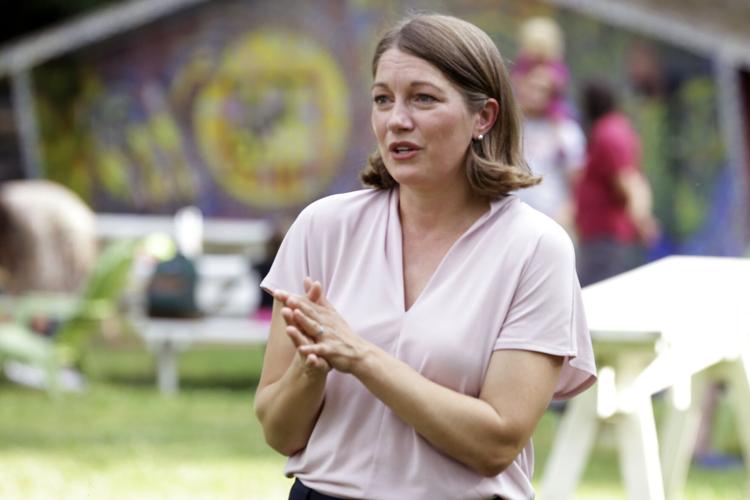 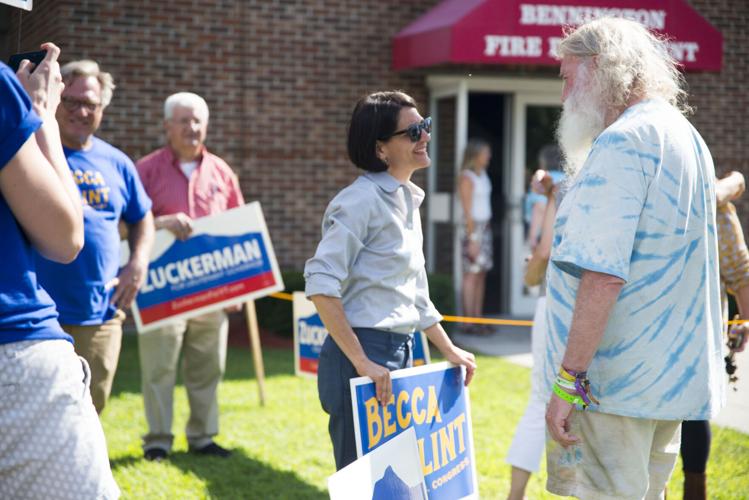 "I am a scrappy little broad," Senate President Pro Tem Becca Balint told supporters in Brattleboro Tuesday after winning the Democratic nomination to the U.S. House of Representatives. "I will carry your hopes and your fears and your wishes with me."

Becca Balint visited the polling place in Bennington during election day on Tuesday, taking time to say hello to Daisy.

BRATTLEBORO — Becca Balint has won the Democratic nomination for the U.S. House of Representatives.

Balint arrived in Brattleboro for a celebration Tuesday evening after spending the day on the campaign trail.

"Look at what we've done tonight, look at what we've done for the first time," Balint said during a victory speech at Harmony Lot in front of a large crowd of supporters. "For the first time in the history of Vermont, it looks like a woman and a member of the LGBTQ community is probably going to go to Congress. It's finally our time, it's finally our time.

"I've had people at every step on this campaign say, 'Are you sure you're up for this? Are you sure you can do this? You know, Congress isn't like the legislature.'

"I am a scrappy, little broad," Balint said. "And yes, I can do this. And I will carry your hopes and your fears and your wishes with me. I will stay rooted in our communities. And I will fight and fight and fight for the most vulnerable among us. And I will be able to do it because I know you're gonna be right there with me. We have to do this for climate justice, for universal health care for livable wages, for reproductive rights, for the safety of our queer and trans people in our communities. For racial equity, for common sense gun laws, for a nation as good as its promise."

Her chief competition in the race, Gray, called to concede at 8:40 p.m.

“I can say that while my disappointment is profound, so too is my gratitude for this opportunity. This was a tough race with deeply qualified candidates making their case to Vermonters,” Gray said. “If someone had told me years ago that running for Congress was something that a farm kid from Newbury could do, I wouldn’t have believed it. I look forward to continuing to serve Vermonters throughout the remainder of my term as Lt. Governor and I remain deeply thankful for the opportunity to serve this state I love so much.”

Balint won by a large margin in her hometown of Brattleboro, also winning Bennington and Manchester.

Balint will face Liam Madden of Bellows Falls, who won the Republican nomination for U.S. House, in the November general election.

Earlier, as Vermonters went to the polls, the candidates made a final in-person push for votes and hoped for the best.

In Bennington, that meant Balint got to spend some quality time Tuesday with voters outside the Bennington Fire Station — and share a moment with a little white dog, a Havanese, named Daisy.

“Are you Becca?” Daisy’s owner, Lisa Higgins, asked as she approached the candidate in the parking lot. They talked, with Higgins, a supporter, thanking Balint for her service and for visiting Bennington.

“I love everything that she stands for,” Higgins said of Balint, citing human rights, women’s rights and universal health care. “She’s everything I’m looking for in a candidate.”

Gray spent the day in Chittenden County, with stops in Burlington, Colchester, Essex Junction, Williston, Shelburne and South Burlington planned. Balint had started in Burlington and worked her way south to Bennington before heading home to Brattleboro, where she planned to await the primary results.

While a number of polls showed Balint with a comfortable lead, another suggested Gray was in the lead. But Gray, in a phone interview, said the only poll that mattered was the one that would be counted by town and city clerks Tuesday night.

“The most important poll is the poll that happens on Election Day,” Gray said. “I have been so encouraged and inspired by turnout across the state and I know that Vermonters will make the best decision.”

As did Gray, Balint said her campaign worked as hard as it possibly could. “I have no regrets. ... as they say in sports, we’re leaving everything on the field and we’re feeling the momentum for sure. But in politics you don’t take anything for granted. It’s nice to have polls that show us up, but we have to fight for every vote.”

What did the candidates learn about their state in the process?

Gray said she fell in love with Vermont all over again, as she has as lieutenant governor, and that they want someone “who’s going to work across the aisle and who’s going to lead with civility.”

“Vermonters are so exhausted from COVID, from economic upheaval, from anger and vitriol,” Balint said. “Someone in every community told me they ‘want to get back to a time when I can talk to my neighbors again.’”

Republicans faced a choice between Ericka Redic of Burlington, Anya Tynio of Charleston and Liam Madden of Rockingham to succeed Welch. As of this morning, Madden was leading in that race with 35 percent of the vote; Redic had 27 percent; and Tynio won 22 percent, according to the Vermont Secretary of State's unofficial results.

While Gray’s and Balint’s positions were closely aligned on many issues, including reproductive rights and climate change, Gray positioned herself as “pragmatic” in the same mold as Leahy and Welch. Balint, who had touted her ability to bring state senators together, gained progressive supporters when state Sen. Kesha Ram Hinsdale dropped out of the race and endorsed her.

Indeed, the race at times seemed a proxy fight between the state’s establishment and progressive Democratic factions, with Gray and Balint as the respective standard-bearers. Leahy voted for and donated money to Gray, while U.S. Sen. Bernie Sanders endorsed Balint and appeared with her late in the campaign.

Former U.S. Attorney Christina Nolan, was seeking the Republican nomination for Leahy’s Senate seat. Polls suggested the race between her and retired military officer Gerald Malloy were close, but that many GOP voters remained undecided. As of this morning, Malloy held an edge, with 40 percent to Nolan's 35.5 percent.

The Vermont primary also choose the nominees for governor.

Elected to his first two-year term as governor in 2016, Scott has focused his time in office on making Vermont more affordable and working to attract more people to the state to counter a demographic trend of an aging population with a shrinking workforce and fewer school-age children.

He is facing two little-known candidates in the primary.

The lone candidate for the Democratic nomination is activist Brenda Siegel, of Newfane. Last fall she spent 27 nights sleeping on the steps of the Vermont Statehouse to highlight the state’s homelessness challenge.

The Associated Press contributed to this report.