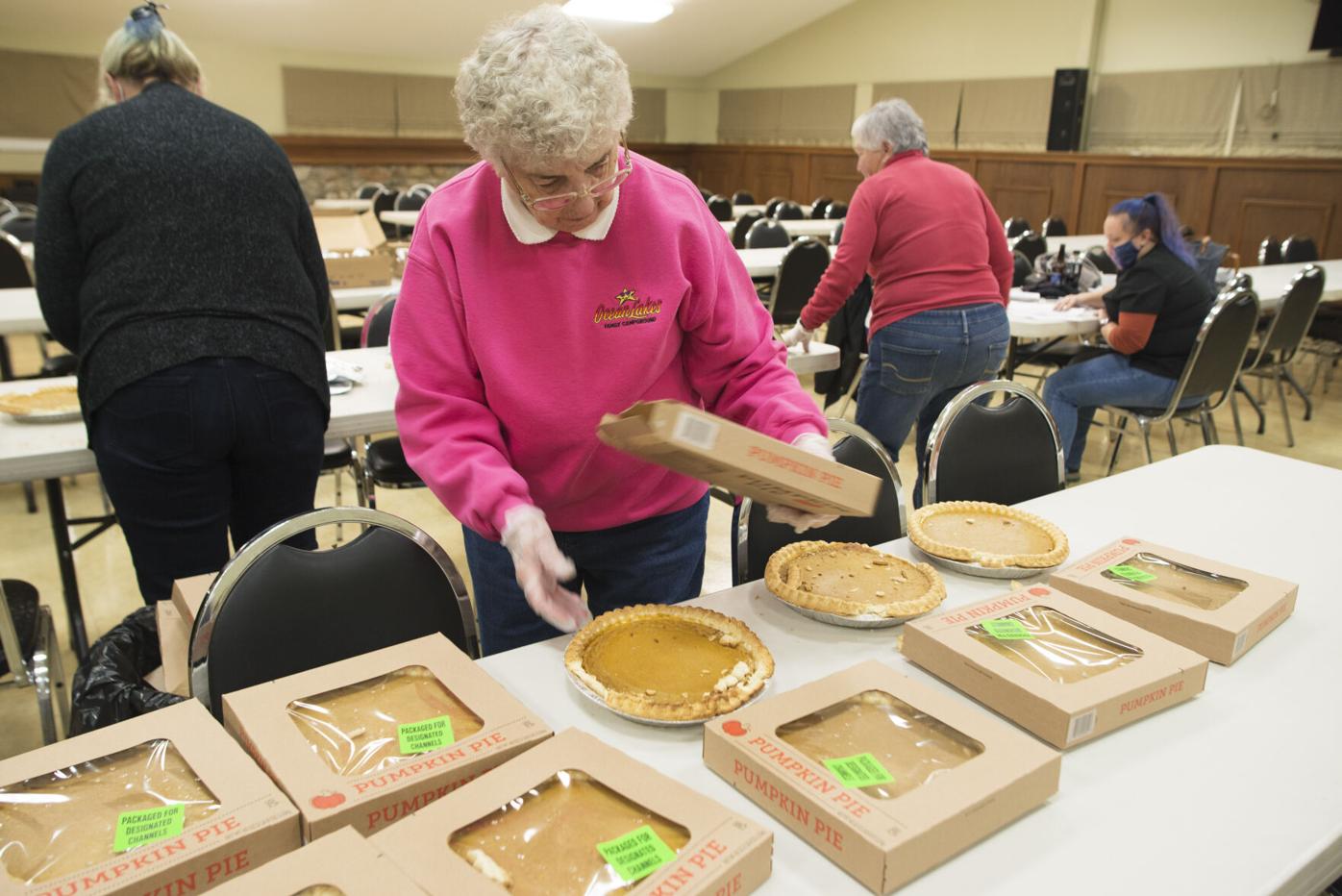 A volunteer prepares to slice pies for take-out Thanksgiving dinners at The Elks Lodge in Bennington on Tuesday night. 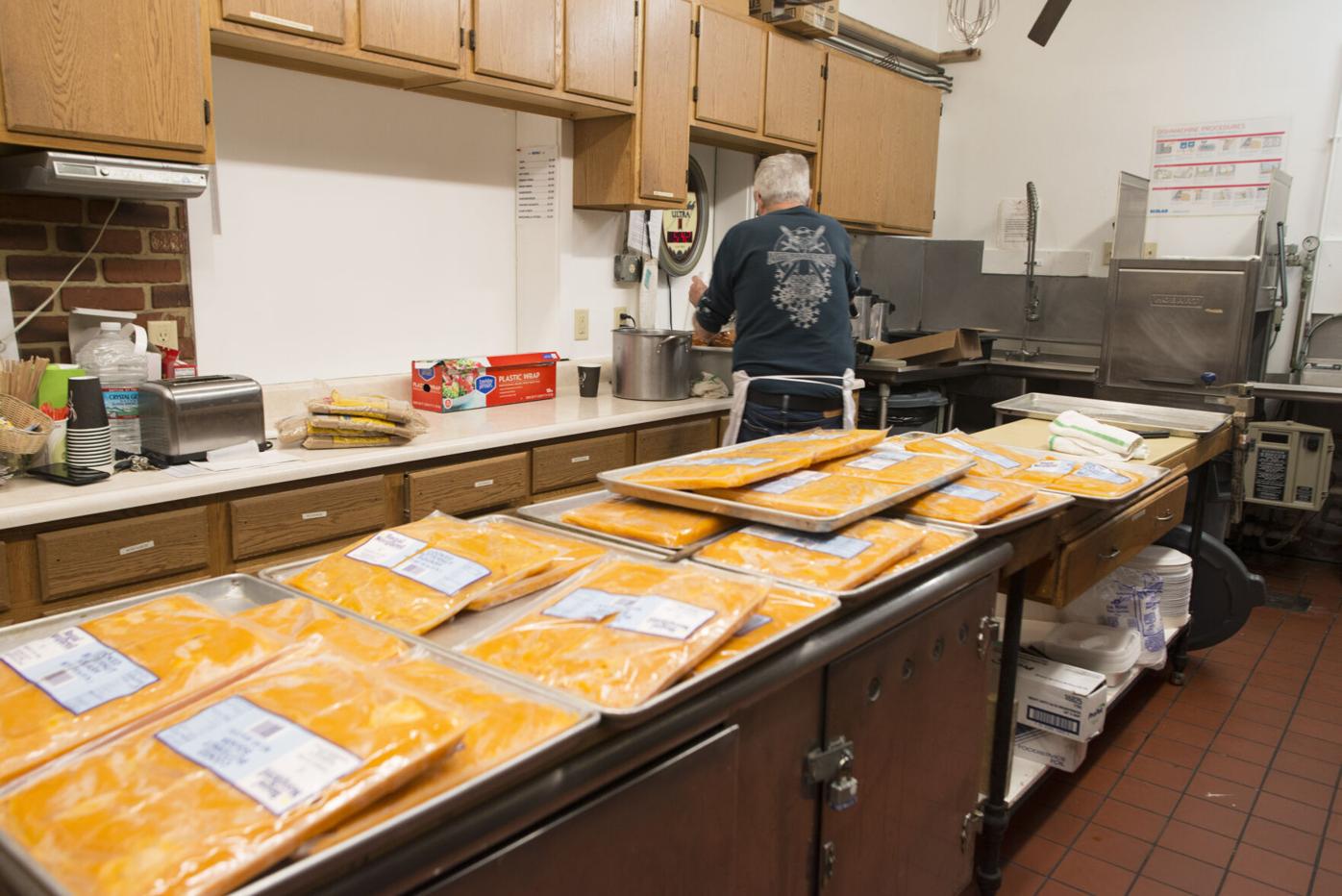 Butternut squash being prepared in the kitchen by a volunteer at The Elk's Lodge on Tuesday. 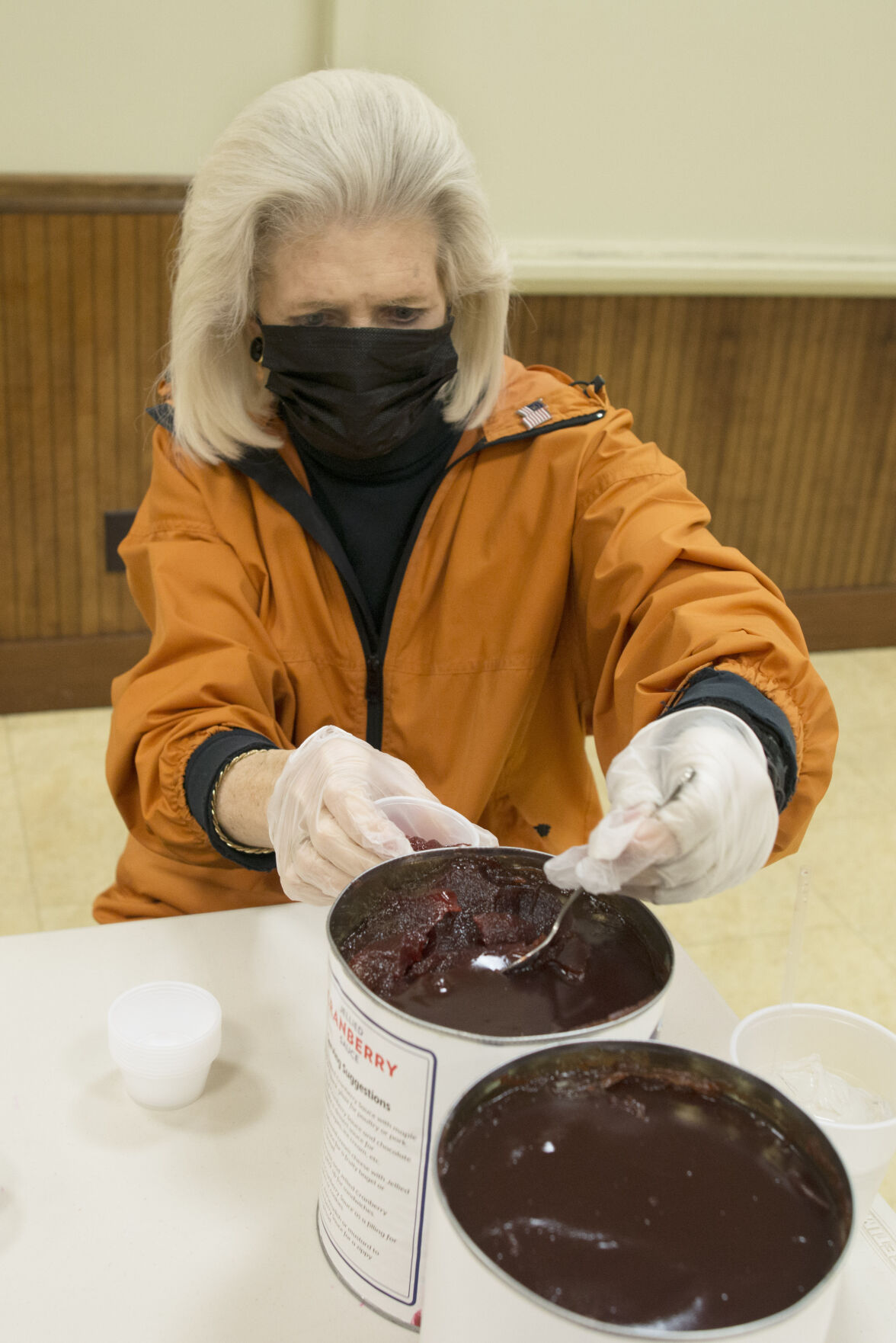 State Rep. Mary Morrissey prepares small containers of cranberry sauce in preparation of a Thanksgiving take-out dinner from The Elk's Lodge. Meals were handed out on Wednesday. 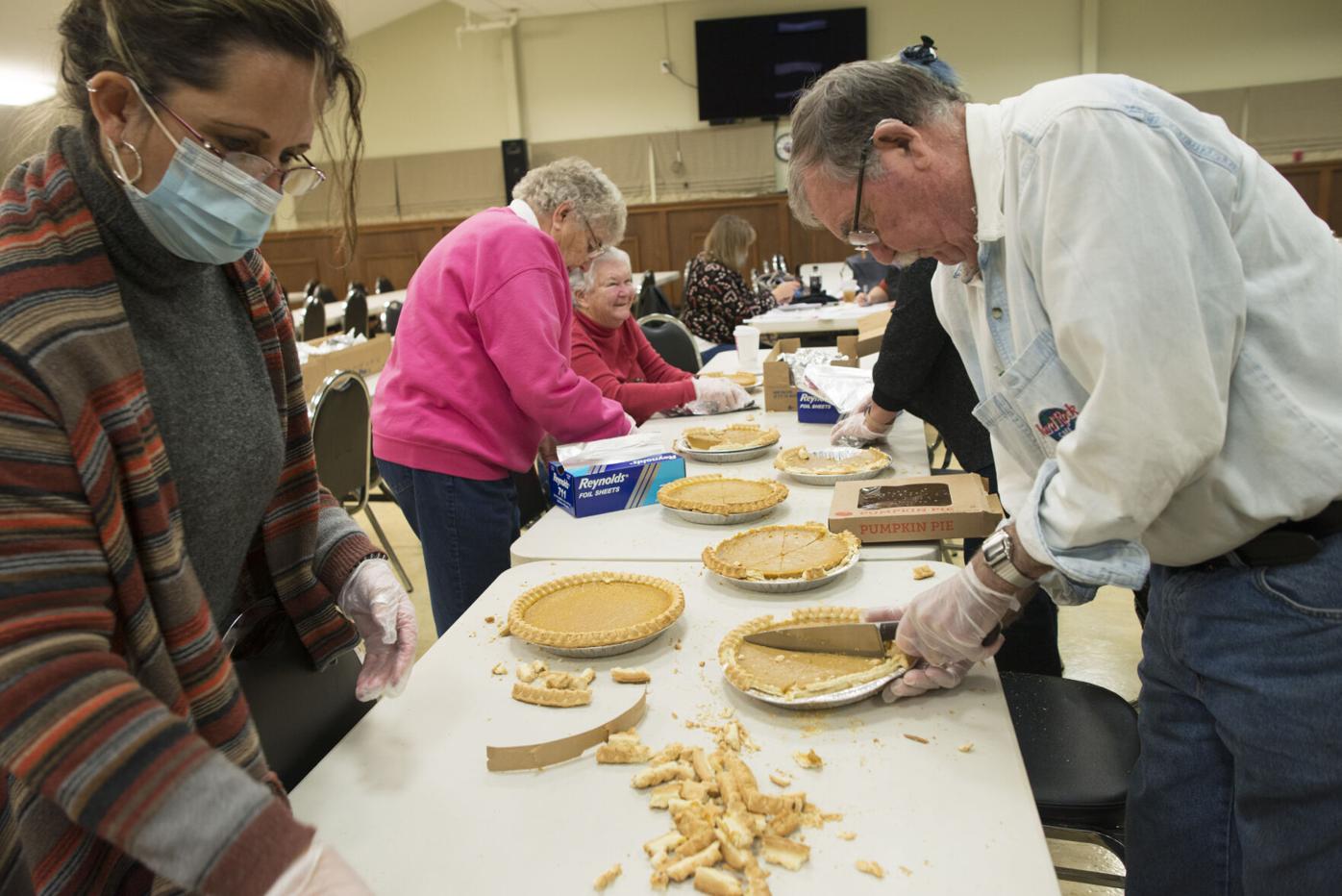 Volunteers, including Yolanda Cone, left, slice pies in preparation for a Thanksgiving takeout dinner from The Elk's Lodge.

A volunteer prepares to slice pies for take-out Thanksgiving dinners at The Elks Lodge in Bennington on Tuesday night.

Butternut squash being prepared in the kitchen by a volunteer at The Elk's Lodge on Tuesday.

State Rep. Mary Morrissey prepares small containers of cranberry sauce in preparation of a Thanksgiving take-out dinner from The Elk's Lodge. Meals were handed out on Wednesday.

Volunteers, including Yolanda Cone, left, slice pies in preparation for a Thanksgiving takeout dinner from The Elk's Lodge.

BENNINGTON — Everyone deserves a hot meal for the holiday.

At least that’s what a few community members believe — and put into practice in a big way this season.

At the Elks Lodge in Bennington, Jim Cone, 57, oversaw the packing of 800 Thanksgiving meals before the holiday. People were invited to pick up a free, hot dinner on Wednesday afternoon.

“This started about 30 years ago. It’s just mushroomed. First you had the parents, now you have the grandkids coming and helping. It’s a feel-good thing,” Cone explained. “You get the little old lady crying because she wouldn’t have a Thanksgiving meal without us.”

Cone and others began work Tuesday night, slicing pies, cooking and packing. They returned in the morning to put dishes in the oven. “It’s a lot of community volunteers,” he said.

One was state Rep. Mary Morrissey, R-Bennington. “It just isn’t Thanksgiving without doing this project that helps others in the community,” said Morrissey, as she packed small dishes of cranberry sauce.

In past years, the basketball and wrestling teams would pitch in.

Donors include Shea Family Funeral Homes and several local car dealerships. And it’s not a small bill to front. Cone estimates that the meal cost about $6,000 to $8,000 to put together.

He hosts a fundraiser each summer called “Thanksgiving in July” to help absorb costs. As a member, the Elks Lodge lets him use the space for that, too, with lots of support from fellow members.

The program is such a big production that it has its own checking account now. Some members send checks throughout the year. Anyone can do the same by sending money to the Bennington Elks Thanksgiving Giveaway.

By Wednesday night, Cone estimates that the volunteers served well over 700 meals. The rest went to local shelters, something directors said is a real need.

“In my experience, we get a lot of canned food donated. And a lot of produce and those things require cooking and time. People who struggle with poverty and homelessness often don’t have the tools and resources they need for preparing food, so having food that’s already made is a huge need and always goes really fast,” said Chloe Viner Collins, executive director of the Bennington County Coalition for the Homeless.

And this year, provided meals might be especially important — not just for those who struggle with homelessness. Americans contended with high demand, inflation and supply chain issues as they prepared their feasts. For Vermonters in particular, who spend 40 percent more on groceries than the national average, a free meal is a boon.

Over in Hoosick Falls, NY

Just across the border, some village residents took on Cone’s mantle.

For the second year, free meals were provided at the American Legion on Thanksgiving Day, with sit-down, takeout and delivery options offered.

“There’s a lot of people out there that need help. And I feel like that’s what we’re here for — we’re here on this earth to help other people,” said Bob Andrew, who organized the event with his family.

According to Data USA, 10 percent of Hoosick Falls residents live at or below the poverty line.

“I don’t want to turn anyone away,” Andrew told the Banner just days before the event. “I want to make sure everyone gets fed.”

By Tuesday, 30 households had already signed up to reserve a delivery.

“Last year, with everything that everyone was going through, we just wanted to do something nice for the community,” Andrew said. Many volunteers got involved this year, including Jane Ellis and her daughters.

On Thanksgiving Day, Kayla Schnoop — Andrew’s niece — took charge of the delivery team from 11 a.m. to 1 p.m. “We divided and conquered,” she said of her team.

They delivered dinner to Cumberland Farms, the Sand Bar and local grocery stores to ensure that those working on the holiday still got a meal.

Leftovers were donated to The Danforth Adult Care Center.

Tammy Schnoop, Kayla Schnoop’s mother and Andrew’s sister, was instrumental in the event. Her husband, Darren Schnoop, is deployed in Kosovo with the Vermont National Guard.

And the family represents a larger community, one that cares deeply about food insecurity. The Hoosick Area Church Association’s food pantry recently distributed about 180 Thanksgiving boxes, with enough food for three days packed in each.

But association Executive Director Dianne Hosterman was quick to point out that, when holiday giving abates, the problem of food insecurity remains.

“The need is here, not just at Thanksgiving,” she said.