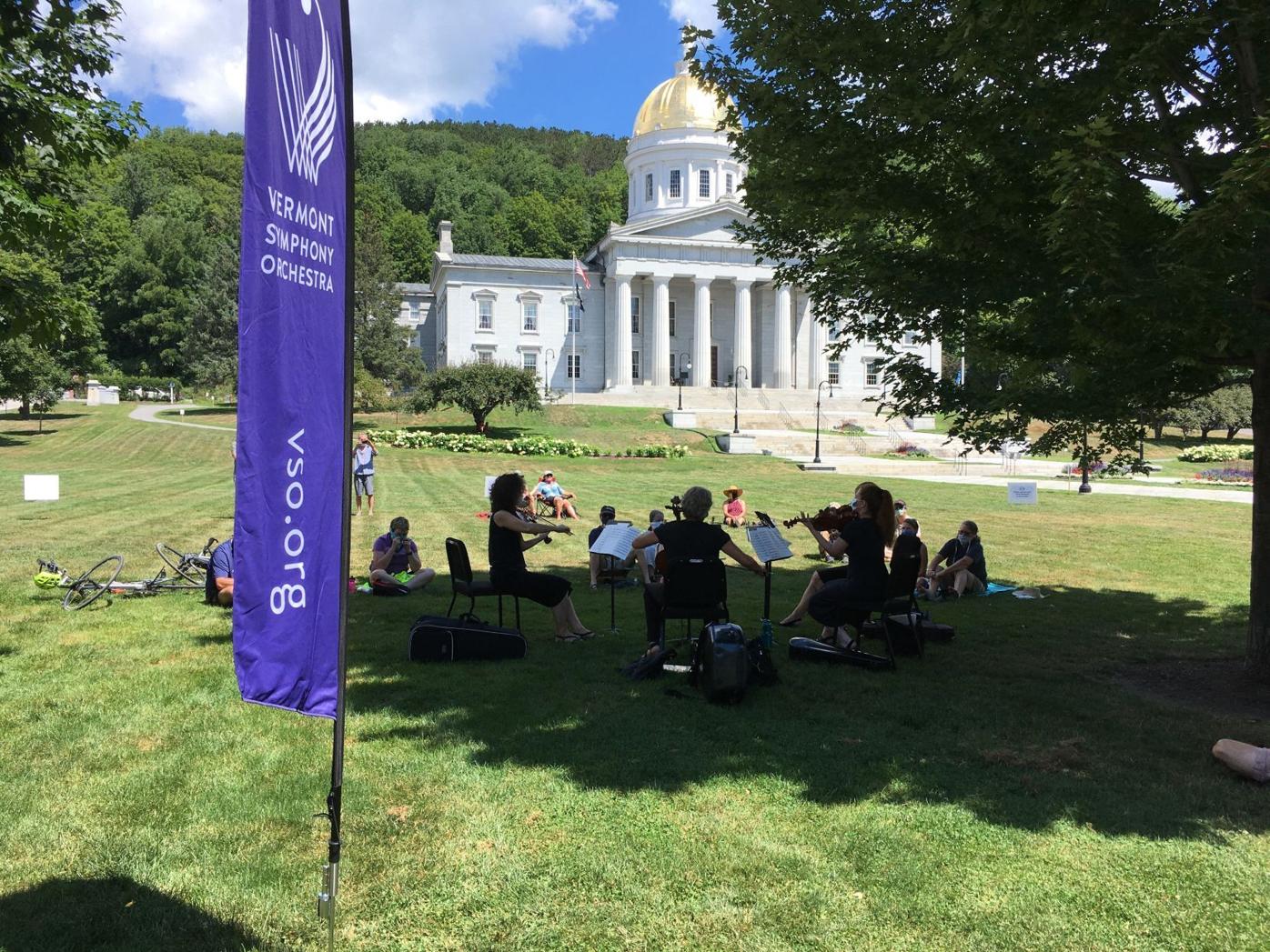 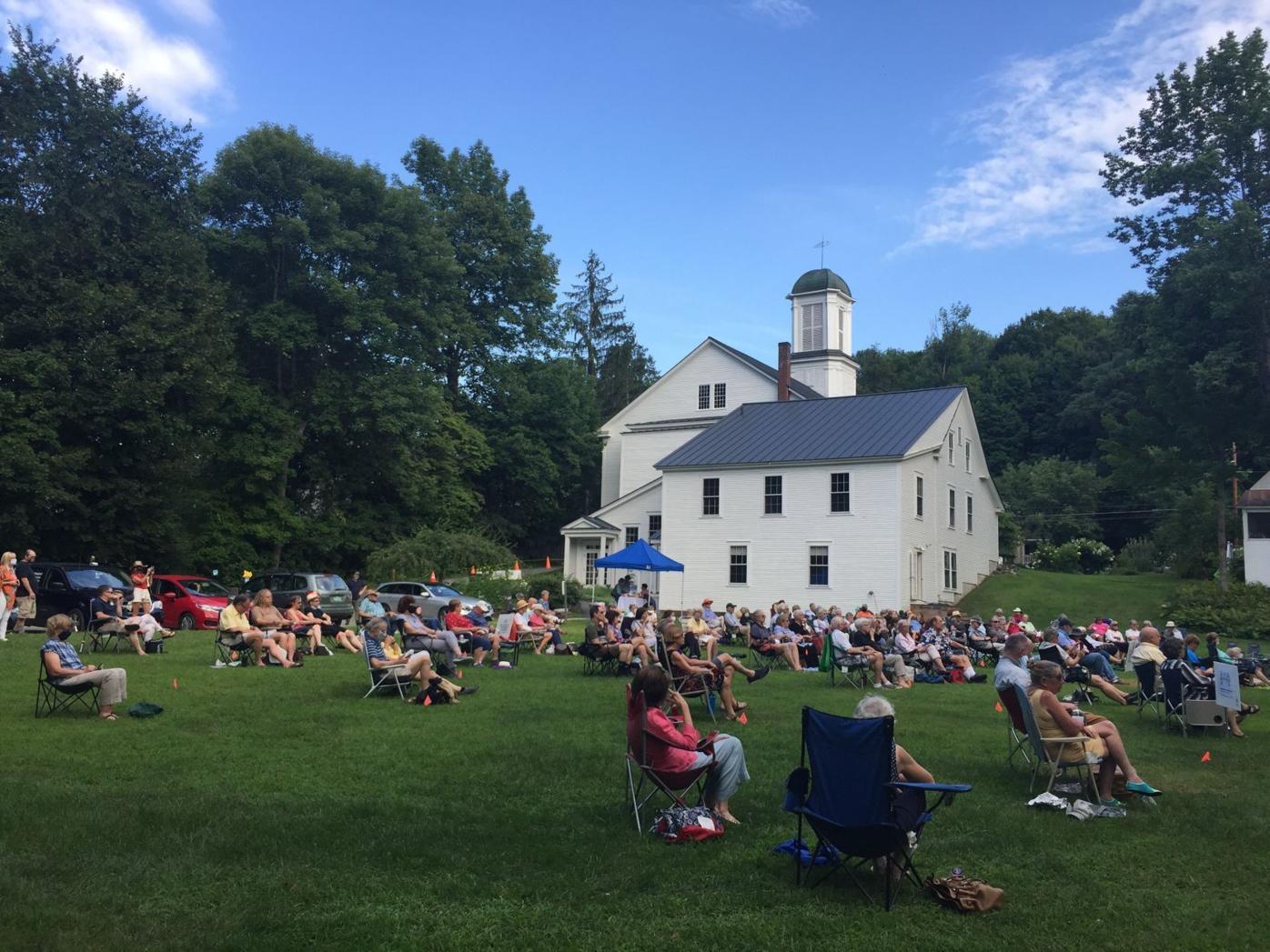 In preparing for the Vermont Symphony Orchestra’s July statewide showcase of its players, Janet Polk, the VSO’s longtime principal bassoonist, faced a challenge.

“It is a great mystery in the woodwind world why there is so little music written for the woodwind quartet — add a horn, and there are hundreds of wonderful possibilities for programs,” she said. “Our collective knowledge of the repertoire was very small. Luckily, (VSO principal flutist) Melissa Mielens and I teach at the University of New Hampshire, which has an extensive in-house woodwind chamber ensemble library.

“Many of the pieces I found were by American composers which inspired the theme of this quartet program,” Polk said.

From July 1 to 21, The VSO’s “Close to Home & Far Afield: Homes & Gardens Tour” will feature four ensembles — the VSO Woodwind Quartet, VSO String Quartet, VSO Brass Quintet and the VSO Juke Box String Quartet — in 17 concerts across the Vermont. All of the concerts are free and outdoors at a broad spectrum of venues.

“The point is to underscore and underline our mission as a statewide orchestra. That’s something we have to live all the time — summer, fall, winter spring,” she said.

“Getting out of COVID and to where everyone’s looking forward to live anything again, be it music, theater, dance,” Brunelle said, “the best response we could think of was to take advantage of this great state and hit the road!”

The VSO Woodwind Quartet will take the audience through 120 years of American music — from Tin Pan Alley to Carnegie Hall, from a bumpy bike ride with Alyssa Morris’s “Motion” to the fairgrounds with Amy Beach’s “Carnival.”

The VSO String Quartet will focus on familiar sounds and folk melodies that celebrate the season — in works by Antonin Dvorak, William Grant Still, Gwyneth Walker, Alexander Glazunov and a suite from classic American musical theater.

Enjoying the American brass band tradition, the VSO Brass Quintet program will include timeless favorites, cinematic moments and new sounds in music ranging from Dvorak to Sousa to Stephen Foster and Lady Wray.

The already established VSO Jukebox String Quartet, in its usual eclectic mix of classical and rock music, will explore the folk songs of the Danish String Quartet, rock arrangements from Jimi Hendrix to Tool to Nirvana, rounded out with Scott Joplin and Elena Kats-Chernin. Other than the long established Juke Boxers, the ensembles were chosen in accordance with musician’s union agreement. Principals of each section must be offered first opportunity.

“We had made the decision to do quartets and quintets, so we had to start with our principals, see who’s interested and available,” Brunelle said. “People are getting other wonderful performance opportunities. There were some people we would start with but they’re already going to be at Glimmerglass Festival, or somewhere. If we can’t take our principals, we take the next chair down.”

Once selected, the ensembles chose their own repertoire that reflected their abilities and interests.

“They’re coming up with themes and playing music they love to play,” Brunelle said. “Each one is deciding their own.”

Paying for the tour is a mix of the VSO’s state appropriation, individuals and small businesses in each town, and the Music Performance Trust Fund.

“The audience is not paying for it,” Brunelle said. “We asked all around and are getting lots of donations towards it.”

As to the future of the VSO, Brunelle is optimistic.

“Everyone is in a different place emerging from the pandemic,” Brunelle said. “Some orchestras are ready to go for the next year and have announced everything; some are one month out.

“We’re about six months out, so at the end of June, we’re going to be reaching out to our subscribers about our fall-into-winter season,” she said. “We’re having to split this upcoming season into two sections, one announced now and the other in early September for 2022, because of all the unknowns.”

“There’s all that risk around earned income (box office). That’s a big question mark, so we’re having to be a bit more tentative in our planning,” Brunelle said

“But, for now, we’re doing well and sticking to our mission — and looking to some pretty interesting partnerships that are coming up.”