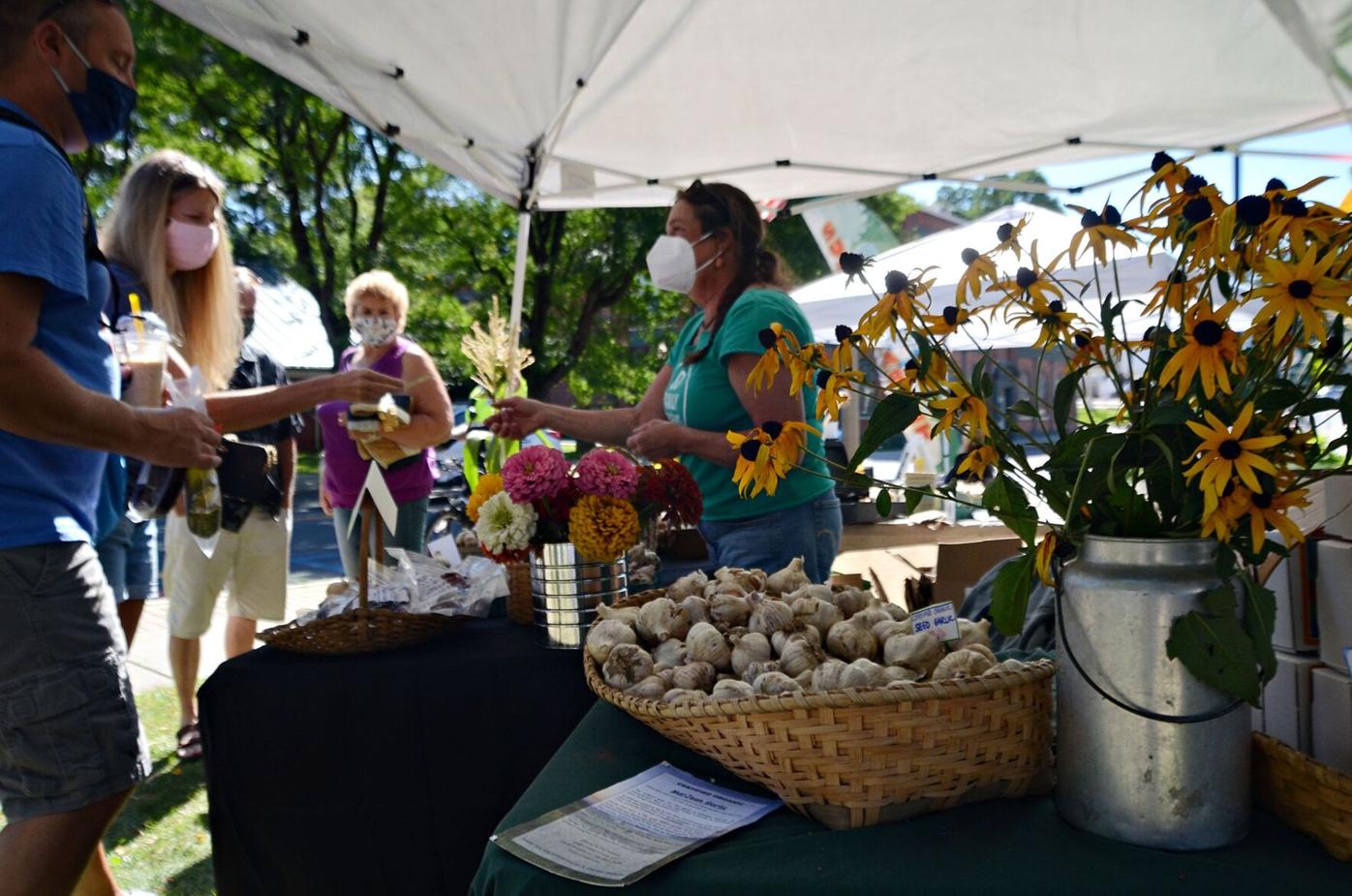 Garlic for sale from Marjean Garlic, during the Southwestern Vermont Chamber of Commerce’s Garlic Town, USA event in downtown Bennington on Sept. 5, 2020. 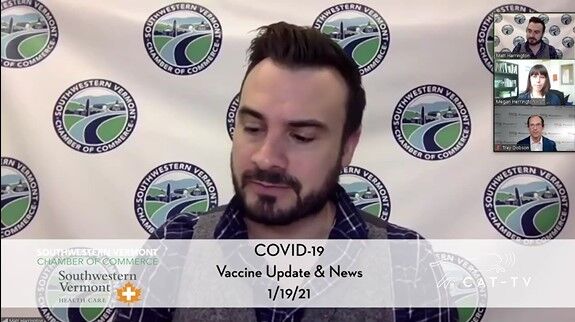 Matt Harrington, executive director of the Southwestern Vermont Chamber of Commerce, speaks with Megan Herrington of the Vermont Department of Health, center right, and Dr. Trey Dobson of Southwestern Vermont Medical Center, during a COVID-19 update produced by the chamber and CAT-TV.

Garlic for sale from Marjean Garlic, during the Southwestern Vermont Chamber of Commerce’s Garlic Town, USA event in downtown Bennington on Sept. 5, 2020.

Matt Harrington, executive director of the Southwestern Vermont Chamber of Commerce, speaks with Megan Herrington of the Vermont Department of Health, center right, and Dr. Trey Dobson of Southwestern Vermont Medical Center, during a COVID-19 update produced by the chamber and CAT-TV.

BENNINGTON — After a year that challenged business owners and institutions throughout Vermont, the Southwestern Vermont Chamber of Commerce hosted a night of celebration, marking successes in spite of the pandemic, and presenting awards to seven members.

Titled “Shires Strong,” the Chamber’s annual membership meeting, promoted as the biggest night for businesses in the region, took place over Zoom on Wednesday.

“There are a lot of silver linings and ‘ah-has’ we found this past year,” the chamber’s executive director, Matt Harrington, said in his address. “We found the pivot to a digital platform like Zoom and Facebook and the massive adoption of that by almost all businesses allowed us to cut costs and communicate at a heightened, much-needed level.

“We made key decisions earlier in the year when COVID first hit — producing less travel guides, rearranging staff, closing the chamber to the public, managing costs — that I think were important and helped us survive.

“And yet, we still did a Garlic event, Winter Homebrew, created a Golf Classic tournament and utilized Restart Grants of $50,000 collectively to leverage our great Southern Vermont tourism assets,” he continued. “Every year I think I say how proud I am of the staff and board, but this year is especially sobering and meaningful.”

In 2020, Harrington said, the chamber added 39 new members and saw 373 members renew. “That is huge in a year that saw financial stress and survival mode for many of our members,” he said.

Throughout the year, the regional chamber focused on COVID Pandemic briefs, constant communication emails to members, a business resource web page, Take Out Week to support local restaurants, a partnership between the hospital and restaurants to deliver donated meals to frontline workers, and personal protective equipment packs for members operating a business.

The chamber fielded a flurry of labor and workforce questions daily, as well as travel restriction questions, Harrington said. The chamber and board directors played an active and critical role in advocacy efforts to connect struggling businesses with available funds, as well as voicing concerns and challenges at many legislative committee hearings.

One of the chamber’s most popular efforts was in partnership with Southwestern Vermont Medical Center and CAT-TV for their ongoing digital programs that updated residents in Bennington County on COVID-19 efforts and vaccine distribution, Harrington said. The chamber series had 15 live and recorded telecasts throughout the year, which included the hospital and other partners.

“Evolved is exactly how I would describe the state of our Chamber today,” said board president Brian Maggiotto of The Inn at Manchester. “After relying on each other for ten months, the idea of ‘stronger together’ has a whole new meaning and has proven to be the glue that has held our economy together through the darkest days thus far.”

A highlight of the evening was the announcement of seven awards, in new categories chosen to reflect the evolving regional focus of the chamber. “Although the previous awards hold a special place in our heart, we think these new awards represent the mission and vision of this chamber and our new direction,” Harrington said.

The Lifetime Achievement Award was presented to Art Whitman of A&K Agriservices, the former founder of Whitman’s Feed Store and a director on the Chamber board.

The digital event was co-produced by CAT-TV, and ran a little over an hour. The annual membership meeting also introduced a 2021 budget for the organization, which the membership approved with both a voice vote and online clicks.

The chamber saluted retiring board members Sylvia Pike, Strano and Spivak, and welcomed new directors Erica Lawrence-Dearstyne of Union Underground and Ron Levene of The Barn at Center Hill, both of which are located in Manchester.

The chamber welcomed a new slate of officers, including Shannon McLenithan of The Bank of Bennington as the second vice president, replacing Michael McKenna, and William Deveneau of William C. Deveneau, Esq. PLC as treasurer, replacing Tom Dailey, who had served as treasurer for the better part of a decade.

Maggiotto and Matt Willey of Ramuntos, The Avocado Pit and The Buckstop returned as president and first vice president of the board, respectively. Whitman and Brenda Jones also returned as ex officio executive committee members.

The new board directors and the slate of officers were decided on through a digital ballot sent to members in November.

The meeting began and ended with musical performances by Old Mill Road Recording Studio and composer and performer Benjamin Lerner.

David LaChance can be reached at dlachance@benningtonbanner.com.

David LaChance joined the Bennington Banner as news editor in 2017.