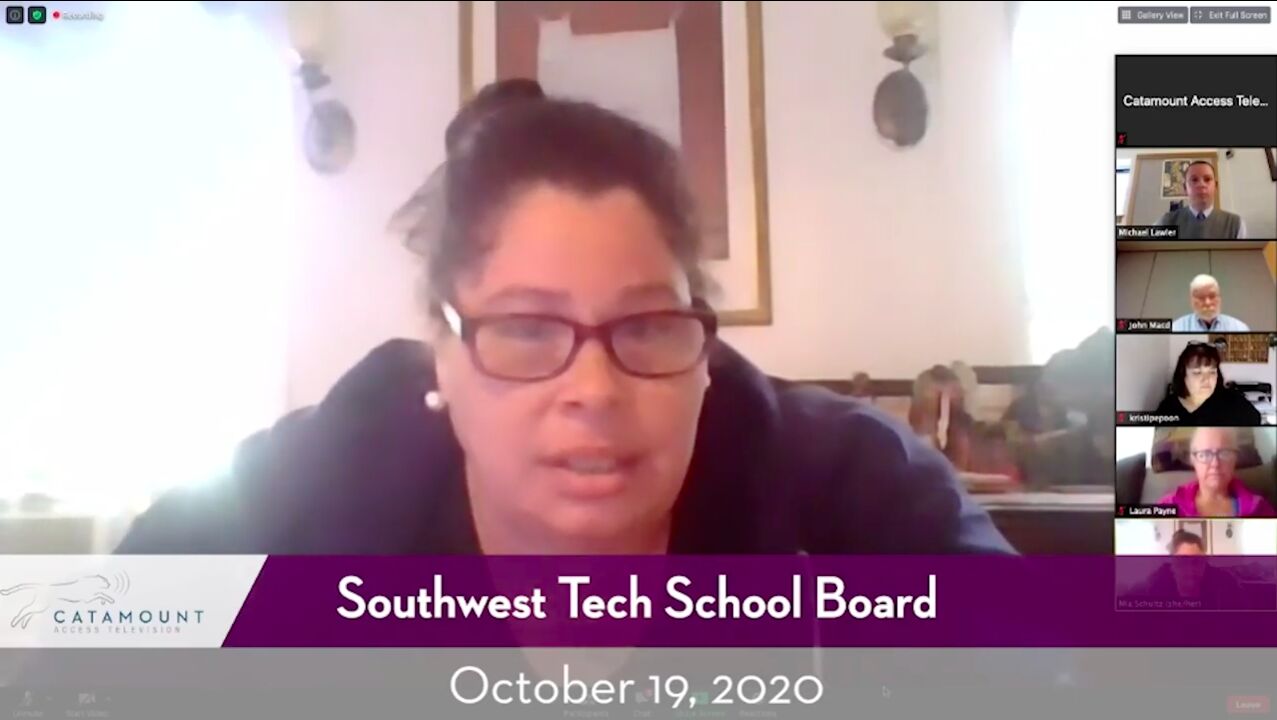 Mia Schultz addresses the Southwest Vermont Regional Technical School Board on Monday. She demanded the immediate removal of Ed Letourneau from the board. 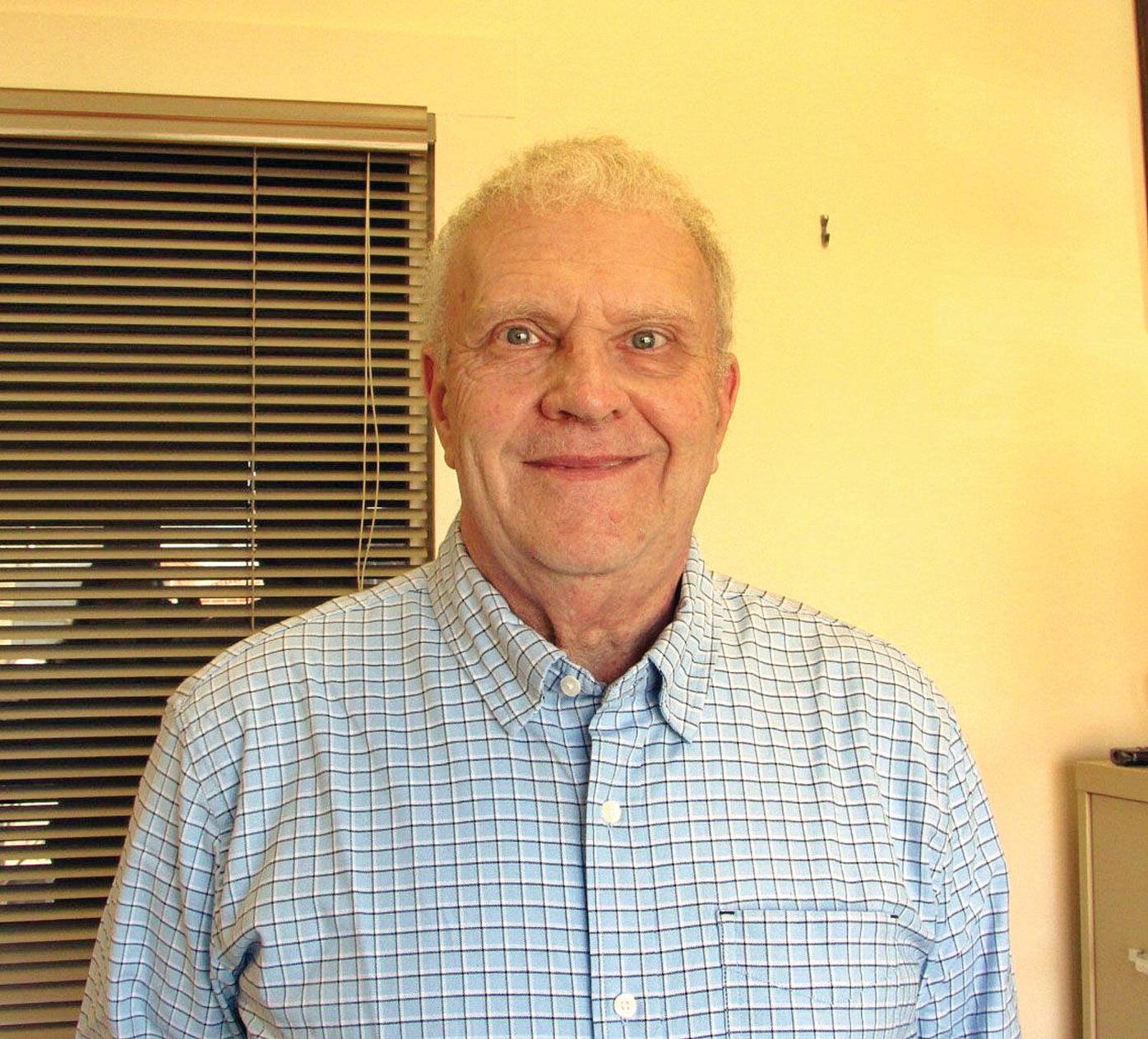 BENNINGTON — At its meeting on Monday morning, the Southwest Vermont Regional Technical School Board called for the immediate removal of board member Edward Letourneau regarding Facebook comments about the Black Lives Matter movement and other issues related to race.

After an hour-long executive session in the middle of the meeting, the board voted unanimously to not only condemn the comments, but also to take the next legal steps with the state Board of Education and the Vermont Attorney General’s Office to remove Letourneau.

At Monday’s meeting, comments from the public echoed the call to oust Letourneau, who has been a member of the board since 2005, including as its vice chairman twice.

“We’ve already asked [Letourneau] for his resignation, but we’ve had no response yet,” said SVRTSD chairman John MacDonald during Monday’s meeting. “After consulting with our [attorney], we don’t have the power to remove him from the board without going through first to the state board and the attorney general. We still wish to have him resign or removed.”

When reached by telephone on Tuesday afternoon, and asked about any intention to step down, Letourneau offered no comment.

At the end of September, a formal request to resign was sent to Letourneau, but more than three weeks later, he has not relinquished his position.

Before the executive session, members of the public had very strong opinions on the matter. “[Letourneau’s] comments were inappropriate and I applaud the board’s effort to get him to quit,” said Kristi Pepoon. “If the board has the power to remove him, I request that they do that. It’s unacceptable to have him there.”

Laura and David Payne of Bennington both said they don’t believe Letourneau should be making decisions about the education of the students of Bennington.

“There’s no world in which [Letourneau’s] comments are OK,” Laura Payne said. “It’s wrong that he occupies this position of power.”

“I’m deeply disturbed by his behavior,” David Payne said. “It’s offensive, not only to people of color, but also white students. He disparages the educators, that teachers aren’t doing their jobs. He represents [the board], and if he’s allowed to remain, we lose faith in the board members. We need to address this situation.”

The Mount Anthony Union school board chairman, Tim Holbrook, asked Letourneau to step down from the MAU board as well, but no decision had been made as of yet. The MAU board is meeting on Wednesday at 6 p.m. and while Letourneau is not specifically on the agenda, it is believed the issue will be discussed.

In a Banner story three weeks ago, the embattled board member has insisted he was exercising his right of free speech and speaking as an individual, not a member of the school board.

Letourneau, of Bennington, said at the beginning of the month that he stands “by the rights provided in the First Amendment. They are not lost or become silenced because someone chooses to serve on a board.”

About Black Lives Matter, he stated, “I do not approve of BLM.

The riots, looting and burning they are involved in is not normal behavior. Some think it’s a terrorist organization, and it may well be. I do understand the mindset and compliant of BLM; but I also understand that if you are not breaking the law, the chances of contact with the police are nil. It’s how the world works, and they failed to understand it.”

Holbrook also has said he will remove Letourneau from the MAU Board’s education and finance committees if he does not step down.

Meanwhile, several local residents and officials said they are exploring legal or electoral methods of removing Letourneau if he won’t step down.

“I have three kids in high school, all Black and brown,” said resident Mia Schultz during Monday’s Zoom meeting. “I’m urging... no, I’m demanding that this board takes care of my kids. We have to make sure my kids are safe and allowing [Letourneau] to continue to make decisions for my kids and the safety of my kids means you do not care about my kids.”

Adam Samrov can be reached at asamrov@benningtonbanner.com or on Twitter

"I have three kids in high school, all Black and brown. I'm urging... no, I'm demanding that this board takes care of my kids. We have to make sure my kids are safe and allowing [Letourneau] to continue to make decisions for my kids and the safety of my kids means you do not care about my kids."

Early childhood educators call on Letourneau to resign, Page A4