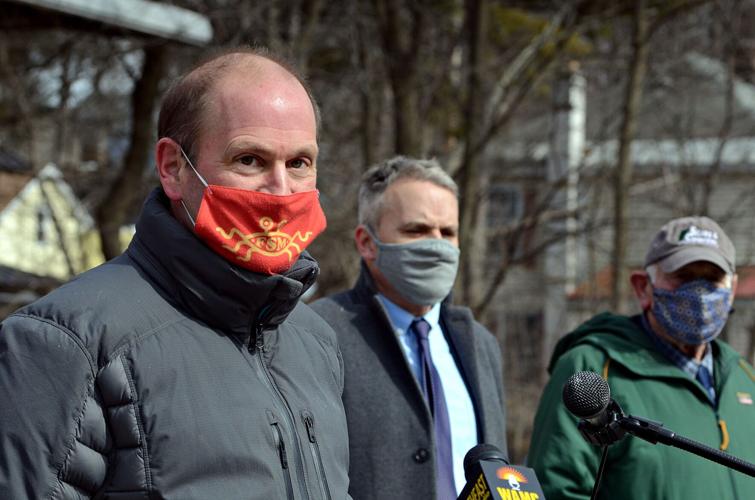 Bennington Sens. Dick Sears and Brian Campion and supporters of state legislation to allow residents affected by toxic industrial or other substances to seek to have polluters pay continued medical monitoring costs, announced a new version of their bill Friday in North Bennington. Previous versions of the bill were twice vetoed by Gov. Phil Scott, who expressed concerns the bill could have a negative effect on businesses in Vermont. 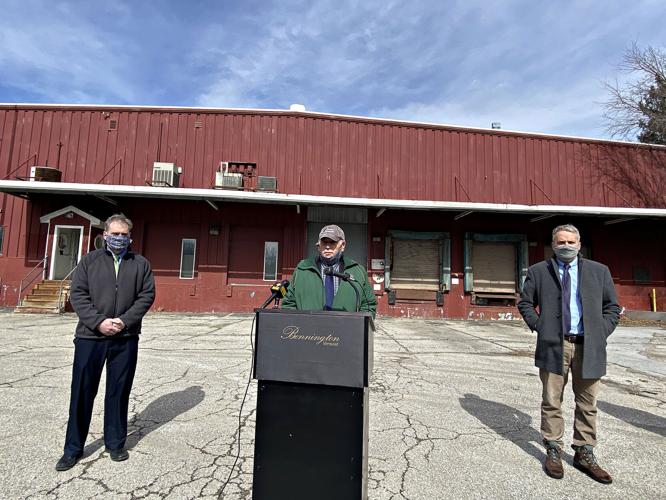 CAROLINE BONNIVIER SNYDER — BENNINGTON BANNER {div}Bennington Sens. Dick Sears and Brian Campion and supporters of state legislation to allow residents affected by toxic industrial or other substances to seek to have polluters pay continued medical monitoring costs, announced a new version of their bill Friday in North Bennington. Previous versions of the bill were twice vetoed by Gov. Phil Scott, who expressed concerns the bill could have a negative effect on businesses in Vermont.{/div} 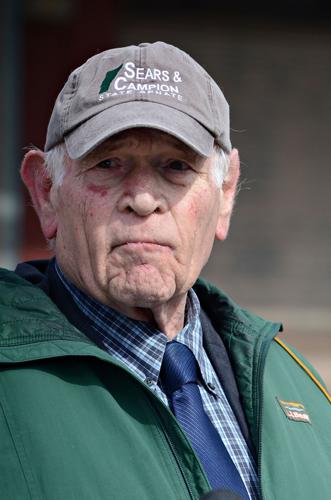 Bennington Sens. Dick Sears and Brian Campion and supporters of state legislation to allow residents affected by toxic industrial or other substances to seek to have polluters pay continued medical monitoring costs, announced a new version of their bill Friday in North Bennington. Previous versions of the bill were twice vetoed by Gov. Phil Scott, who expressed concerns the bill could have a negative effect on businesses in Vermont.

CAROLINE BONNIVIER SNYDER — BENNINGTON BANNER {div}Bennington Sens. Dick Sears and Brian Campion and supporters of state legislation to allow residents affected by toxic industrial or other substances to seek to have polluters pay continued medical monitoring costs, announced a new version of their bill Friday in North Bennington. Previous versions of the bill were twice vetoed by Gov. Phil Scott, who expressed concerns the bill could have a negative effect on businesses in Vermont.{/div}

BENNINGTON — The sponsors of legislation to help Vermonters obtain medical monitoring after exposure to toxic substances announced a third legislative effort on the issue Friday, proposing a new version of a bill that was twice vetoed by Gov. Phil Scott.

Sens. Brian Campion and Dick Sears, both Bennington Democrats, and supporters of the proposal, spoke Friday afternoon outside the former ChemFab Corp. factory building in North Bennington. The plant is considered by the state a primary source of PFOA contamination of hundreds of local wells.

The senators said the newly drafted medical monitoring bill, following prior versions in 2019 and 2020, addresses concerns voiced by the governor that such legislation would discourage companies from locating or expanding in Vermont.

“Legislation has twice passed by the House and Senate that would help address this issue and both times the bill has been vetoed by the governor,” Campion said.

He added, “For those concerned about the impact of medical monitoring on business interests, this bill is more protective of the vast majority of Vermont businesses than the decision [in U.S. District Court]. That’s because it exempts small businesses, municipalities, and farmers — while the court’s decision does not.”

A 2019 determination by Judge Geoffrey Crawford that plaintiffs can legally seek medical monitoring costs came during an ongoing class-action suit by a number of Bennington residents in federal court in Rutland.

The suit seeks those and other damages from Saint-Gobain Performance Plastics, which purchased the former ChemFab Corp. two years prior to closing the North Bennington plant on Water Street in 2002.

Saint-Gobain is considered by state environmental officials to be the responsible party for the PFOA, believed to have spread through exhaust stacks around two factory sites in town and worked into the groundwater.

“If the court’s decision stands,” Campion said, “small businesses, municipalities and farmers will have exposure for liability they will not have in our bill.”

Sears, who lives within the identified PFOA (perfluorooctanoic acid) contamination zone in Bennington and is a plaintiff to the federal suit, said, “This bill will help protect Vermonters who have been exposed to toxic substances, through no fault of their own, by making the polluter pay.”

While the area has worked to find other sources of clean drinking water for those with contaminated wells – largely funded by Saint-Gobain through consent agreements with the state Agency of Natural Resources — medical monitoring and other issues remain to be fully addressed, he said.

Medical monitoring, he said, “was designed to catch cancers early, and not have to wait until somebody is almost dead before we find out that they have contracted this cancer. And we know that these chemicals are cancer causing.”

Sears also noted that the state has begun an expected hearing process to consider officially reclassifying the groundwater in contaminated areas as below state drinking water standards.

Even though residents may have access to clean municipal water supplies, he said, a reclassification could affect the use of their property. Others have said that property values could be negatively affected.

“Those are the types of things that are happening,” Sears said, “and I think it’s time to hold the polluters accountable.”

“Here in Bennington County, we’ve lived with the devastating impacts of toxic contamination in our community,” Campion said. “We’ve watched what happens when a corporate polluter harms Vermonters’ health and property, and threatens our bodies with long-term diseases — and then leaves us to pay the price.”

The legislation “will better protect Vermont victims of toxic pollution, and give them more a fighting chance at having their medical screening costs covered by a toxic polluter,” he said.

“In our opinion,” he added, “failing to enact this legislation is a lose-lose proposition for Vermont.”

Long-term medical monitoring is sought in the lawsuit primarily for those who drank contaminated water and who now have elevated levels of PFOA or related PFAS (per- and polyfluoroalkyl substances) in their blood.

PFOA has been associated through medical studies to ulcerative colitis, thyroid disease, testicular cancer, kidney cancer and diagnosed high cholesterol, and a person’s blood level is known to go down only slowly over many years.

James Sullivan, who lives “downwind of this ChemFab property,” said he has, like many neighbors, “a significantly elevated level of PFAS” in his blood, and his family likely will have to monitor that “for the rest of our lives.”

Sullivan, a lead plaintiff in the lawsuit being pressed against Saint-Gobain by attorneys from three law firms, said, “This bill won’t help my family, but for other Vermonters in this terrible situation, I strongly believe polluters should be responsible for these costs, not us.”

Loreen Hackett, of nearby Hoosick Falls, N.Y, where residents – including her family — were also affected by PFAS contamination from industrial operations there, said she would “love to see New York state follow suit” on the type of legislation filed here.

“Kudos to the senators for taking another step forward and trying to protect your families and your communities,” she said. “Your neighbors over in Hoosick Falls have been envious of many of the steps that Vermont has taken since the beginning of this public health crisis.”

Since pollution of Hoosick area water supplies was discovered in 2015, shortly before well testing began around the ChemFab plants here, Hackett has become an activist for legislation in her state and nationally to deal with widespread PFAS contamination around multiple industrial sites that have been identified in the U.S. since the early 2000s.

“Making polluters pay just seems the most sensible option, because it is their fault,” she said.

ChemFab Corp. was formed in 1968 and first operated in a now-vacant building at 108 Northside Drive, before moving a decade later to a new building at 1030 Water St. (Route 67A).

PFOA was a component of liquid Teflon, with which the company coated fiberglass and other fabrics and dried them at high temperature.

Beyond the similarities with the experience in the Hoosick area, a former factory on Route 346 in Pownal, once operated by principals in what later became ChemFab, has been identified by the state as the source of PFAS pollution of well water supplies in that town.

“It’s too late for this legislation to help our community’s toxic PFAS contamination crisis,” Campion said. “But we want the next Vermont community dealing with chemical contamination to have the comfort of knowing they won’t have to pay medical monitoring costs out of pocket, or not get the care they need if they can’t afford it.”

The Bennington senators said the first part of the proposed bill “provides a legal remedy which allows Vermonters to hold polluters accountable for the costs of medical monitoring required as a result of exposure to toxic chemicals. The bill also provides a second legal remedy which would allow the state government to hold the companies that make dangerous chemicals liable for the harm they cause to Vermont’s air, land, and water.”

Jon Groveman, of the Vermont Natural Resources Council, said during the conference that it’s time for Vermont to ensure that victims of toxic pollution can recover costs from polluters for doctor visits and laboratory tests before they contract a disease.

The new version of the bill has been crafted to address concerns expressed by the governor in his vetoes of the original bill.

“The Legislature should act on this bill swiftly and the governor should sign the bill into law,” he said.

Sears said that unfortunately there is not be enough time to get the revised bill through the Legislature this session. He said he sees work continuing on the bill over the summer for submission in the 2022 session.

“Our office will follow the proposal as it moves through the Legislative process,” Jason Maulucci, the governor’s press secretary said Friday in an email. “When the governor returned previous legislation without his signature on the matter, he offered support for a bipartisan path forward, which would have addressed his concerns, and achieved the primary objectives of the initiative without costing Vermonters’ jobs.”