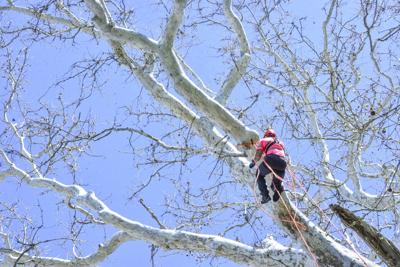 TOWNSHEND — Those warm spring Vermont days hearken back to childhood memories of climbing up a tree, going higher and higher, testing your limits. Brandon Dobnick, a resident of Stamford, Vt., holds onto those feelings as he competes professionally as a tree climber.

While Dobnick puts his gear on and preps to climb Vermont’s largest American Sycamore tree, located at The Harmonyville Store, he talks about his career in climbing trees and some of the challenges involved. He practiced his climbing skills in Townshend as he prepared for a summer of competitions.

“Not only am I a professional arborist, but I also climb trees for fun or for competition. I’ve competed all over the nation,” Dobnick said. “We’ve got the Connecticut competition this weekend (May 14) — that’s in Stratton, and then next weekend I’ll be going out to Illinois, to my hometown, Chicago, to compete there. Then in the middle of June is the New England competition.”

Dobnick said that the region of the competition determines which type of tree he will have to climb. In the Midwest he would be climbing red oak trees, and in New England it would be the white oak tree.

“My favorite tree to climb is definitely a white oak,” said Dobnick. “That would probably be the hardiest as well as the probably widest spreading oak trees that we have in the region. They have great structure. They have great maneuverability, they have opened canopies.”

Dobnick said there are five preliminary events in a climbing competition, including “throw line,” which is basically the installation of a rope in the tree. There are targets and points and heightened difficulty. Then there are a couple speed events.

“There’s a belay speed climb, which is basically you climbing the tree with a fall arrest device; it’s basically like how you would, as a little kid, just climb the tree as fast as you can to about 60 feet to 70 feet depending on the tree,” said Dobnick while starting his assent up the Sycamore tree.

Counting down from 10, doing almost a bicycle kick, Dobnick races up a tree faster than most people could do a 100-yard dash on a track. With his agility he navigates through the limbs of the tree. Dobnick added that one of his favorite sections of the competition, and also one of the more important skills, is performing aerial rescues.

“There’s a hypothetical accident that’s happened and you have approximately five or six minutes to bring down the dummy safely and also release him into the emergency response personnel that are on the grounds,” said Dobnick.