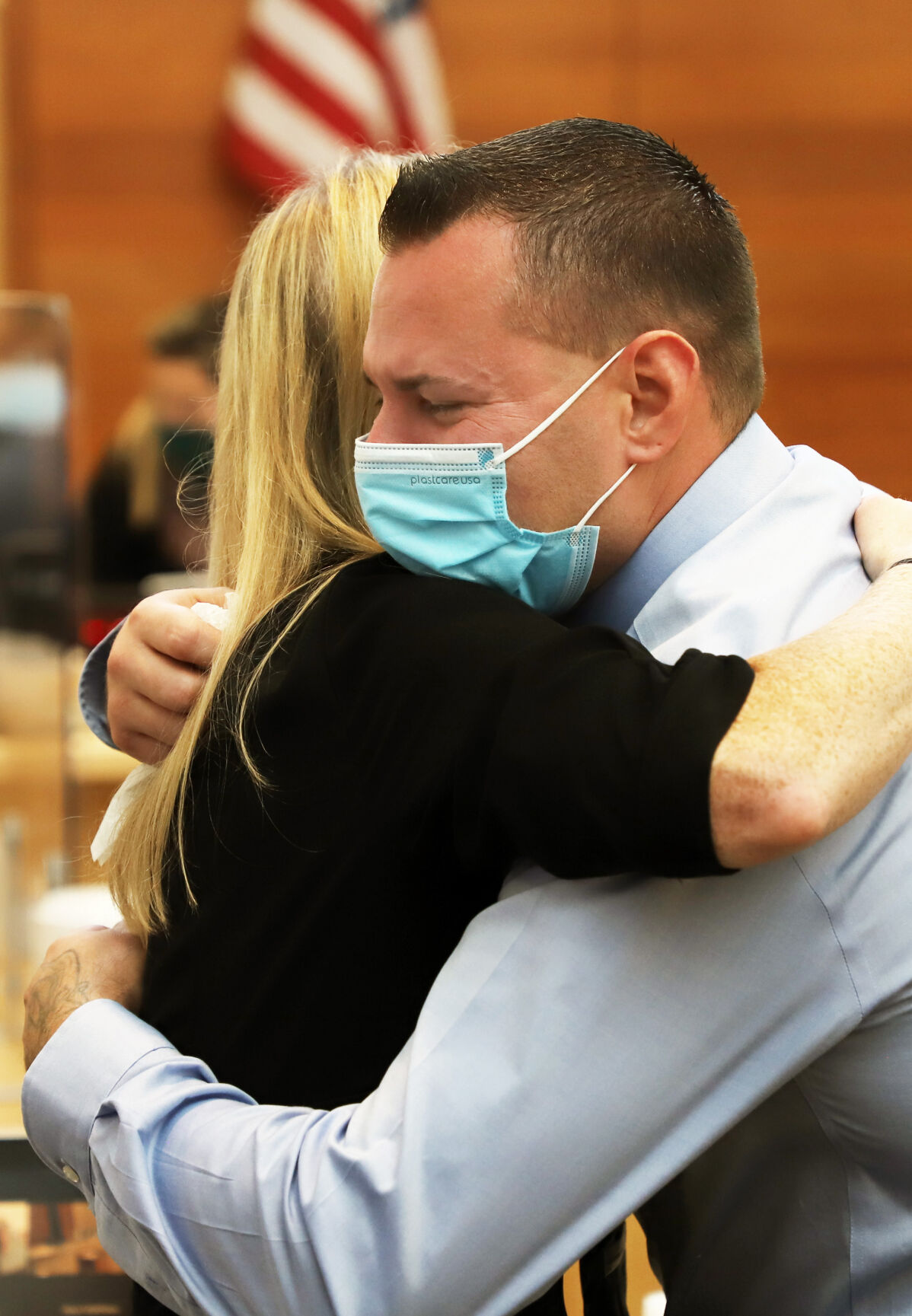 Robert J. Billington hugs Defense Attorney Susan McManus after a jury found him not guilty in a sexual abuse case in Bennington Vermont. 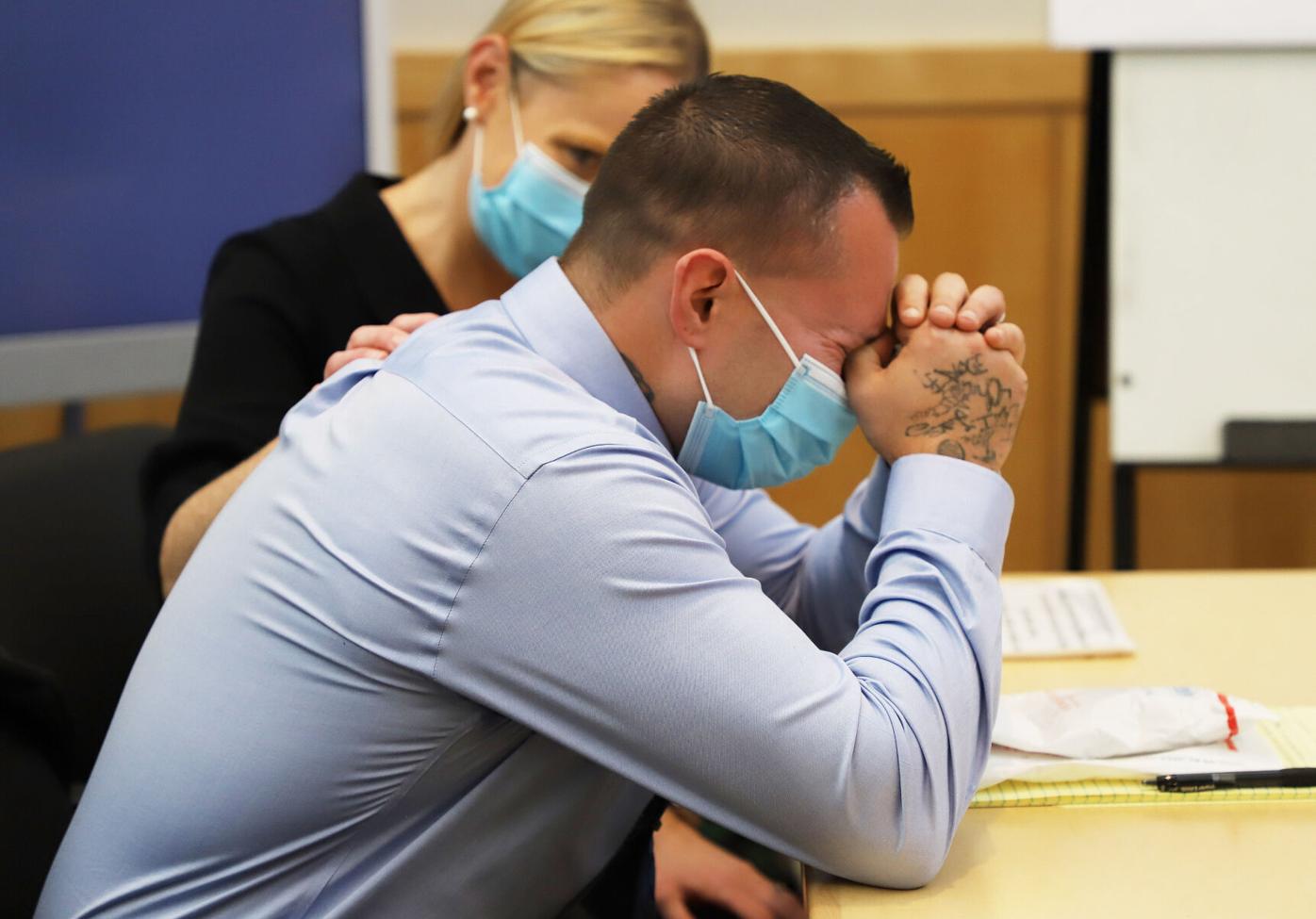 Robert J. Billington is consoled by Defense Attorney Susan McManus after Billington hears a jury declare him not guilty in a sexual abuse case dating back to 2018.

Robert J. Billington hugs Defense Attorney Susan McManus after a jury found him not guilty in a sexual abuse case in Bennington Vermont.

Robert J. Billington is consoled by Defense Attorney Susan McManus after Billington hears a jury declare him not guilty in a sexual abuse case dating back to 2018.

BENNINGTON — Robert J. Billington was found not guilty Wednesday of a single charge of sexual abuse without consent by a unanimous jury of eight women and four men at the Bennington Superior Court after just 90 minutes of deliberation.

It was the second try for a conviction by prosecutors after the alleged 2018 incident, with the first trial ending in a hung jury in 2019. Prosecutors then added an “aggravated” element to the sexual abuse charge, arguing that Billington never told the victim that he was HIV-positive, even after she asked multiple times. In 2020, the Vermont Supreme Court threw out the new charge, rejecting the argument that lying about one’s HIV status could be used to show probable cause in seeking aggravated sexual abuse charges. Prosecutors later re-charged Billington with the original version of sexual abuse, leading to today’s trial.

The jury forewoman, speaking Wednesday in a strong voice, stated, “not guilty,” when asked by Superior Court Judge Cortland Corsones for the verdict. Earlier in the day, Corsones removed a second charge of lewd and lascivious behavior, a misdemeanor, from the charges he gave the jury because of double jeopardy concerns. The single charge of sexual abuse, a felony under Vermont State law, carried the possibility of a minimum of not less than three years to life in prison and, in addition, not more than a $25,000 fine.

Billington hunched his shoulders and dropped his head forward upon hearing the verdict, and audible sobs could be heard from the defense table as his lawyers wrapped their arms around him from both sides.

Billington met the alleged victim at a Narcotics Anonymous meeting in Bennington in 2018. At some point that fall, Billington became homeless, and the alleged victim invited Billington to stay with her and her young children on the couch of her rented trailer in Pownal. The prosecution had alleged that Billington soon became “grabby” with the victim, putting his hands on her hips and asking for kisses. Eventually, the two had intercourse on two separate occasions leading to a third incident from which the sexual abuse charge emanated.

During the trial, there was some question about whether the intercourse the first two times was consensual, as both the prosecutor in the case, Alexander Burke, in his opening statement and in the alleged victim’s statements to police after the incident stated. The alleged victim maintained in testimony throughout the trial that all of the sexual encounters between Billington and her were non-consensual, contradicting her own sworn statements to police in prior comments, as well as Burke’s claim at the beginning of the trial.

The sexual abuse charge without consent stemmed from a third incident between the two. It was alleged that in that third instance, Billington forced the victim to perform a sex act without her consent, with her children sleeping in the next room.

During his closing argument, Burke reiterated that during the third and final encounter with Billington, the victim at all times said no, that Billington forced himself on her and pressured her to comply. Burke told the jury that if they believed this happened and that they believed she said no, “you must find the defendant guilty.”

During her closing argument, lead Defense Attorney Kate Lamson hammered away at the inconsistencies between the alleged victim’s testimony at the trial and the statements she made under oath to police, both written and oral.

“The witness is unreliable,” Lamson said, again and again. “There is no physical evidence here. In order to convict, you need to believe her. I ask, how can you believe her when time and time again she gave you a different story than she gave investigators?”

The jury received the case at 10:53 a.m. but came back just 28 minutes later with a request for the written statement the alleged victim wrote in her own hand to police. Judge Corsones explained that the actual written statement was not part of the evidence but that what she said in the statement was. The jury filed back in, then sent word about an hour later that they had reached a unanimous verdict.

Earlier in the day, Corsones ruled on the admissibility of a document the alleged victim signed days after the third incident occurred, a residential form stating Billington could remain in her residence until further options were available. In courtroom testimony, the victim claimed that she’d never seen the form and did not sign it. Lamson asked that she submit three signatures for the jury to compare and a fourth signature on her original statement to police. Corsones ruled that the jury could compare the signatures already verified on the police statement and the three signatures the victim signed in front of the jury to the debated signature on the residential form. If they felt the signatures matched, they could use the residential form as evidence of the state of mind of the victim days after the alleged abuse took place.

“It’s been two years and 11 months I’ve been away from my kids. Words can’t describe how I feel right now,” said an emotional Billington after the jury found him not guilty. “I’m overwhelmed. The torture is finally over.” When asked what happens next, Billington responded, “Getting back home and being a father, all the things I missed out on these past three years. I just want to go on with my life.”

Lamson stated, “Justice has been done. Robert has waited a long time. We are very pleased with the verdict.”

Co-Defense Attorney Susan McManus added, “We are very glad the jury carefully considered the testimony and came back with the verdict we believed in all along.”

When reached by the Banner, Burke commented, “We are disappointed in the result, but we respect the decision of the jury.” When asked if this is the end, Burke responded, “This case is now over.”