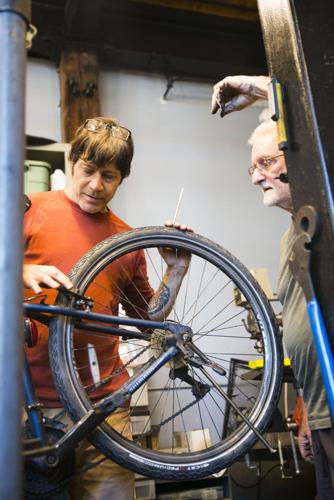 John Gadbois, a bike technician at the Bennington Bike Hub in Bennington, works with volunteer Gary Lambert, completing a tune-up. 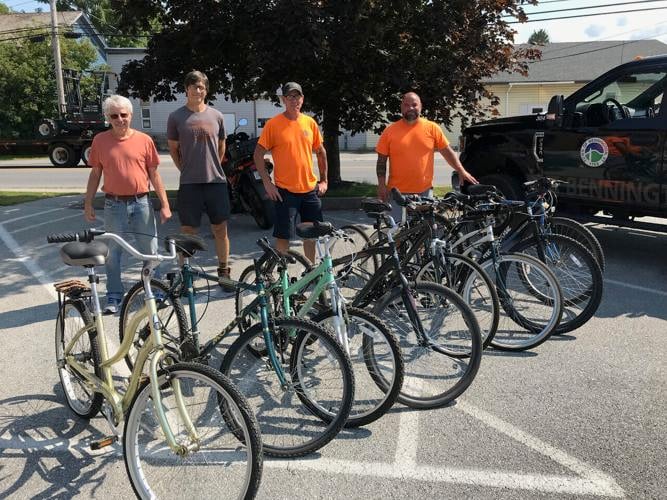 Al Bashevkin and John Gadbois, from the Bike Hub, left, stand with Steve Langlois and Dan Cornell from the Bennington Buildings and Grounds crew after unloading the community bikes at their new home at the Bike Hub shop. The town and the Bike Hub nonprofit group are working to revive a dormant program that provided loaned bicycles at no cost to visitors to the downtown.

John Gadbois, a bike technician at the Bennington Bike Hub in Bennington, works with volunteer Gary Lambert, completing a tune-up.

Al Bashevkin and John Gadbois, from the Bike Hub, left, stand with Steve Langlois and Dan Cornell from the Bennington Buildings and Grounds crew after unloading the community bikes at their new home at the Bike Hub shop. The town and the Bike Hub nonprofit group are working to revive a dormant program that provided loaned bicycles at no cost to visitors to the downtown.

BENNINGTON — A community bicycle program that went dormant during the COVID-19 pandemic may be getting back on two wheels.

The town and the Bennington Bike Hub, a nonprofit bike group, have signed a memorandum of understanding to transfer ownership and management of eight community bicycles from the town to the Bike Hub, which operates a shop at 160 Benmont Ave.

Town Communications Coordinator Jonah Spivak said a community bike program was initially the idea of Steve Hinchliffe, past owner of the former Nature’s Closet shop here. The program made bikes available at no cost at participating businesses throughout Bennington.

“The thought was to primarily service thru-hikers [hiking the Appalachian and Long trails], visiting town and needing transportation,” Spivak said, but the bikes were available to anyone who wanted to borrow one.

After Nature’s Closet moved to Williamstown, Mass., the program was run by the Better Bennington Corporation, which stored and signed out the bikes from the Downtown Welcome Center.

The pandemic then intervened and the bikes went into storage, where they have remained unused for the past two to three years, Spivak said. With the formation of the nonprofit Bike Hub earlier this year, and in support of the designation of Bennington as an Appalachian Trail Community, the town saw an opportunity to resurrect the program, he said.

On Sept. 9, the town delivered eight bikes from the former community bike program to the Bike Hub.

John Gadbois, one of the Bike Hub mechanics, was on hand, along with Bike Hub board President Al Bashevkin, to meet Dan Cornell and Steve Langlois from the town Buildings and Grounds team, which delivered the bikes.

Gadbois has experience with a similar community bike program focused on thru-hikers that he currently operates in Cheshire, Mass.

“We’ll start by doing some needed maintenance on the bikes,” Gadbois said. “We expect to start having bikes available in the spring.”

The bikes will be marked by painted forks and stays to make them more identifiable as community bikes. To start, the bikes will be available at the Bike Hub shop during the regular hours, Thursday through Saturday, from 10 a.m. to 6 p.m.

“We’ll be looking for additional sites and volunteers to make the bikes available for pickup and drop-off at additional hours,” Gadbois said.

The bikes will be available at no cost.

Chris Callahan, vice president of the Bike Hub group, added, “We would hope to have more than eight bikes available this spring. This is fueled by our [bike] donation program, which is going gangbusters.”

In addition to managing the community bike program, the Bike Hub is committed to increasing bicycle use overall and providing low-cost bikes for everyone who wants one.

The stated mission of the group is to promote healthy lifestyles, empower youth through building skills, confidence and independence; to make cycling accessible and safer for all; to build a strong cycling culture and community; and to encourage the use of bicycles for transportation as well as fun, fitness and adventure.

Planning for the Bike Hub was in the works for a while, members said, but really took off this past summer with the purchase of the assets at the former Highlander Bicycle shop at 160 Benmont Ave. in August.

More information about the group is available on the website ourbikehub.com.

“The Hub has been busy!” said Hall, who works at the shop. “We are doing lots of repairs, and we have a lot of interest in our refurbished bikes.”

The refurbished bikes, often selling for just around $100, are of good quality and are a way to get people on bikes at low cost, he said. Used bikes can be donated to the Hub and are tax deductible.

Donated bikes are worked on by volunteers, some of whom are just learning repair skills with help from Bike Hub staff. The bikes get a final review by one of the lead mechanics and will then either be put up for sale at a reasonable price or will be “released into the wild” — to join the initial fleet of community bikes.

The focus on low-cost bikes and running the community bike program fit into the overall mission of increasing bike use and introducing youth, and people in general, to biking, group members said. The goal is to encourage people so that they develop the passion of riding on two wheels that can last a lifetime.

Biking also is a viable alternative mode of transportation, which is good for the environment and for encouraging communities to develop more bicycle-friendly infrastructure in the future.