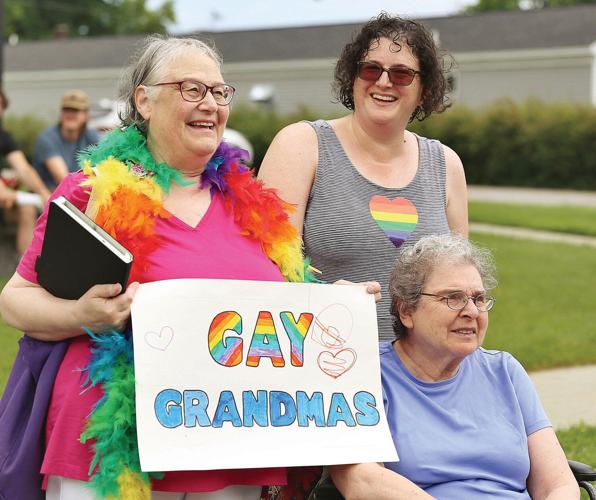 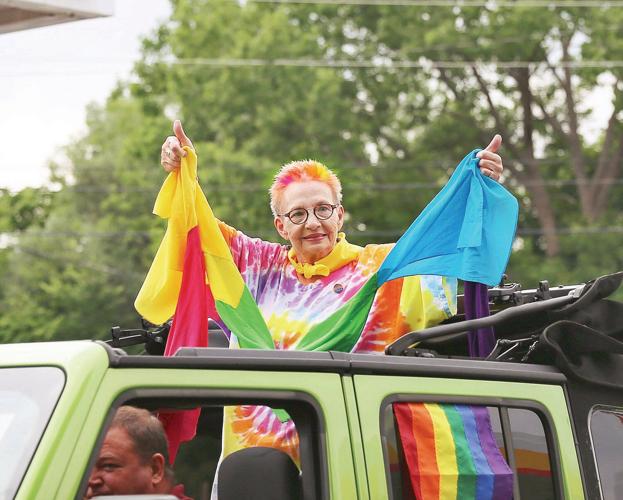 Debbie Bein of Poughkeepsie, N.Y., displays rainbow flags and rainbow died hair as she rides during the first Bennington Pride Parade in 2019. 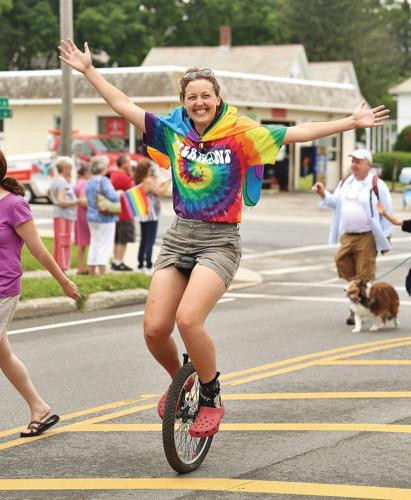 Pi Campbell of Bennington rides her unicycle with pride during the first Bennington Pride Parade in 2019.

Debbie Bein of Poughkeepsie, N.Y., displays rainbow flags and rainbow died hair as she rides during the first Bennington Pride Parade in 2019.

Pi Campbell of Bennington rides her unicycle with pride during the first Bennington Pride Parade in 2019.

BENNINGTON — The Pride Parade and Block Party is coming back to Bennington after a two-year COVID hiatus.

The pride parade will make its way down Main Street on Sunday, starting at 11 a.m. at the Bennington Museum. It will end with a Block Party at the Splash Pad on Pleasant and School streets.

The Block Party will host about 32 vendors, drag performers, food trucks, music and other activities, including 30-minute paint parties with local artist Peggy Younger. Vendors will close up shop around 5 p.m.

Jess Bouchard from Bennington is the interim director and board president at Queer Connect. She is also a teacher, guidance counselor and mother of two. Bouchard and her team have been instrumental in the planning of Bennington Pride.

Bouchard hopes that this event proves to members of the LGBTQIA+ community that there are allies among them.

“Our hope is for our community to feel accepted,” she said.

This event is publicized as a family friendly event, and Bouchard confirmed that children are welcome — even encouraged — to attend. She said it’s an opportunity for children to see adult role models from the community and allies.

“I’m an educator, and I believe in visibility,” she said. “We can’t create community without having our children feel accepted. A large number of our LGBTQIA community are youth and children.”

Bouchard also has asked the performers to make their music appropriate for children.

“We imagine that some of the songs might be inviting for children to want to dance,” she said. Some of the performers also will be wearing fun and beautiful clothing.

One of the drag performers is a former student of Bouchard.

“A couple of the performers did performances with us at our Drag Bingo last August for our fundraiser at the Park McCullough, and yeah, they’re fantastic,” she said.

This year, there have been hate crimes against the LGBTQIA+ community in the headlines. Most recently, a U-Haul full of 31 white supremacists was stopped outside of a Pride event in Idaho, and a transgender woman, Fern Feather, was killed in Morristown in April.

Bouchard said she understands that having an event like this can be “controversial, which we don’t understand why that is.” Because it can be a polarizing event, Queer Connect has been working with the Police Department, she said.

Last year, LGBTQIA+ community members voiced concerns about having a police presence at Pride, worried over police reaction, like with the 1969 Stonewall riots in Greenwich Village. Bouchard said people she spoke with had their own concerns with the Bennington Police Department, too.

Because of this, she approached the Police Department with the concerns and said she’s been helping the department “find resources and training, so that they can be more affirming in the community.”

She also said the Bennington Police “believe in our mission and they believe in helping us have a safe event.”

“We really care about making people feel seen and giving them a sense of belonging, and we cannot do that without the support of allies,” said Bouchard.