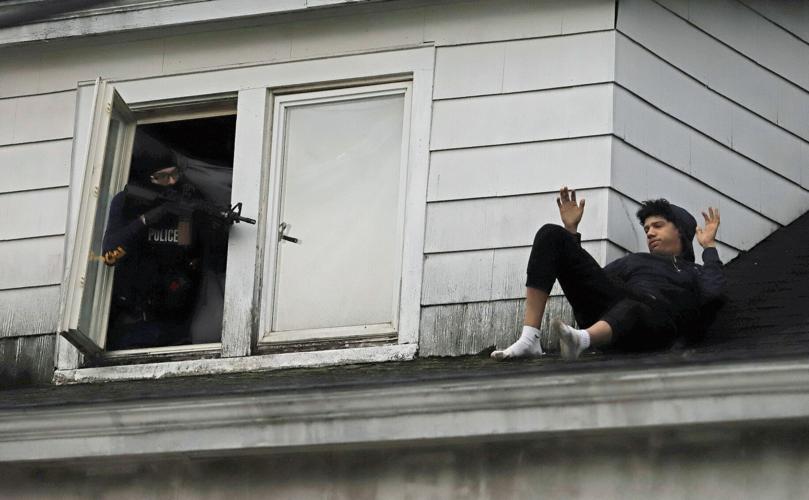 An officer from an assisting agency points his rifle at a suspect at 113 Pratt St. in Bennington during a series of drug raids in April. 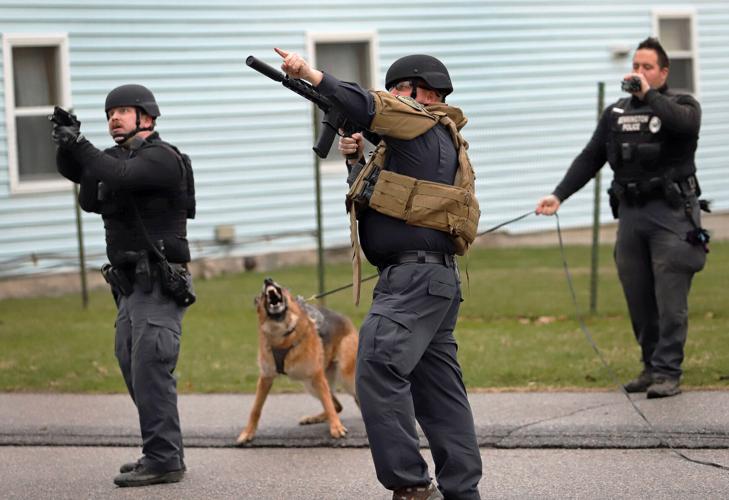 Bennington Police officers, including Chief Paul Doucette, center, take aim at the roof of 113 Pratt St. in Bennington on Thursday. 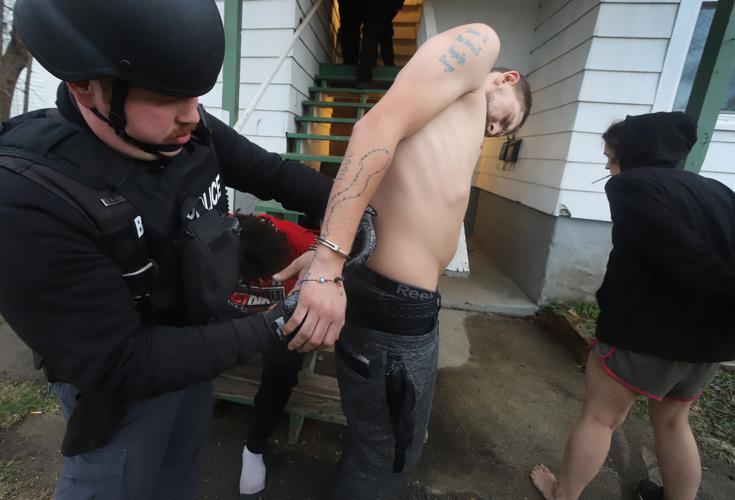 An unidentified suspect is taken into custody at the back of 113 Pratt St. in Bennington as part of a search warrant raid Thursday. 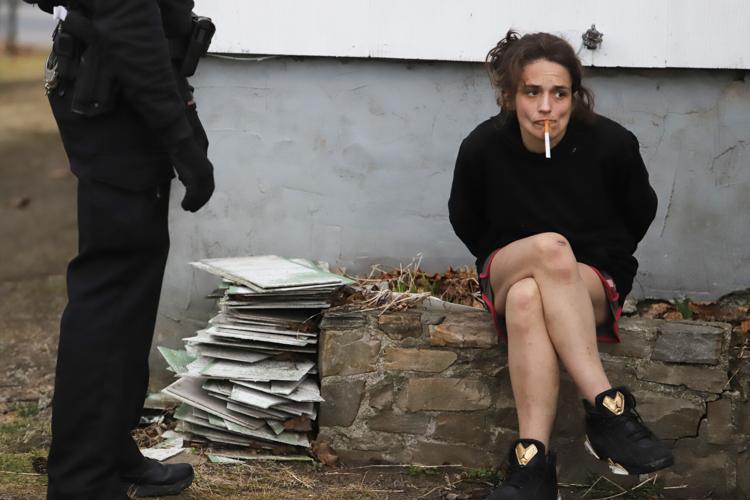 Valerie Phillips sits awaiting transport after being arrested at 113 Pratt St. in Bennington 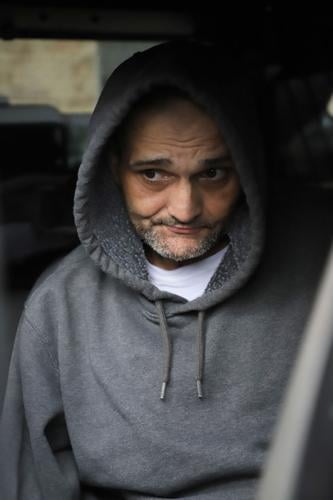 Richard Winnie sits in police cruiser after being arrested on drug charges by Bennington Police at 450 Main St. in early morning raid.

An officer from an assisting agency points his rifle at a suspect at 113 Pratt St. in Bennington during a series of drug raids in April.

Bennington Police officers, including Chief Paul Doucette, center, take aim at the roof of 113 Pratt St. in Bennington on Thursday.

An unidentified suspect is taken into custody at the back of 113 Pratt St. in Bennington as part of a search warrant raid Thursday.

Valerie Phillips sits awaiting transport after being arrested at 113 Pratt St. in Bennington

Richard Winnie sits in police cruiser after being arrested on drug charges by Bennington Police at 450 Main St. in early morning raid.

All three were known drug locations in the downtown Bennington area, with possible ties to whom an official called a “ringleader” from Springfield, Mass. That man, John Pena Baez, 18, was arrested on drug trafficking and firearm charges after a traffic stop in Bennington on Wednesday and is being held until his arraignment. His arrest helped lead to the raids Thursday, police said.

All told, over 500 bags of fentanyl, a loaded firearm, ammunition and various drug paraphernalia were seized during the execution of Thursday’s three search warrants.

Arrested were Jacob Lundy, Valerie Phillips and Richard Winnie, as well as four others who would not identify themselves to police. Charges include fentanyl possession, fentanyl trafficking, conspiracy to sell narcotics and possession of illegal firearms.

How the raids unfolded

Around 6:45 a.m., as police rammed in the back door after announcing their presence, two suspects broke through a dormer window on the second floor at a Pratt Street location and fled onto the roof.

Gracie, the Bennington Police dog, alerted the officers to the suspects on the roof, and a team made up of multiple law enforcement agencies confronted them there. An officer with a high-powered firearm pointed his rifle out of the window at the suspects as a group of officers screamed orders at them.

Both were captured and later loaded into police vehicles with the other suspects.

Some of the people arrested have refused to cooperate with law enforcement by not giving their names or allowing police to fingerprint them.

Bennington Police were able to identify three of the suspects. Two of them were Lundy and Phillips. Both were arrested at 113 Pratt St., Apt. 3, where a total of six people were arrested.

Police have been receiving information for several months from neighbors about the Pratt Street apartment leased by suspect Amber Chapman.

“The information we have is that Amber Chapman has been allowing people to come to her apartment for the sale of narcotics, a lot of traffic, people coming and going all hours of the day and night. We have previously responded to that apartment for an overdose of fentanyl,” said Doucette. “Due to the individual arrested by federal authorities last night, we were able to secure a search warrant for the residence and execute the search warrant this morning. We do believe that this residence is connected to him.”

Police found a loaded semi-automatic pistol on the bedroom floor where the window had been broken. They also found ammunition on one of the suspects, on the ground and in a pouch on the side of the house.

Winnie was arrested at the second location, at 450 Main St. Police targeted that location after neighbors and nearby businesses complained to authorities about suspected drug activity at Winnie’s leased apartment.

“We have been receiving reports of Mr. Winnie dealing narcotics from his home, typically heroin and fentanyl, for some time,” said Doucette. “We have been watching Mr. Winnie’s residence, and, as a result, we did a controlled fentanyl purchase there from Mr. Winnie, as well as another apartment in the same building. We were given a search warrant for his residence, and he was ultimately arrested for the sale of fentanyl, and possible other charges are pending.”

Neighbor Katelyn Senecal, who shares a hallway with Winnie, said he’s lived there since 2020, and that she’s observed suspicious activity ever since.

“ There’s fights and physical violence, partying until 3 or 4 in the morning. I’ve told him so many times that this is going to happen. I’m so grateful it did. Thank you, Bennington Police Department,” Senecal said.

Officers had a search warrant for a second residence at 450 Main St., but that individual was not at home during the execution.

“The individual that we were looking for, that we have bought narcotics from, was not there, but we are hoping he gets the message and turns himself in,” Doucette said.

“The Vermont State Police assisted us after the arrests,” Bennington Police Lt. Camillo Grande added, “and we thank them, as well as State’s Attorney Erica Marthage and her team, who have been working with us all day to review charges and to make sure that we have a successful prosecution on these charges. It takes a lot of resources and a lot of time these arrests.”

Grande said these kinds of investigations take many hours of good police work and help from the community to be successful.

“We know there are other areas of concern out there. We are trying to identify them and bring cases as we move forward to make the community safe,” Grande said.

When asked about the state of Bennington right now, Chief Doucette looked ahead to how the community can finally turn the corner.

“I think there’s a lot of positive things happening here in Bennington. These last three-to-five months have been a challenge for law enforcement for many reasons, staffing issues, the big jump in opiate and overdose deaths, not only here but across New England and the whole country. We need to find a way to slow down the opiate and heroin trade,” said Doucette. “The positive is we are seeing a lot more cooperation and coordination between federal, state and local authorities right now. Ultimately, that’s how we are going to solve this.”

Doucette said the arrests represent only one small aspect of life here in town.

“This is just one side of Bennington. We want people to come here. We want them to establish residences here, and we want them to feel safe here,” Doucette said.

None of the suspects had been arraigned as of press time.

BENNINGTON — A 17-year-old Massachusetts youth was arraigned Thursday for kidnapping and assault and robbery with a weapon.