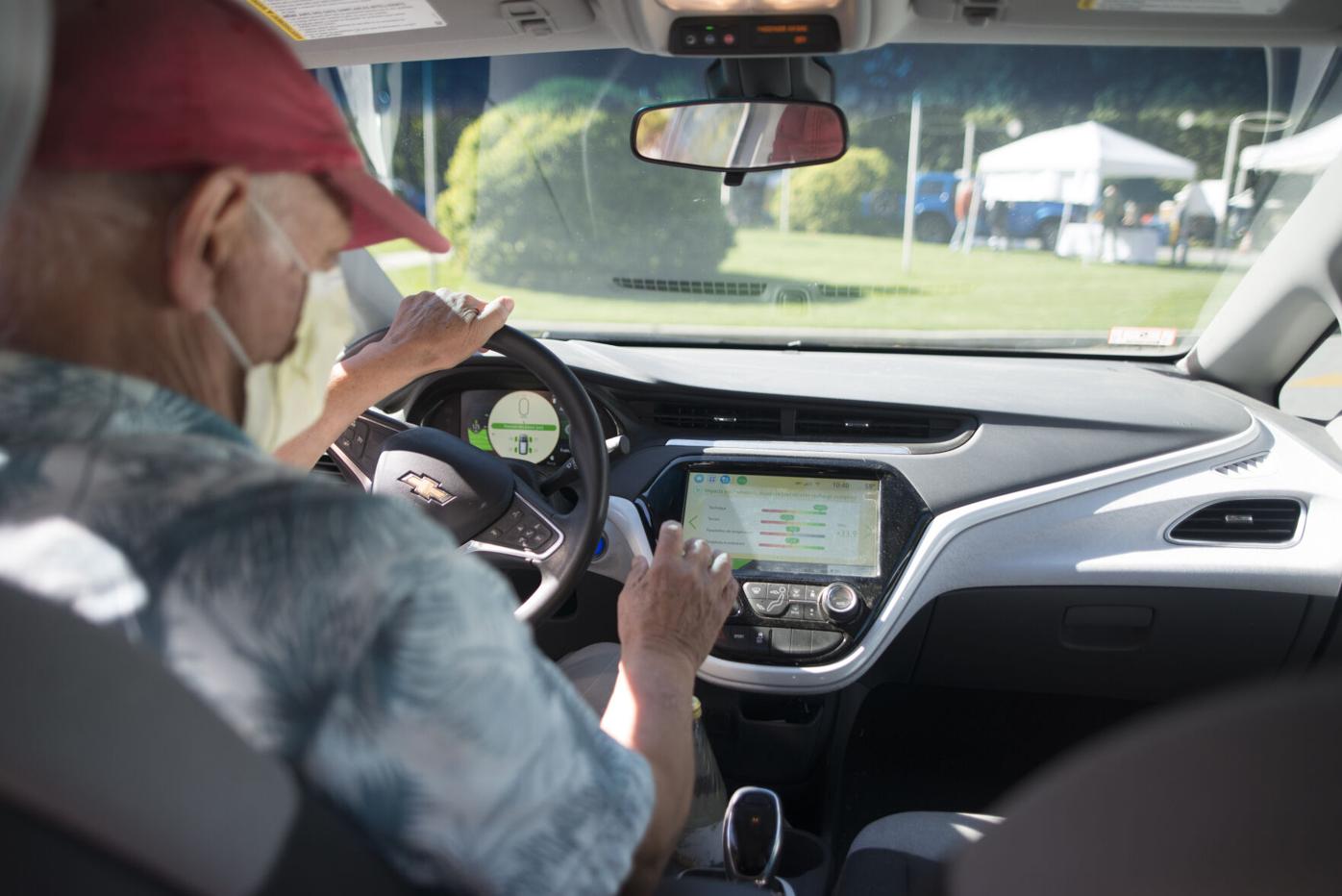 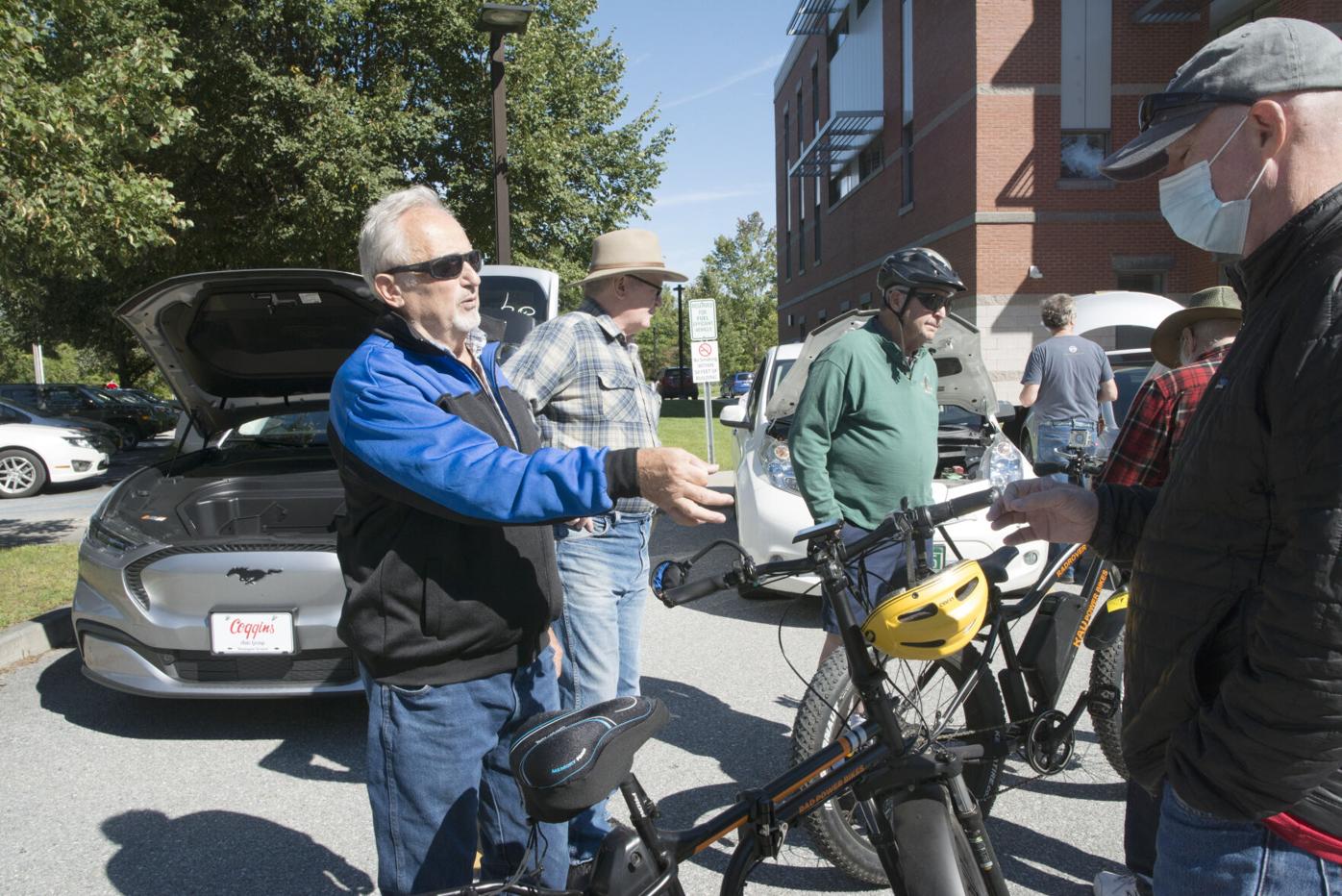 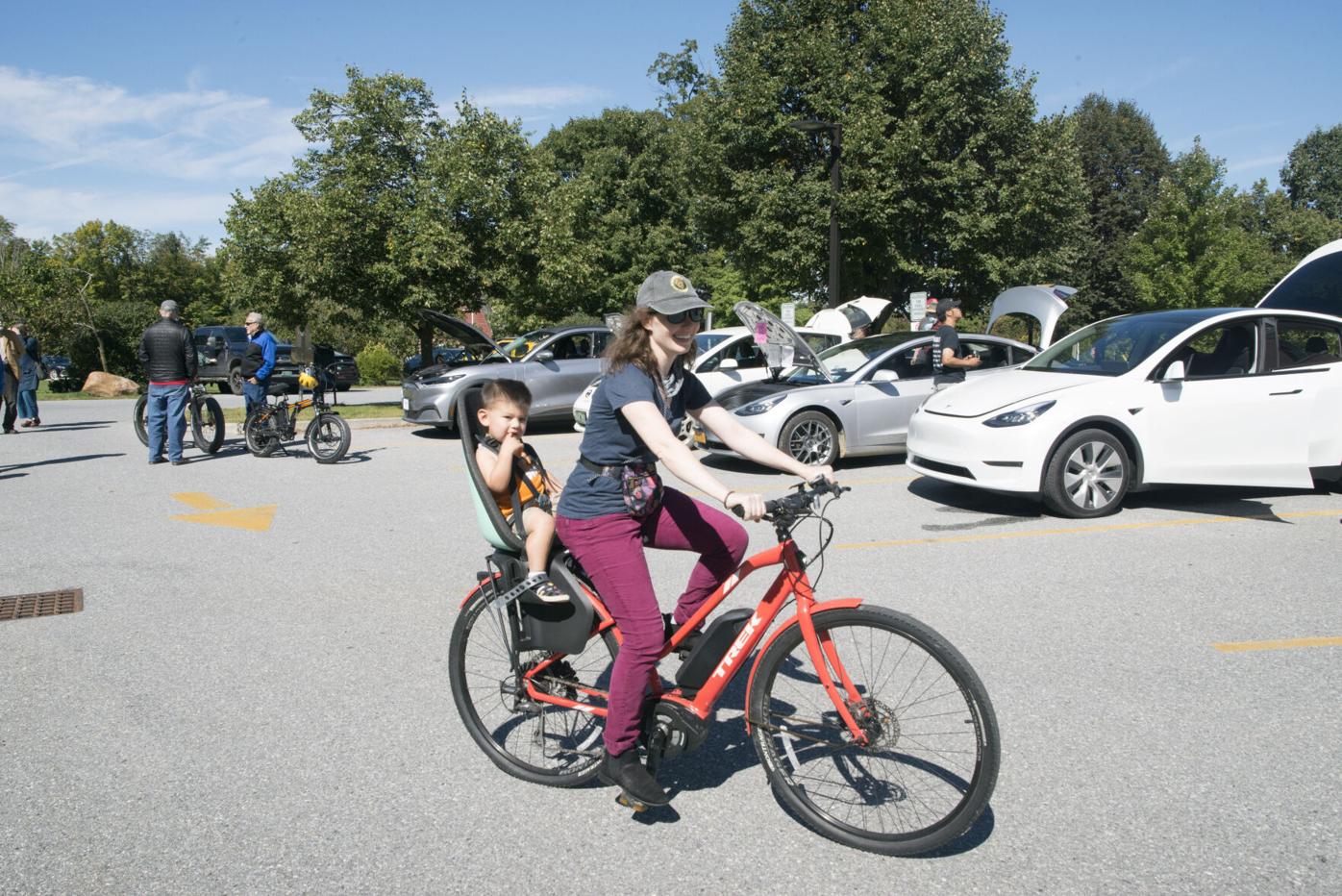 BENNINGTON — Three or four trips to the gas station a year? That’s all?

Car owners on Saturday parked their various vehicles — Teslas, Nissan Leafs, Toyota Prius Primes, Chevy Bolts — in the Bennington District Court parking lot, where those visiting the nextdoor Bennington Farmers Market wandered over to browse cars, inside and out.

This year marked a return of the event after a hiatus because of COVID-19; it was organized by Callie Fishburn, regional planner and energy program coordinator for the BCRC. Fishburn linked up with the National Drive Electric Week group, which sent a ton of free gifts to be handed out: T-shirts, metal water bottles, face masks and tote bags.

Sullivan told the Banner that he owns a Nissan Leaf and his wife has a Toyota Prius Prime. With his car, he only makes three or four trip to the gas station every year.

Charge it at home instead

“Honestly, people have to shift their way of thinking — you fuel your car at home now, instead of always having to go to a gas station,” said Sullivan.

As for people who don’t own a home, such as apartment renters, Sullivan said: “That’s a big thing. Not everybody has a garage.”

As such, it’s important to place chargers in public, accessible locations such as multifamily and apartment buildings, employment centers, workplace settings and schools, he said.

“It’s an equity thing, too,” Sullivan said. “With the car incentives, it can be some of the least expensive cars. You don’t have maintenance concerns, and they’re a lot cheaper to operate. But if you can’t charge them, they’re useless. Folks need to have that charging infrastructure.”

Sullivan believes there will be even more incentives to come. State and local groups working on the ongoing Vermont’s Comprehensive Energy Plan and Climate Action Plan are well-aware of the effects of the transportation sector on greenhouse gas emissions, he noted.

“To make the impact we’d like to make, we’ve got to transition our light-duty vehicle fleet. How do you do it? You make it affordable.”

Kirke McVay, a proud owner of a Nissan Leaf showed off his car while wearing his matching Nissan Leaf T-shirt. McVay, a psychologist and hypnotist for 20-plus years, said there are many perks to owning an electric vehicle, but noted it’s an “around-town car.”

“The thing is, from here to Shaftsbury where we live, it’s mostly uphill. You have to take elevation into consideration. Elevation makes a huge difference; it really soaks up the battery going uphill,” said McVay.

He noted that his wife has a Toyota Prius Prime, which they take with them on longer trips.

Bill Ashley, a resident of Greenfield, Mass., brought along his 2019 Chevy Bolt to the electric car show.

The display screen in his car’s interior provides him with a detailed analysis for his driving performance.

“As you drive, you get points, depending how you drive. My technique has gotten me extra brownie points. When you finish charging it up, the car automatically clears all those markers and gives you a grade. You have to learn to get along with your car,” said Ashley.

In the show were plenty of electric bikes. Cat Bryars and her son, Alfie, took a ride through the crowd on their Trek Verve-plus. Bryars, director of planning with the BCRC, said her son loves biking around town.

“He’ll go and bring me his helmet and try to get me to take him out on it,” she said.