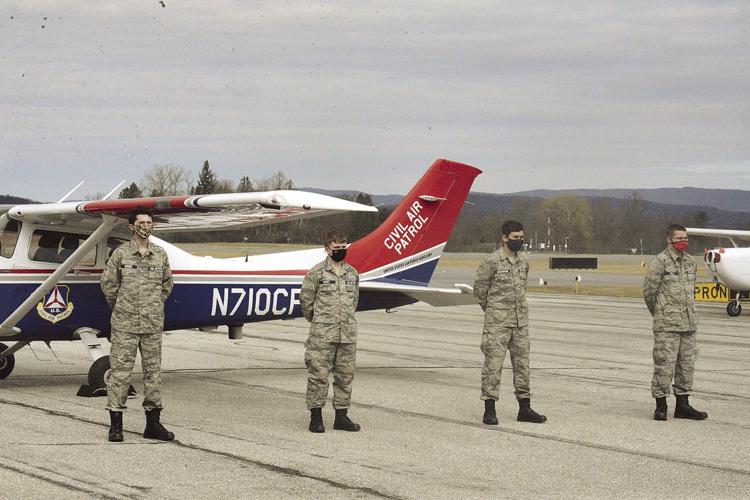 Bennington CAP cadets pose in front of an airplane on the Bennington Airport runway Saturday morning. 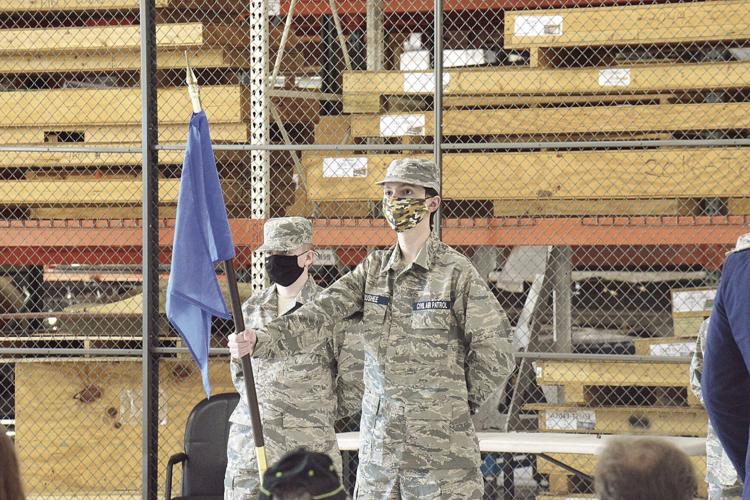 Seven cadets were sworn into the Bennington Civil Air Patrol on Saturday.

Bennington CAP cadets pose in front of an airplane on the Bennington Airport runway Saturday morning.

Seven cadets were sworn into the Bennington Civil Air Patrol on Saturday.

BENNINGTON — Seven cadets were sworn into the Bennington Squadron of the Vermont Wing of the Civil Air Patrol (CAP) on Saturday.

The ceremony took place within a hangar at the Bennington Airport in front of cadets’ family members and various members of the Vermont Civil Air Patrol.

The Civil Air Patrol serves as a volunteer auxiliary for the United States Air Force. The Vermont Wing “provides search and rescue and disaster relief missions for various agencies” according to its website, vtwg.cap.gov. These missions include rescuing lost/injured hikers and cross country skiers, among others.

The Bennington Squadron has been without cadet members for many years. Bringing them back was a focal point for Capt. Jonathan Mercer. Mercer is happy to see a large number of cadets take interest in the CAP.

“We were worried that we would have one or two cadets,” Mercer said. “Seven (is) just about perfect.”

That number makes the Bennington Squadron one of the largest in the state.

“Their drive to get the cadet program back was incredible,” Director of Cadets Capt. Joseph Bosley said. “It’s absolutely fantastic what Captain Mercer and Captain Friday has done so far. It’s literally been three weeks that they’ve been putting this together and I can’t tell the difference between them and my own squadron at this point.”

“It’s a great number for a core to build around,” said Deputy Commander of Cadets Hal Friday. “I think once they start being seen around the school in uniform, I think that second wave will follow very quickly. I would expect us to be up over 10 probably by the end of next week.”

The return of cadets has been in the works for a few years, according to Friday.

“I’ve been putting it together for a couple of years now,” he said.

Despite this, recruitment began toward the beginning of March.

“To see it all come to a head so quickly and coming together all at once is really wonderful,” Friday said.

“The thing about Civil Air Patrol is that unlike other youth organizations, they can go on real world missions pretty much right away as we get them started on their training. Having the opportunity to genuinely serve as actual members of the Civil Air Patrol is, I think, one of the unique experiences.”

The cadets come from different backgrounds with varying degrees of experience.

There are three different areas within the Civil Air Patrol: search and rescue, ground search, and command structure duties.

Mercer said all of the cadets will work within each avenue to get a wide-range experience and be well versed in each area.

“Some of them joined because they want to fly airplanes, Mercer said. “They will also get hot and dusty and walk around on the ground. They’ll learn how to read a map.”

“When he lived on Long Island, he used to be a part of Civil Air Patrol,” Kaufer said. “And he’s since passed and I thought it would be a very nice way to honor his legacy. But I also just wanted to do something bigger in my community.”

Aiden Mirchandani heard about the program from a family friend who happens to be an Air Force pilot.

“I’m excited to fly,” Mirchandani said. “It’s something that has been in my family for three or four generations at this point.”

Andrew Marsden heard about the CAP from Friday, who is a social studies teacher at Mount Anthony Union High School. He has enjoyed the first few weeks of his experience with CAP.

“(It’s) great so far,” Marsden said. “I feel like the team is really starting to come together and definitely learning a lot from Captain Friday and Captain Mercer.”