BENNINGTON — The Vermont Attorney General’s Office has asked the court to put a self-described white nationalist on house arrest, saying his latest charges of domestic violence show he “continues to jeopardize public safety” while free from jail.

The attorney general’s office is prosecuting Max Misch, of Bennington, on allegations he illegally possessed large-capacity firearm magazines in 2018. Misch, 38, is seeking to get the misdemeanor charges dismissed.

The Bennington Superior Court has kept him free from jail on conditions, but prosecutors say he has repeatedly violated them. Criminal defendants released on conditions are expected not to be charged with new crimes while their cases are ongoing.

Since Misch’s magazine case was filed in February 2019, however, the state has charged him in six other criminal cases. The latest, which came last week, accuses him of assaulting a woman on two separate occasions in the past half-year. Police said he had choked the woman and re-broken her arm that had been mending.

His two associated felony charges of aggravated domestic assault — each charge punishable by up to 15 years in prison — are his most serious to date. His other charges are misdemeanors.

On Thursday, the attorney general’s office asked the Bennington Superior Court to update Misch’s conditions of release on the magazine case to include round-the-clock home confinement. It cited the interest of public safety.

“Given these repeated violations, the only condition that can protect the public is a 24 hour, 7 days/week, curfew limiting his ability to continue to engage in flagrant, repeated and ongoing criminal behavior,” Assistant Attorney General Ultan Doyle said in a portion of his five-page written motion.

He argued that Misch’s continuing accumulation of charges constitutes “extraordinary circumstances” that warranted home confinement. This, he said, is the least restrictive response to Misch’s behavior — an important factor that the court weighs when deciding whether to detain a defendant. 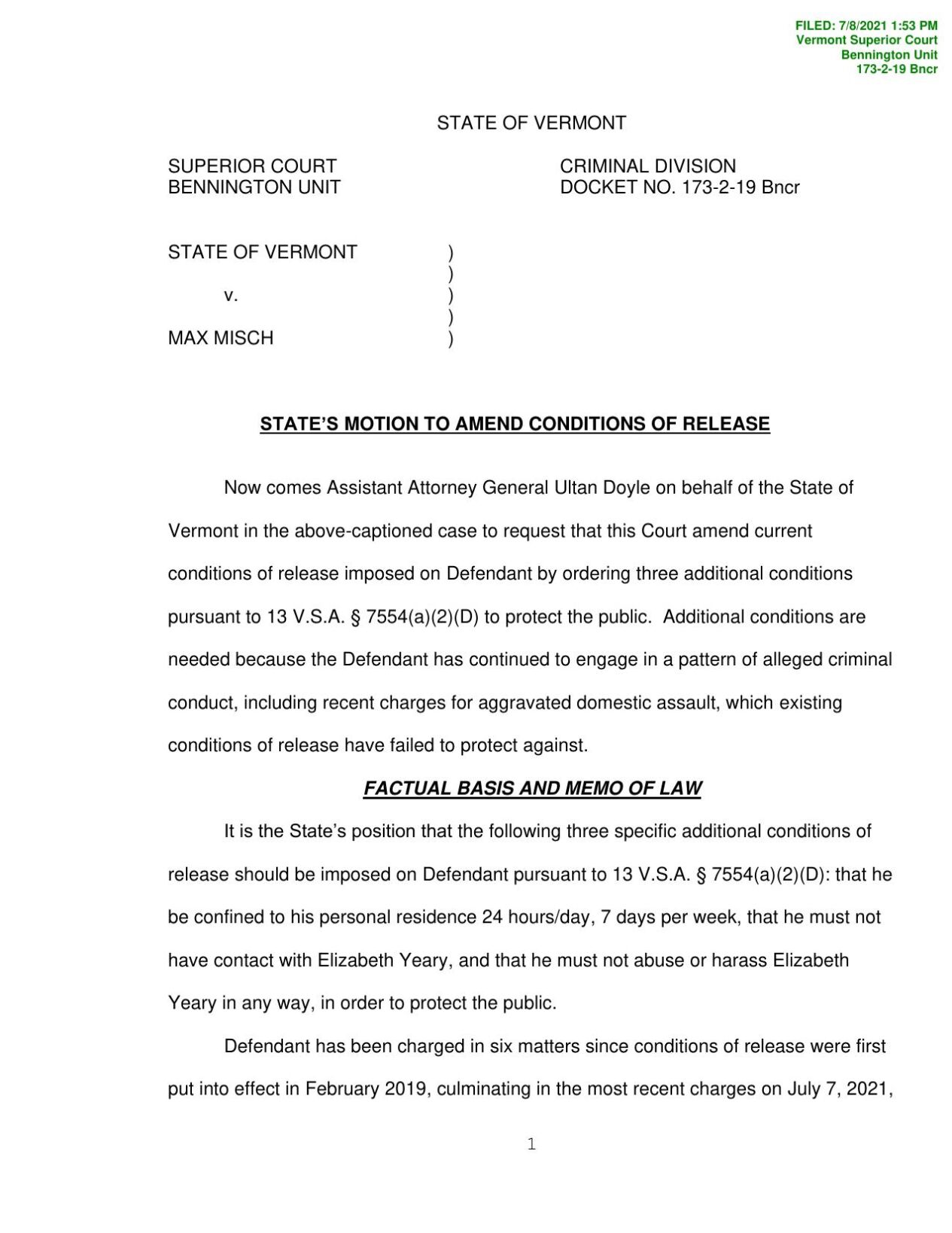 Misch is scheduled to return to court for a status conference on Aug. 23, according to court records. It wasn’t immediately clear if an earlier hearing will be set to discuss the home confinement matter.

The attorney general’s office also asked the court to impose two more conditions: that Misch not have contact with the complainant in the domestic assault case, and that he not abuse or harass her. Similar conditions are currently in place within the case itself, which is being prosecuted by the Bennington County State’s Attorney’s Office.

Misch’s five other pending criminal cases include three that allege violations of release conditions. There are also two accusing him of disorderly conduct last summer: during the painting of Bennington’s Black Lives Matter street mural and in a fight with a Black man in Bennington.

The attorney general’s office announced its request for home confinement in a release on Friday afternoon, saying: “The current conditions of release — which were put in place with the express purpose to protect the public — have been shown to be insufficient as Mr. Misch continues to jeopardize public safety by his flagrant and repeated criminal behavior.”

An Army war veteran who bills himself as a free speech activist, Misch has acknowledged trolling former state Rep. Kiah Morris, who is African American, online and during public events.

Morris, who left her seat amid a campaign for re-election in 2018, filed multiple complaints of racially motivated harassment during that period. But local and state authorities said the incidents did not rise to the level of criminal conduct because of constitutional protections regarding freedom of speech.

Morris has since moved with her family from Bennington to the Burlington area.