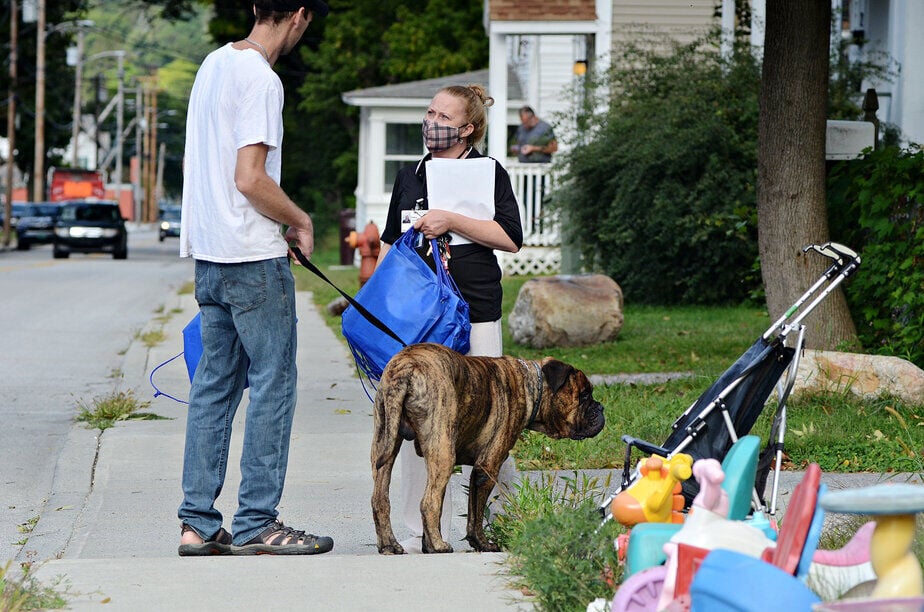 Julea Larsen, a recovery coach at the Turning Point Center of Bennington, talks with a man walking down Pleasant Street in Bennington as she hands out “harm reduction” kits one morning in September, 2020. The kits included Narcan, an antidote for opioid overdose. 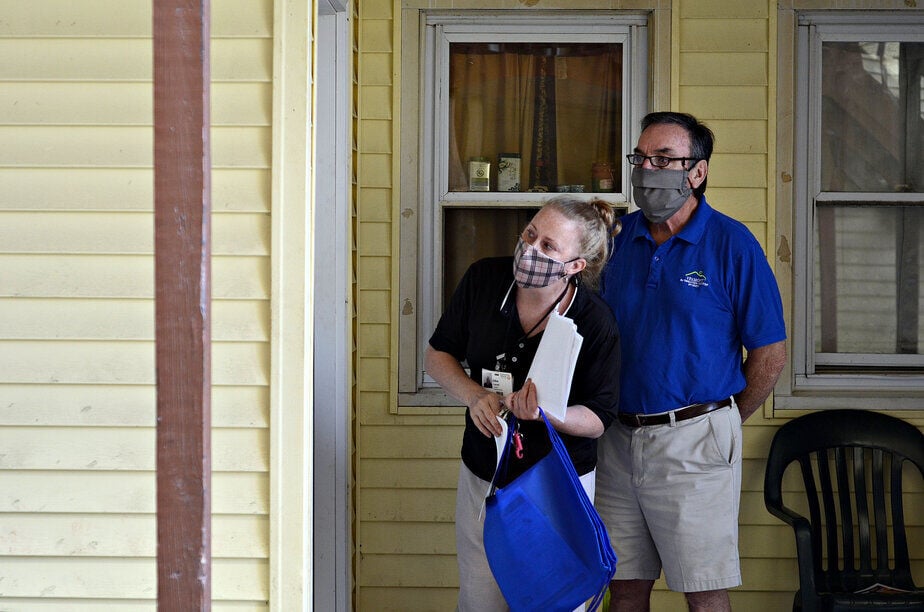 Julea Larsen and Tom Haley, recovery coaches at the Turning Point Center of Bennington, hand out “harm reduction” kits to some apartments on Pleasant Street in Bennington one morning in September, 2020. The kits include naloxone, an antidote for opioid overdose.

Julea Larsen, a recovery coach at the Turning Point Center of Bennington, talks with a man walking down Pleasant Street in Bennington as she hands out “harm reduction” kits one morning in September, 2020. The kits included Narcan, an antidote for opioid overdose.

Julea Larsen and Tom Haley, recovery coaches at the Turning Point Center of Bennington, hand out “harm reduction” kits to some apartments on Pleasant Street in Bennington one morning in September, 2020. The kits include naloxone, an antidote for opioid overdose.

BENNINGTON — In a couple of months, addiction recovery coaches will join the ranks of emergency responders in Bennington. The coaches will back up paramedics or police officers in emergency calls involving substance abuse.

“This is another way to try to reach people as soon as we can,” said Tom Haley, executive director of the local Turning Point recovery center. “It might be in a motel room, it might be in their apartment, it might be under a bridge. Wherever it is, let’s get there as quickly as we can.”

The service — the first of its kind in Bennington County, and possibly the entire state — is scheduled to launch in January. It’s being set up thanks to $44,000 from a larger grant that the Bennington Opioid Response Team recently received from the state health department.

Called the Overdose Outreach Project, the service is expected to fill a crucial need in the area. First responders have apparently expressed frustration at not being able to offer recovery support to a person they’ve just revived with an antidote following an opioid overdose.

“We heard it loud and clear from first responders,” said Kristi Cross, project director at the Bennington Opioid Response Team, “reviving the person with Narcan and then having to leave and not being able to give something to that individual, who in that moment may have been ready for the next step.”

The project’s goal is to have enough recovery coaches to respond to emergencies throughout the county.

In the past decade, accidental fatal overdoses among Bennington County residents peaked at 13 deaths in 2018 — a tenth of the total state count, according to the latest health department data.

The county’s overdose fatalities dipped last year, but it’s been on an upward trend again since the coronavirus pandemic started. Also on the rise, according to the health department, are people who get treated at hospital emergency rooms for nonfatal overdoses.

Recovery coaches on sceneBeginning sometime in January, Turning Point recovery coaches will head to the scene of a substance abuse-related emergency whenever they are called by members of the Bennington Rescue Squad or the Bennington Police Department. The emergency could be a nonfatal drug overdose or, for instance, a domestic violence incident where people were found to be under the influence of alcohol.

Besides offering recovery support, the coaches’ work onsite will include helping de-escalate the situation and looking into social factors that impact substance use. These social factors include housing, food, transportation, community infrastructure and income, said Cross of the Bennington Response Team.

Recovery support after the emergency could come in a variety of ways. There’s recovery coaching, referral to medicated assisted treatment, getting people into therapy, involving them in Alcoholics Anonymous meetings, helping them find a stable job — or a combination of these.

“There are so many elements that collectively constitute a whole, healthy life,” said Haley, of the Turning Point Center of Bennington.

Even if the person who overdosed refuses any recovery support, the plan is for coaches to still discuss with them the importance of such support structures.

The idea behind the project is similar to that of Turning Point’s two-year-old emergency department program at SVMC: meet people who need help at a critical moment in their lives.

“We’re trying to find another way to reach these people as soon as we can,” Haley said. “If you can set more people on their own journey to recovery, that is quite a gift.”

About five of the center’s recovery coaches are certified to participate in the project. Designated coaches will be on call 24/7, and the grant funding will take care of their stipend and gas for travel.

The project’s exact start date has not yet been determined.

‘Unique in Vermont’The project funding comes from $175,000 in federal dollars allocated to help battle drug overdoses in Bennington County. This Community Action Grant, awarded Oct. 26 by the state’s Division of Alcohol & Drug Abuse Programs via the Southwestern Vermont Medical Center, is good for one year. An additional $125,000 is anticipated for the second year.

Rutland, Windham and Windsor counties were also chosen to receive the grant.

The state grant manager believes Bennington County’s plan of deploying recovery coaches to emergency incidents “would be unique in Vermont.”

When asked if the health department would consider replicating this service in other counties, ADAP Substance Abuse Program Manager Roy Belcher said the agency wants to first focus on supporting the project’s implementation and the evaluation of its impact.

Before the end of its first year, the Bennington Opioid Response Team hopes the service can be expanded to other towns in the county. This would entail increasing the number of recovery coaches in the program as well as partnering with more first responder groups.

“We certainly wanna make sure that we expand it,” Cross said, “but we wanna start with a small cohort first and establish a process.”

To guide future government responses to drug overdoses, the grant requires recipients to collect data that would gauge the project’s impact. This would include local first responders’ tracking overdose incidents — a new way of gathering data right in the field.

If the project is successful in decreasing overdoses and substance abuse, organizers are planning to find a way to keep it going after the federal funding ends.

“For sure we’re gonna do everything we can to seek out available resources to make that happen,” Cross said.