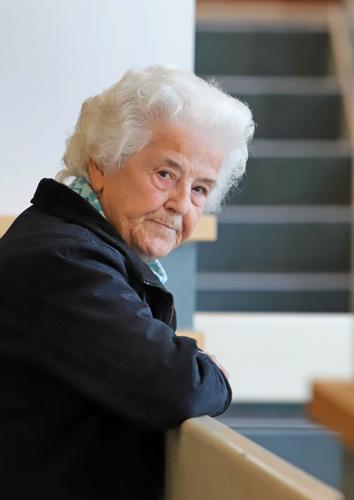 Lucille Morse at the Bennington Courthouse after her sentencing hearing. 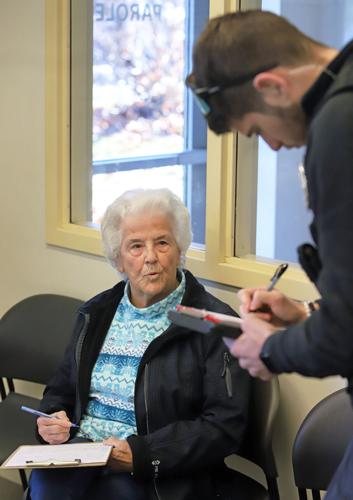 Lucille Morse is handed a citation for violating probation as she fills out paperwork minutes after being sentenced at the Bennington Courthouse.

Lucille Morse at the Bennington Courthouse after her sentencing hearing.

Lucille Morse is handed a citation for violating probation as she fills out paperwork minutes after being sentenced at the Bennington Courthouse.

BENNINGTON — A 78-year-old woman had barely begun her parole Tuesday before she allegedly re-offended and was ordered to return to court in the near future on a new charge.

Lucille Morse, 78, whose sentencing hearing had just ended in Bennington Superior Court made a death threat to the victim, Alijah Lanteigne, the girlfriend of Morse’s grandson, as she walked out of the courtroom. Minutes later, Morse got into a verbal altercation with the victim outside the courthouse, with Morse’s daughter attempting to punch the victim through the window of her car. Police arrived, and a citation was issued to Morse for violating parole, given to her by Bennington Police as she sat filling out her intake parole papers at the courthouse.

The drama began earlier in the day as Morse stood staring out of the window inside a fifth-floor courtroom before the sentencing hearing started, talking loudly with someone she knew.

“I didn’t do anything wrong,” Morse said. “And I didn’t get a fair trial. They can take me to jail because I’m tired of this world. I don’t care anymore.”

Morse has been found guilty by a jury in June on four misdemeanor counts — two of reckless endangerment and two of gross negligence while operating a motor vehicle. The charges stemmed from an incident in 2019 where she attempted to run a woman and her mother off Route 7 in Shaftsbury after a verbal altercation.

Morse was initially charged with six counts, including two felony charges of aggravated stalking with a deadly weapon — a truck — which she used to swerve into the victim’s vehicle three separate times in the same incident. She was found guilty on all counts by the jury, but the court dismissed the most serious felony charges after a motion for judgment of acquittal was filed by the defense team, referencing a recent Vermont Supreme Court decision.

At the sentencing hearing Tuesday in front of Judge Cortland Corsones, Morse, after being asked if she still wanted her lawyer to represent her at the sentencing, emotionally spewed several insults and insinuations at her lawyer and the process that convicted her.

“I don’t feel I got a fair trial,” she said. “I don’t feel she was ever there for me at all. She didn’t do her job. My life is ended. I have nothing to live for. She didn’t do her job for me. It doesn’t make any difference what you do. Every juror was from Bennington. They’re friends with the cops. I don’t want nothing to do with any of it. You do what you feel is right. I don’t care anymore.”

Corsones tried to steer the conversation back to whether she wanted to keep her lawyer, which she eventually agreed to.

Corsones then told Morse the options for her sentence, including the possibility of a driver safety class that she could complete through Restorative Justice, but Morse insisted she didn’t want anything to do with any programs. She was eventually sentenced to zero to three days, suspended, with a six-month probation.

After the hearing ended, Morse walked toward the exits. As she reached the door, she said in a loud voice, “This doesn’t bother me. Next time I will kill her and get away with it.”

The, Bennington Police were called as Morse and her daughter got into a verbal altercation with the victim, with Morse’s daughter attempting to punch the victim. Meanwhile, statements were taken by court officers and Bennington Police. Morse was then issued a citation 15 minutes after her sentencing for violating the conditions of her probation.

Morse was directed to a scheduled hearing for the new charge and was free to go.

The victim of the initial incident spoke with the Banner immediately after the latest altercation.

“Her daughter approached us and asked if she’s ever going to see her grandkid, and I told her, ‘No,’” said Lanteigne, the girlfriend of Morse’s late grandson. Lanteigne agreed to be identified in the news story. “It’s because of this kind of behavior. Then she followed me to my car and tried to punch me through the window.”

Police did not issue any citations to Morse’s daughter but told her that she needed to stay away from Lanteigne and her family.

“I didn’t do anything wrong. And I didn’t get a fair trial. They can take me to jail because I’m tired of this world. I don’t care anymore.”