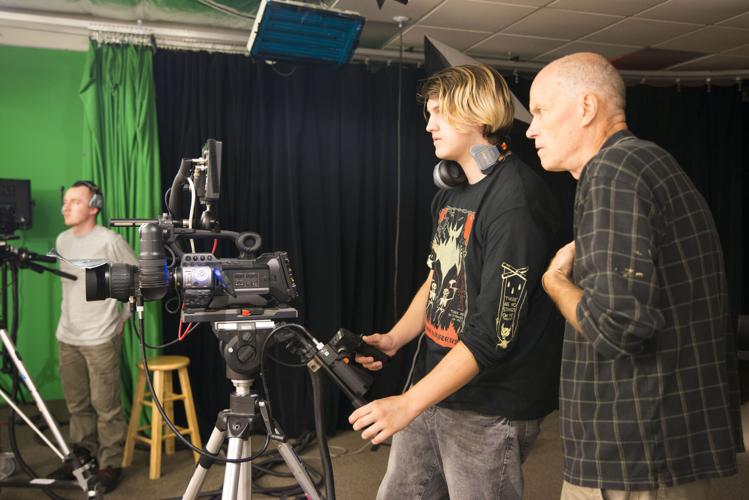 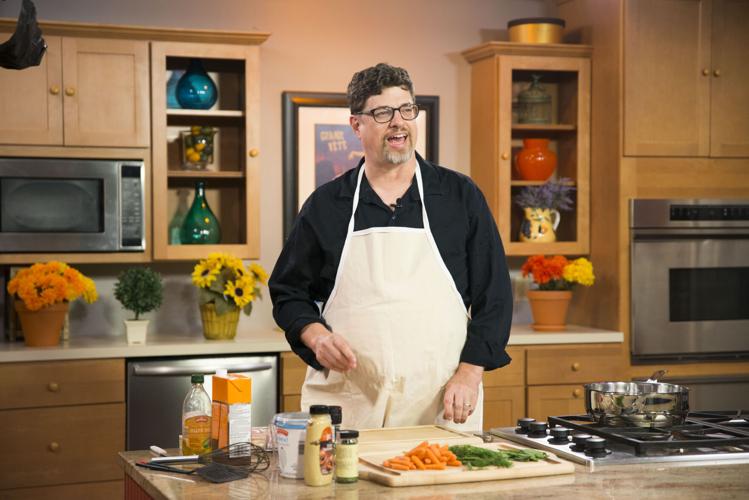 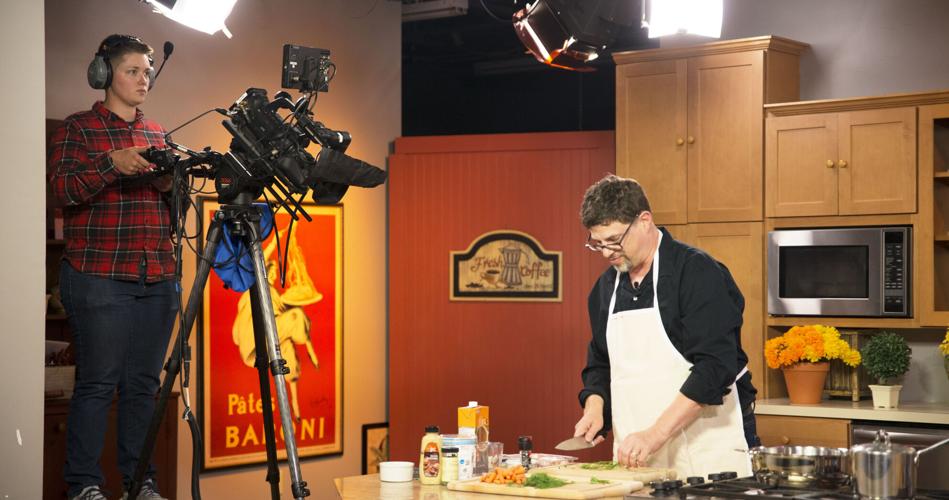 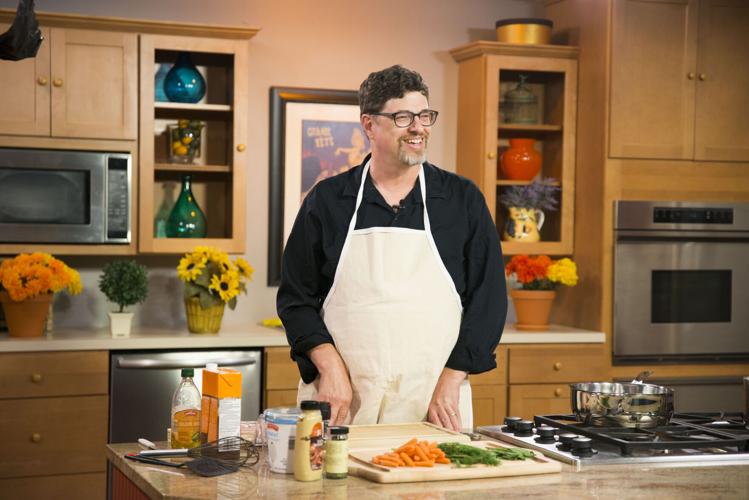 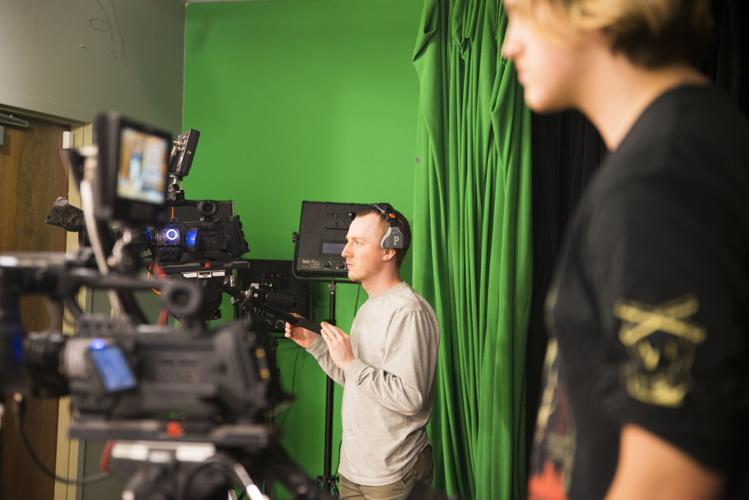 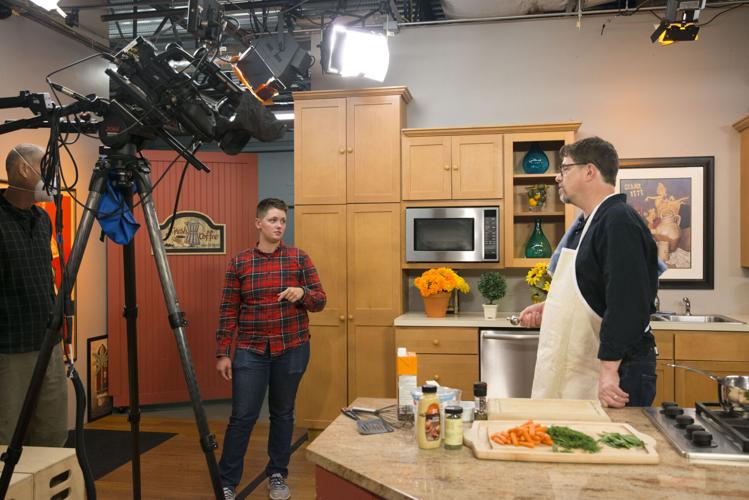 SUNDERLAND — The moment of truth had arrived — and the cameras of “Potluck Kitchen,” a new series on Greater Northshire Access Television (GNAT), were rolling.

So far, so good: The baby carrots, tossed in butter and finely chopped fresh dill, were fork-tender. The chicken thighs were well-browned and cooked through. The tarragon yogurt pan sauce had mercifully not broken, and the flavor and texture were on point. The rice, cooked ahead of time at home, was out of the microwave and ready.

All that remained was to plate my dish, give it a taste and close out the show. But more on that in a bit.

HOW HARD COULD IT BE

What in the name of Julia Child was I doing here?

I gave cooking for “Potluck Kitchen” a try because it seemed like a fun way to illustrate what the program is all about, and to meet the folks behind the scenes.

What I learned from the experience — and from my fellow participants who gave cooking for the camera a try — was that food is a great way to share a little bit about yourself and connect with others.

I also learned that hosting a cooking show is a bit harder than it looks — and that when you’re doing something this fun and this intense, time stands still.

A NEW USE FOR THE KITCHEN

The idea for Potluck Kitchen came to GNAT director Tammie Reilly one morning at 3 a.m., as she was thinking of the next way the nonprofit could use its studio kitchen to connect with the community.

Previous shows such as “Girls Night Out” and “Dinner Party” had been popular and successful, featuring some of the region’s top chefs and a live audience. But it had been a while since that well-appointed studio, built thanks to the community’s generosity, had been used. The COVID-19 pandemic had closed it down.

“I thought about ‘What’s the next phase of this?’ I really wanted to open up to the community. Food is such a connection,” Reilly said. “Why not open it up, have a little fun and give people a taste of it?”

“It’s really about connecting with the community and having fun,” she said.

The call for talent went out by email and on GNAT’s social media channels in late spring, and the response was immediate, Reilly said.

“We have a waiting list — which is exactly what we wanted,” she said. “It was a little slope at first … but once we had it on the air people saw what it was.”

Producer Mark Moffett is coordinating the show, and worked with me by email in the days before my appearance to let me know what to bring — all the food I needed, and any special equipment. During my turn behind the stove, Auburn Sendra, Michael Rudiakov and Brandon Perra were operating the cameras.

Sendra was to my right, working the close-up shots — and at a crucial moment, she used hand signals to let me know where to find a fork and knife. Rudiakov, a senior at Burr and Burton Academy, had the main camera at front and center; Perra worked the alternate angle to my left.

“Typically, when we’re teaching people to create shows, what I say to them is once you get through the third show, it’s all gravy,” Reilly said. “This format is an experiment in some ways — is this going to work? We want feedback … once we get eight to 10 people in, we’ll really know the nuances.”

“But so far,” she added, “Nobody’s walked away and said I’ll never do this again.”

REASONS TO GET COOKING

For Maria Cummins, a Shaftsbury educator and mother of a child with an autism spectrum disorder, showing how she makes avocado toast, with eggs from North Meadow Farm, was an opportunity to do something fun for herself and thank the people who have helped her and her family.

“That show made me feel like I did something fun and did something that showed my personality,” Cummins said. “I’m Stephen’s mom. I’m James’ mom. I’m fine with that. … But that gave me the opportunity to be Maria for a half-second. It just felt good.”

Russell Mills of Manchester, a former business consultant, enjoys cooking and thought it would be fun to share his Szechuan eggplant recipe with the community. His wife Sheila suggested he give it a try, and his episode was the very first produced and aired.

“All I can say is I had a fun time doing it,” Mills said. “It felt comfortable being in front of that camera.”

And Camille Kauffman, Elizabeth Schumacher and Wanda Mooney, representing Paran Recreation in North Bennington, saw the show as an opportunity to replicate one of their cooking class staples — cowboy caviar — with a wider audience, and get the word out about the classes they offer through a grant from Bennington College.

Because they had taught a cooking class through Shires Housing during the pandemic, they were accustomed to using video, Kauffman said.

“It was really fun,” she said. “We’ve made the recipe before, we know how delicious it is and we were able to use fresh vegetables.

“Basically we were excited about taking our program to a greater audience and for PR for our next class series, which starts in September,” she added.

As for me: I picked the recipe because it was a chance to show that it’s neither difficult nor time-consuming to elevate a less-expensive cut of chicken with a simple pan sauce. Using plain Greek yogurt and fresh herbs delivers a creamy texture and flavor with fewer calories. And not for nothing, it’s just plain delicious.

And that brings us back to the kitchen and my finished dish, which it was time to plate.

Now that dinner was ready, all I needed was a plate.

Um … where were the plates?

Why in the name of Emeril Lagasse hadn’t I set aside plates?

Panic was about to set in. But looking down at the shelves under the kitchen counter, I spied a peach-pink Fiestaware platter.

I know: Let’s present this family style — a heaping helping of comfort food, and one that hopefully would not look like dinnertime at a correctional facility.

When it comes to plating, you won’t find my work at the Reluctant Panther or the Copper Grouse. You could call my artistic sensibility “rustic” — which is a nice way of describing “come and get it.”

So I inartfully built a bed of rice for the chicken thighs, spooned out the carrots next, and then applied the sauce. Would Gordon Ramsay approve of my plating? Not bloody likely, but I’d finished, kept all 10 digits, not set the studio on fire, and had fun. It tasted good, and Moffett and Sendra agreed.

And I have to agree with my fellow GNAT chefs — I would totally do this again.

“I always played home ‘Food Network show’ as a child,” Kauffman said. “I got to live out that dream.”

Potluck Kitchen is a cooking show where community members share their talents, recipes, and food knowledge. Potluck Kitchen airs on Comcast channel 1074 Thursdays at 8 p.m.and Sundays at 5 p.m. and on gnat-tv.org.