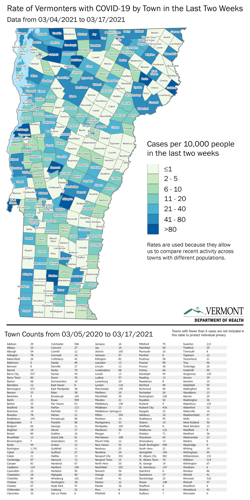 For the second consecutive week, Stratton is the only community in southern Vermont that has had more than 80 new cases of COVID-19 per 10,000 residents over the past 14 days. 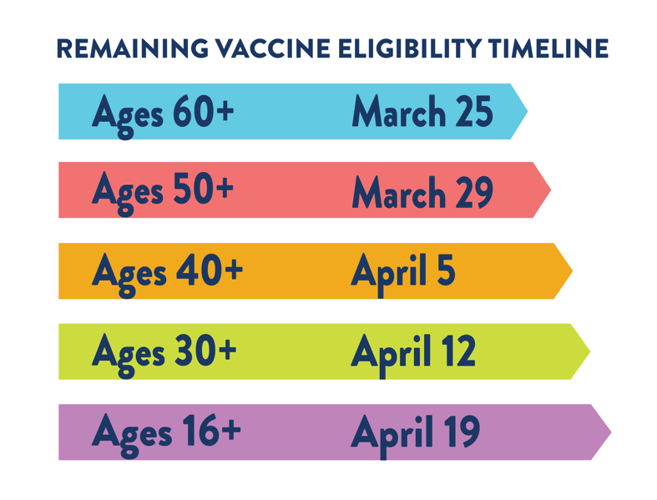 For the second consecutive week, Stratton is the only community in southern Vermont that has had more than 80 new cases of COVID-19 per 10,000 residents over the past 14 days.

The Department of Health reported that 171,060 Vermonters, or 31.2 percent of all those over the age of 16, have received at least one dose of a COVID-19 vaccine.

According to the state, 91,800 people have completed their vaccination, and 79,200 have received a first dose.

In Bennington County, 34.0 percent of residents have received vaccine, and in Windham County, 28.8.

So far, the state has received 322,600 doses of vaccine, 81.5 percent of which have been administered.

Vermonters age 60 and older will be able to make an appointment for vaccination starting Thursday at 8:15 a.m.

Registrations can be made online at healthvermont.gov/MyVaccine, or by calling 855-722-7878. The state is encouraging people to create an account ahead of time so it will be easier to log in when it’s time to make an appointment.

The length of the entire process will vary, but the state advises people to expect it to take approximately two months from the time they register to the time they are considered fully vaccinated. This includes the anticipated time between registration and an appointment, the time of a first and last dose, and the two weeks needed after a last dose for it to be at maximum effectiveness.

Gov. Phil Scott has said his goal is to have Vermonters fully vaccinated by July 1.

Health Commissioner Mark Levine, MD, has cautioned Vermonters that with variant strains of the highly transmissible virus being identified in Vermont, prevention and testing must still be a priority.

Levine said Friday that interviews with people who have COVID-19 indicate that some assumed they had a cold or a sinus infection, instead of first thinking they might have COVID-19. The COVID-19 virus is still circulating in Vermont communities, and the only way to know if you have it is to get tested, he said.

“To really find our way out of this pandemic, along with registering for vaccination as soon as your age band opens, we must all continue to follow the very simple, but critically important guidance of masks, distancing and cautious travel,” Levine said. “This is the only way to stay ahead in the race. Through prevention, testing and vaccination, we can achieve a level of community immunity that will bring us out of this pandemic. We can cross the ‘public health finish line’ sooner, together.”

Gov. Phil Scott has announced updates to COVID-19 guidance for bars and social clubs, such as American Legions and VFWs. These establishments are being moved under the state’s restaurant guidance, which will allow them to reopen within that sector’s current restrictions. These include operating at 50 percent capacity, requiring patrons be seated at tables with a maximum of six per table, 6 feet of distance between parties, masking and more.

Municipalities will be able to place more restrictions on these establishments in their jurisdictions.

VT. TAKES STEPS TO ENCOURAGE VACCINATIONS AMONG PEOPLE OF COLOR

Vermont Health Commissioner Dr. Mark Levine says the state is continuing to work to vaccinate people of color in Vermont.

People of color are more likely to become infected with COVID-19 and more likely to suffer severe consequences of the disease than are white, non-Hispanic Vermonters, Levine said.

To help alleviate that discrepancy, if one member of a family meets the state guidelines to be vaccinated, that person can bring along family members to also be vaccinated.

Levine says there was a clinic scheduled for Saturday in Burlington in which 262 people of color were due to be vaccinated. Another clinic for about 100 people is scheduled for Brattleboro next week. Both of those clinics are full.

The Health Department is continuing to arrange future clinics for people of color.

GROUPS ASK GOV. BAKER TO DELAY NEXT PHASE OF REOPENING

Twenty-nine organizations are asking Gov. Charlie Baker to delay the reopening steps taking effect Monday, by at least at month.

Massachusetts moves into the next phase of reopening starting Monday, with large sports venues allowed to open with 12 percent capacity. Gathering limits for event venues and in public settings will increase to 100 people indoors and 150 people outdoors, the administration said.

“We constantly go back and look at what we’ve done and think about it as we look forward,” Baker told WBZ. “The idea that this process isn’t an iterative one, is just wrong. We’re constantly talking to people about this.”

Carlene Pavlos, executive director of the Massachusetts Public Health Association, drafted the letter to Baker from the groups.

“We’re concerned that there’s the possibility of a fourth wave of the pandemic just as we’re about to see that light that we all need at the end of the tunnel,” said Pavlos.

The CDC this week urged states to reconsider rolling back restrictions, the news station reported.

Maine’s Republican senator has joined with a group of colleagues who want to make certain families of veterans who die due to coronavirus receive survivor benefits.

Sen. Susan Collins is working with a group of Democratic and Republican senators from around the country on the legislation. The act would require the U.S. Department of Veterans Affairs take steps to provide dependent benefits when a veteran dies of COVID-19.

Collins said the proposal would make sure veterans’ families get access to benefits they have earned.

More colleges and universities in New Hampshire are planning to fully reopen in the fall.

The University of New Hampshire joined Keene State College and Plymouth State University this week in announcing plans to fully resume in-person classes, athletic events and other activities in the fall.

“During the last year we have learned a lot about using technology to enhance education and student success, and we expect this coming academic year to be even better than the “normal” of the past,” UNH President James Dean said in a recent message to students.

Dean said that he doesn’t expect the virus to be eliminated, and that some precautions likely will remain in place.

Two Vermonters died of COVID-19 over the past two days, the Vermont Department of Health reported. The state’s death toll is now 219.

Twenty-two Vermonters were hospitalized with the disease as of Sunday, and five of those patients were in intensive care.

The health department reported 148 new cases of COVID-19 in Vermont on Saturday, and 149 new cases on Sunday, for a total of 297. The new cumulative total was reported as 17,740, which is 347 higher than the total reported Friday. The discrepancy was not explained.

Bennington County continues to have the highest infection rate of COVID-19 in Vermont, at 453.0 cases per 10,000 residents since the beginning of the pandemic. Chittenden County is second, at 339.9, while the rate in Windham County is 245.3.

So far, 347,343 people have been tested. The reported statewide seven-day average for positive tests has risen slightly, to 1.4 percent. In Bennington County, the positivity rate is 3.2 percent.

The number of Vermonters reported to have recovered from COVID-19 rose by 203 since Friday, to 14,849.