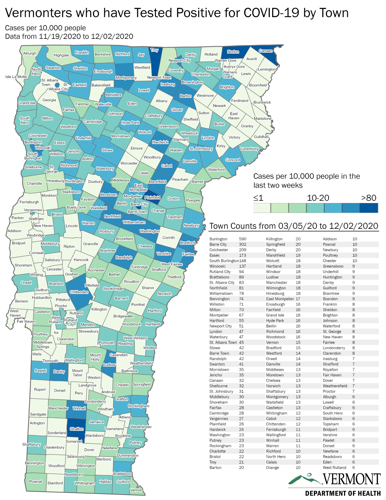 With this regular feature, the Banner runs down breaking local and regional developments in the coronavirus pandemic.

Two Vermonters died of COVID-19 over the past two days, the health department reported Sunday. The death toll is now 79.

Twenty-two Vermonters are hospitalized with the disease; two of those patients are in intensive care units.

The health department reported 127 new cases of COVID-19 on Saturday, and 120 new cases on Sunday, for a total of 247. The cumulative total reported was 5,015, which is 252 higher than Friday’s total. The department did not explain the discrepancy.

The health department reported that 401 people were being monitored for the disease as of Sunday, an increase of five from Friday. Of these, 215 are visitors to Vermont.

As the coronavirus has spread to long-term care facilities in Vermont, the state is ramping up testing in those institutions.

Starting Monday, staff at assisted living and residential care facilities in Vermont will be tested for the coronavirus twice a week using a PCR test, said Human Services Secretary Mike Smith on Friday.

The state will also make antigen tests available to such facilities to use upon identification of symptomatic residents or staff and rapid antigen tests to test staff daily at all skilled nursing facilities, he said. The state is also implementing weekly PCR testing for those staff, he said.

Bennington College reported one new case of COVID-19 on campus, identified over the Thanksgiving break. “The Vermont State Health Department conducted contact tracing, the person is in isolation, and no one else was identified as a close contact,” college President Laura Walker said in a statement on the college’s website. “We will continue to keep you informed, while also working to protect the privacy of individual members of our community.”

Walker said the event shows the college’s COVID-19 safety measures working as they were intended, to quickly identify and contain the virus when it appears within the community. “It’s a reminder that if we all continue to adhere to testing, reporting, masking, and distancing protocols, we can maintain a safe and healthy campus through the holiday season,” Walker said.

The death toll from COVID-19 has risen to 17 at Hillcrest Commons Nursing and Rehabilitation Center in Pittsfield, Mass., — an increase of nine in recent days, according to state Rep. Tricia Farley-Bouvier.

In a Facebook message posted Sunday afternoon, Farley-Bouvier said the number of residents infected with the virus has climbed to 166 — 74 percent of the total resident population of 224.

In addition, 71 staff members have now tested positive, according to Farley-Bouvier, who attributed her information to the city of Pittsfield. Hillcrest, the second largest nursing home in the state, has over 200 employees, according to Lisa Gaudet, spokewoman for Berkshire Healthcare Systems, which owns the facility.

Gaudet said as of Saturday evening, 18 residents were hospitalized, “with a number expected to return.”

In her post, Farley-Bouvier, D-Pittsfield, attributed the outbreak directly to large gatherings in the community that are believed to have contributed to community spread of the virus.

“I simply do not know how else to say this so that people will listen ... but individual actions have REAL consequences. These residents are not merely a data point. They are your neighbors, your neighbors parents and grandparents,” she wrote. “They taught you or your parents in school, ran small businesses, were active in the community.”

Snowmobilers in parts of Vermont and New Hampshire predict a busy year on the region’s trails as an outlet for riders seeking safe activities during the coronavirus pandemic.

Some are expecting snowmobiling to be one of the outdoor activities people gravitate towards this winter because riders don’t typically come into close contact with others.

“Based on what happened this spring and summer with outdoor recreation, we’re assuming if there’s good snowfall then snowmobiling will be more popular than it has been in the past few years,” said Dan Gould, the executive director of the New Hampshire Snowmobile Association.

Weather permitting, the snowmobile trails in both states open in December.

Walt’s Sales & Service in Derby is reporting that snowmobile sales are up at least 10 percent, and more than 30 percent at MOMS North Country Powersports in Groveton, N.H., according to the Caledonian Record.

“It’s been huge. The problem now is we can’t get inventory. We’re exceeding what the manufacturers can produce,” said MOMS General Manager Larry Meservy, Jr. “Our growth last year was phenomenal, and this year, we’re on track to break another record.”

Travel restrictions for people coming into the region from outside and restrictions on restaurants and other retail establishments could impact the activity.

Chris Roese, president of the Brighton Snowmobile Club, said he was confident that out-of-state or out-of-area snowmobilers will conform to rules designed to limit the spread of COVID-19.

“It’s definitely a delicate situation, in particular up here because of the nature of the visitors and landowners up here,” he said. “It’s a hot spot for vacations. We’re just going to have to adapt accordingly and hold on.”

The Vermont Association of Snow Travelers, or VAST, has issued updated COVID guidelines on its website, https://vtvast.org/.

As winter approaches, road crews around Vermont are planning for what they will do if plow truck drivers get infected with COVID-19, the illness caused by the coronavirus, as cases have been climbing in Vermont and around the country.

Some communities like Williston are looking into having contracts with local businesses that could do some plowing.

“Even if you have all these contacts in place, and you have mutual aid agreements, it’s likely there may not be enough people to go around in general, because roads have to be plowed in other towns, too,” Joe Damiata, director of risk management services at the Vermont League of Cities and Towns, told the Times Argus.

Sara Tully, the town administrator in Mendon, said the town is making plans to back up its backup drivers at the state’s suggestion.

Maine health officials say supplies of rapid COVID-19 tests that recently became available at 65 pharmacies across the state are likely to end without additional funding by the federal government.

The Portland Press Herald reports the rapid tests are seen as a key tool to fight the pandemic.

Maine’s Health and Human Services Commissioner Jeanne Lambrew said the federal government has been providing the rapid tests, but that will stop at the end of the month.

Results of the rapid tests can be available in 15 minutes or within hours. Regular tests in Maine usually take 24 to 48 hours or longer to come back.

A coronavirus relief bill being considered by congress would include money for testing.

This fall Maine received 400,000 of the rapid tests, produced by Abbott Laboratories, with 300,000 of them designated for pharmacies where people could get a test for free without a doctor’s note.

The DCU Field Hospital was set to open its doors Sunday in Worcester as a location where stable non-COVID-19 patients who would be transferred from other hospitals.

WHDH reports the field hospital does not service walk-ins or emergency cases.

The field hospital will ensure hospitals have the capacity to take care of sicker COVID-19 patients and people with heart attacks, strokes, and other ailments that require hospitalization, he said.

Broach said officials are predicting increased hospitalizations over the next several weeks.

‘We see the caseload rising right now, and I think we’ll see the hospitalizations rise a week to two weeks from now,” Broach said.

Maine Gov. Janet Mills said Saturday she tested negative for the virus that causes COVID-19 after she was exposed through a member of her executive protection unit.

In a statement distributed by her office, Mills, a Democrat, said Saturday her case is proof that “masks work.”

“If my executive protection unit member had not been wearing a mask last Saturday while I was in the vehicle with them, I firmly believe I would have contracted the virus,” Mills said.

“No matter where you are or who you are with, taking these simple steps protects you and anyone you come into contact with,” Mills said. “Even someone who has limited contact with the public, like myself, can inadvertently be exposed to this dangerous virus, through nobody’s fault.”