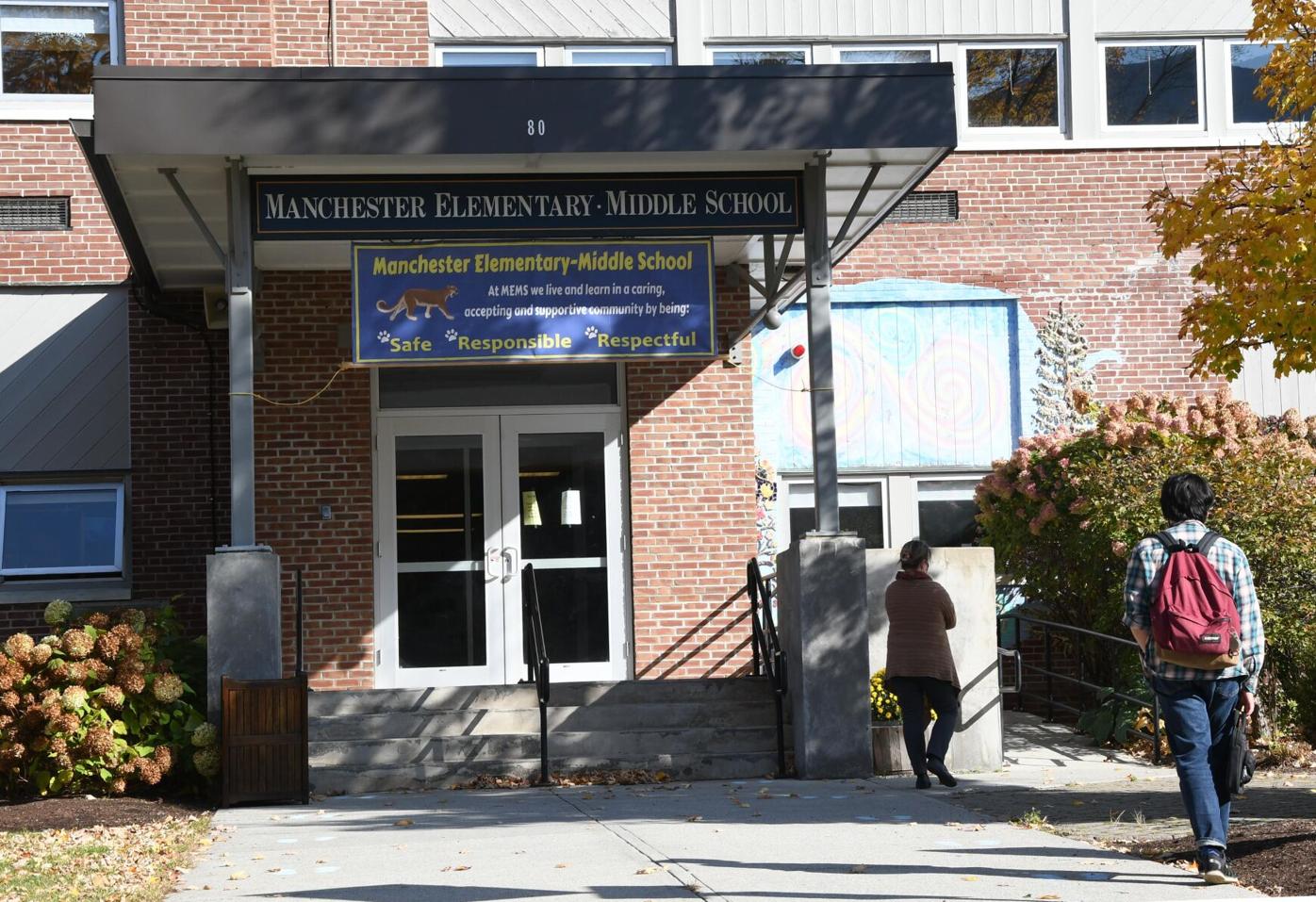 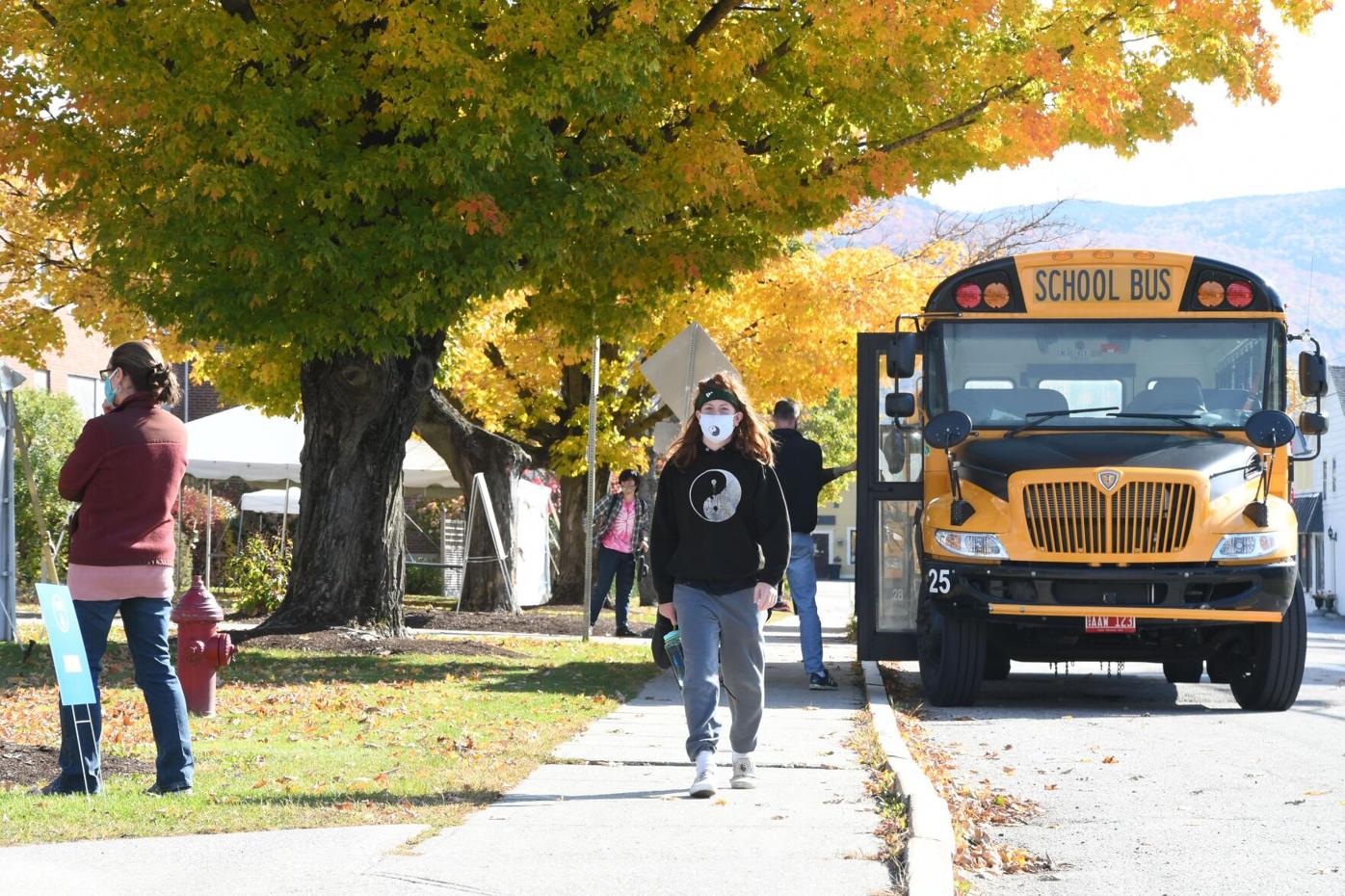 Students of Manchester Elementary Middle School in Manchester getting off the bus on Monday.

Students of Manchester Elementary Middle School in Manchester getting off the bus on Monday.

MANCHESTER — Kindergarten students at Manchester Elementary Middle School will not attend class in person this week after a student tested positive for COVID-19 via an antigen test, Bennington-Rutland Supervisory Union Superintendent Randi Lowe told BRSU parents and employees in an email on Sunday night.

A determination will be made later this week concerning whether in-person instruction for kindergarten students can resume next week, Lowe added.

The supervisory union was notified of the test result the night of Oct. 10, she wrote.

Once informed, the “principals and nurse at MEMS and I immediately began collecting information and have been working closely with the Vermont Department of Health throughout the day,” according to Lowe. “Given the circumstances surrounding this particular situation and the fact that this student was a close contact to someone who tested positive, the Vermont Department of Health is considering this a positive COVID-19 case.”

This past July, dozens of people tested positive for COVID-19 at Manchester Medical Center, which triggered concern about a possible outbreak. Subsequent PCR testing, however, confirmed only four of those positive cases. The antigen-test manufacturer has defended the accuracy of those initial results, while Vermont Health Commissioner Dr. Mark Levine has said that epidemiological data does not indicate that an outbreak occurred.

“People who test positive on an antigen test are considered a ‘probable case’ until confirmed by a PCR test,” Ben Truman, public health communication officer with the Vermont Department of Health, wrote in an email on Monday. “We respond with public health action to probable cases (e.g., contact tracing isolating, quarantine of close contacts) and we recommend a follow-up PCR test.”

The health department supports “the action of BRSU and all schools to reach out to its families, students, teachers and staff, and their operational decisions based on state guidance,” Truman wrote.

Lowe wrote via email on Monday afternoon that the student took a PCR test at the same time as the antigen test but that the superintendent was not yet aware of the PCR results.

“Out of an abundance of caution,” Lowe wrote in the email to the BRSU community, “the kindergarten classes at MEMS will stay home and participate in distance learning the week of October 12, 2020.”

As of Sept. 28, there were 30 kindergarten students enrolled at MEMS, which has a total enrollment of 366 children in pre-Kindergarten through eighth grade, according to recent Taconic and Green Regional School District board materials.

Students in first through eighth grades will continue to participate in school this week as previously scheduled through a model that mixes in-person and remote learning, MEMS co-principal Debra Fishwick confirmed. Students are divided into two cohorts, with each group physically attending school two days per week. Pre-kindergarten students returned to four-days-per-week school attendance on Monday.

State health department contact tracers “will be calling the families of students in the same cohort” of the affected student on Monday, Lowe wrote, urging families to answer those calls.

The supervisory union recommends “that everyone continue to limit the spread of COVID-19, even if your child is not experiencing symptoms,” Lowe wrote. “The most important thing you can do is to make sure your child is wearing a mask and washing their hands.”

The school’s cleaning protocols “follow the Health Department guidance and the classroom space will be disinfected, again, prior to being used,” according to Lowe.

The supervisory union cannot release the name of the person afflicted with COVID-19, Lowe wrote, adding that she “strongly” encourages the community “to remember that stigmatizing our community members does not lead to improved outcomes.”

Earlier this year in March, after schools statewide had moved to remote learning for the remainder of the school year, the supervisory union announced “a positive COVID-19 case within our Manchester Elementary Middle School community” but did not detail the person’s relationship to the school.