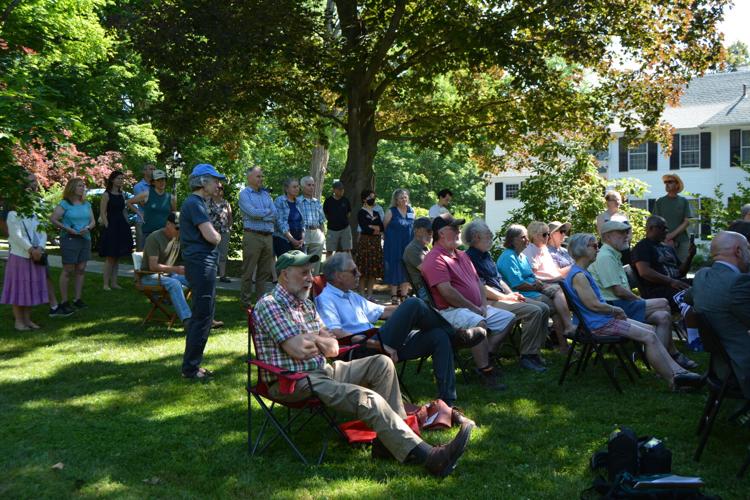 A crowd gathered in front of Catamount Tavern to honor  Margaret “Peg” Bowen. 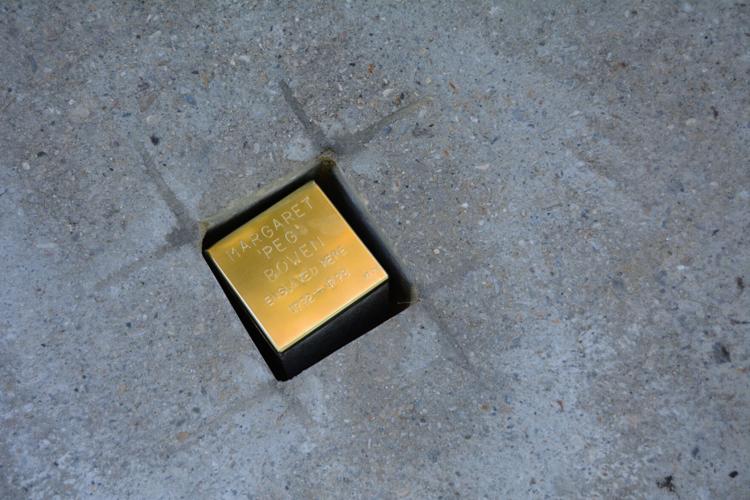 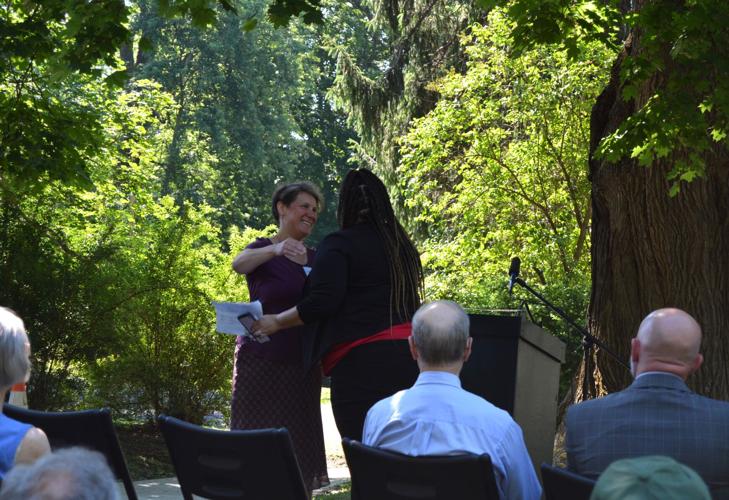 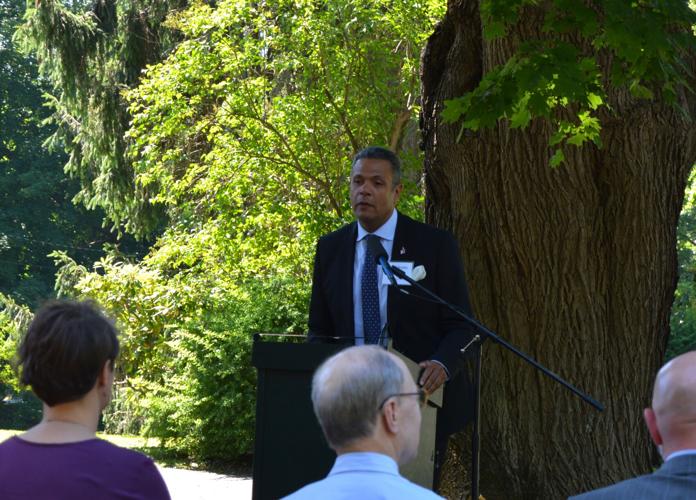 A crowd gathered in front of Catamount Tavern to honor  Margaret “Peg” Bowen.

BENNINGTON — Margaret “Peg” Bowen was enslaved in Bennington from 1772 to 1778. But her memory will live on thanks to a Stopping Stone dedicated to her in front of Catamount Tavern in Old Bennington.

On Saturday morning, a Stopping Stone Dedication was held to honor Bowen. Martin Mahoney, the executive director of the Bennington Museum, opened the dedication. He said the museum is committed to telling the stories of people who have been “displaced, subjugated, oftentimes forgotten or purposely pushed aside.”

Mahoney then introduced the first guest speaker, Paul Growald who is the founder of Stopping Stones.

Growald “copied” the idea from Stolpersteine, which means stumbling stones, in Europe. These Stolpersteine are memorials for victims of the Holocaust. One of these memorials was placed in the town his mother’s family came from, before fleeing the Nazis.

“I realized that, in contrast to Germany, where there are all kinds of memorials … my own country had done almost nothing to recognize those individuals who were enslaved,” said Growald. He hand stamped Bowen’s name into the Stopping Stone, letter by letter, to honor Bowen’s life and memory.

Callie Raspuzzi, the Bennington Museum collections manager, spoke next and gave a history of what is known about Bowen’s life. Stephen Fay, proprietor of the Catamount Tavern and supporter of the Green Mountain Boys, purchased Bowen and another enslaved person, Pomp Morgan, in 1772 from Hadley, Mass.

“We have not found anything yet about the lives of these two people here in Bennington,” said Raspuzzi. “What we know is from private diaries, receipts and memoranda books that were saved by their enslavers in Massachusetts.”

Moses Porter of Hadley, Mass. purchased Bowen in 1754 when she was 12 years old. When Porter died, she remained enslaved by his family.

In 1761, she had her first daughter, Rose, and then in 1765, she had her second daughter, Phyllis. In May of 1771, Morgan requested the Town Clerk record his engagement to Bowen, but because they needed permission from their enslavers to marry, their marriage was denied.

About a year later, “a solution presented itself,” said Raspuzzi. Fay purchased the couple, but Bowen had to make another decision — she had to choose between her children and her husband. At the time, her daughters were seven and 11 years old, but she chose her husband.

While very little is known about Bowen’s life, what is known is that the Vermont Constitution abolished slavery in 1777, but Bowen was still enslaved in Bennington through 1778.

Mia Schultz, president of the Rutland Area NAACP, spoke next and placed the Stopping Stone. As she placed the stone, Schultz said, “With the placement of this Stopping Stone, we remember the life of Margaret.”

Instead of writing a traditional speech, Schultz wrote a letter to Bowen in which she said, “I claim you and I honor you as my ancestor. I give thanks to you and I shed tears for you.”

Dr. Lisa Downing-Forget, the co-chair of Southern Vermont Health Care’s Diversity, Equity, Inclusion and Belonging Committee, spoke next and gave a brief overview of the healthcare and life expectancy of Bowen’s generation.

“When Peg was alive, the average life expectancy for African Americans was between 25 and 35 years old,” said Downing-Forget. “One in five women died in childbirth … 25 percent of all children did not make it to the 12-month-old mark, and 50 percent did not make it to 5 years old.”

Downing-Forget described how enslaved people took healthcare into their own hands with “treatments that had been passed down by generations or remedies from their own gardens.” She also spoke of how white doctors would experiment on enslaved women without their permission — and without anesthetic, which was available at the time.

While Raspuzzi and Downing-Forget described what enslaved women faced in the past, Dr. Alfredo Medina, the vice president for Diversity, Equity and Inclusion and College Diversity Officer at Bennington College, enlightened the audience by raising awareness for the issues the Black community faces today.

“We’re operating under the New Jim Crow,” said Medina. “We’re operating under a system, under policies, that disproportionately continue to impact Black bodies in America.” He spoke of the importance of advancing anti-racism, even though “that burden can really be hard to carry” for Black Americans.

“Black bodies in America today, are not receiving their fair wages,” he said. “And just yesterday, with the overturning of Roe versus Wade, understand that while it is going to impact all women, disproportionately it is going to wreak havoc on Black bodies.” Medina also spoke about how difficult it is for Black people to find access to mental health services.

“We are living in modern day slavery,” he said. “We think about mass incarceration, more than a third of Black people are incarcerated in this country, that means their voting rights are taken.”

Jonathan Phipps, Southwestern Vermont Supervisory Union Equity Coordinator, was the final guest speaker. He reminded everyone that his parents were “born at a time where it was still acceptable to discriminate against people politically, socially and legally.” He’s only 36 years old.

Phipps said, “I hope the historical acknowledgement of Peg helps us understand not only how far we have come, which we should applaud ourselves for, but also how far we really have to go.”