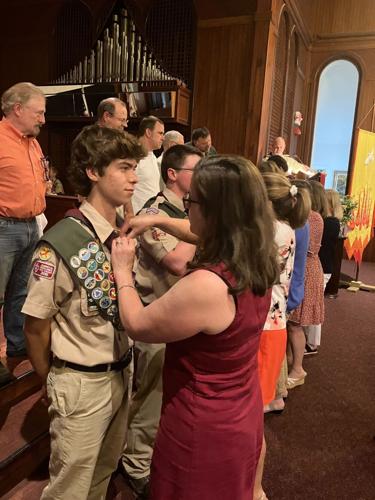 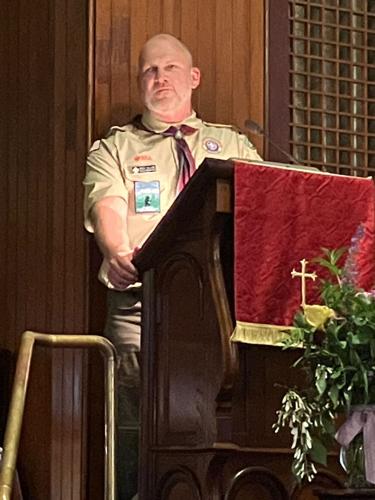 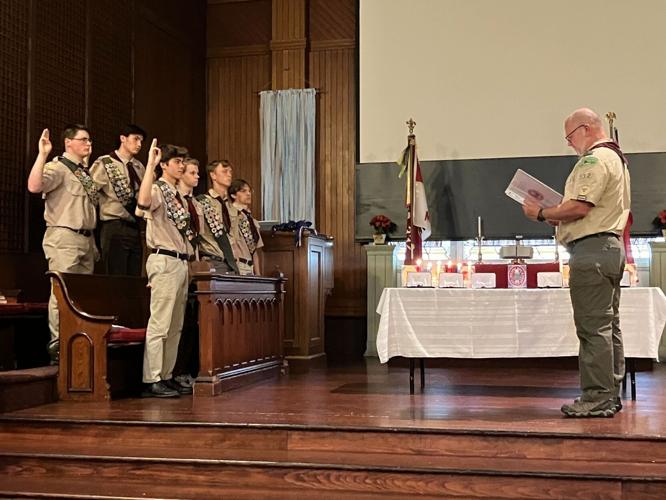 Jacob Leary, Charlie Levene, Sean Moran, Nathaniel Jacobs, Thomas Andres and Sebastian Saunders were bestowed with both the honor and — as their scoutmaster Greg Gilliam put it — the responsibility of being an Eagle Scout. Similar to the Marine Corps adage, “Once an Eagle Scout, always an Eagle Scout” was uttered several times throughout the proceedings.

“You know it’s going to be a burden, right?” Gilliam joked. “People are going to throw ropes at you and ask you to tie a square knot … they’re going to pick up strange plants from cracks in the sidewalk or places in the woods and ask you if it’s edible or how to cook it.“

Gilliam made light of the more cheerful stereotypes of the Eagle Scout, but also was sure to convey the deeper importance of the special night that is a culmination of years of work rising through the ranks of Boy Scouts, living by its moral code and serving their community.

“You’re not expected to remember all of that. What you are expected to remember is the togetherness, the camaraderie, the good times and bad times,” he said. “You need each other and so does your community. What is expected of you going forward is that you will contribute to your community. You will be part of the solution and not part of the problem. I’m happy for you, I’m so very proud of you, and at the same time, the world is counting on you.”

That camaraderie that Gilliam mentioned was a recurring theme in everyone’s remarks throughout the night. Jacobs, who recently moved to Manchester from Maryland, echoed that in explaining what the Scouts meant to him.

“I’ve moved five or six times in the last decade,” Jacobs said. “These moves have always shaken up a lot of different aspects of my life, but there’s always remained one constant — scouting.”

Scouting is quite an investment of time and energy in a day and age where teens seem to have more distractions than ever. The average age of the 61,000 Scouts nationwide to reach the rank in 2019 (the last year data was available) is 17.3 years, and those who attain it have had scouting as part of their lives almost as long as they can remember.

“I’ve known Tom (Andres) since I was in second grade,” Saunders said after the ceremony. “So we just spent over 10 years in Scouts together.”

While it certainly wouldn’t be overstating it to say that the Boy Scouts is a brotherhood for those that saw it through to the rank of Eagle, for Saunders, scouting is quite literally a family tradition. His brother, Jonathan, a junior at the University of Vermont (where Saunders is headed in the fall), was an Eagle Scout.

The highlight of the night, though, was Saunders formally honoring his father, Gary, as his most influential mentor.

“Without this man, I’m not in the Scouts today,” the younger Saunders said before calling his father up to accept his ceremonial pin. “[I] most definitely would not have achieved Eagle without his expertise, guidance and leadership that I could never express my gratitude enough for.”

In fact, it was Gary Saunders who five of the Scouts formally recognized as their most influential mentor immediately after their induction. Saunders, a Scout himself years ago, went through the ranks with his sons since he moved to Manchester in 2009, clearly making an impact on many more along the way. He passed the scoutmaster torch to Gilliam last June.

When Andres came to the podium to recognize Saunders, he recounted that Saunders was his subject on a recent college application essay prompting him for a person that inspired him.

“My former scoutmaster’s enthusiasm for mentoring inspires me,” Andres said during his remarks prior to recognizing Saunders. “Christmas tree cultivation, maple syrup production, community service. His joy springs from his time and his knowledge.”

The Eagle Scout induction is just part of an emotional week of new beginnings, as five of the six are seniors at Burr and Burton Academy (Leary is a junior at Long Trail in Dorset), and will be completing their milestones in Scouts and in high school all within a 24-hour period.