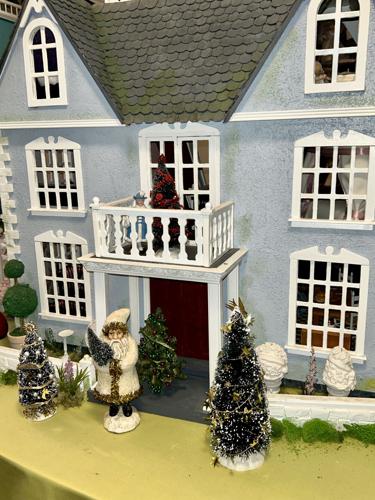 The Dollhouse and Toy Museum of Vermont is once again staging its annual holiday Festival of Tiny Trees. Many of the trees have been created by local artists, and all of the dollhouses now are decorated for the holidays. 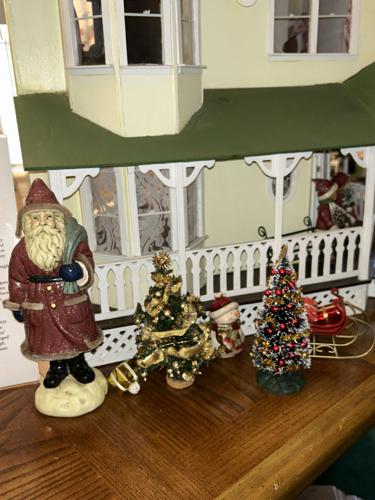 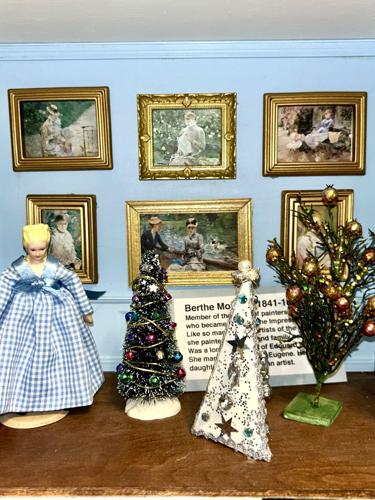 The Dollhouse and Toy Museum of Vermont is once again staging its annual holiday Festival of Tiny Trees. Many of the trees have been created by local artists, and all of the dollhouses now are decorated for the holidays.

BENNINGTON — The Dollhouse and Toy Museum of Vermont is once again staging its annual holiday Festival of Tiny Trees, with more than 200 decorated miniature trees placed all around the museum, including in the galleries of Vermont MoMA, the Vermont Museum of Miniature Art. Many of the trees have been created by local artists, and all of the dollhouses now are decorated for the holidays. For those wanting to decorate their own dollhouses for the holidays, some of the miniature trees will be for sale.

Vermont MoMA showcases the works of many famous artists from Vermeer to Andy Warhol to John Singer Sargent and Modligiani in miniature form, along with works of local artist Patsy Santo that capture many scenes of Bennington in the 1950s and ’60s.

The new exhibits for the holidays showcase dolls representing characters from vintage Christmas films, including Shirley Temple, who appeared in a half dozen holiday films as a child. There also will be a display of vintage nutcrackers, many of them from Germany.

Once again, the museum will have displays showcasing a Victorian Christmas in miniature, describing how many of our most popular Christmas traditions came about during Queen Victoria’s reign, which was from 1837 until 1901. These Victorian traditions include Christmas trees, Christmas cards, Christmas Caroling, and the Nutcracker Ballet, which was first performed in St. Petersburg on Dec. 18, 1892. It also was during this time that the poem “A Visit from St. Nicholas” became widely popular, and that Santa Clause (who had been a part of the folklore of the Dutch colonists in New York) became the red-robed and white-bearded figure that we know today.

Although it’s hard to imagine, at the start of the 19th Century Christmas was hardly celebrated in this country. There were no Christmas trees, no Christmas cards, few Christmas presents, and no Christmas turkeys. It was a religious feast day, particularly for Catholics, but many businesses stayed open, not considering it to be a holiday at all.

This began changing dramatically after Queen Victoria married Prince Albert in 1840. Albert was from Germany, and he introduced the German tradition of decorated and lighted Christmas trees to Buckingham Palace. In a very short time, many homes in Britain had such trees, bedecked with candles, fruits, sweets, decorations and small gifts. In 1843, the first Christmas card was designed in London, and within a short time millions were being mass produced. Both Christmas trees and Christmas cards quickly spread to America. Of particular interest to Vermonters is the fact that the first president to send Christmas Cards from the White House was Calvin Coolidge. Coolidge sent only a handful, but in recent years presidents have sent out more than a million.

There had been caroling since the Middle Ages, but this also became much more popular during the Victorian Era. Groups of carolers went from home to home, singing carols and asking for food and drink in return, telling listeners to “Bring out the figgy pudding.” The carolers were called Wassailers because the drink they sought was a hot mulled cider called wassail. The wassail bowl often had rounds of toast floating in it, which is how a short speech made before raising a glass came to be called a “toast”.

A later Christmas tradition in this country became the setting of model electric trains around the base of a tree. The Dollhouse Museum has been given the train that Priscilla and Charles Salem bought for their sons in the 1970s, and has set it up with the tracks running around a toy village of churches, schools, businesses and homes against a painted a backdrop of Vermont mountains that was created by Beverly Petrellis.

Admission is $2 for children three and older, $4 for adults, and $10 for families. For more information, visit the museum’s web site at dollhouseandtoymuseumofvermont.com or call 401-578-9512.