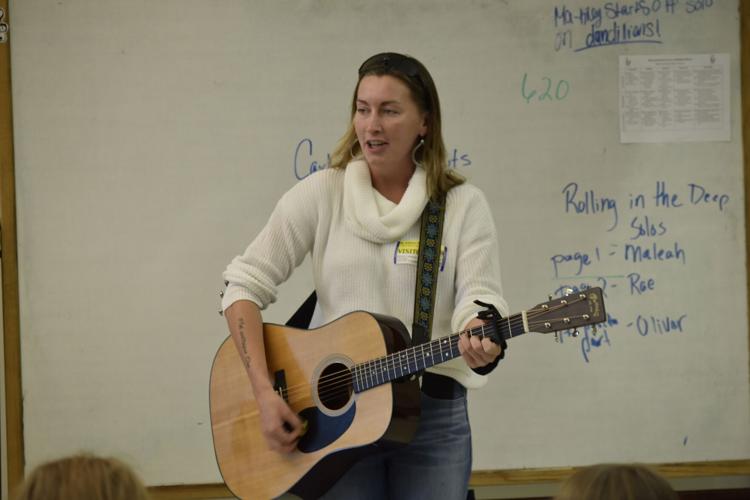 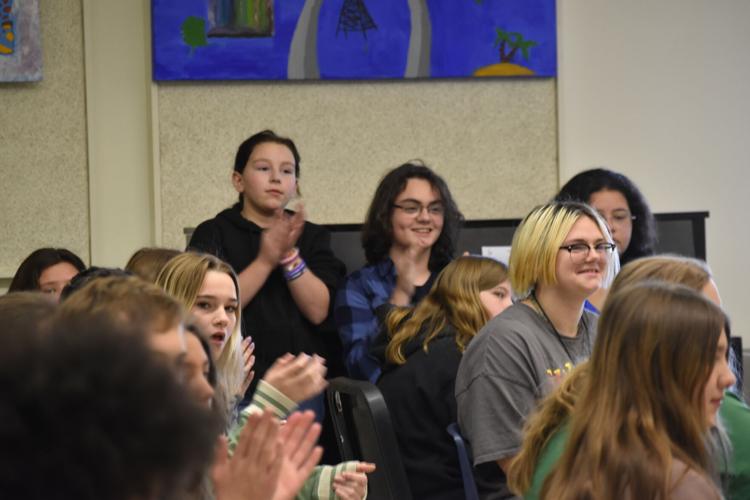 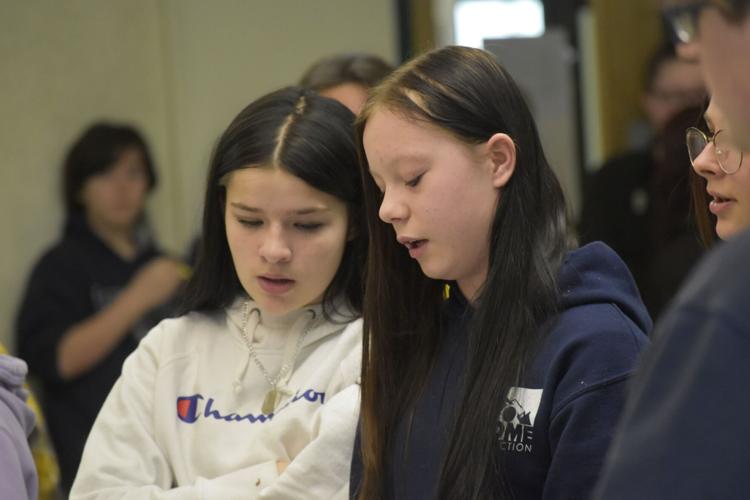 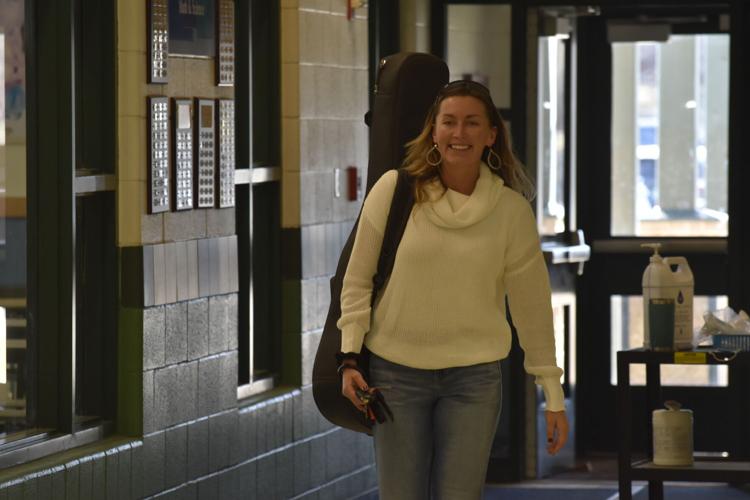 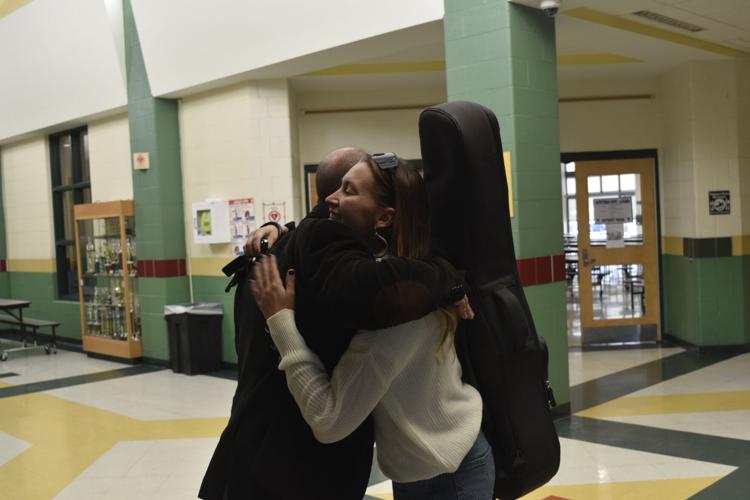 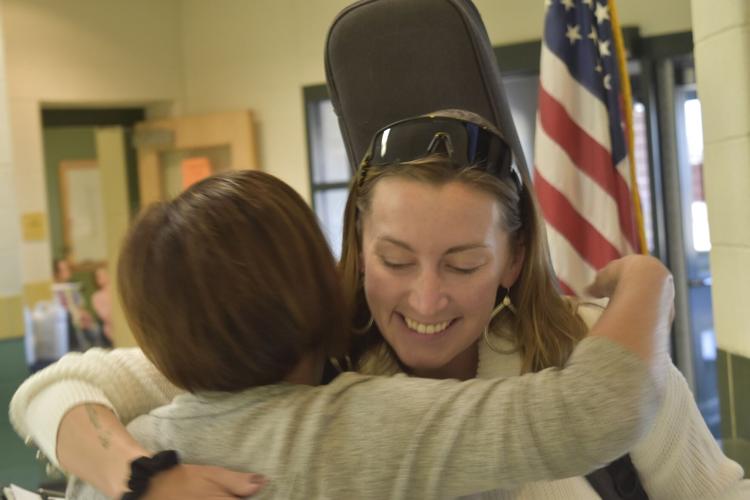 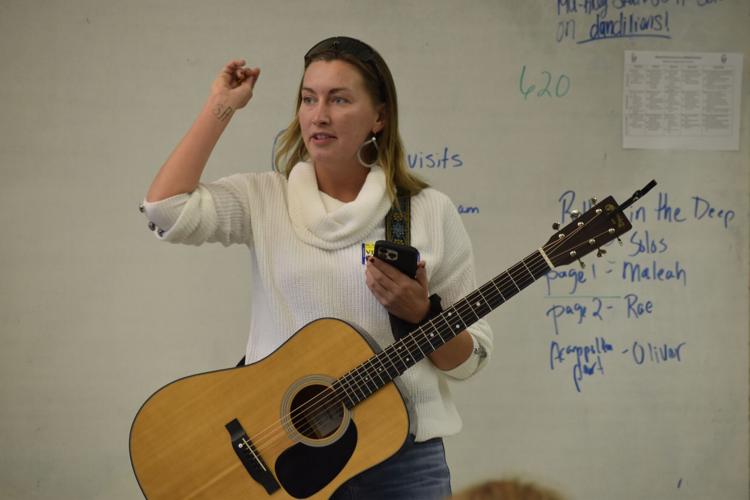 BENNINGTON — Country music singer and songwriter Carly Rogers has a busy Thanksgiving weekend planned while she’s visiting her hometown — three shows in four days, all a stone’s throw from the Four Corners.

But that busy schedule didn’t keep Rogers from spending about an hour in Matt Edwards’ chorus classroom at Mount Anthony Union Middle School on Tuesday — a classroom where she got education and inspiration to follow her dreams.

For an hour, Rogers answered student questions, performed her music, listened to their singing, and offered wisdom from her personal experience.

Rogers, who moved to Nashville after graduating from Mount Anthony Union High School in 2014, walked into the middle school with her guitar bag over her shoulder shortly before 10 a.m. Tuesday.

It brought back memories for Rogers and for some teachers, who greeted her in the lobby or popped into the class to watch and listen. As a kid, Rogers was part of MAUMS’ first sixth-grade class.

Laurie Burdick, an intensive needs specialist at MAUMS, was among those welcoming Rogers back to MAUMS. She’s known Rogers since she was a kid.

“She’s very dedicated to her craft,” Burdick said. “She has been since she was little.”

Once the students settled in and quieted down, Rogers sang verses from two of her songs — “These Walls,” which she wrote about her family home in Bennington, and “Straight Out The Country,” which one of the students requested.

The students returned the favor, singing “Dandelions” by Ruth Berhe and “Rolling in the Deep” by Adele.

Rogers, standing in front of the class, listened intently and nodded along to the beat. After the first song, she praised the soloists, and suggested that they turn up the volume, and their confidence, a little bit. They did so on “Rolling in the Deep,” and Rogers said she was impressed with the solos and the group’s harmonizing.

One of the young singers, after delivering a solo, had an emotional moment amid the music, sitting down to shed some nervous tears as friends came to her side. After class, Rogers reassured the student that such strong emotions are natural — and recounted times she’d experienced the very same thing.

“I know that feeling of being so nervous you can’t help but start reacting,” Rogers said. “That is very normal, and I felt that way about a lot of things.”

Edwards said the visit went even better than he'd hoped.

"the kids asked great questions," he said. "What I want to impress upon my kids is that there's nothing magic about what their dreams are. You have to work hard at the specific things you have to do, and if you have the opportunity to get some feedback from an expert, that's pretty valuable."

The students also now know that "[Rogers] was a kid here at the school just like I am, so it makes things real," he added.

While Rogers connected with past teachers and her middle school roots, she has a full plate for the rest of Thanksgiving weekend.

On Wednesday from 8 to 11 p.m., Rogers will perform at Madison Brewing Company on Main Street. On Friday from 8:30 to 11 p.m., she’ll be at the Village Garage Distillery, as part of its launch party for its limited edition Village Fable Gin. Saturday from 6:30 to 8:30 p.m., she will be at 421 Craft Bar and Kitchen.

For Rogers, it’s a way to play for family, friends and classmates who otherwise would have to make the 1,025-mile drive to Nashville. Her parents, Mike and Lisa Rogers, owned the Tastee Freez for years, having bought it from Madison Brewing and 421 Craft Bar and Kitchen owner Mike Madison. And the Rogers family has known Village Distillery co-owner Glen Sauer for years, she said.

“It’s perfect for family, like my grandmother, who can’t travel to the big shows. Only a couple of close family members have been able to make the trip,” she said. “So when I get home, it’s a cool jam session I get to have. It gives me an excuse to have everyone get together. It’s a lot less mess than having a fire in the backyard. And I love having an opportunity to help local businesses make some money.”

Rogers is particularly happy to play for her grandmother, Carol Prenoveau.

“She has always been my biggest champion. She was the first person to encourage me to sing in front of a crowd of people,” Rogers said.

While listeners will get to see and hear Rogers run through her songs this weekend, Edwards’ students got an even closer view — thanks to their detailed questions about Rogers’ writing process, her inspiration and heroes, and how she’s overcome obstacles along the way.

She doesn’t sugarcoat the hardships, saying money was tight when she first moved to Nashville on her own at the age of 17. “Also, the music industry can be pretty competitive,” she said.

“Filter out the negativity and believe in yourself,” she added.

She advised aspiring musicians to have a presence on social media, and to work hard at their craft.

“Practice makes perfect,” she added. “I taught myself guitar in college. I was a little bit obsessed with it. I was playing guitar for four hours a day for six months because I wanted to play on Broadway [in Nashville].”