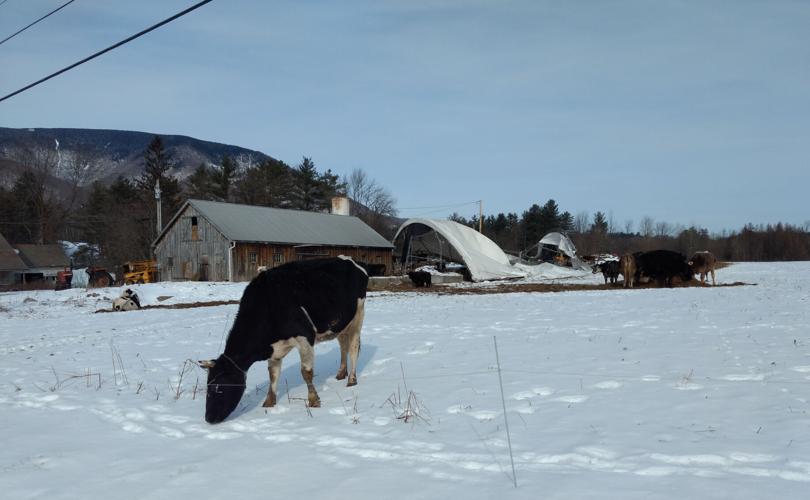 Cattle graze at Silver Spring Farm, better known as Wilcox Farm, on Thursday in Manchester. High winds hit the area overnight Jan. 17, and one of the gusts destroyed the fabric hoop barn at the farm. 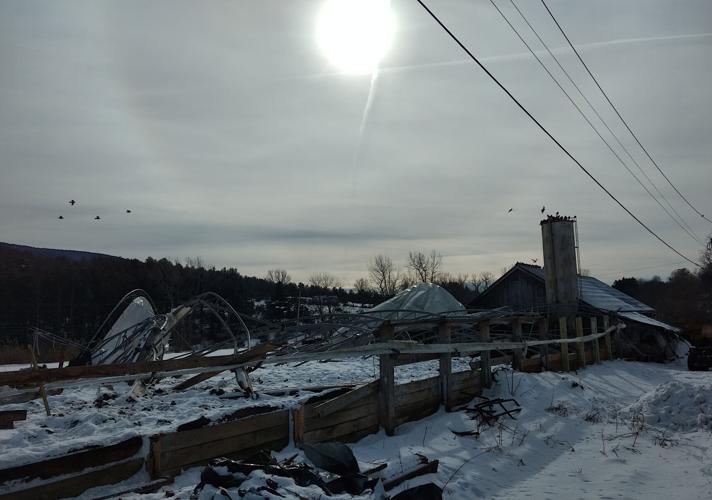 A wrecked fabric hoop barn at Silver Spring Farm, better known as Wilcox Farm, on Thursday in Manchester. High winds hit the area overnight Jan. 17, and one of the gusts destroyed the fabric barn. 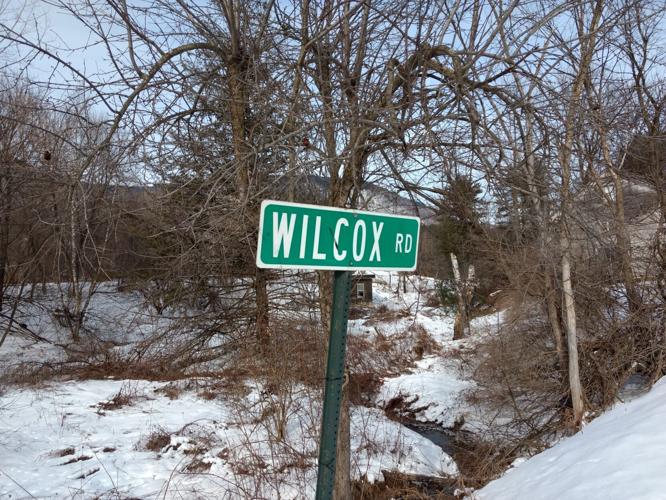 Cattle graze at Silver Spring Farm, better known as Wilcox Farm, on Thursday in Manchester. High winds hit the area overnight Jan. 17, and one of the gusts destroyed the fabric hoop barn at the farm.

A wrecked fabric hoop barn at Silver Spring Farm, better known as Wilcox Farm, on Thursday in Manchester. High winds hit the area overnight Jan. 17, and one of the gusts destroyed the fabric barn.

MANCHESTER — A fourth-generation Northshire farm is again trying to figure out how to keep going and wondering about the future after a windstorm destroyed the cow barn on the property.

Heavy winds hit Manchester overnight Jan. 17, and one of the gusts that morning destroyed the fabric hoop barn at the Silver Spring Farm, better known as Wilcox Farm.

The farm was home to about 40 cows at the time, mostly dairy cattle with some beef cows.

The hoop barn featured large metal arches that supported a stretched fabric. It provided additional shelter for the farm’s herd, beyond the wooden barn where the milking operation takes place.

Adam Wilcox said the wind hit the structure from a direction and force he hadn’t seen before.

“It just happened to catch it just right, and it just ripped it off,” he said.

The wind lifted the fabric and ripped the arches off, and broke the posts on one side. “It’s destroyed,” Wilcox said.

With sustained winds between 10 mph and 20 mph overnight through about 9 a.m., gusts were consistently higher than 30 mph, with a peak wind gust measured at 40 mph at about 8 a.m. on Jan. 17, according to Weather Underground.

With room for only 16 cows in the milking barn, Wilcox had to make some hard decisions. He sold a few head that hadn’t been producing much milk, which “I probably shouldn’t have been keeping anyway,” Wilcox said.

He also sent 15 younger cows that weren’t making milk yet to Taylor Farm in Londonderry.

That left him with 16 he has room for and some beef cows that can still find shelter under what remains of the destroyed hoop barn. ”I kept the ones that were making the most milk,” Wilcox said.

Jonathan Taylor, of Taylor Farm, said taking in some of Wilcox’s cows is just what small farm owners do for each other.

“I’ve helped Adam out numerous times, and likewise he’s helped me,” Taylor said. “We’ve got about 15 of his animals up here now to give him time to figure out what he’s going to do.”

That’s up in the air right now, Wilcox said, but he has a plan in mind, and it does not involve shutting down the farm.

The future might not be so heavily reliant on dairy cattle, and Wilcox said he’s working with a friend on some things that, a year from now, will hopefully have the farm a little more profitable and not require so much work to keep it going.

He said he gets up early and tends to farm chores until about 10:30 a.m., and then he goes to work. He comes home about 4:30 p.m. and works around the farm more.

“It’s been a rough go,” Wilcox said. “Dairy is just getting so hard to do. I’m just trying to find a way to make ends meet, other than milking cows.”

For something that is so quintessential Vermont, the small, family dairy farm is on the verge of extinction.

Wilcox, 43, is the fourth generation to make a go of the business, following in the footsteps of his great-grandfather who started the farm in 1898 and passed it on to his grandfather and father.

But none of his family predecessors had to face stagnant milk prices the way he has.

But by the price of milk, he means the price he gets paid for the milk he produces, while the cost of doing business has continued to climb.

“That’s what’s super frustrating,” Wilcox said. “The price in the store is going up, and everybody thinks you’re making money, but we’re not getting any more for it. That’s why smaller farms are disappearing.”

Taylor knows what Wilcox is talking about.

“It’s an extremely tough situation for anyone to go through,” Taylor said. “My heart goes out to Adam.”

Taylor got out of the dairy business a handful of years ago and now runs an agritourism business based on cheese produced on the farm, as well as other local products in a farm store. There are farm babies to see in the spring, wood-fired pizza and bagels with live music during the summer, fall with postcard-like opportunities, and winter sleigh rides and bonfires.

All the while, the farm is continuing sustainable agriculture practices.

Taylor said there were once 3,800 working dairy farms in Vermont, and now there are about 500.

And Taylor knows what it’s like to lose a barn, but in Taylor’s case it was snow load that collapsed his barn.

“These are big structures, and as farms attempt to grow, you get into these bigger and bigger buildings,” Taylor said. “Our building wasn’t really designed for the snow loads we get up here. We’ve made some significant improvements.”

Wilcox said that when he lost his barn to a fire about 20 years ago, he simply didn’t have money to rebuild, so the hoop barn was the most affordable way to get his cows under shelter.

“At the time, we just couldn’t afford another [barn],” Wilcox said. “It’s what we had to do to give [the animals] cover.”

Wilcox said he knows the fabric superstructure wasn’t terribly popular with the neighbors, and he also knows many aren’t happy with the way the place has not been kept up.

He said working a full-time job away from the farm and the inability to afford to hire help means the property isn’t as nice as he’d like it to look.

“It’s been hard to keep neat and tidy. I hear things,” Wilcox said. “I know there’s a lot of support, but things have gone downhill. It’s not too easy.”

Wilcox didn’t give any details on his new plan, but it might be something modeled more after Taylor Farm’s diverse offerings, the likes of which have kept many family farms from being sold off to be developed.

One option is to put more of the 125-acre farm into a conservation easement.

Currently, 30 acres are in an easement, and Wilcox said he’ll be looking at conserving the remainder of the property.

There also will be more of a focus on beef, something Wilcox started doing about 10 years ago, selling meat to local restaurants and through a farm stand.

“I want to try to keep the farm going,” he said. “I still like the cows. I just need to look at it in a different way.”

He wanted to assure the community that he will be cleaning up the property and has plans to remove the destroyed hoop barn with the help of Brent Herrmann, of Herrmann Construction, who has offered his excavator to assist.

He also wants to thank those who have helped over the years.

“There are so many people in the community who have helped, and I can’t thank them enough,” Wilcox said. “I don’t really need help right now. I just want to regroup myself. But there may come a time.”

A chance to regroup is exactly what Taylor said he’s offering Wilcox. “It buys him a little time to figure out what his next step is,” Taylor said, adding he’s earned it.

“Farmers have dedicated their lives to these farms,” Taylor said. “It’s what you’ve done all your life, and it’s hard to think of doing anything else. You get attached to your animals and attached to the way of life. To let go of all that is very, very difficult. You shift and recreate yourself, and Adam is in that process right now.”