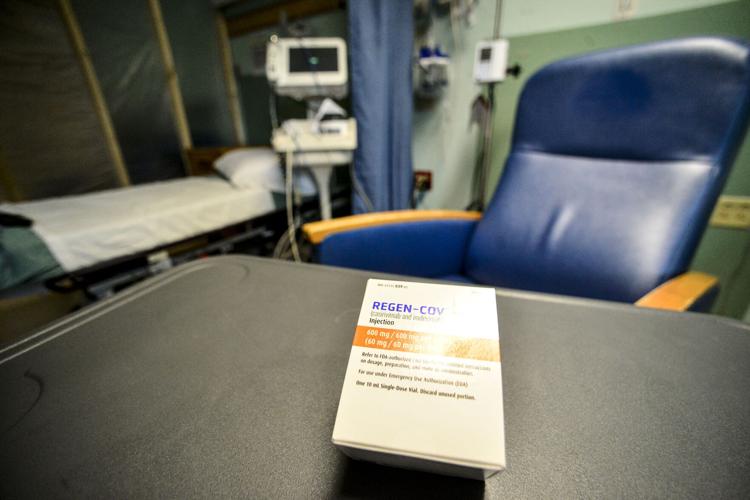 A box of Regeneron 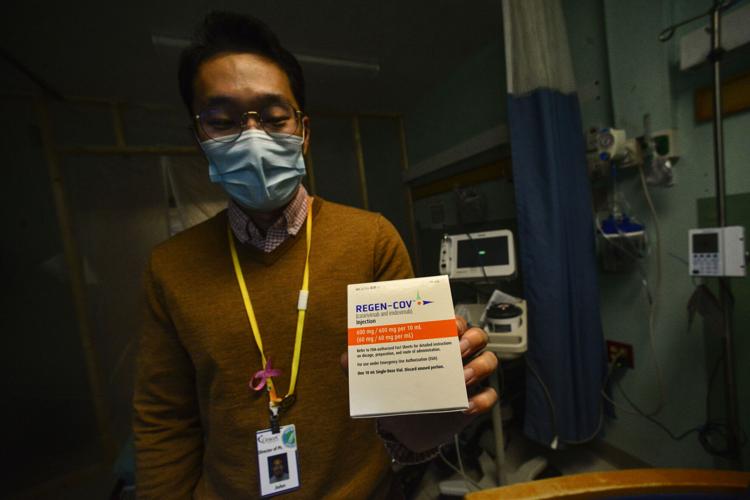 Dr. John Kim, director of pharmacy for Grace Cottage, in Townshend, holds a box of Regeneron, a monoclonal antibodies to combat COVID-19.

A box of Regeneron

Dr. John Kim, director of pharmacy for Grace Cottage, in Townshend, holds a box of Regeneron, a monoclonal antibodies to combat COVID-19.

A number of hospitals throughout Southern Vermont are treating certain patients with monoclonal antibodies to combat COVID-19.

“It’s very safe to give and better than nothing,” said George Terwilliger, chief medical officer. “We thought we would offer it. We have been nimble enough to offer it, and we have a negative pressure room we’ve been using.”

“Negative pressure” means air pressure is lower in the room, with the intent of promoting air flow inside and keeping viruses from escaping.

Grace Cottage has been offering an antibody treatment for about a year, initially Eli Lilly’s combination of bamlanivimab and etesevimab. Recently, it switched to Regeneron Pharmaceuticals’ combination, casirivimab and imdevimab.

“We have now given a total of 30 doses of the REGEN-COV product, about two-thirds in the hospital and one-third at Centers for Living and Rehabilitation, where SVMC provides doctors,” he said.

The FDA issued an emergency use authorization for the two drugs in November 2020 for the treatment of mild to moderate COVID-19 in adults and pediatric patients 12 years of age or older.

“I was recently treated on an outpatient basis for COVID at a Windham County hospital,” wrote a patient in a letter to Vermont News & Media, which is protecting the patient’s identity. “I had tested positive for COVID on a home test kit. I then called my doctor who screened me for symptoms. I was told to call the hospital for an appointment. I was given an appointment for the next day and told to call from the hospital parking lot by cell phone when I arrived.”

The patient was met at Grace Cottage Hospital by a nurse wearing personal protective equipment, who came out to that person’s car and then confirmed the positive test with a hospital test.

“She escorted me into a room that’s used for infectious patients,” wrote the patient, who received a 20-minute infusion followed by a 60-minute observation period. “I was seen by a doctor. I was then escorted back to my car and told to quarantine at home for 10 days.”

Terwilliger said people who qualify for the treatment are those who might have a compromised immune system or have underlying health conditions such as age, diabetes or obesity.

“It’s indicated for people with mild to moderate COVID, such that they can stay home while they recover,” he said.

It’s most effective when administered as soon as a positive test comes back to prevent the virus from getting worse and requiring hospitalization.

“It’s not a miracle drug,” Terwilliger said. “But if I had a bad medical condition and it was available, I would want it.”

“The only side effect I experienced were several days of occasional low-grade fevers and sweats, probably due to the war between my new antibodies and the COVID virus particles in my body,” stated the letter writer. “Now I feel great and I’m very thankful that this treatment was available close to my home.”

If the treatment is not administered within 10 days, Terwilliger said, it’s ineffective.

“And if they are sick enough to get admitted for in-patient care, it’s too late,” he said. “They will get anti-virals and steroids.”

Terwilliger said those who test positive should contact their doctor right away and ask if they qualify for the treatment.

Grace Cottage will also take patients at its emergency department, but prefers that people let the care providers know they are coming.

“An ER visit can be a little pricey,” Terwilliger warned. “But anyone who has something serious should come to the ER and get it checked out.”

While the antibodies are paid for by the federal government, the treatment can result in charges to private insurance or Medicare and Medicaid, and the resulting co-payments.

Patients who test positive but otherwise are feeling OK and don’t have any underlying medical conditions will not receive the treatment, Terwilliger said.

The intent of giving the antibodies is to prevent the infection from getting so serious it requires hospitalization, Terwilliger said.

Another category of people who might qualify for treatment are those who had an allergic reaction to a COVID-19 vaccine shot, an event that has not yet occurred at Grace Cottage, Terwilliger said.

“But we keep the epinephrine handy,” he said.

Adverse reactions are reported to and maintained by the CDC’s Vaccine Adverse Event Reporting System, said Ben Truman, spokesman for the Vermont Department of Health. Allergic reactions are hard to officially track because they are not defined in the system, he said.

“Importantly, anyone can report an adverse event,” Truman said.

An adverse event is defined as death or life-threatening reaction, hospitalization, an inability to return to normal life, a birth defect or an immune system response.

“[The CDC’s reporting system] is not designed to determine if a vaccine caused a health problem, but is especially useful for detecting unusual or unexpected patterns of adverse event reporting that might indicate a possible safety problem with a vaccine,” the CDC’s website states. “This way, VAERS can provide CDC and FDA with valuable information that additional work and evaluation is necessary to further assess a possible safety concern.”

Dobson at SVHC said the monoclonal antibodies are not the answer to fighting the pandemic because they’re too expensive, too cumbersome and too resource-intensive.

“It’s just not sustainable,” he said. “What we need are inexpensive oral antivirals that have few side effects and have ample supply. My own personal view is that the answer to getting out of this pandemic and moving to an endemic state is increasing vaccination rate, increasing inexpensive, ubiquitous testing, and potential use of oral antivirals. If we can do that, COVID-19 will become a background respiratory illness.”

In Vermont, there have been 1,586 adverse events reported to VAERS through Sept. 24. That’s a rate of about 0.17 percent of all vaccinations in the state. As of Wednesday, 916,000 doses have been administered to nearly 487,000 eligible Vermonters, and, excluding those 12 and under, nearly 80 percent have been fully vaccinated.