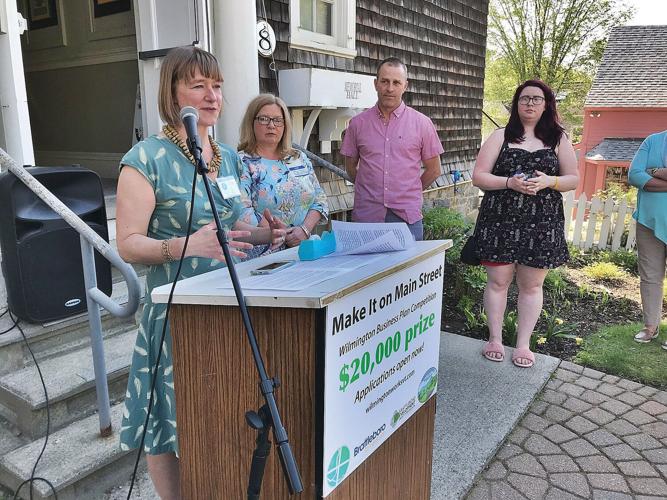 Meg Staloff, former program coordinator for downtown organization Wilmington Works, announces the Make It On Main Street contest in May 2018. 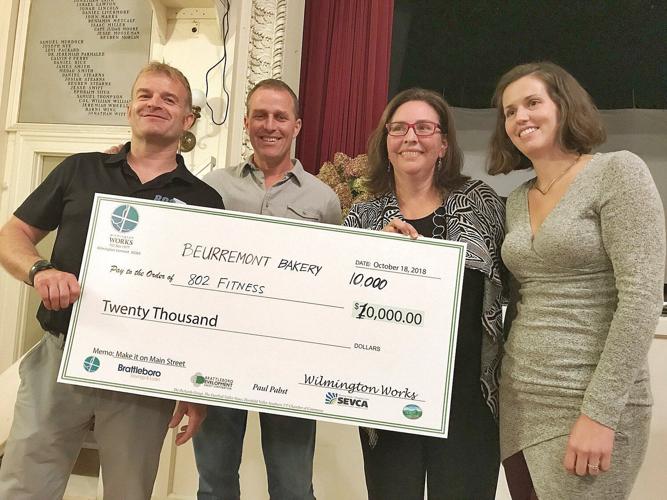 Paul Croutworst, from left, Paul Pabst, Lisa Sullivan and Hannah Cofiell pose with the check for the Make It on Main Street business plan contest in 2018.

Meg Staloff, former program coordinator for downtown organization Wilmington Works, announces the Make It On Main Street contest in May 2018.

Paul Croutworst, from left, Paul Pabst, Lisa Sullivan and Hannah Cofiell pose with the check for the Make It on Main Street business plan contest in 2018.

“It did seem like it was a little bit of a catalyst for some new energy in town, which was great,” said Lisa Sullivan, a member of the downtown organization Wilmington Works board. “You hope that there will be that sense of energy and excitement but realistically, you think you might just fund whatever business gets funded, and that also is a great outcome.”

The competition invited entrepreneurs to submit their plan for a brick-and-mortar business between May 24 and July 16, 2018. Semifinalists were selected, assigned a business development mentor and asked to produce a full business plan by Oct. 1 that year. After an oral presentation Oct. 18, the plan was to have a winner land a $20,000 grant, with an opening in downtown Wilmington within the year. Judges chose two winners to split the sum.

Having some distance from the project now, Sullivan said it’s been “really effective in jumpstarting some new economic activity.” She was involved in planning for the contest and sat on the judges panel.

Gretchen Havreluk, economic development consultant for the town, said the contest had a snowball effect, although it didn’t work out how she initially expected.

“I really thought that we were going to get a business on Main Street to redevelop one of those buildings,” she said, noting that $20,000 doesn’t go very far in such projects.

She said she appreciates Paul Pabst’s contribution to make the contest happen.

Pabst, executive producer of ”The Dan Patrick Show,” lives in Connecticut and has a second home in Wilmington. He donated earnings from “Sports Jeopardy.”

Butter Mountain Bakery (formally known as Beurremont) and 802 Fitness and Therapy split the $20,000. Both are in the Old School Community Center. That helps to keep the community center going, Havreluk said.

“So that was great,” she said.

The owners of 1a Coffee Roasters were part of a larger group looking to bring a coffee business to the downtown. Wilmington Works agreed to provide $10,000 from its coffers once a location was finalized.

1a eventually purchased a building at 123 West Main St. Being outside of the designated downtown, the business didn’t qualify for the contest funds but recently celebrated its second anniversary since opening in Wilmington.

The owners of 1a teamed up with another business to open Starfire Bakery in a neighboring building earlier this year, then established a team to purchase the Old Red Mill Inn to house Valley Craft Ales and offer pizza and lodging.

“It gives a real boost to the economy,” Havreluk said.

She described being “really disappointed” when the judges decided to split the money up, because it made her work more difficult. Instead of helping runner ups open up in town, she assisted all three of the winners with more limited funds.

Paul Croutworst, owner of 802 Fitness and Therapy, said the contest “helped get everything started.” He had been operating out of a yurt downtown and moved into the community center, where his business was shown to other commercial entities interested in space.

Understanding that splitting the $20,000 was for the greater good, Croutworst noted $10,000 to build a gym wasn’t “a ton of money. That literally just paid for my body compensation analysis machine.”

“Everybody was great,” he said. “It was a positive experience. I would do it again.”

Croutworst had to get creative during the COVID-19 pandemic, lending out equipment for members to use at home. He remembered teaching husbands how to adjust their wives’ backs.

Now, he’s at a point where the gym has a busy schedule, and he needs to find more staff to expand. Classes and therapy offerings are specialized.

Havreluk said she believes the town received some good publicity out of the contest — multiple news outlets covered the contest. She reported an uptick in local 1 percent option tax revenue since the contest, but she’s not sure if it’s a false positive, because things have increased in cost.

Every week, she said, she receives calls from people who are interesting in a building or opening a business. However, she noted, Red Fox Shop and Norton House Quilting have recently shut their doors.

“They closed for different reasons, not due to the lack of economy,” she said. “Those were just circumstance. But we still need to fill those.”

Havreluk doesn’t think she would want to host another business plan contest again. She said it is a lot of work to put together and not guaranteed to bring the desired results.

There hasn’t been any initiative within Wilmington Works to hold another contest.

“But personally,” Sullivan said, “I think it worked really well. So maybe it’s something we should consider.”

Sullivan said she’s “thrilled” by the way the contest has affected the town. She also noted how 1a and Valley Craft Ales co-owner Melissa Boyles, Chrystal Holt’s sister, is now the program coordinator for Wilmington Works.

“So there’s a lot of far-reaching great things that have happened,” Sullivan said.

Pabst recounted how Havreluk and Sullivan liked his idea for a business plan contest right away.

“They had the hard work of putting this together and dealing with the submissions,” Pabst said.

All parties agreed that businesses should be in the best interest of locals first, then skiers and tourists, Pabst said. He described all the resulting businesses as fitting that rule.

The Old Red Mill Inn is the first place Pabst stayed when he first visited Vermont from Chicago in the 1990s. He called it a “centerpiece of downtown.”

Pabst recently stopped by the Old Red Mill Inn. Brian Holt, co-owner of 1a and Valley Craft Ales, said he told Pabst he “would not be standing here talking to you if you didn’t make that donation. Who knows where I’d be?”

The Holts were living in Finland and visiting Amsterdam when they came across an ad on Facebook for the contest. Brian said he didn’t think anything of it at the time, but the next day, he proposed entering the contest.

“Then all those events waterfalled into all these projects and our full-time life being in Wilmington,” he said. “We sold all of our other properties. We’re all in in Wilmington.”

Prior to the contest, the couple had no connection to Wilmington. Brian said his family had driven through to go skiing in his childhood, but they never stayed in town.

Initially, Brian Holt was captivated by how much Wilmington reminded him of Finland. He said both places value the environment and social support.

“I’ve lived everywhere from Helsinki to Las Vegas to California,” he said. “What I’ve observed over those 20 years of traveling the world is I want my kids to grow up in a place like Wilmington, where they’re not overstimulated by all the things that happen in society that [are] unnecessary.”

For now, Brian Holt said he feels “pretty confident” the three projects on his plate are enough to keep him busy. He stressed the importance of offering “elevated” products and services to attract visitors to the areas.

A new generation of business owners shares a philosophy that there’s “plenty for everyone,” he said. They’re not competing for customers.

“You need to have options,” Brian Holt said. “You can’t just have one place.”