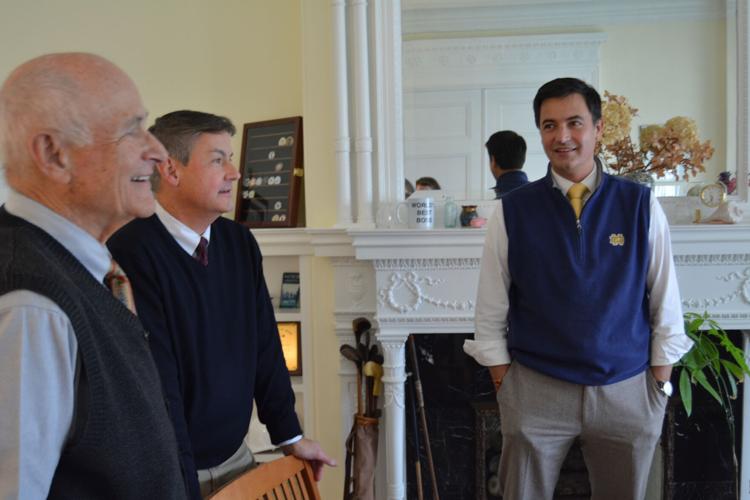 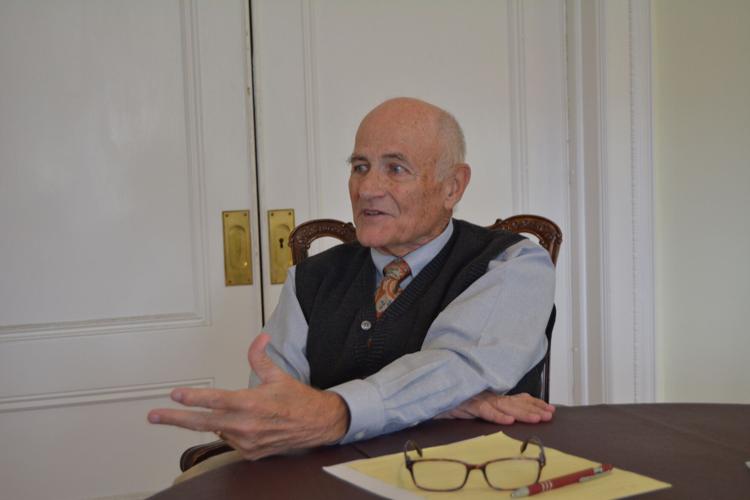 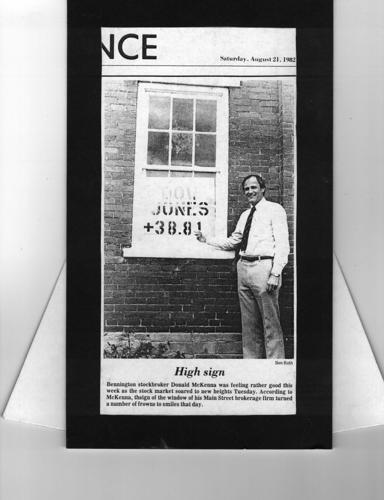 The stock market "was up, I think it was 39 points. And that was such big news. The paper came down and took a picture of me out front," said Don McKenna.

The stock market "was up, I think it was 39 points. And that was such big news. The paper came down and took a picture of me out front," said Don McKenna.

BENNINGTON — The McKenna’s have been a staple in Bennington since 1982. Forty years later, the family owned and run business is still helping locals reach their financial goals.

D. B. McKenna & Co., Inc. is a long running investments and financial planning business on Main St. It was founded by Donald McKenna.

Before he started this company, Don grew up in central Connecticut. He moved to the Bennington area in 1971 while he was part of a management team at Stanley Tools. He worked for a few other companies before deciding to go out on his own.

About three weeks before his youngest son, Brian, was born, Don decided it was time for a change, and he “started from scratch.”

“It just went from nice income to no income,” he said last week. Thankfully, his wonderful and very pregnant wife was “so supportive.”

“She gave me all the encouragement in the world," he said. "And the first year was profitable, but I practically could have carried all the money in my pocket.”

While Don started his new business, his wife Melanie ran the household.

"Yeah, she did a lot of family planning for trips, vacations that, you know … I never had the ability to take the time off. But she made sure it happened,” said Don.

Don started the business on an upswing right after the bear market of 1981.

“When the markets are going on up, it's easy to look like a genius or superstar, you know," he said. "When you really earn your keep is when the markets go on down.”

The company grew slowly. The business opened in February of 1982 and tax season began in March. Don started the company by filing a lot of taxes. Then, he had to start pushing for business. He admitted he’s not the best sales person in the world, but he was able to sell the “honesty and trust” that he instilled in his company. “[I] always did, you know, what I felt was best for the client.”

To gain clients, Don searched through the phone book, but he “also drove to the back roads, got names and or ID numbers off of mailboxes and sent letters signed out to people.” Don said, “It just slowly grew.”

Although Don’s seen major firms come and go over the years, the McKenna family stayed. The company grew large enough and it “now supports three families,” said Don. Out of the four boys Don and Melanie had together, two decided to step into the family business.

Michael McKenna came into the company 28 years ago, and Brian McKenna joined 17 years ago. Don said Brian has picked up clients and all the operational responsibilities, and Mike has clients of his own. Don still works with his clients, but when he’s ready to take the plunge into retirement, the business will be taken care of.

“We get paid to help people, which is awesome,” said Mike. “We help people plan for retirement or for college, saving for college or helping them reach their financial dreams. That sounds like a commercial, but we actually help people.”

“You know, when dad started this, people were still getting pensions, you had Social Security. And then the idea of doing the investments was if you had the money that was above and beyond,” said Brian. “You fast forward to today, you know, most folks don't get a pension. They're responsible for their own retirement, they have a 401k that they're responsible for. And it gets more and more complicated every year.”

The whole family goes the extra mile to understand their clients and their long term financial needs. Don said, “I've always taken the approach that ... you have to really learn the person and understand the person and then try to structure something while working with them is gonna give them a comfort level.”

The McKenna’s treat every one of their clients with the same level of importance, Don said.

“You know, the one with a smaller amount of money, that probably means more to them,” he said.

The company has been around long enough to help families for generations. Some of their clients have adult grandchildren who have become clients.

Although it’s been 40 years, the McKennas are confident they’ll be here for the next 40. Don said, “We'll be here.”